A nonprofit news organization covering the U.S. criminal justice system
Local Network
Cleveland
Projects
Life Inside
News Inside
Mauled
The Language Project
The Record
The System
Topics
Death Penalty
Immigration
Juvenile Justice
Mental Health
Policing
Politics and Reform
Race
About
About Us
Local Network
News & Awards
Impact
People
Supporters
Jobs
Newsletters
Events
Donate
Feedback? support@themarshallproject.org
Just about every day, migrants walk across the Gateway to the Americas pedestrian bridge from Mexico to Laredo, Texas, to approach U.S. customs officers, saying they are afraid to return to their home countries. That act starts the legal process for them to apply for asylum. In October 2017, a couple from India had their first encounter with a customs officer at the bridge. In the last three months of 2017, about 4,000 people each month came to border stations in Laredo asking for protection. Kirsten Luce for The Marshall Project
Updated 6:00 a.m.
The Frame

By Julia Preston and Celina Fang

Kirsten Luce did not have an easy assignment when she traveled to the border city of Laredo, Texas. She traveled with Julia Preston of The Marshall Project and a producer from This American Life to report a story about an immigration court, but photographers are not allowed to shoot in the court or inside the detention center where it is located. Still, Luce, who has worked along the border for 12 years, quickly saw an opportunity to capture the cycles of migration playing out in Laredo.

At the U.S. border station, she found a rare image of the moment when two migrants, a couple from India, approached an officer to ask for asylum. Like other asylum seekers, they would be be taken to a detention center, their first stop before their case heads to immigration court, where only some win their cases.

In another moment, she saw Mexicans being deported from Laredo, delivered in shackles to a bridge to walk back across the Rio Grande, even as everyday Americans and legal immigrants were moving back and forth between the countries, a constant flow of life in a border town.

Luce began her career as a staff photographer at a regional newspaper in McAllen, Texas. Now based in New York, she returns often to Texas and Mexico to pursue stories about immigration, including a piece for Bloomberg Businessweek about the no-man’s land north of the border and south of the wall. Her work on immigration has appeared in Harper’s, The New York Times, National Geographic, and in European publications.

They knew that busloads of deportees were dropped off and escorted over the bridge to Mexico where they are left to their own devices. Luce and Preston asked around in Laredo to find out where exactly the deportations happen. They were given a general area but had no idea when it would happen, so Luce was prepared to wait all afternoon. After only a couple hours, she saw a bus arrive with the deportees. Since this all happened on public property, officials couldn’t stop her from photographing the process.

“As a journalist, I think it’s more important than ever to seek more transparency in this process so that Americans understand how our immigration laws are being interpreted and applied, “ said Luce. “Millions of lives are affected by these processes, and it’s important that we understand them and report them accurately.” 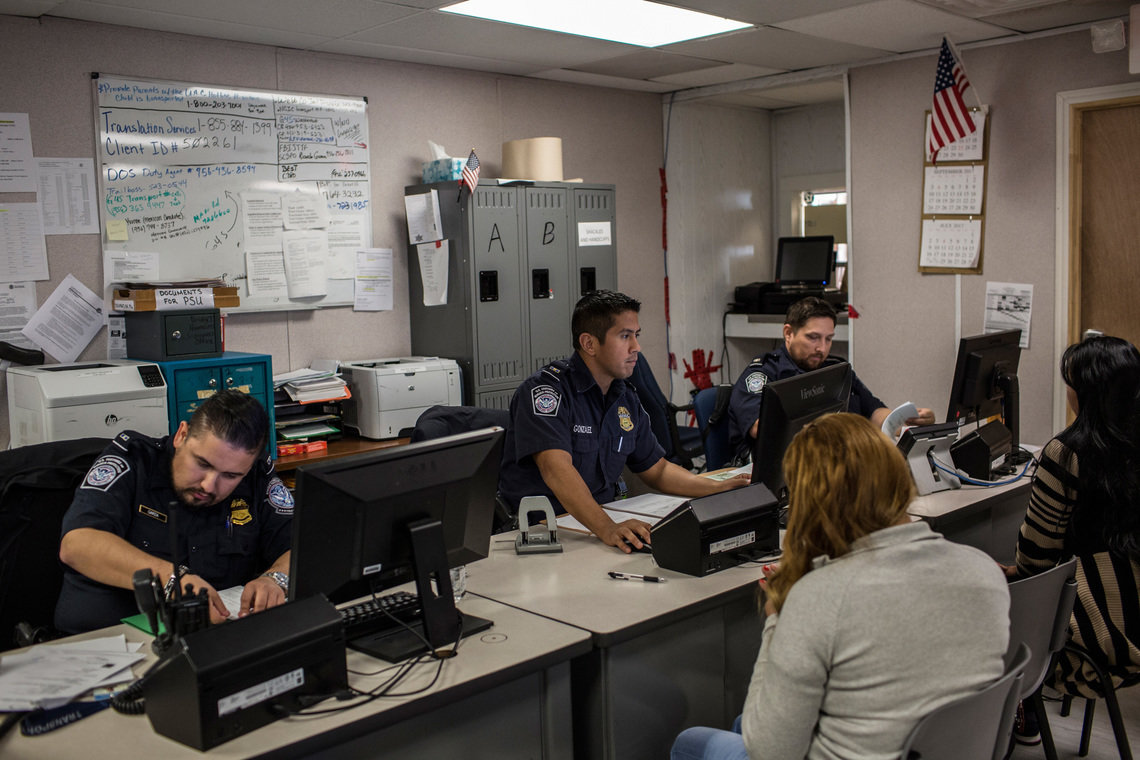 From the bridge, migrants are taken to a nearby office where Customs and Border Protection officers ask their names, check databases for any criminal or terrorist history, and interview them to learn more about their fear of returning to their countries. Although the numbers of asylum-seekers were down in 2017 from the previous year, the office is always busy. Two women from Cuba told officers why they did not want to go back to the communist nation. 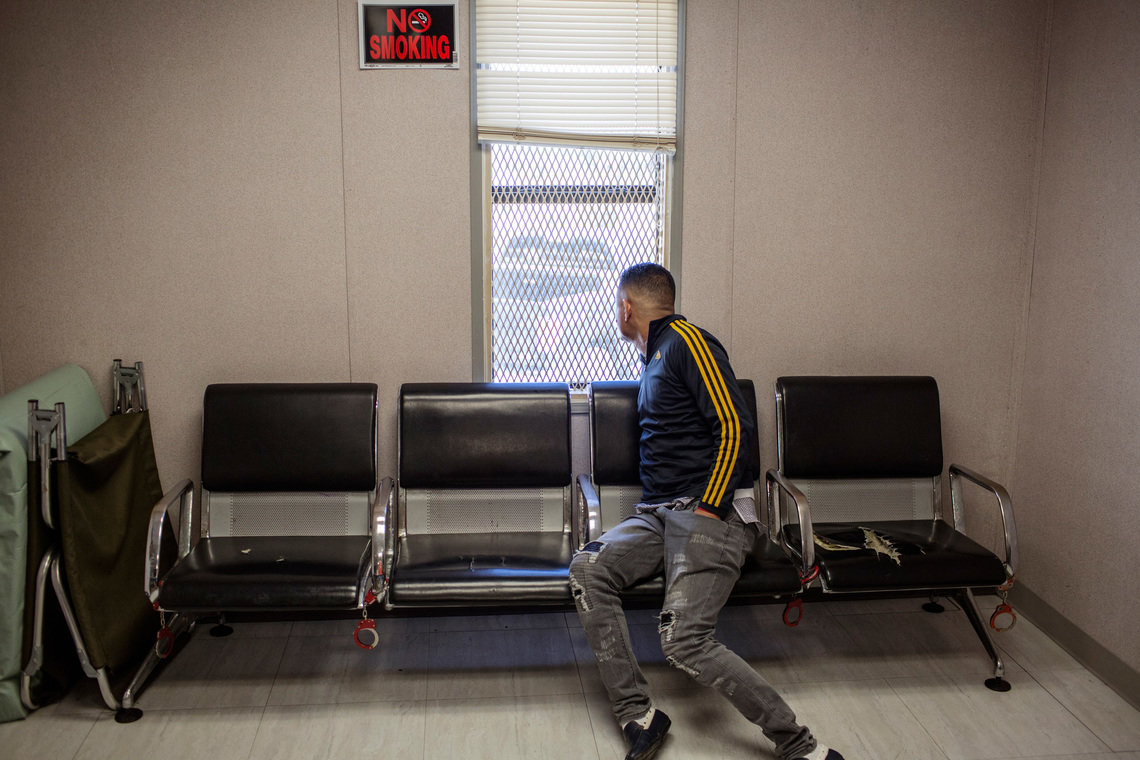 Many migrants seeking asylum are dismayed to learn during their first interview with Customs and Border Protection officers in Laredo that they will be detained, and under Trump administration policies they may not be released for months while immigration authorities decide their cases. 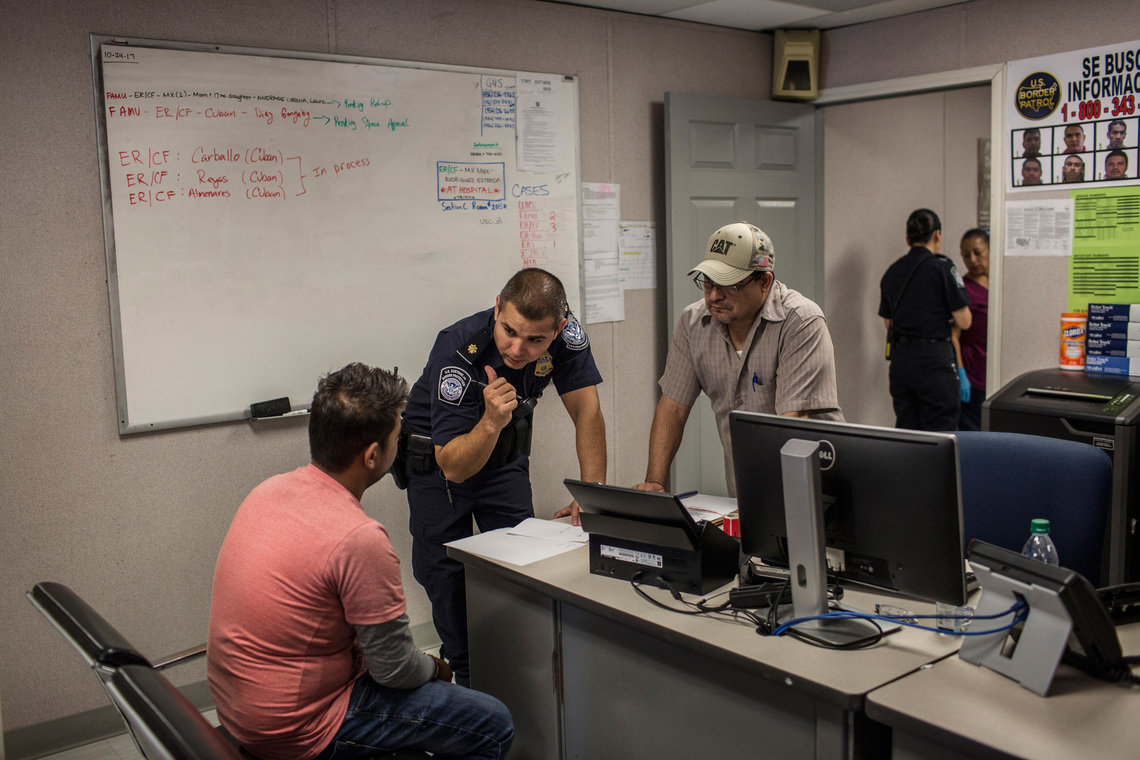 Customs and Border Protection officers tried to communicate with a man from India who came with his wife to the border station in Laredo, with no entry visas, in October 2017. The officers used a mobile phone app to identify his language — Gujarati — and then conducted a basic interview to learn his name and why the couple feared returning to India and wanted to stay in the United States. 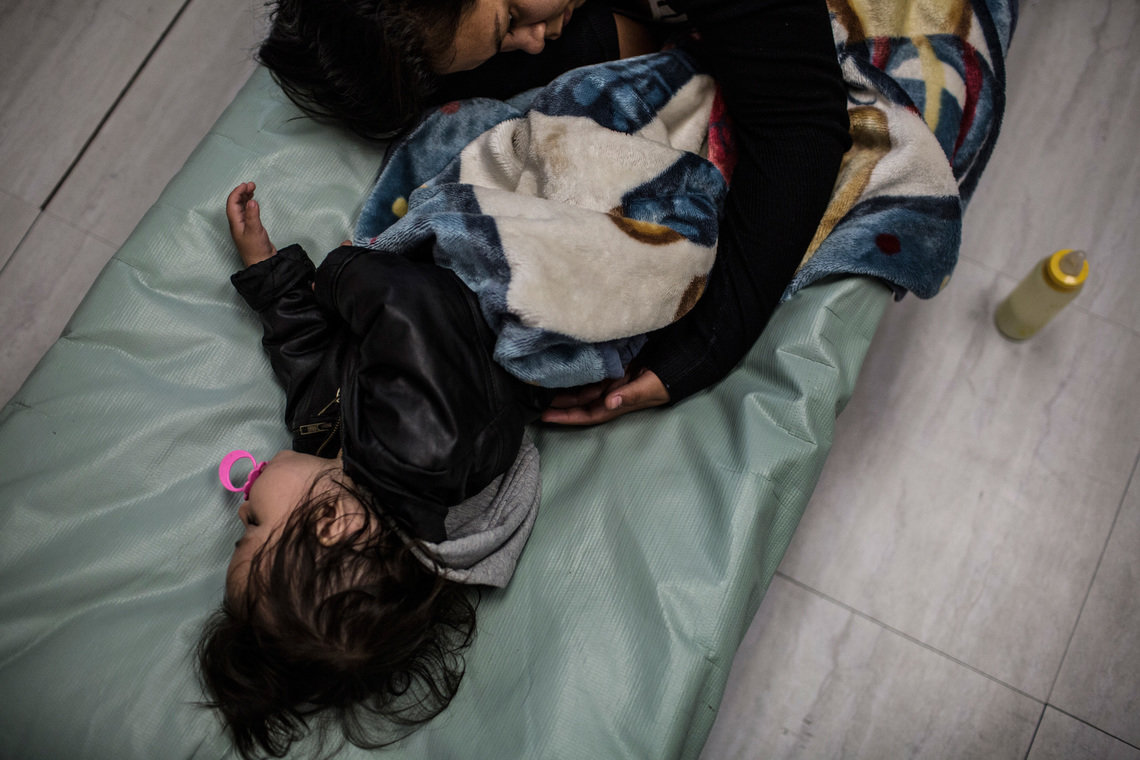 Women with children who seek asylum are sent to two detention centers in Texas designated for families. Customs and Border Protection has no holding cells at the port of entry in Laredo. A mother from Guanajuato, Mexico, had told officers she was in danger there. She and her 1-year-old daughter would rest overnight on a cot in the office near the bridge and would be sent to a detention center in the morning. 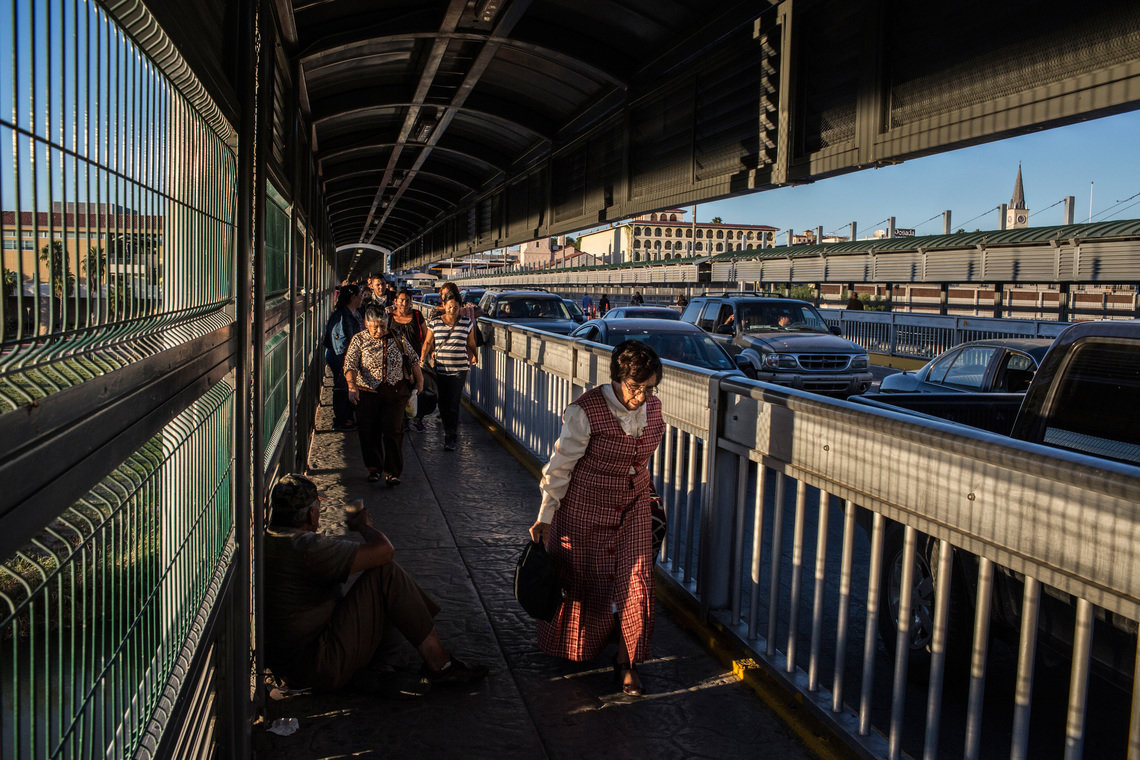 There is a constant flow of people, cars and commerce between Laredo and its twin city in Mexico, Nuevo Laredo. Many people live in Mexico and come over daily for work or school in Laredo. Often they have border crossing cards that allow them to enter the United States easily. On an October afternoon, people walked across the Gateway to the Americas bridge returning to Mexico. 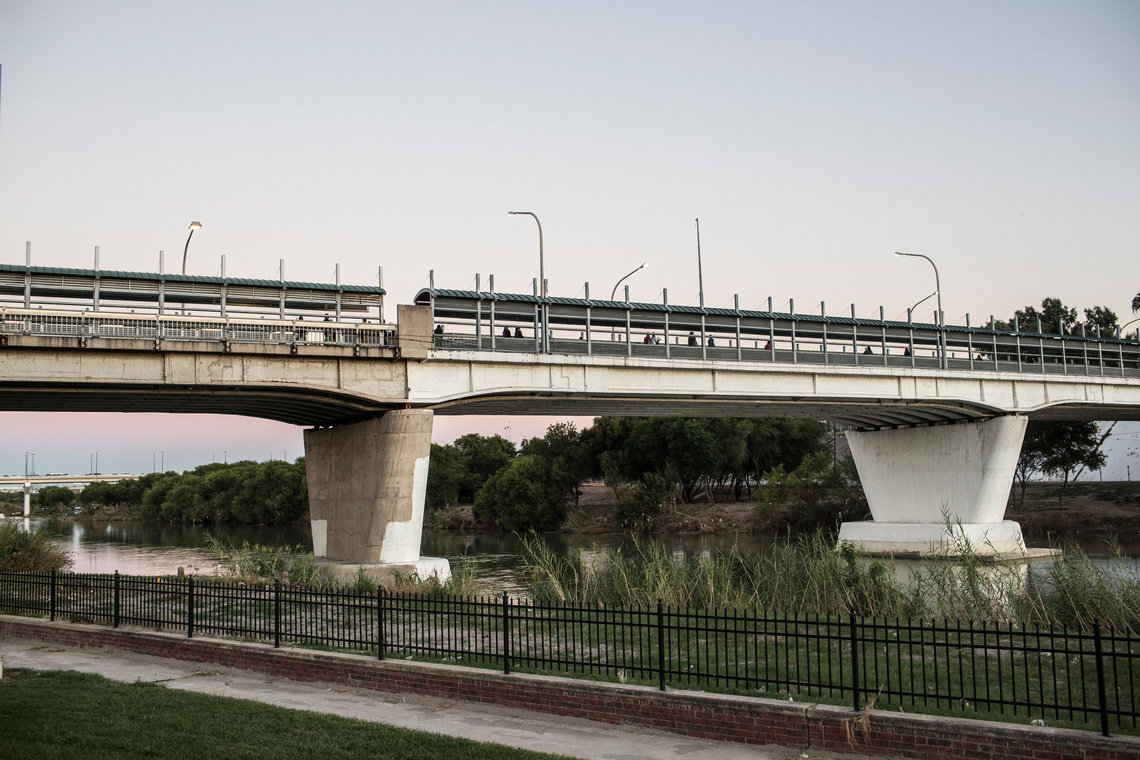 Thousands of people come and go across the Rio Grande on Gateway to the Americas bridge every day, in cycles of legal immigration and trade that bind Laredo (left) to Nuevo Laredo, its twin city in Mexico. 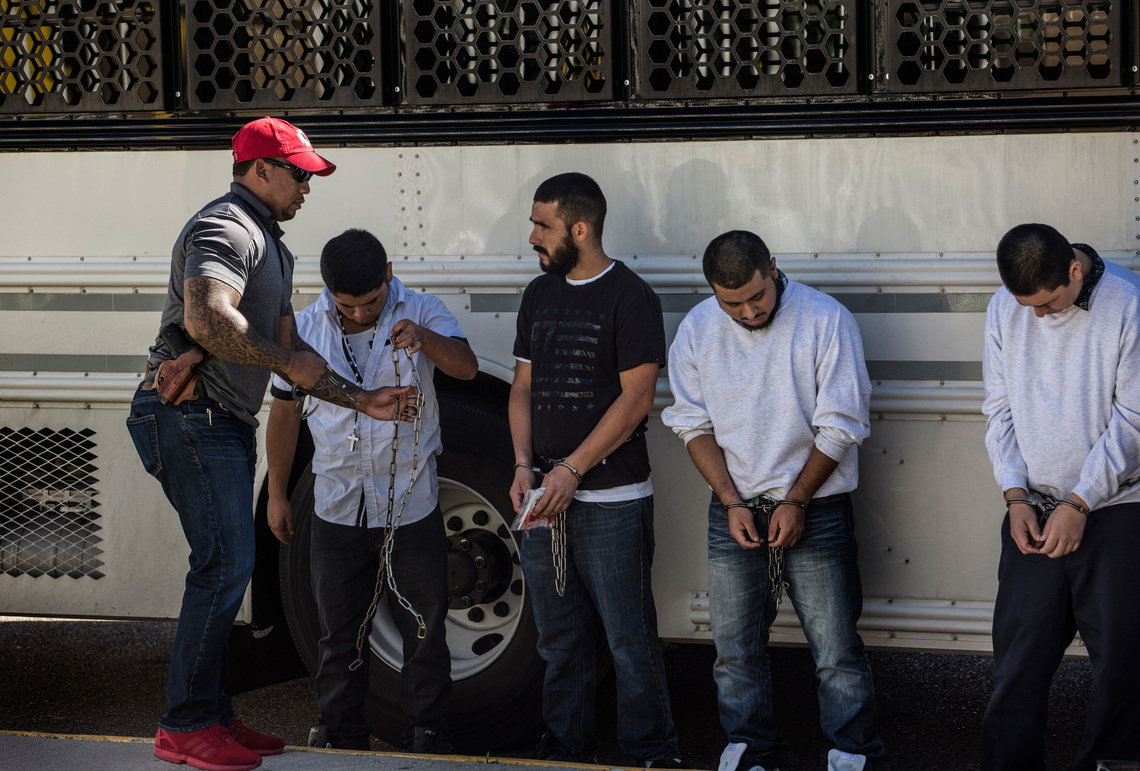 There is another regular cycle in Laredo: the daily deportations of Mexicans who were caught crossing the border illegally or living in the United States without documents, or whose claims for asylum were denied by the immigration court. Immigration and Customs Enforcement brings them in buses from detention centers in Texas to the Juarez-Lincoln Bridge. Their shackles are removed and a gateway is opened so they can walk back across the bridge to Mexico. 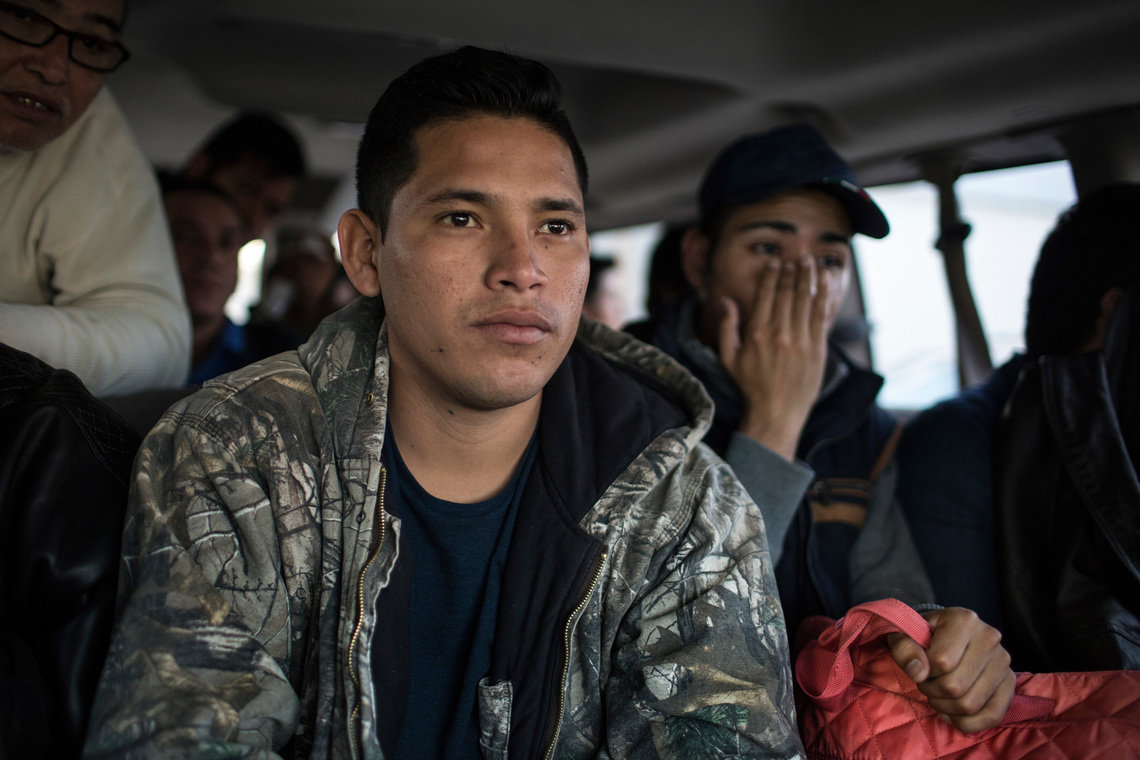 After deportation, Mexican migrants are often disoriented, struggling to devise new plans as they give up their hopes for advancement in the United States. Just after being deported from a detention center in Laredo, Luis, 23, of Campeche, Mexico, takes a van to the Instituto Tamaulipeco, a center that helps migrants get home within Mexico.