Did a prosecutor lie about whether the family of a murder victim wanted the death penalty?

A decade ago, Paul Storey was found guilty of murdering 28-year-old Jonas Cherry during the robbery of a putt-putt golf course in Fort Worth, Texas. “It should go without saying,” a prosecutor told the jury, “that all of Jonas’s family and everyone who loved him believe the death penalty is appropriate.” And that’s what Storey received.

Cherry’s parents opposed the death penalty. Storey’s current lawyers say that the prosecutors misled the jury about that fact, and also failed to tell Storey’s original defense team, who might have used the parents’ opposition to convince the jury to spare his life. Last April, the Texas Court of Criminal Appeals in Austin stopped the execution and ordered a judge in Fort Worth to dig back into the scattered and conflicting memories of the courthouse players. A dramatic pair of hearings followed last fall, and now the judge will soon give a recommendation about Storey’s fate to the court in Austin, which has no deadline.

The dispute is a window into the unresolved role of victims in decisions about punishment. The Supreme Court has said they can get on the witness stand and describe the impact of the crime, but they can’t ask the jury for a specific punishment. Prosecutors often solicit their views before advocating a particular punishment or offering a plea deal, though they are not beholden to their wishes. Judges have been publicly celebrated for listening to victims (see: Larry Nassar) and castigated when they are believed to be ignoring them (see: Brock Turner).

The lack of clarity means it can get sticky when victims and their families have views that prosecutors consider atypical — like an opposition to the death penalty — or when they don’t all agree amongst themselves. And if a prosecutor misleads the jury about what they want, should the sentence be thrown out?

At the hearings on Storey’s appeal last fall, prosecutor Christy Jack got up on the witness stand and admitted that the line about “everyone who loved” Jonas Cherry wanting the death penalty was an exaggeration, if only because she did not systematically survey his family and friends. She knew the parents didn’t want the death penalty, she said, but Suman Cherry, the victim’s widow, supported a death sentence. And, in her memory, the Cherry parents briefly changed their minds. After the defendant’s mother testified and asked the jury to spare her son, as Jack remembered it, the victim’s father Glenn Cherry offered to testify in response and say he now wanted Storey to be executed.

But to hear the parents tell it, nothing of the sort took place. “We didn’t change our mind and they never asked,” Glenn Cherry, Jonas’s father, said during the hearings. Jonas’s mother Judith recalled only being told that the sentence would be decided “on the merits,” rather than the family’s wishes, which she accepted. “I feel funny about this because we like Christy Jack,” Glenn Cherry said by phone this week. “She was a hell of a prosecutor.”

Jack declined to comment for this article. Suman Cherry, the widow, said she didn’t push for the death penalty, but rather accepted the prosecution’s suggestion that the case qualified for it, which is not the same thing as being “pro-death penalty.” She feels Storey received a fair trial. “I don’t actually think whether we believe in the death penalty should have any bearing on what happens,” she said. “Let’s say we all got up at trial and said what we thought...and the jurors would have to decide who is suffering more. That’s not how it should work.” 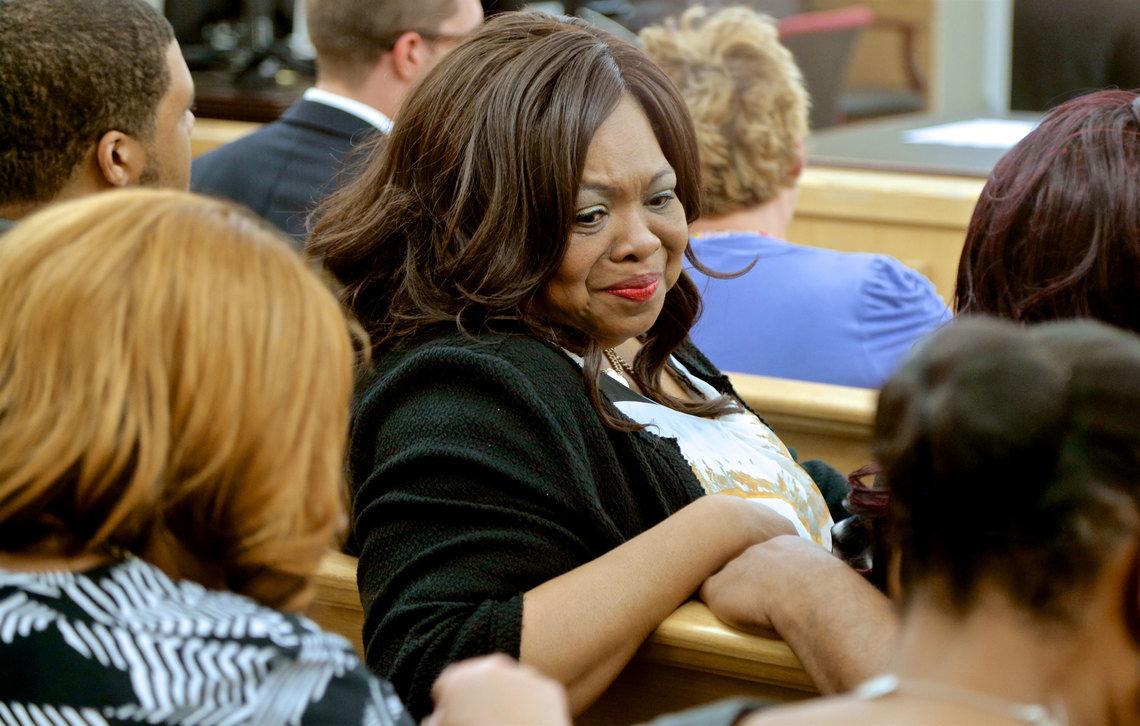 Marilyn Shankle-Grant attends a hearing in Fort Worth for her son, Paul Storey, who is on death row in Texas.

She remains close to the parents of her deceased former husband, and wonders if perhaps the conflict of memories between them and the prosecutor was really a moment of miscommunication. “I do remember Glenn saying he would be accepting of whatever decision was made, and there are ways to misinterpret that,” she said.

Some victim families have said that they were marginalized and ignored by prosecutors after expressing opposition to the death penalty. At the same time, victim families can be divided amongst themselves — or individually ambivalent — putting prosecutors in a complex position should they want to consider their wishes.

The prosecutors in this case said they told the defense about the parents’ views. The defense said they didn’t (and there is no mention of the issue in either’s notes.) But what would have happened if they’d known? Much of the hearing last year involved both sides imagining how the trial might have played out differently. One of Storey’s trial lawyers, Larry Moore, said he would have used it to pressure prosecutors to abandon the death penalty, and had they persisted, “We would have tried to get [the Cherrys’ opposition] in front of the jury in every way imaginable.” One of the jurors, Sven Berger, weighed in to say that had he known of their opposition he would have “held out” for a life sentence “for as long as it took.”

Judge Everett Young now has the unenviable task of sorting through all these unreliable memories and alternate realities, and prosecutors are also arguing Storey should lose for the simple reason that his previous lawyers could have learned about all this earlier, and failed to present it in a past appeal. If Storey does lose, the Cherrys want Texas Gov. Greg Abbott to step in and save the man who killed their son. “Paul Storey’s execution will not bring our son back, will not atone for the loss of our son, and will not bring comfort or closure,” they wrote to the governor and the state’s Board of Pardons and Paroles last year. They have reason to hope; the wishes of a victim’s family were instrumental in convincing the same governor and board to spare the life of another death row prisoner, Thomas Whitaker, earlier this year.

But like prosecutors and jurors, the governor can listen to the victims if he wants to, or he can ignore them.

Cherry’s parents decided to write to the governor out of concern for Marilyn Shankle-Grant, the mother of defendant Paul Storey. “We didn’t want to see her go through the same thing,” Glenn Cherry said. At the courthouse last September, the parents all met. “I was finally able to tell the Cherrys thank you for fighting to save my son's life," Shankle-Grant told a reporter. "I don't even think there's words to say how grateful that I am.”

A previous version of this story incorrectly named the judge deciding Storey's appeal.