How the administration is turning child protection into law enforcement 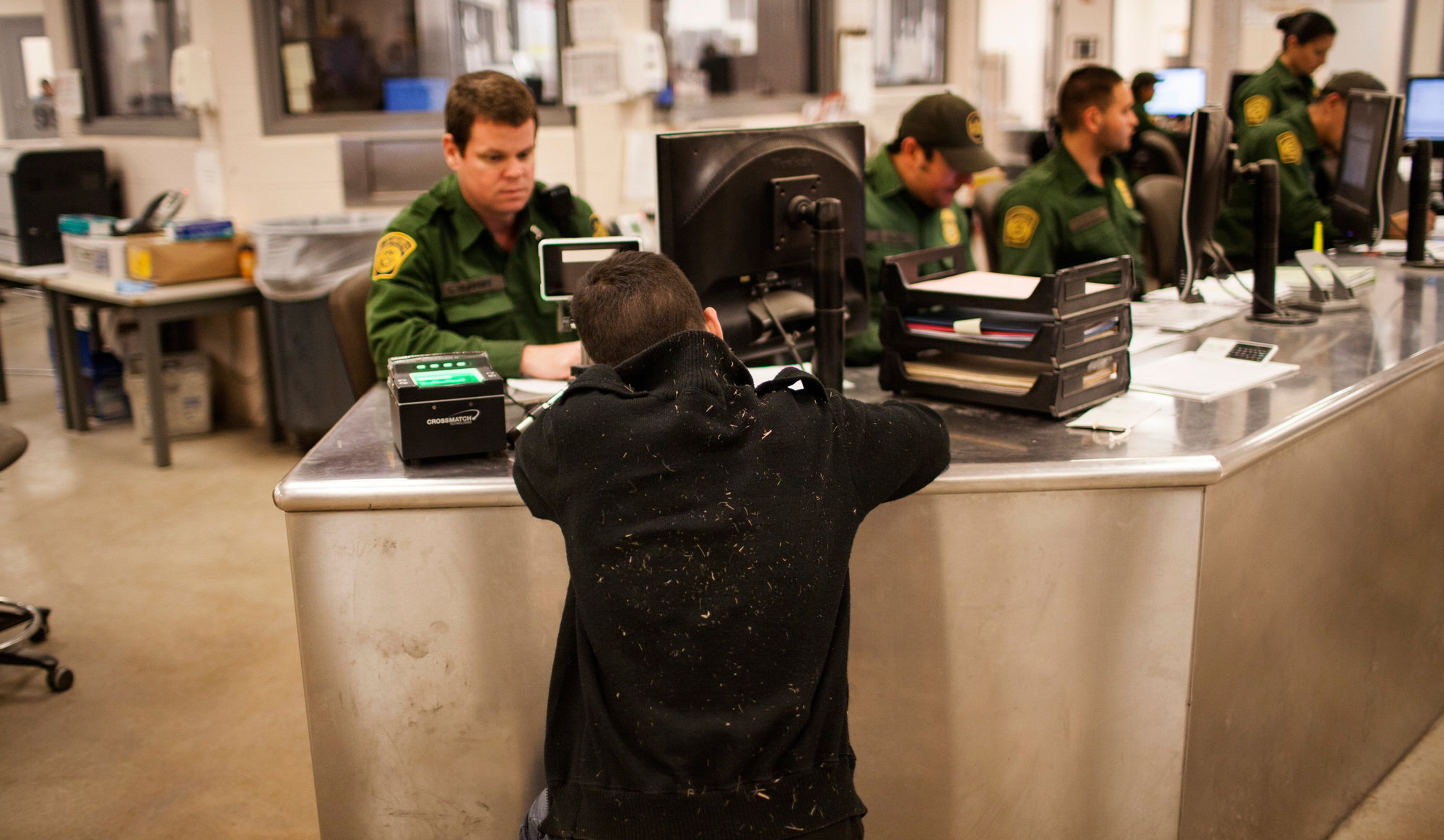 An unaccompanied boy from Guatemala is processed at the Customs and Border Protection Rio Grande Valley sector headquarters in Texas, in 2013. Kirsten Luce for The New York Times
By Eli Hager
Additional reporting by Caitlin Dickerson

On April 4, the White House posted a fact sheet on its website warning that legal “loopholes” were allowing tens of thousands of immigrant children who entered the country on their own to remain in the United States.

And the same week, the Administration for Children and Families, a division of the Department of Health and Human Services not normally known for its politics, announced that it “joins the President in calling for Congress to close dangerous loopholes.”

Over the past month, the Trump administration has taken aim at a previously uncontroversial set of child protection laws created to protect young people who cross into the United States without a parent or guardian, perhaps aided by smugglers. The administration now sees some of these same youths as a threat, and is portraying the laws as “loopholes” that are preventing the quick deportation of teenagers involved in gangs.

The campaign is aimed at Capitol Hill, but the Trump administration is not waiting for legislation: In a series of at least a dozen moves across multiple federal agencies, it has begun to curtail legal protections for unaccompanied children who cross the border. Many of these safeguards were created by a 2008 law that provided protections for children who might otherwise be forced into labor or prostitution.

The young people affected by the administration’s measures have been fleeing deadly gang violence in Central America since 2014, when civil strife erupted in the region. They are a less politically shielded group of young people than the so-called “Dreamers,” most of whom came to this country as toddlers with their parents.

The new directives appear aimed at detaining more of these youths after their arrival and speeding deportation back to their home countries—where they may face violent reprisals from gangs or other forms of abuse.

“It has been national law and policy that as adults we look out for children,” said Eve Stotland, director of legal services for The Door, a youth advocacy organization in New York. “No longer.”

Among the many new directives, the State Department in November gave just 24 hours’ notice to endangered children in Guatemala, Honduras and El Salvador before cancelling a program through which they could apply for asylum in the United States prior to getting to the border. About 2,700 of them who had already been approved and were awaiting travel arrangements were forced to stay behind in the troubled region.

The Department of Homeland Security, meanwhile, has sharply cut back on granting a special legal status for immigrant juveniles who have been abused, neglected or abandoned; the program dropped from a 78 percent approval rate in 2016 to 54 percent last year, according to statistics compiled by U.S. Citizenship and Immigration Services. In New York, Texas and elsewhere, the agency in recent months has also begun revoking this protection for children who had already won it, according to legal aid organizations in the states.

The Justice Department has also issued legal clarification for courts and prosecutors about revoking “unaccompanied child” status, which allows minors to have their cases heard in a non-adversarial setting rather than in immigration court with a prosecutor contesting them. (The White House has said that it intends to remove this protection altogether, but has not yet done so.)

And the Office of Refugee Resettlement, which provides social services to vulnerable immigrant youth, is now placing all children with any gang-related history in secure detention instead of foster care, whether or not they have ever been arrested or charged with a crime, according to an August memo to the President’s Domestic Policy Council.

“It’s law enforcement mission creep, and our office is ill-prepared for it,” said Robert Carey, who was director of the refugee agency under President Barack Obama.

The Trump administration has said that its actions are necessary to stem the tide of violent crime. It has focused on teenagers belonging to or associated with the Salvadoran-American street gang MS-13, which has been linked by the police since 2016 to at least 25 homicides on Long Island — a testing ground for many of the president’s new policies.

About 99 of the more than 475 people arrested in the New York City area during ICE raids for gang members had come to the U.S. as unaccompanied children, a representative for the agency said.

To fortify the “loophole” narrative, official announcements of these ICE actions often point out that a number of those arrested were in the process of applying for various forms of child protection.

Yet 30 of 35 teenagers who were rounded up during these ICE raids last year and who later filed a class-action lawsuit have subsequently been released because the gang allegations against them were thin, according to the ACLU. And the Sacramento Bee reported that a juvenile detention center in California recently cut back its contract with the federal government and complained that too many immigrant teens were being sent there with no evidence of gang affiliation.

The refugee agency acknowledged in its August memo to the White House that only 1.6 percent of all children in its care have any gang history.

“The arguments they’re making are just really challenging to basic logic,” said Elissa Steglich, a law professor at the University of Texas who teaches a clinic for immigrant families.

The current system of protection for vulnerable children fleeing violence, abuse, persecution, or trafficking in other countries is the product of two decades of incremental change.

Previously, children as young as 4 were shackled and held in secure detention and even solitary confinement, along with adult refugees; by the 1990s, they were handled by the Immigration and Naturalization Service, which acted as both their prison guard and parent.

The Homeland Security Act of 2002, which created ICE, separated those roles by transferring responsibility for minors to a child-friendly office in Health and Human Services, the Office of Refugee Resettlement.

Then, in 2008, the Trafficking Victims Protection Reauthorization Act created the current division of “unaccompanied child” status and its accompanying legal privileges.

For the first nine years that the refugee resettlement office accepted these children, it served an average of 7,000 to 8,000 of them a year, according to its website. Since 2014, however, as the three northern-triangle Central American countries have descended into a pandemic of violence, more than 150,000 of these minors have arrived at the border.

That has caused the agency’s incoming population to skyrocket to around 40,000, about a third of whom are 14 or younger. A third are girls.

The Trump administration at one point floated the idea of repelling this influx by separating children from their parents as a disincentive. Though no such policy was officially adopted, more than 700 of these family separations have occured since October, according to data reviewed by the New York Times.

Most recently, the administration appears to be targeting another child protection measure, called “special immigrant juvenile status,” which allows children to apply for a green card if a juvenile court finds they cannot be reunified with a parent because they have been abused, neglected or abandoned. In its list of immigration principles and priorities, the White House says this special immigrant protection is “abused” and “provides another avenue for illicit entry.”

Earlier this year, the federal office in charge of these cases, U.S. Citizenship and Immigration Services, began issuing many more denials and revocations in states where family court jurisdiction extends to age 21. In a statement, a spokesperson said the agency’s reasoning was that juvenile courts should not have power to make custody decisions about those older than 18.

A similar trend seems to be underway for children claiming asylum, a protection for people who have been persecuted or fear persecution based on race, religion, nationality, or membership in a certain social or political group. The approval rate for kids fell from 56.2 percent in 2017 to 41.7 percent in the first quarter of this fiscal year.

By far the most dramatic changes in the government’s treatment of unaccompanied and vulnerable children under the Trump administration have taken place at the Office of Refugee Resettlement, where juveniles wait to hear from their parents or for their immigration cases to be resolved.

In its August memo to the White House, the refugee agency said it would “actively respond” to a speech the president had delivered the previous month about gang violence on Long Island. Since then, the time that children spend in the agency’s facilities has jumped significantly, according to multiple federal lawsuits.

One of the recent posts on the White House website explained that releasing unaccompanied children too soon from secure detention and into the custody of guardians or relatives who have not been thoroughly vetted might lead to gang recruitment, even if the minors had no involvement with MS-13 before.

Most troubling to immigrant advocates is the way an agency tasked with providing child services has entered into a collaboration with ICE, whose mission is border enforcement.

Under a recently signed memorandum of understanding between the two agencies, the refugee agency will begin to provide ICE with information, including names, fingerprints, addresses, and phone numbers, on children’s parents or sponsors, as well as of other adults living within the same household, according to a copy of the agreement obtained by The New York Times.

The information can now be used to deport those adults if they attempt to regain custody of their children. The refugee agency will also allow ICE to access its online system directly and enter information such as alleged gang involvement, according to testimony in federal court by James De La Cruz, a refugee agency official who supervises field officers and intakes.

Since it is not a law enforcement agency, the refugee office’s caseworkers are not trained to judge the credibility of a gang allegation entered by ICE, which can be based on a child wearing black sneakers or a Brooklyn Nets hat, or “frequenting an area notorious for gangs.”

Fewer than half of the unaccompanied immigrant children in this country have court-approved claims to asylum, special immigrant juvenile status, or some other form of child protection, according to an immigration records clearing house maintained by Syracuse University.

Yet coming to the United States to seek asylum or protection is not in itself an illegal act. “You come and you ask,” said Olga Byrne, a senior researcher and advocate at Human Rights First. “There’s no advance permission.”