Punishing Kids With Years of Debt

Courts often order children who break the law to pay thousands of dollars in restitution to victims—even when the victim is an insurance company. 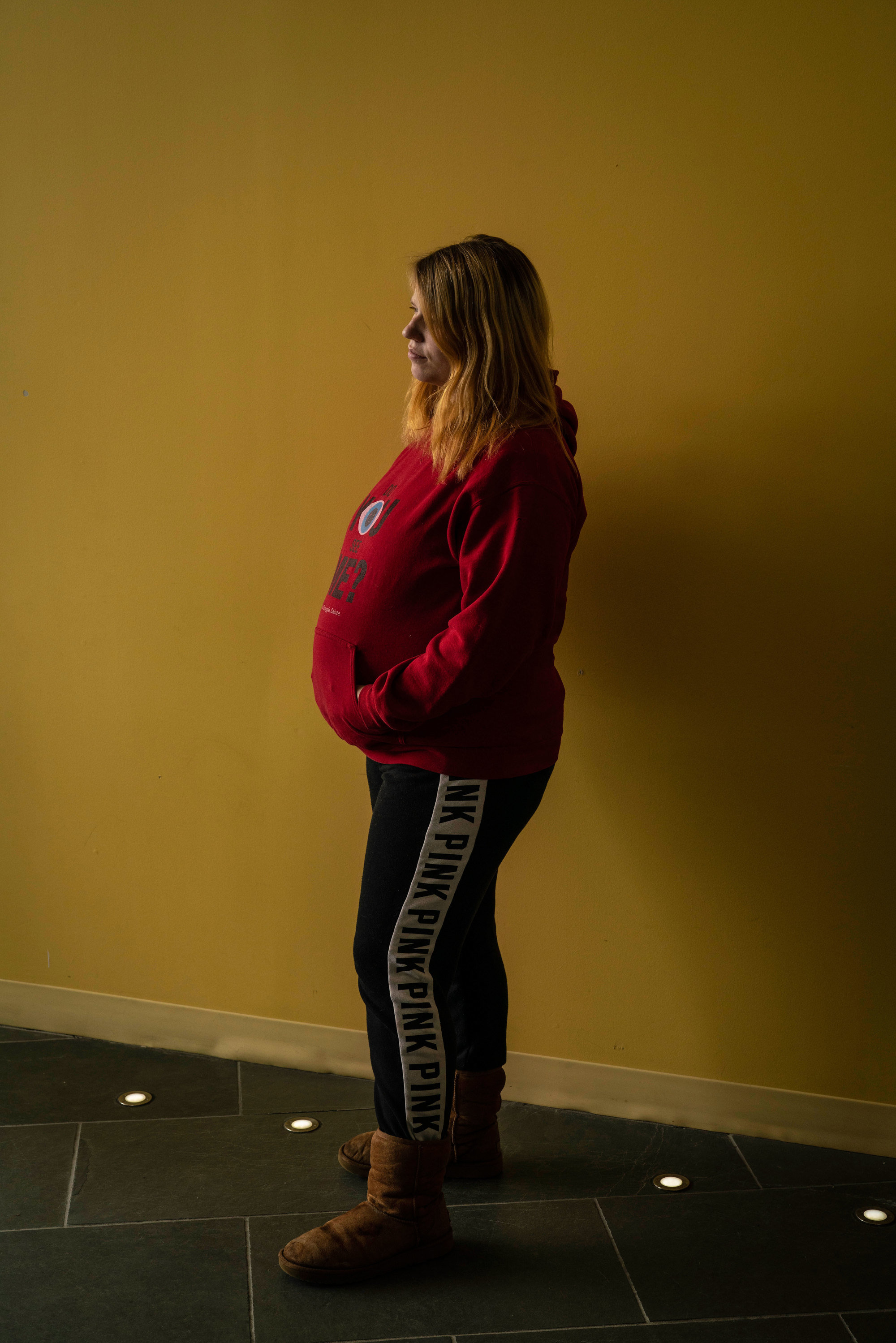 SOUTH PORTLAND, Maine — When Sophie McMullan was 17, her older boyfriend burglarized a string of upscale houses on the Maine coast, giving her a fancy purse, designer sunglasses and other loot. She joined him only once: The couple broke into a lakeside home and stayed overnight, consuming snacks, Pepsi and alcohol, according to police records.

This story was published in collaboration with The Washington Post.

McMullan went along with the crimes, she said, because after a grim childhood marked by violence and periods of homelessness, she’d never felt wanted before. And she paid a steep price, serving nearly three years in juvenile prison, where she was the victim of severe assault, according to prosecutors. But under state law, her debt to society still was not settled.

Months after getting out, she was rearrested for failing to appear in court to pay restitution to the families who lost laptops, credit cards and other valuables. McMullan’s boyfriend admitted to police that she hadn’t joined him in those burglaries. But under accomplice liability law, she was ordered to pay the full value of the stolen items—$2,831.69—the same amount as him.

“I’m not trying to justify anything,” McMullan said. “But there is more than one way to pay for a crime, and I have overpaid for mine.”

Across the nation, children and teens who commit crimes are routinely ordered to pay their victims restitution for damaged property, lost wages and medical bills, leaving many saddled with a financial burden that can follow them long into adulthood. Just a half-dozen states cap these payments, which often reach into the tens of thousands of dollars, according to a Marshall Project review of five years of cases in 10 states that collect data on juvenile restitution.

As a result, young people like McMullan can find themselves homeless and in debt, paying off victims many years after they’ve served their sentences. 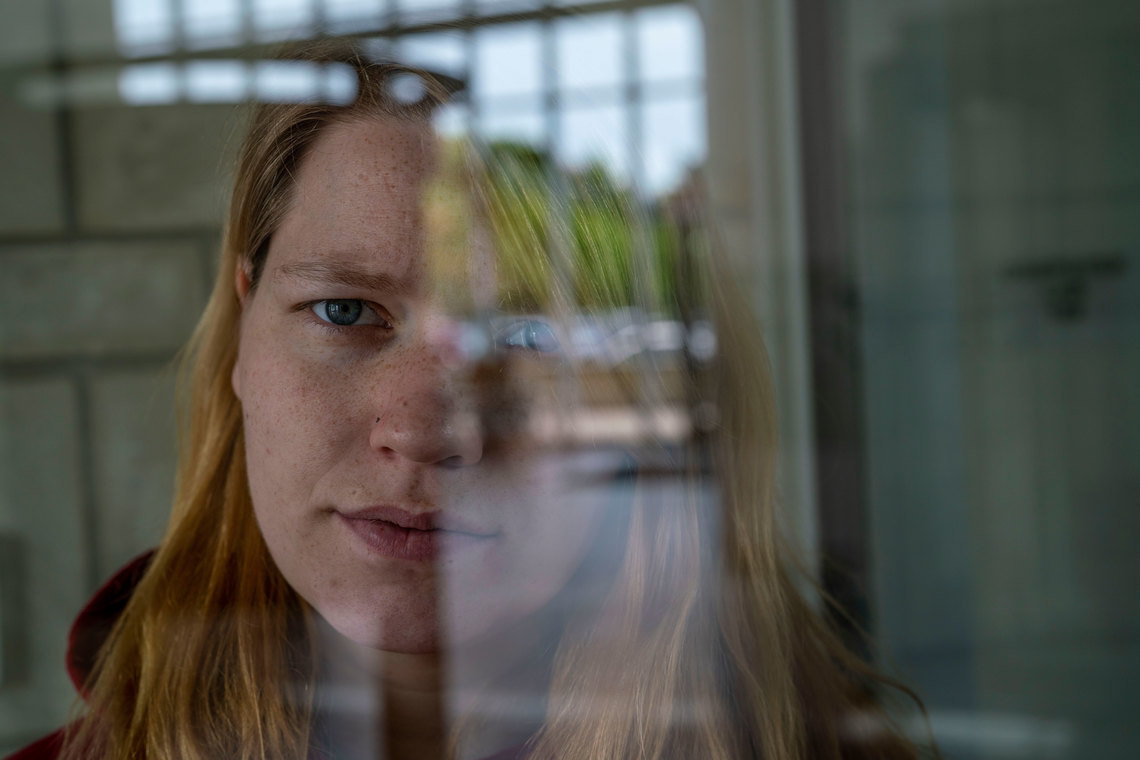 Months after getting out of jail, McMullan was re-arrested for failing to appear in court to pay $2,831.69 to the victims of her former boyfriend's other burglaries.

Facing pressure from youth advocates, some states have reduced or eliminated other juvenile fines and fees, including payments parents owe to government agencies for the costs of their kids’ incarceration. But few states moved to curb juvenile restitution until recently.

“The money is going to a victim as opposed to society generally or to the court,” said Nate Balis, juvenile-justice director for The Annie E. Casey Foundation. “It’s more sensitive territory.”

Maine could become just the second state to approve legislation that would ease the burden on people like McMullan. The bill—set for a final vote this week—allows courts to reduce or eliminate young people’s payments based on their changing financial circumstances, or to pay off part of the debt with service work.

There’s no national tracking of restitution in youth courts. But judges typically order these payments in cases involving theft or property damage, which made up approximately 30 percent of juvenile arrests in 2017, or about 243,000 cases.

Those who support juvenile restitution say it not only addresses the victims’ needs, but also helps young people take full responsibility for their crimes.

“There’s a rehabilitative effect to the feeling of having paid for what you did, the feeling of ‘I made it right,’” said Christine Thibeault, the assistant district attorney for juvenile cases in Cumberland County, Maine, who handled McMullan’s case. 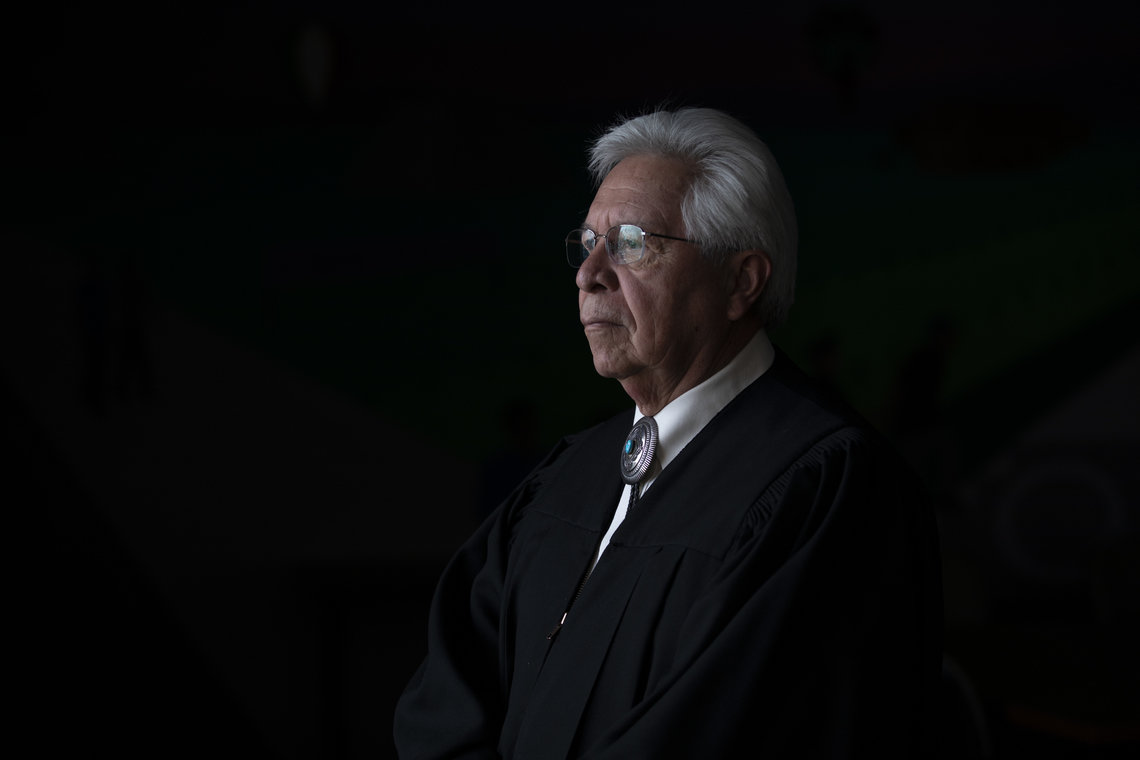 Judge John J. Romero Jr., president of the National Council of Juvenile and Family Court Judges, believes that kids should not have to work full-time to pay off a debt to an adult.

Adria Malcolm for The Marshall Project

Critics counter that restitution is just one of countless court debts, providing little rehabilitation and unfairly punishing young people from poor families, who make up the overwhelming majority of cases in juvenile courts, said Judge John J. Romero Jr., president of the National Council of Juvenile and Family Court Judges.

Young people should be in school, not working full-time to pay off a debt to an adult, Romero said. If their family does have money, he added, “the parents end up paying, and what does a child learn from that?”

Opponents also point out that, in at least 30 states, children can be ordered to pay restitution to insurance companies.

In Maine, for example, a 15-year-old boy who had been bullied at school recently was ordered to pay $12,347.33—not to the classmate he hurt in a fistfight, but to MaineCare, the insurance provider that covered the resulting medical bills, according to testimony submitted in April to the state legislature.

In Phoenix, where a 15-year-old boy damaged his parents’ car while driving without their permission, the family’s insurance company declined to pay a claim unless the parents pressed charges against their son, according to juvenile attorney Christina Phillis. Once they did, the company was able to pursue restitution from the teen.

Phillis and other youth advocates argue that juvenile courts should not be helping to compensate insurers in these situations, given their purpose is to absorb financial losses.

“These are children in poverty making payments to multimillion-dollar corporations, under the threat of jail,” said Jessica Feierman, senior managing director of Juvenile Law Center, a legal advocacy group in Philadelphia. “If that’s intended to develop a sense of accountability, it’s not succeeding, because it’s asking kids to do the impossible.”

In 2016, Washington state passed legislation allowing juvenile courts to waive requests for restitution made by insurance companies, among other changes.

Bob Passmore, an assistant vice president for the American Property Casualty Insurance Association, said in an emailed statement that restitution paid to insurers for losses sustained in crimes benefits consumers in the long run, because it prevents higher premiums, but he did not address juvenile payments specifically.

Until the 1970s, the juvenile-justice system was meant to rehabilitate children, not to punish them. But in the decade that followed, as youth crime soared, lawmakers nationwide refashioned it in the mold of adult justice, including through new restitution statutes with an emphasis on righting wrongs.

Today, of all the fines and fees in the youth court system, victim restitution is typically the largest.

Under state laws, juvenile cases remain open until they pay everything they owe, even if they’ve already served their time, which subjects them to additional probation fees, GPS monitoring, random drug tests, warrantless searches and stints in jail. The debt can prevent their criminal records from being sealed and ruin their credit scores.

While the way juvenile restitution is calculated varies widely from state to state, poor families are typically hit the hardest. Most courts are required to consider adjusting the amount owed based on the child’s income—including those too young to legally work for pay—and sometimes the child’s parents. Some judges take a child’s allowance into consideration, and in some cases, their potential future salary, according to interviews with judges, prosecutors and defense attorneys around the country.

In many instances, better plea deals are offered to juveniles who can pay restitution, which is one reason wealthy kids end up with less jail time than poor ones for the same offenses, youth advocates say.

In a 2017 Massachusetts case, for example, the state offered a teenage boy a deal to reduce to misdemeanors his charges related to breaking-and-entering and larceny of a business—but only if he agreed to pay $5,000 in restitution, according to court records. He agreed and is now homeless as he tries to pay his debt.

“So many resources are being spent litigating whether his payments are regular enough that we could just pay to the victim,” said Mara Shulman, his lawyer. The boy asked not to be named. Prosecutors acknowledge that many of these payments are made in small increments, which means that victims must wait years to be fully compensated for their losses.

Courts’ success in collecting juvenile restitution varies by state: Connecticut, for example, recovered about 87 percent of the amount owed by young people over the past five years; in Mississippi, the rate was 28 percent. For amounts of more than $10,000, the payment rate is nearly zero in many states.

In Maine, which elected a Democratic legislature and governor in 2018, youth advocates sensed an opportunity to change the state’s juvenile restitution law. But parts of the bill have faced opposition from the Cumberland County District Attorney’s office, which successfully pushed to remove an $800 cap on what kids can be ordered to pay.

The prosecutor’s office also opposes a provision that would let kids perform community service as an alternative to restitution. Thibeault, the assistant D.A. in charge of juvenile cases, said it “does nothing to benefit victims.”

Even victims differ on the merits of restitution, though most say they want some form of redress. “That amount of money isn’t going to make or break us,” said Jay Cox, whose house McMullan’s then-boyfriend broke into while his family was home.

Still, Cox, who says he wants to see McMullan do well, pushed to make sure she was paying her restitution.

“Young people like her should be made to face up to their mistakes before they move on to a bigger or more life-altering one,” he said.

Another victim in the burglary case said he would have been satisfied with a less costly form of atonement.

“Frankly, if she’d just written us a letter saying, ‘Look, I fucked up, this is not who I am,’ that would have been enough,” said the homeowner, who asked not to be named for fear of retribution. “On the other hand, they did do this.... They’re why I now do a circuit around the house every night checking the locks. I mean, it changed our lives.” 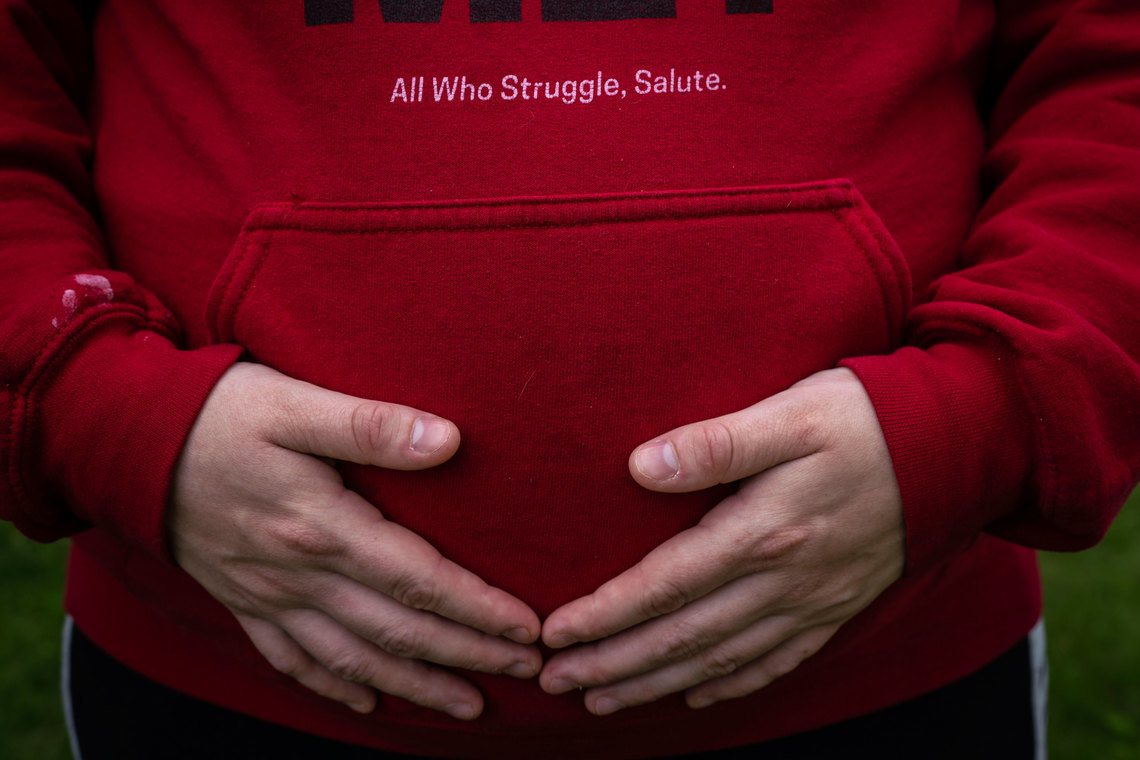 McMullan is now expecting a child. Thanks in part to a charitable donation, she was able to pay off the last of her restitution bill.

McMullan’s former boyfriend, Artem Tymchenko, is now in prison for a separate probation violation. In a letter to The Marshall Project, he expressed surprise that she owed restitution, noting that he “had taken the bulk of the responsibility for the crimes I committed.”

After getting out of detention, McMullan was homeless and struggling with PTSD, but made small restitution payments every month from her paychecks working at Dollar Tree and Dunkin’ Donuts.

Last month, thanks in part to a donation from the recently formed Antonia J. Daley Foundation, which helps low-income juveniles in Portland resolve court debts, McMullan paid off the last of her restitution bill. Now 23, she has an internship through the University of Southern Maine, helping to locate resources, including food pantries and shelters, for struggling youth around the state.

This summer, she’s expecting her first child. Unburdened of debt, she now has some money for a stroller with tough wheels and a baby snowsuit for the Maine winter.

Maine Gov. Janet Mills signed a bill that will overhaul how juveniles who commit crimes compensate their victims. The new law will prohibit juvenile courts from requiring children to make restitution payments to insurance companies and from jailing anyone under 14 for failure to pay. It will also let youth who are struggling to settle their debts modify what they owe or perform community service as an alternative.

In a statement, a spokesman for Mills, a Democrat and former prosecutor, said that she believes victim restitution can be a useful and appropriate means of holding youth accountable for their actions, particularly those who are affluent or old enough to work. But the law, the statement said, should ensure that financial penalties do not trap young people in the justice system, preventing them from living better lives.