What Do Abolitionists Really Want?

For years they’ve pushed a radical vision of a world without prisons. Now, the mainstream is taking note. 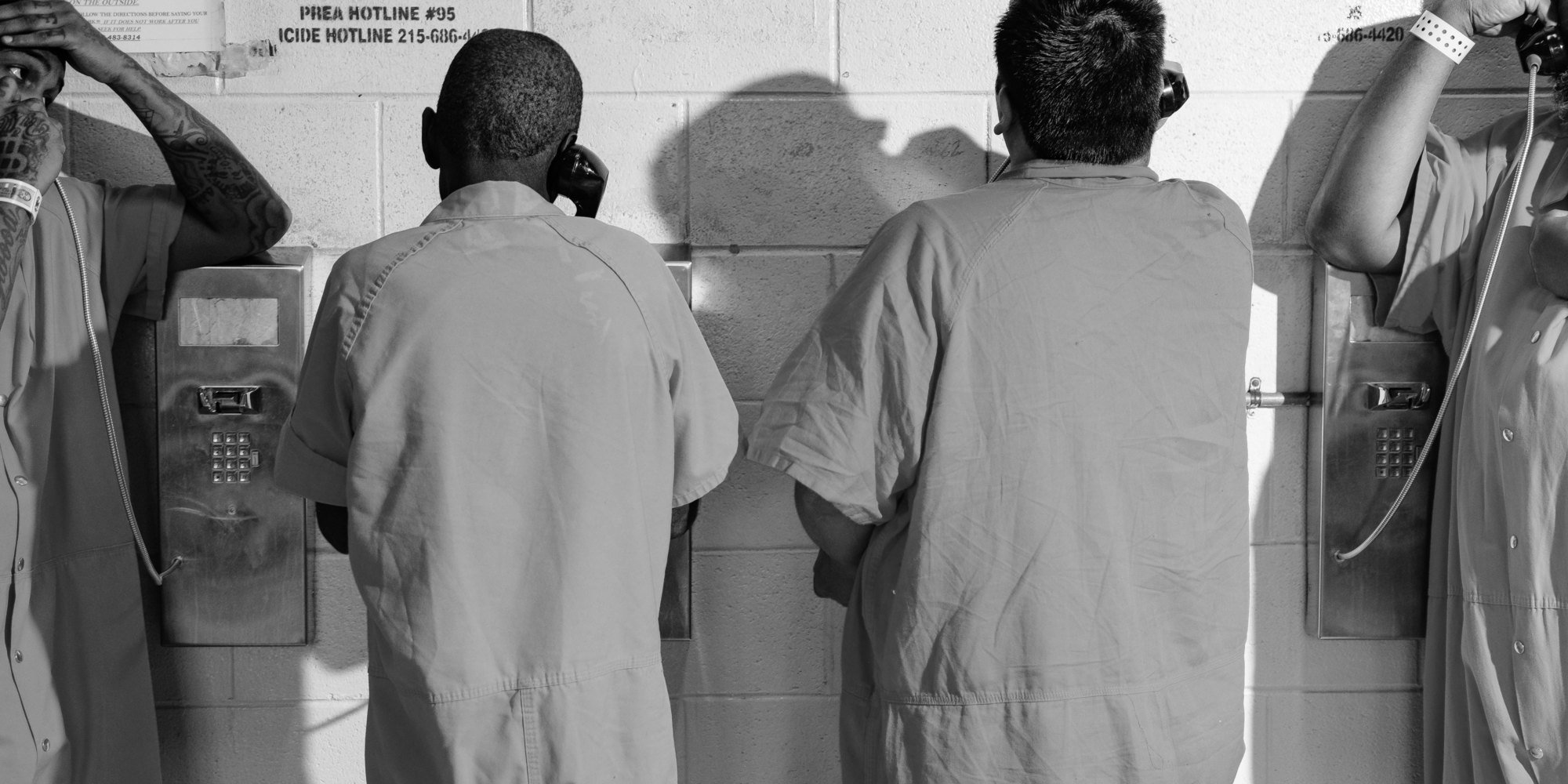 Prisoners at the Curran-Fromhold Correctional Facility in Philadelphia. The idea of prison abolition has gained traction among criminal justice reformers. Christopher Lee/VII, via Redux
By Bill Keller

Five years ago, when the activist and cable TV host Van Jones launched the #cut50 campaign to reduce U.S. prison populations by half, many mainstream justice reform watchers rolled their eyes at what seemed to be a reckless overreach. (My own eye-roll is here.) Now the campaign has attracted an A-list of celebrities, philanthropists and candidates pursuing the Democratic presidential nomination. These days, when Jones gets pilloried, it’s as likely to be for being too compromising: Why stop short of #cut100?

This story was published in collaboration with Bloomberg Opinion.

People who follow criminal justice policy for a living say the fastest growing subset of the reform movement consists of abolitionists who say a system that is inherently racist and based on retribution should be pulled up by the roots. Not just prisons and jails, but most of the institutions of law enforcement and criminal justice.

“Abolition has become a rallying cry for the progressive wing of the justice reform movement,” Jeremy Travis told me. “NO NEW JAILS. NO MORE MONEY FOR POLICE. ABOLISH ICE. ABOLISH PRISONS.” Travis, who oversees criminal justice issues for the Arnold Ventures philanthropy, has spent a career in the system, most recently as president of the John Jay College of Criminal Justice in New York. (Disclosure: Laura and John Arnold, the founders of Arnold Ventures, are donors to The Marshall Project, my former employer.) “There is lots of energy behind this reframing of the ‘reform’ agenda,” Travis said.

Prison abolition has decades of antecedents, led by once-fringe figures like Angela Davis, the 1960s communist firebrand, and Ruth Wilson Gilmore, the subject in April of a sympathetic profile in the New York Times Magazine. More recently abolition has been embraced by younger Americans who grew up after violent crime peaked in the early 1990s, and has helped kindle some fundamental rethinking in the mainstream.

Like other radical ideas—Medicare for All, the Green New Deal—abolition means different things to different people. Most of those who rally to the cause do not advocate a world where no one answers your 911 call and serial killers are set loose. Abolition is an ideal—like, say, “repeal and replace.” The real debate is what should replace the current institutions.

“There is always going to be some role for prisons, but maybe 10 percent of what we do now,” said Martin Horn, a former New York State parole director, now a professor at John Jay. “I think we need police. We may not need as many as we now have, and we want to use them differently.”

Abolitionists generally start the conversation with two immense objectives. The first is devolving responsibility for public safety to local communities. (“Civilianizing safety,” some experts call it.) One reason New York City has reduced its crime rate while simultaneously slashing arrests, incarceration and law-enforcement overreach is that the city has a nonprofit network on the ground, some of it subsidized by the city, to combat violence and to help the formerly incarcerated safely reenter society. Abolitionists’ other aim is to redistribute government spending from police and prisons to narrowing the underlying, crime-breeding inequalities of wealth and opportunity. They would instead invest in housing, education, jobs and health—a goal that seems remote in the current political environment.

What is new, says Elizabeth Glazer, director of New York City’s criminal justice office, is that many of the ideas that animate the abolitionists “are now finding their way into established criminal justice structures”—not just scholars and activists but also prosecutors questioning what crimes should be prosecuted and judges seeking out-of-court remedies.

Glazer attributes the shift to an awareness, coming in part from the testimony of formerly incarcerated men and women, that “the criminal justice system can do harm” as well as enhance safety. It can break families, derail careers and demolish community cohesion. New York’s experience seems to demonstrate the rewards of a lighter touch: People who do not accumulate arrest records and jail time are more likely to stay employed, in families and out of trouble.

To reformists who work in or with the system, the abolitionists can be exasperating—a case of the ideal being the enemy of the good. DeAnna Hoskins, president of JustLeadershipUSA, which mobilizes former prisoners to press for reform, points to the campaign that persuaded New York to close the jail complex on Rikers Island. The plan depends on building smaller, more humane jails in four boroughs to house a much-reduced population of prisoners. Along with the inevitable resistance of prospective new neighbors, the city now faces vocal opposition from abolitionists who object to any new jails on principle.

“That’s just not realistic,” Hoskins said. “We’re not going to close Rikers on Monday and not have any type of detainment.” She added, “When we talk about abolishing prisons and abolishing law enforcement, it’s actually reducing the power and the reach of those entities.”

One of the liveliest abolition debates concerns parole and probation, which get less attention than incarceration but regulate the lives of 4.5 million Americans, twice as many as are confined in prisons and jails. Because a parolee can be returned to prison for a technical infraction such as a missed appointment or a trace of drugs in a urine sample, the parole-to-prison pipeline is a major feeder of mass incarceration. Vincent Schiraldi, the co-director of the Columbia University Justice Lab, ran the New York City probation department when Michael Bloomberg, the founder and majority owner of Bloomberg LP, was mayor. Schiraldi estimates that the borough of Manhattan alone spends roughly $16 million a year for supervision of ex-offenders.

Experts have proposed a range of replacements for the supervisory bureaucracy. One option, already practiced in New York City for parolees regarded as less risky, is to replace parole officers with ATM-like kiosks that scan fingerprints. Check in once a month, answer a few questions on a computer screen and get on with your life. Schiraldi’s version of abolition favors a more human approach: outsourcing supervision to organizations that would be paid to help the formerly incarcerated navigate the outside world.

Years ago, when he was running Pennsylvania’s corrections department, Horn offered an even more radical suggestion: give parolees vouchers they can use to buy education, housing, drug treatment or other services and let them decide what help they need to reenter society. These are services the current bureaucracy performs poorly, if at all. Horn concedes that to prepare prisoners for such an independent life would require transforming prisons into prep schools, devoted to graduating people with marketable skills and control of their demons, especially addiction.

Although polling is scarce, it’s a fair bet that “abolition” is not a voter magnet. The electorate may want the system to be less cruel and more rehabilitative, but voters also want a professional answering that 911 call when their kid gets shot—and not a member of neighborhood watch. The bipartisan coalition that has found common ground on criminal justice would be severely strained by such a lurch to the left. The conservative attack ads write themselves.

But in recent years, with crime near historic lows, the iniquities and unintended consequences of American punishment have so captured public concern that even President Donald Trump coughs up an occasional platitude about “giving our fellow citizens a chance at redemption.” There is a place for higher aspirations, if only to keep moving the middle. Closing Rikers was a radical idea, until it wasn’t. The #cut50 campaign was mocked as unrealistic until people realized that it was essentially restoring incarceration to 1980s levels.

“I don’t think that in my lifetime we’ll ever abolish prisons, but it’s a really important question, why we put people in prisons,” said Travis, adding that the abolition debate is “a healthy tension that is really challenging the pace of reform and the status quo.”

To paraphrase Robert Browning, a movement’s reach should exceed its grasp, or what’s a heaven for?