What Gate Money Can (And Cannot) Buy

Most states give money to people leaving prison. But some formerly incarcerated people say it's often not enough to meet their basic needs. 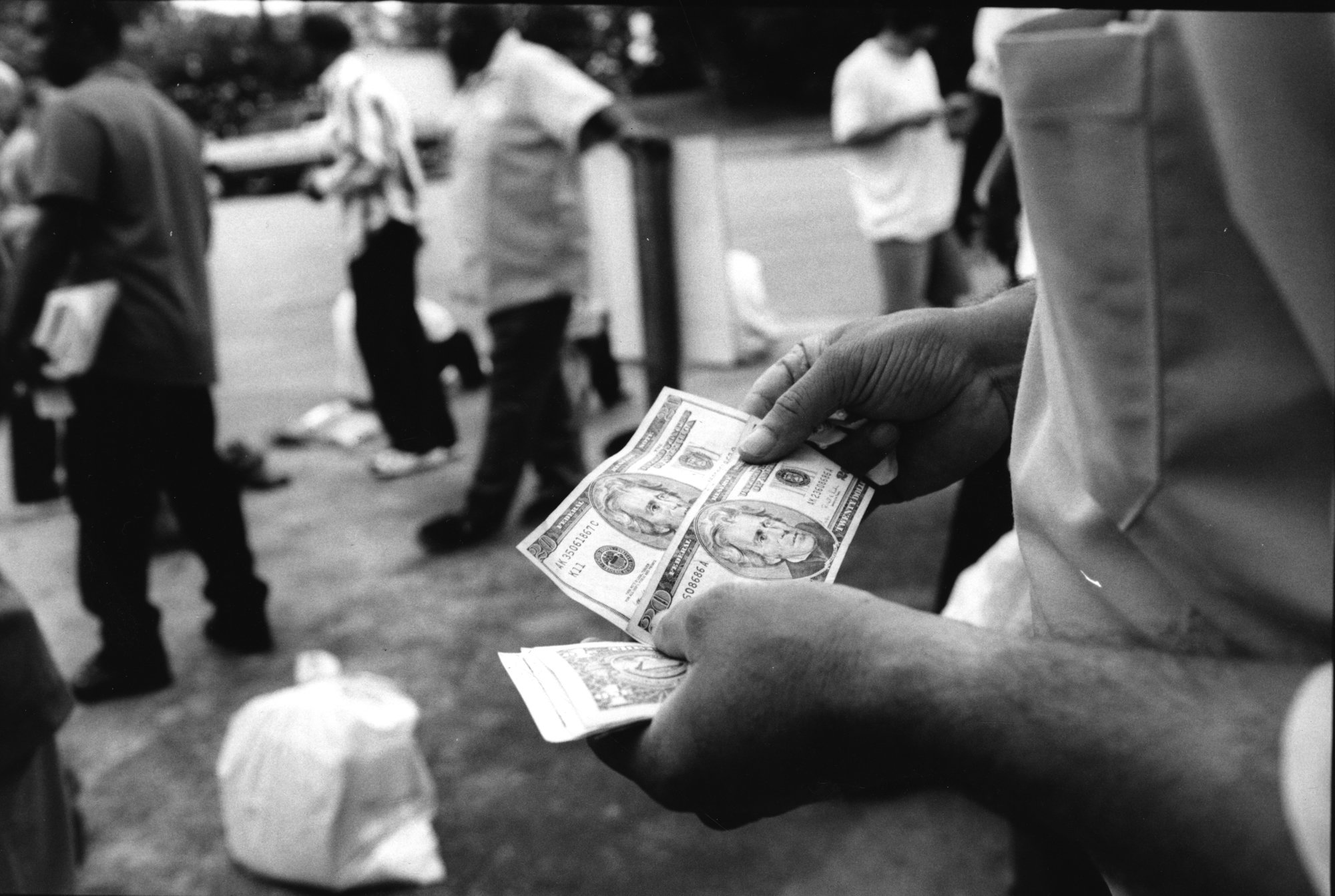 As Ignacio Pedroza travelled the more than 350 miles from Pelican Bay State Prison to his home near Oakland, he was paying close attention to the roadside signs—particularly the ones that advertised prices for gas or food. Things were more expensive than they had been when he went to prison 12 years earlier.

In his pocket, Pedroza had $200 in a debit card the state of California had given him upon release. He was busy making calculations in his head, trying to figure out what that money was actually good for.

Pedroza was lucky: Because his parents picked him up from prison he didn’t have to spend his money on a bus ticket home. Still, Pedroza, who had spent years watching people come back to prison after being unable to make ends meet on the outside, found the amount of money California gave him on his way out of prison “laughable.”

Roughly 600,000 people are released from federal and state prison each year, according to the Bureau of Justice Statistics. Experts often say the first 72 hours after release are critical to determining whether a former inmate’s path will lead away from prison or make a sharp U-turn. But what resources prisons provide to help people navigate those first moments on the outside varies widely from state to state.

The Marshall Project reached out to departments of corrections in all 50 states to find out what they give people when they get out of prison. Forty-two states responded. Roughly 90 percent have some formal policy to provide funding, commonly called “gate money,” to cover transportation, housing or food costs for prisoners after their release.

At the highest end, and provide $200 and $100, respectively. At the lowest end, people in and often leave prison with as little as $10 or $20 in their pockets, and people in states such as may leave with no money.

Someone released after from state prison in may receive upon release.

Many formerly incarcerated people say the money isn’t enough to meet the demands of their lives in the days following their release. Many say they are forced to make trade-offs between eating or buying practical items that can help them transition back into society, such as cellphones and professional clothing for job interviews. Moreover, release money in nearly every state hasn’t kept pace with rising inflation, The Marshall Project found. The last time Oklahoma increased gate money was in 1974, when $50 had the same buying power of about $275 today. In California, the gate money amount hasn’t increased since 1973, when $200 was worth the equivalent of about $1,200 today.

Providing money or bus tickets to people leaving prison is expensive for many of the corrections departments. In California, for example, the department spent $6.7 million on release money between July 2018 and June 2019. The state has one of the largest prison populations, with nearly 115,000 people behind bars. Between July 2017 and June 2018, roughly 38,000 of the state’s prisoners returned home.

To keep the cost down, some states like Virginia, Wisconsin, Maryland and several others draw gate money from inmates’ own wages or from deposits to their commissary accounts. The Virginia Department of Corrections withholds 10 percent of money transfers from family members to create a $1,000 reserve for each prisoner. The Wisconsin Department of Corrections diverts 10 percent of prisoners’ paychecks into a savings account for use upon release. The Maryland Department of Corrections withholds money from prisoners’ paychecks as soon as they start working until they have $50 in a reserve account. A spokesperson for the Maryland department says the accounts are capped at $50 because it is the average cost of a bus ticket to any point in the state.

The first time Eddie Kane, 35, got out of prison in 2004 he spent all of his release money getting back to Baltimore County, Maryland. One year later, Kane went back to prison for second-degree murder. When he was released in August 2018, he didn’t have to worry about transportation costs. He was married, and his wife came to pick him up. So he planned to spend his $50 in release money on their first meal together in 13 years. At a nearby Panera Bread, he ordered a cheesesteak and a soup, and his wife ate a lobster roll. After paying the bill, there wasn’t much money left.

Kane says it was important for him to be able to contribute—even if it meant just buying his wife a sandwich. For 13 years, he says, he was on the receiving end of his wife’s generosity.

Without the support of his family, Kane says he isn’t sure how he would have made it through those first few days following his release. Transportation, he says, is one of the biggest costs after prison. He often relied on public transportation to make it to job interviews and to meet with his parole officer.

When Taj Ashaheed was released from prison and dropped off in downtown Denver with $100 of gate money on a debit card, he used it to buy a cheap cell phone. Then he went to Subway and ordered a meatball sub.

Ashaheed was able to stay with a family member for the first month or so after prison. But for people who aren’t so lucky, housing is an expensive and immediate need, said Sean Taylor, the deputy executive director of the Second Chance Center, a reentry organization in Colorado.

Taylor, who himself was released from prison and received $100 in gate money about eight years ago, said the shelters his center can refer people to cost around $60 a week, and a bad motel might cost about $350.

For Ashaheed, $100 felt like a “token gesture” on the part of the state, not like a real attempt to help people get on their feet. “It felt like...we’re just going to say $100 because it sounds like a good number, but good luck with that,” he said.

States that have no official policy to provide gate money or transportation funds, like New Hampshire, often make resources available on a case-by-case basis. “If someone needs money to get on a bus, that would happen,” said Laura Montenegro, a spokesperson at the New Hampshire Department of Corrections.

In addition, the majority of people leave New Hampshire DOC custody through a transitional work center and halfway house, Montenegro said, allowing them to save money and get on their feet. Case managers also work to develop reentry strategies early in someone’s incarceration, with the ultimate goal of making sure they don’t come back. “We would love to close facilities,” she said.

To be sure, the majority of states send released prisoners home with cash, check or debit cards. Yet few states give a flat amount of gate money to every person released. Often, they determine gate money eligibility via formulas that look at how much money people in prison have in their accounts before release. That’s the case in Maine, where prisoners are given $50 cash if their account balance is less than $500—and they haven’t spent more than $500 in their last six months in prison.

Similarly, some states supplement money in prisoners’ accounts to a certain baseline. In Montana, inmates can apply for the amount of gate money necessary to ensure they leave the prison with $100—so if they have $50 in their account, the state may give them another $50.

When states give gate money from their own budgets, it makes little sense to do so via fee-laden cards, said Wanda Bertram, a spokeswoman for the Prison Policy Initiative. “That is essentially flushing money down the toilet,” she said.

These cards are often administered by correctional service companies like JPay, GTL, and the Keefe Group. The companies charge the same high rates to use the debit cards as they do to use other services such as video calls and e-messages, said Bianca Tylek, the executive director of Worth Rises, a non-profit exposing the commercialization of the criminal justice system.

JPay says the company does not profit from the release cards. Rather, the fees are imposed by the issuing bank. GTL declined to comment, and Keefe Group did not respond to requests for comment.

“Individuals who are coming out of prisons and jails are some of the most vulnerable people you could imagine,” said Sabarish Neelakanta, the litigation director at the Human Rights Defense Center, which is currently leading a class action lawsuit against release card companies. Many have been institutionalized for a long time, have shaky connections to social networks and face significant barriers to finding jobs and housing. “We add upon that a private company whose sole mission it is to prey on the limited amount of financial instruments that these individuals have when they’re released from prison,” he said.

Life after prison comes with added costs, too. In North Carolina, former inmates on post-release supervision must pay a fee of $40 a month. So in essence, $45 in gate money is enough to cover one month’s supervision fee—and not much else, explained Reid Cater, a staff attorney with North Carolina Prisoner Legal Services. Many people in prison are also required by the court to pay restitution to their victims as well as fees to their probation and parole officer. Missed payments could result in more prison time.

When Angelique Evans left prison in California in 2018, she used most of her $200 gate money to buy a cell phone so she could check in with her probation officer. Two weeks later, her probation officer told her she owed about $4,000 in fines and fees. Evans says she felt numb in that moment. She was scared of going back to prison, so she took on odd jobs to pay her debts.

“Don’t get me wrong, freedom is priceless,” she said. “But you know, at the same time, there’s things that you do need. And $200 simply does not cover that.”

Mia Armstrong Mia Armstrong is a writer based in Mexico City. In addition to The Marshall Project, where she formerly interned, her work has been published in the New York Times, Slate, Longreads, Nexos and Letras Libres. She has taught writing in prisons throughout Arizona.