Match my gift
Case in Point

The Navajo Nation Opposed His Execution. The U.S. Plans to Do It Anyway.

How Lezmond Mitchell became the only Native American on federal death row. 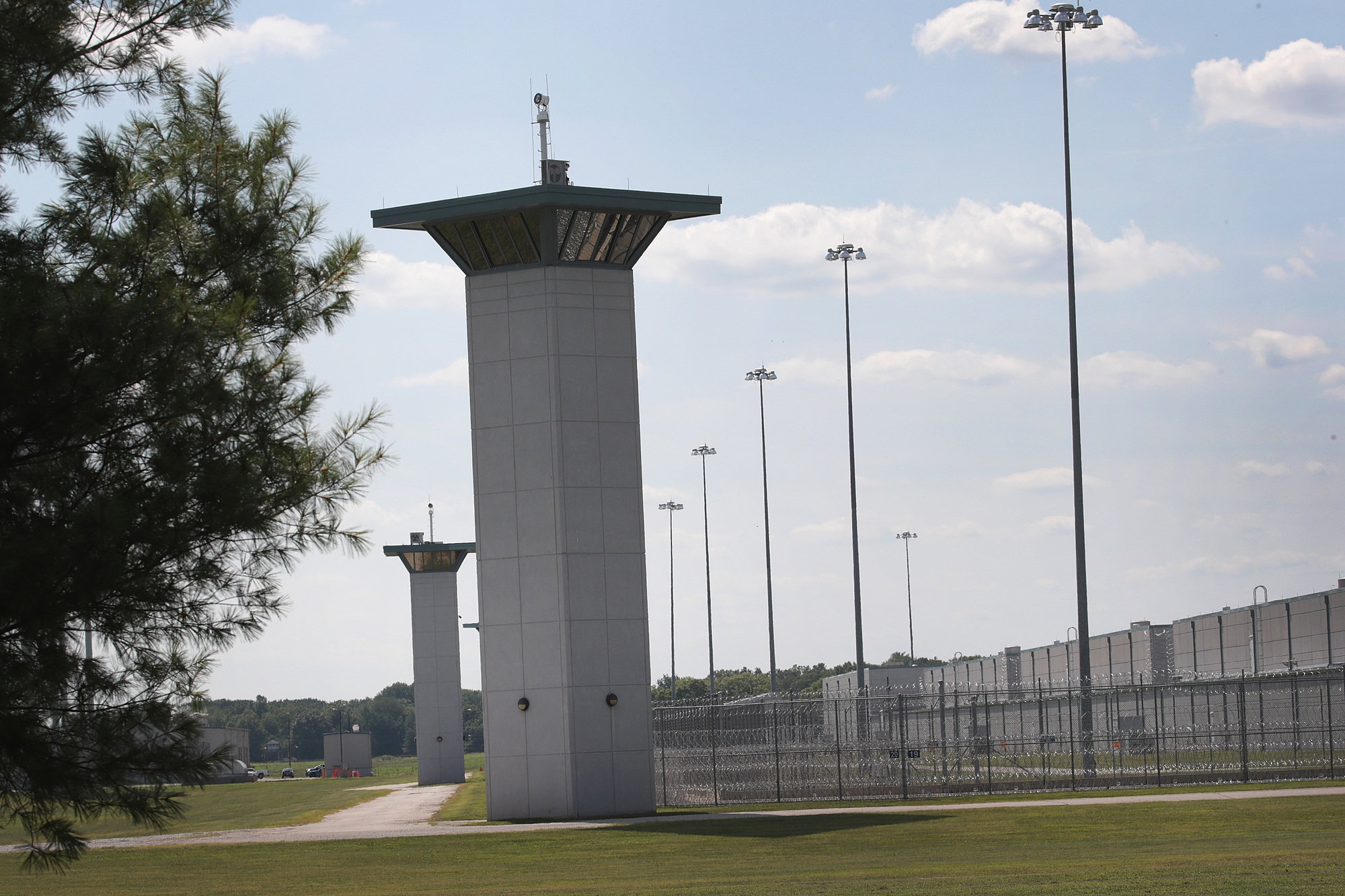 In 2003, Lezmond Mitchell was found guilty of carjacking and murder for stabbing a woman and her 9-year-old granddaughter on Navajo land in Arizona. Despite the gruesome nature of the crimes, the Navajo Nation, a federal prosecutor and even members of the victims’ family said they did not want the U.S. government to pursue the death penalty. But the Justice Department had other plans.

A mostly-white jury sentenced Mitchell—a Navajo man—to death, while his co-defendant, who was 16 when the crimes were committed, received life in prison. Mitchell’s life was then in limbo as the federal government ceased executions for nearly two decades.

That changed in July, when the Justice Department announced it would put Mitchell and four other men to death in December and January. “We owe it to the victims and their families to carry forward the sentence imposed by our justice system,” Attorney General William Barr said in a statement.

While the Justice Department’s press release included the gory details of Mitchell’s crime, it left out the tangled story of how he ended up as the only Native American on federal death row—and the ongoing legal fight to spare him. Although Justice officials claimed that all five men scheduled for execution have already exhausted their appeals, Mitchell has ongoing litigation. Last week, Mitchell’s attorneys asked a federal appellate court to stay his execution, saying that “allowing [it] to go forward with so many questions unresolved would be a grave injustice, as well as an affront to the values and sovereignty of the Navajo Nation.”

The Justice Department’s response is due Sept. 27.

Most criminal cases out of Indian Country involve thorny jurisdictional issues, but they are thrown into stark relief when the ultimate punishment is on the line.

In 2001, Mitchell and his co-defendant, Johnny Orsinger, hijacked the car of Alyce Slim, a Navajo woman, as she and her granddaughter were returning from a visit to a medicine woman in New Mexico. The men stabbed Slim dozens of times, put her body in the backseat next to her granddaughter, then drove to the mountains and killed the little girl. They dismembered and buried the bodies, and Mitchell used Slim’s truck to rob a reservation general store a few days later. A former attorney for Orsinger declined to comment.

After his fingerprints were found within the truck’s burned remains, Mitchell was arrested on a tribal warrant and detained at the Navajo jail. Court records show that Mitchell remained in tribal custody for 25 days before being appointed an attorney or appearing in front of a federal judge, even though federal law enforcement were involved and would ultimately take over the case. While at the tribal jail, Mitchell was questioned multiple times by FBI agents and ultimately confessed to the crime. According to records, Mitchell was read his rights and waived them when he agreed to speak.

Navajo Nation officials wrote a letter to the federal prosecutor assigned to the case in 2002 expressing their opposition to the death penalty for those involved in the murders, saying their culture and religion “instruct against the taking of human life for vengeance.” According to court filings, Slim’s daughter and the girl’s mother, Marlene Slim, also asked the prosecutor not to seek capital punishment. The prosecutor then told the Justice Department that he didn’t recommend the death penalty in this case.

Despite the tribe’s opposition, then-Attorney General John Ashcroft instead found a legal work-around. He pursued a death sentence for Mitchell on the grounds that he committed a carjacking resulting in death, a crime that falls under federal authority as it relates to interstate commerce.

After holding several public hearings, the tribe ultimately decided to opt out of the Federal Death Penalty Act entirely. That meant that any crime that was determined to be a federal offense only because it took place on their reservation could not be punishable by death. Marlene Slim testified to the tribal Public Safety Committee in favor of the decision. (Only one U.S. tribe, the Sac and Fox Nation of Oklahoma, has opted in.)

Ashcroft’s insistence on seeking the death penalty for Mitchell was unusual, as federal death sentences are often reserved for crimes of significant national interest. But Ashcroft had been a steadfast proponent of capital punishment. During his first year and a half in office, he went against federal prosecutors’ recommendations in a dozen cases to pursue a death sentence.

“It's clear that America is so concerned about the safety and security of its citizens that certain crimes against the people of this country have been designated as death-eligible by Congress,” Ashcroft said in a 2002 speech. He previously told lawmakers he was confident there was an “absence of any evidence of bias or racial discrimination in the federal death penalty.” Ashcroft did not respond to a request for comment.

Mitchell’s attorneys appealed his death sentence to the Ninth Circuit Court of Appeals, claiming that his initial lawyer had failed to show Mitchell may have been intoxicated at the time of the crime or to stress his history of mental illness, abuse and addiction to the jury. The court ruled against Mitchell in 2015, deciding that his defense had been adequate. But in a forceful dissent, Circuit Judge Stephen Reinhardt noted how “anomalous” Mitchell’s case was.

“The arbitrariness of the death penalty in this case is apparent … Mitchell, who was 20 years old at the time and had no prior criminal record, does not fit the usual profile of those deemed deserving of execution by the federal government—a penalty typically enforced only in the case of mass murderers and drug overlords who order numerous killings,” Reinhardt wrote.

Mitchell’s ongoing appeal, filed in March 2018 in federal district court, stems from the makeup of the jury that sentenced him to death. Only one of the 12 jurors was Native American. For security reasons, the government moved the trial to a court 100 miles away, making it more difficult for Navajo jurors to participate, his lawyers claim. According to court filings, many of the prospective Native jurors were struck because Navajo was their first language or because the death penalty was against their beliefs. Prosecutors tried to dismiss the remaining Native American from the jury but were blocked by the court.

Under-representation of Native Americans on federal juries is a common problem, due to factors such as geography, language and religious beliefs, said Jordan Gross, a law professor at the University of Montana who has studied the issue. “There are no federal district courts in Indian Country,” she said. “If I live hundreds of miles away from the federal court, and I don’t have a lot of money or resources, how am I going to get there for jury duty?”

Mitchell’s attorneys are now asking to interview former jurors to see if there were any signs of racial bias in their decision-making. Such interviews would be allowed if the case was being heard in Arizona state court, but they are often blocked in the federal jurisdiction where his case is being heard.

Slim’s grandson, Michael Slim, only found out that the execution had been scheduled when a reporter called for his reaction. He supported the death penalty when Mitchell was first sentenced, but has since changed his position. In August, he wrote to Mitchell to tell him he forgives him, and signed it: “Your friend. Your Navajo brother.”

“I don’t think he should die. It’s not my place or humanity’s place, it’s only God’s place,” Slim said in an interview. “There’s no reason another person needs to die because two people were hurt. That’s not justice, it’s revenge.”