For the past seven years, Dawn Harrington, 39, has been trying to get her voting rights back.

Her ordeal began on a 2008 business trip to New York City. Harrington, a Nashville native, says she was carrying a gun registered in Tennessee. But New York City doesn’t recognize gun permits from other states. Harrington was arrested, convicted of gun possession and sentenced to a year in city jail at Rikers Island. Afterward she returned to Nashville.

Unlike New York, Tennessee doesn’t automatically restore voting rights to people with felony convictions after they serve their time. So Harrington found herself caught in Tennessee’s byzantine rights restoration process, which required her to return to New York City to try and get paperwork signed. But on each trip city officials refused to sign her documents.

Like thousands of people in Tennessee, Harrington has been trying to navigate what experts say is one of the nation’s most complicated voting restoration processes. She estimates she’s spent close to $5,000 in the process, yet remained stuck in bureaucratic limbo.

“It just makes me feel like I am being silenced,” Harrington said. “And I am not alone. There are hundreds of thousands of people in Tennessee that are being silenced.”

Nearly 323,000 Tennesseans have completed felony sentences, but only about 11,500 have had their voting rights restored as of 2016, according to The Sentencing Project, a group that targets racial disparities in the criminal-justice system. More recent numbers are not available as Tennessee does not automatically track voting rights restoration. The state’s low restoration rate isn’t a sign of political apathy by the formerly incarcerated, says Blair Bowie, a lawyer who has been working on this issue in Tennessee with the Campaign Legal Center, a national organization working to strengthen the democratic process. It’s a result of an onerous restoration process that amounts to voter suppression, she says.

For starters, the state requires that court fines, fees and outstanding child support must be paid before registering to vote. But those who have tried to regain their rights, and organizers who are trying to help them, say the most daunting obstacles are often erected by the very people tasked with helping them—probation and parole officers, clerks and judges.

In 2018, the Campaign Legal Center launched a Restore Your Vote effort for people with felony convictions. When Ashley Caldwell, an organizer in Memphis, first started working with affected residents she said many thought a felony conviction barred them indefinitely from voting. She says probation and parole officers don’t explain the rights restoration process to people leaving state supervision.

Those same officers have to sign off on the voter restoration paperwork. It makes for a maddening bureaucracy. In Memphis, Caldwell says parole and probation officers often refused to complete the paperwork. They lack access to court records, so the officers say they can’t determine if someone is truly eligible. Records on court fines and fees and restitution are maintained by the clerk’s office. So for the better part of a year, Caldwell says, the officers would partially fill out paperwork indicating that people had completed their sentence and leave the rest of the document for the clerk’s office. But Caldwell says the clerks routinely refused to complete paperwork started by another agency.

Probation officers in Memphis even refused to sign the paperwork when people provided documentation from the courts waiving their fines and fees or putting them on a payment plan, Caldwell says. People can seek to have their fees waived by a judge, but they must get a waiver for each individual conviction in each court involved.

In a statement, officials in the Tennessee probation and parole office said officers fill out the “appropriate sections” of the certificate or restoration in accordance with state law. All new probation officers receive instructions on voting rights restoration during their basic training program, the statement said.

Kevin Phipps, public information officer at the clerk’s office in Memphis, says the office hasn’t received any complaints about the rights restoration process. He says clerks are responsible for filling out a section of the paperwork indicating people have paid off their fines and fees. But when the Campaign Legal Center surveyed officials in 27 of Tennessee’s 95 counties, they found few agreed on which office should fill out the paperwork.

There’s another wrinkle that adds to the complexity of Tennessee’s process: whether or not people actually lost the right to vote depends on the year they were convicted. The state constitution bars people convicted of “infamous crimes” from voting. Prior to 1973, the state spelled out those crimes. But people with convictions before 1973 may still be eligible to have their rights restored if they can show the courts did not consider the offenses “infamous” during sentencing. Anyone convicted of any felony between 1973 and 1981 never lost the right to vote. And after 1981, anyone convicted of a felony is ineligible to vote until they’ve finished their sentence and paid off all court fines, fees and outstanding child-support payments.

But Tennessee’s voter registration application doesn’t distinguish between convictions. All applicants must certify they have never been convicted of a felony in any state or in the federal system.

Easing the barriers to voting registration would require a change in the law. Earlier this year, two Republican lawmakers filed a bill to streamline the restoration process, but it was tabled until 2020. A statewide poll shows overwhelming support among Tennessee residents for restoring voting rights for people with felony convictions, with 60 percent of Republicans and 78 percent of Democrats in favor.

When Gicola Lane, an organizer in Nashville, reached out to officials in the probation office in June hoping to find a way to speed up the process, an official emailed her back saying she simply did not have time to meet and could accommodate individuals “when she found a break in her workflow.” For months Lane pressed for additional officers. In August, the office assigned more people to help with rights restoration, emails reviewed by The Marshall Project show.

Lane doesn’t think the public employees have bad intentions. Rather, she says probation and parole officers haven’t received proper training or information to help people navigate the restoration process. Lane says many public workers aren’t aware of their role in keeping the formerly incarcerated from getting to the polls.

“You not being willing to answer this phone, this email or take this appointment to just sign this paper—you are holding someone’s right to vote back,” she said.

Howard Gentry, Davidson County court clerk, says he is working closely with the probation office to ensure the process is completed in a timely manner. In addition, Gentry says the office will soon start advertising the restoration process and distributing a one-pager complete with names and phone numbers of the rights restoration staff.

“It's a crime in itself to create a structure that is so difficult to navigate,” Gentry said. “I struggle being a part of a system that does not provide people with the rights that the constitution allows.”

Sometimes residents are simply given the wrong information by election officials. When Earl Edwards, 41, tried to register for the 2011 mayoral election in Memphis, he was told he wasn’t eligible because he had a felony conviction. Edwards faced felony charges in 2001 for drug possession, but his case was diverted to drug court and his charges were dismissed after he completed the diversion program. Yet, for the past eight years, Edwards has checked “yes” on forms asking if he has ever been convicted of a felony, making it hard for him to get work and housing.

“I was distraught,” he said.

Because of felony disenfranchisement laws, nearly 21 percent of the state’s African American community can’t vote, according to the Campaign Legal Center. While it represents a small percentage of the overall electorate, the disenfranchisement nonetheless has a huge impact on local elections, including voting for district attorney, judges and sheriffs, says Sekou Franklin, associate professor of political science at Middle Tennessee State University.

Franklin says research shows that communities with high incarceration rates are given less attention by political organizations and that political parties are less likely to mobilize around criminal justice issues in neighborhoods with large numbers of incarcerated people.

“The impact is devastating,” Franklin said. 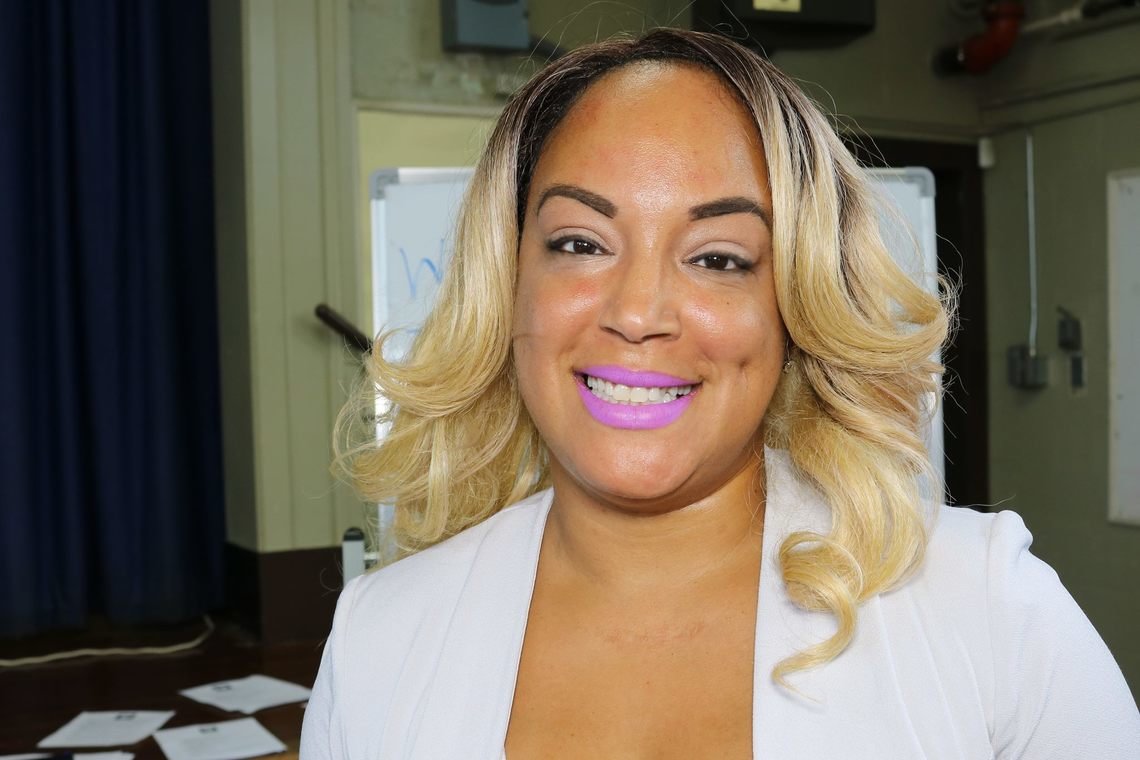 Dawn Harrington, who was incarcerated for a year at Rikers Island, is still trying to get her voting rights restored in Tennessee’s byzantine process.

While hundreds of thousands of formerly incarcerated people are still ensnared in the complicated process, Harrington’s seven-year quest for her voting rights could finally be coming to a close.

After The Marshall Project reached the New York City Department of Corrections for comment on her case, the department said requests like Harrington’s are “very uncommon,” but that they would “gladly assist any former inmate with restoring their voting rights.”

“I just feel just a little more free,” said Harrington upon finding out New York City officials are willing to sign her paperwork. “It just gives me hope for all the other people that are so frustrated and ready to give up. Just don’t give up. You never know when that one thing will happen.”

This story was updated Sept. 23 to add a statement from the Tennessee probation and parole office.