One Roadblock to Police Reform: Veteran Officers Who Train Recruits

Field trainers "are part of the old guard of the department. They teach the old way of doing things."

Andrew Rodriguez was just out of patrol school, eager to learn how to use his academy training in the real world, from real sheriff's deputies in Los Angeles County.

But what his field trainers tried to teach him, he testified in September, was how to be a bad cop: to lie that he had found a meth pipe in a suspect's pocket, to harass Black people for no reason, to threaten women into giving up information. When he wouldn't go along, Rodriguez said, the trainers bullied him.

Field trainers "serve as gatekeepers for this fraternity where lying and illegal stops are encouraged and rewarded," said Alan Romero, a civil rights lawyer who represented Rodriguez.

The Los Angeles County Sheriff's Department denied Rodriguez's claims. But a jury believed him, and in October it awarded him $8.1 million for workplace harassment.

For decades, cities have tried to change the cultures of their police departments, bringing in progressive chiefs and mandating programs to teach officers to become more compassionate and less violent.

For the most part, it hasn't worked. More than a thousand people a year have died at the hands of the police since 2013. Black people, Latinos, military veterans and individuals suffering from mental illness are most likely to face lethal force, federal research shows.

Field training officers are a big reason problems persist, according to current and former police leaders, academics and even the U.S. Justice Department.

It's not uncommon for trainers, known as FTOs in cop-speak, to have histories of misconduct and citizen complaints, according to a Marshall Project review of 10 big-city departments. The trainers get little formal instruction in how to mold young officers' behavior. Becoming a field trainer is seen as a mark of prestige and seniority, rather than a serious and challenging job, law enforcement officials said.

Critics say the low standards create poisonous field training programs that fuel a toxic street-cop culture, marked by too much aggression and too little accountability. Since 2011, the Justice Department has ordered at least five major cities to revamp how they run field training.

Training problems have continued despite nationwide protests against police brutality, especially against Black people. In fact, field trainers have been involved in many of the deaths that have prompted demonstrations over the last six years.

Minneapolis police Officer Derek Chauvin was a trainer; as his pupils watched, he kneeled on George Floyd's neck for more than 8 minutes.

"What was my client supposed to do but follow what his training officer said?" a defense lawyer, Earl Gray, asked during a court appearance for one of Chauvin's trainees, Thomas Lane. Lane is charged with aiding and abetting Floyd's murder. 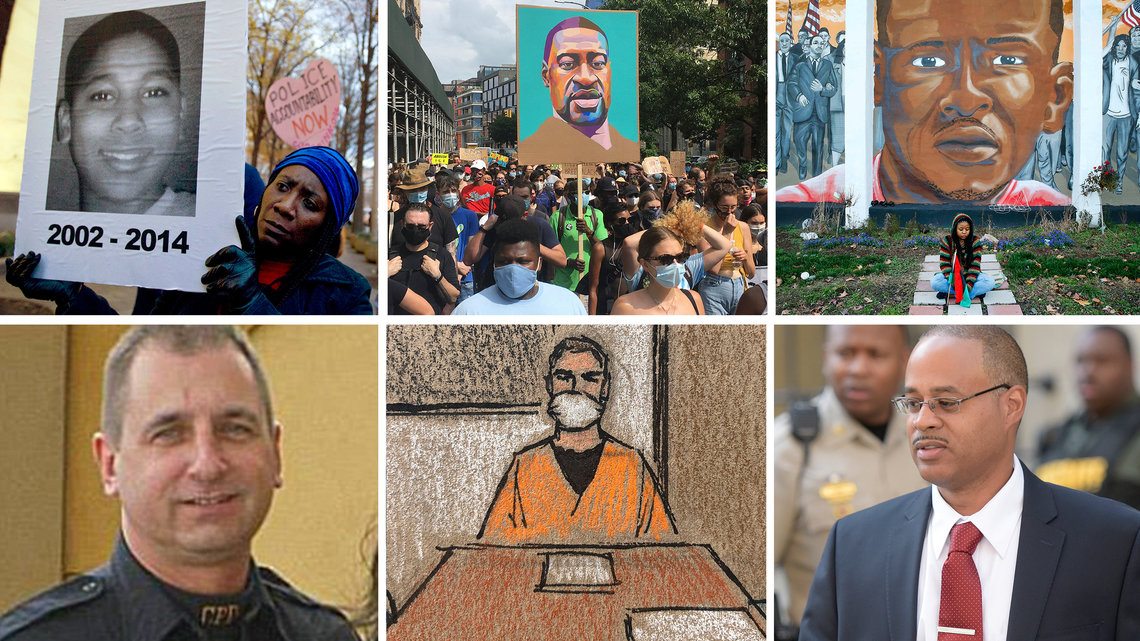 In Cleveland, the cop who drove up to 12-year-old Tamir Rice on a cold November morning in 2014 was a trainer. Officer Frank Garmback was teaching Timothy Loehmann when a 911 dispatcher asked the pair whether they could check out a report of a man with a firearm outside a recreation center.

As they approached, Garmback warned, "Watch him, he's going to run," according to Loehmann's written statement released by local prosecutors. Loehmann got out of the car and shot and killed Tamir two seconds later. The boy was playing with a BB gun.

A grand jury declined to indict Garmback and Loehmann. Sgt. Jennifer Ciaccia, a police department spokeswoman, confirmed that Garmback is still on the force, but she said he no longer works as a trainer. Through his lawyer, Garmback declined to comment.

In Baltimore, Caesar Goodson Jr., a field training officer working an overtime shift, drove a police van with Freddie Gray in the back in April 2015. Local prosecutors said Goodson gave Gray a "rough ride," failing to buckle his seat belt. Gray died from a severe spinal injury days after his arrest for carrying a small knife.

Goodson was charged with second-degree murder. During closing arguments, prosecutors contended that as a training officer, Goodson "knows more than the ordinary, average police officer" and could have prevented Gray's injuries. A judge acquitted Goodson, who has returned to work at the police department.

Sean Malone, a lawyer who represented Goodson, told The Marshall Project that the department never updated Goodson about the proper procedures for prisoner transports. A second officer, Edward Nero, was also acquitted after his training officer admitted that he didn't teach Nero the proper way to transport a suspect.

"There is a bigger systemic issue, and that's with the training of officers," said Malone, who was chief counsel for the Baltimore Police Department before going into private practice.

Field training programs date to President Lyndon B. Johnson's 1967 plan to combat crime, which detailed criminal justice reforms, including having police recruits shadow veteran officers out on patrol. "All training programs should provide instruction on subjects that prepare recruits to exercise discretion properly, and to understand the community, the role of the police, and what the criminal justice system can and cannot do," the plan said.

San Jose, California, was the first big city police department to create a field training program; such programs swiftly became fixtures in departments across the country, said Ryan Getty, a former cop who has worked as a trainer and is now a criminologist at California State University, Sacramento.

He and other policing experts said the biggest failure of the programs is that departments allow officers with questionable backgrounds to mentor new hires. Chauvin, for example, racked up at least a dozen complaints during his 19 years on the Minneapolis force without being disciplined.

"They pass on that socialization of 'I don't care what you learned in the academy; this is how you do it on the street,'" said Getty, who is writing a textbook on field training.

In his academic research on field training officers, Getty found that if young officers drew citizen complaints within their first two years on the job, it was likely that their trainers had histories of allegations filed against them. "There is a definite association between FTOs and their issues and the trainees' later success or deviance in their careers," Getty said.

If Americans have heard about training officers at all, it may be because they've watched "Training Day," the 2001 movie in which Denzel Washington played a corrupt narcotics officer. The reality is a lot less spectacular — but still troubling to policing leaders.

Before recruits can work as officers, they attend police academies, which generally offer four to six months of classes. Then they become trainees on probation, who are easy to fire. Trainees usually don't chase violent 911 calls unless no other patrol officers are around, but as the shooting of Tamir Rice showed, they aren't exempt from responding to complex situations.

There are no national standards for how long a young officer should work under the direction of a veteran. In Baltimore, the program lasts 10 weeks, while the Los Angeles Police Department's program lasts a year.

Most departments reviewed by The Marshall Project, even those under court supervision, allow officers with allegations of aggressive behavior against them to become trainers. The 2019 rules to become a training officer in Chicago call for candidates with "an acceptable disciplinary record."

Chicago cops can qualify to train new hires as long as they haven't had recent suspensions at least a week long and haven't racked up more than three suspensions of any length within five years. Officers who were named in complaints but weren't disciplined are also eligible.

In 2011, the Justice Department described training officers in New Orleans as "unqualified and unsuitable to supervise and train recruits." Federal officials later made similar findings in Cleveland, Baltimore, Chicago and Albuquerque, New Mexico.

In court-ordered reform plans, called consent decrees, Justice Department lawyers then mandated boilerplate fixes, including requiring trainers to get 40 hours of instruction and to have regular evaluations.

Jonathan Smith, a former chief of special litigation for the Justice Department's Civil Rights Division who worked on investigations involving field training, said the mandated changes barely chipped away at the problems.

"Far too often, FTOs have been in a department with a culture that needed to be reformed, and they are not part of the reform process," he said. "They are part of the old guard of the department. They teach the old way of doing things."

To weed out antagonistic older cops, federal officials in Albuquerque directed the police department to lower the experience requirement for prospective training officers from four to three years on the force.

"The best way to reset an agency is with new officers coming into patrol being taught how to do things the right way," according to Baltimore's 2019 Field Training Officer Plan. "The FTO should be a role model the trainee will pattern their career after and refer to with pride."

Still, a potential trainer in Baltimore can have a history of abuse as long as it didn't occur within the last three years, the documents show. Baltimore police didn't respond to multiple requests for comment.

"You want to avoid officers who have had a lot of complaints against them, because that indicates a pattern of problems with how they are dealing with people in the community," he said.

One potential model for field training is the Grand Prairie Police Department, in a suburb west of Dallas. Applicants for training posts appear before a group of trainers and their supervisors, who pepper them with questions about why they want the job. Once accepted, training officers go through 120 hours of instruction, triple the amount in Baltimore, and teach in the academy.

In Los Angeles County, authorities are appealing the $8.1 million verdict in favor of Andrew Rodriguez.

Meanwhile, another deputy has filed a complaint against the county involving the field training program. Deputy Austreberto Gonzalez, who was a field trainer, said he was ousted from the position by racist deputies who call themselves "The Executioners" and wanted a member of their gang to train and indoctrinate new hires.

The sheriff's department didn't respond to requests for comment, including questions about whether it has changed its field training operations. County officials haven't responded to the complaint.