5 Takeaways From Our Investigation of Indianapolis Police Dogs

It has the highest rate of bites per population among the largest cities in the U.S. 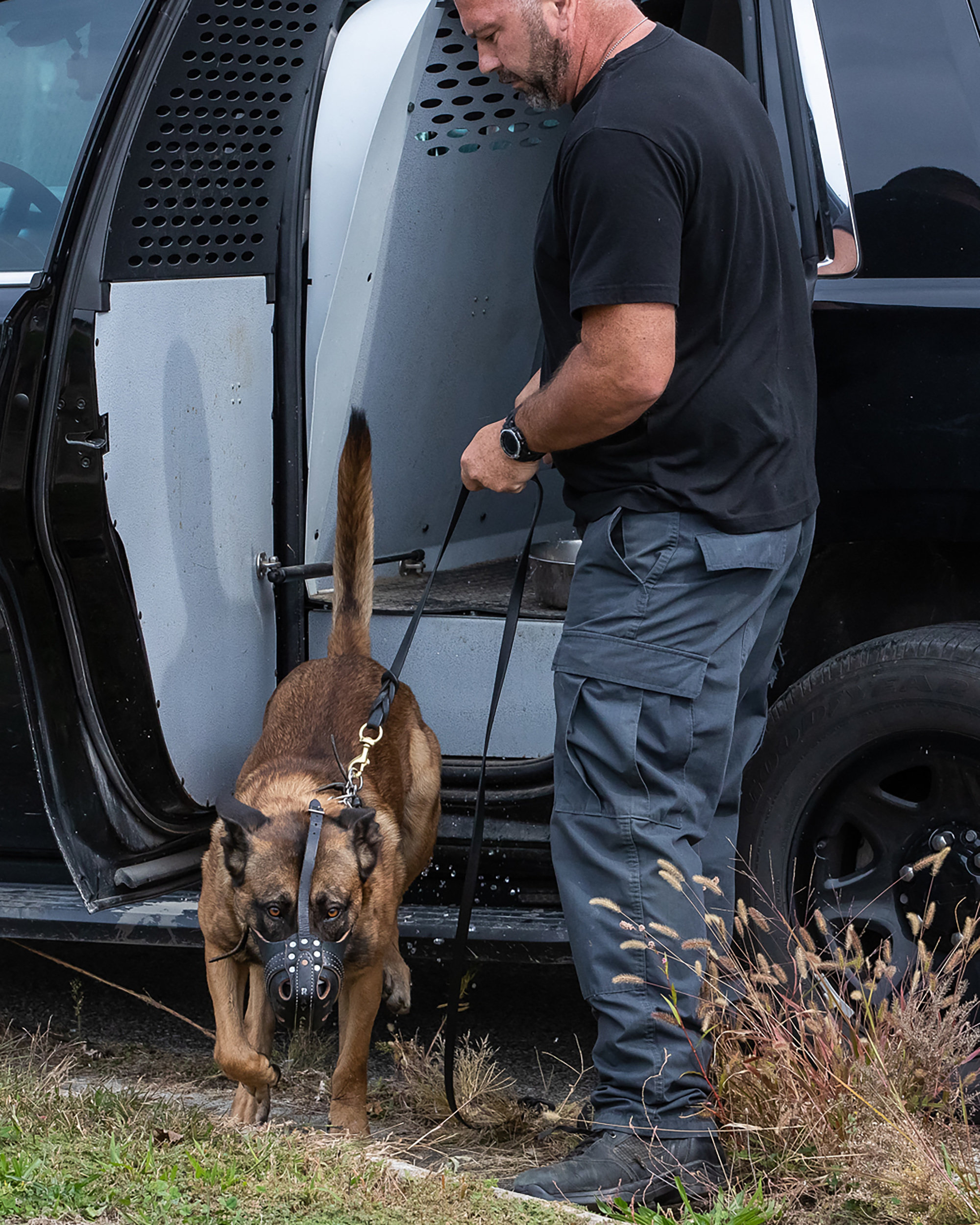 In Indianapolis, police dogs are biting people at a rate unseen in the other largest 19 U.S. cities.

And it’s not even close. Whereas some major cities such as Chicago and San Francisco saw one bite over the last three years, Indianapolis saw one every five days.

Those are some of the biggest takeaways from a yearlong investigation by journalists at IndyStar, The Invisible Institute in Chicago, The Marshall Project and AL.com.

The news organizations are collaborating in a series titled “Mauled: When police dogs are weapons.” The first story, published last week, began exploring the hidden world of police K-9 units.

Here are some of the key findings:

Most people were unarmed

IMPD, like many other police departments, use police dogs to track down people on the run. Once the dogs find the person, occasionally hiding among some brush or in a shed or in any other number of places, K-9 officers often rely on dogs to rush in and bite the person to subdue them as part of an arrest.

If these suspects did not resist arrest, IMPD leadership says, then a dog bite would not be necessary. IMPD repeatedly defended its high number of dog bites by emphasizing how dangerous it is to be a police officer. 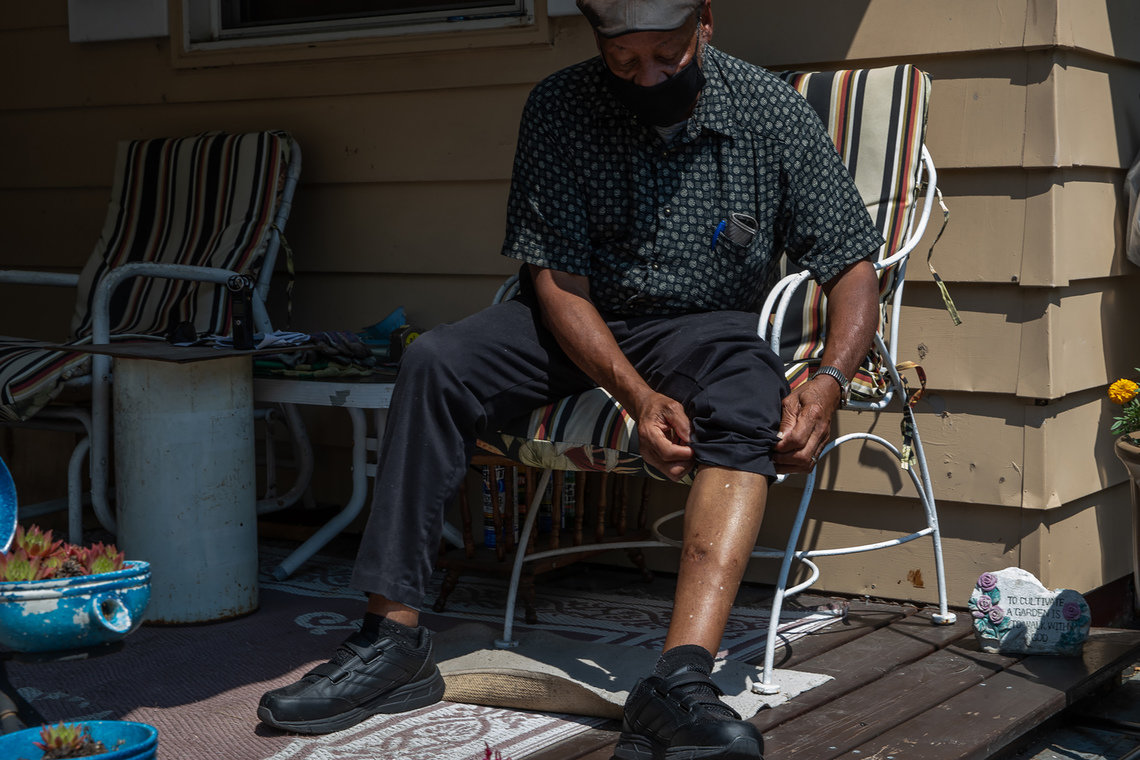 As it turns out, the investigation revealed that most people bitten by an IMPD K-9—at least 65 percent of those bitten—were unarmed and not acting violently.

Journalists reviewed thousands of pages of use-of-force reports, police records and court documents to arrive at that figure.

One civil rights attorney, who acknowledged K-9s can be necessary in some situations, believed police dogs are used often as a form of street justice.

"What I find is that police officers let the dog chew on the person,” said Mike Sutherlin, who has represented someone bitten by K-9 in Hamilton County, “to teach him a lesson for running."

IMPD’s high number of bites can be attributed, in part, to the department’s lax policy governing the use of police dogs. Some other major police departments take a different approach—and their bite numbers are much lower. 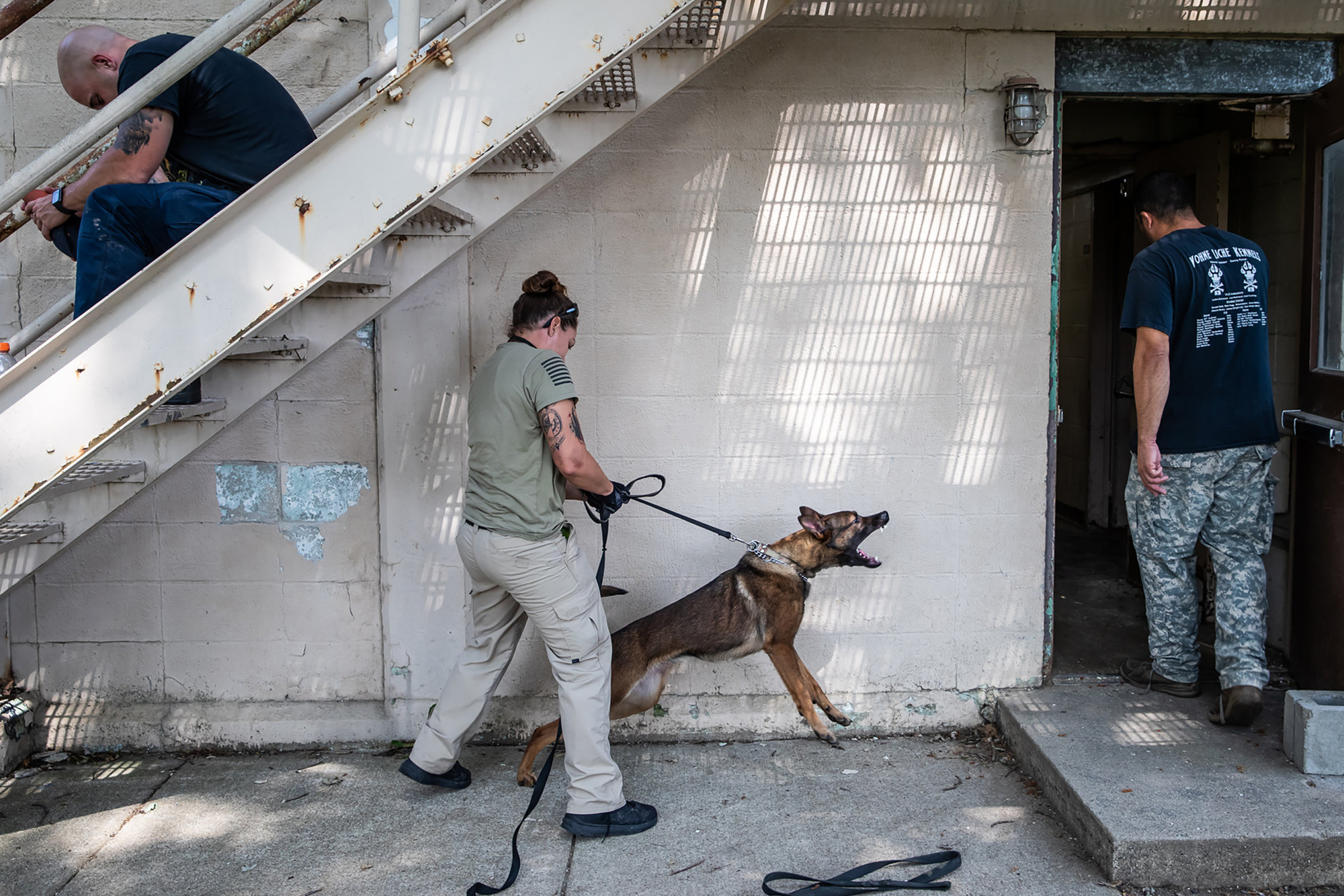 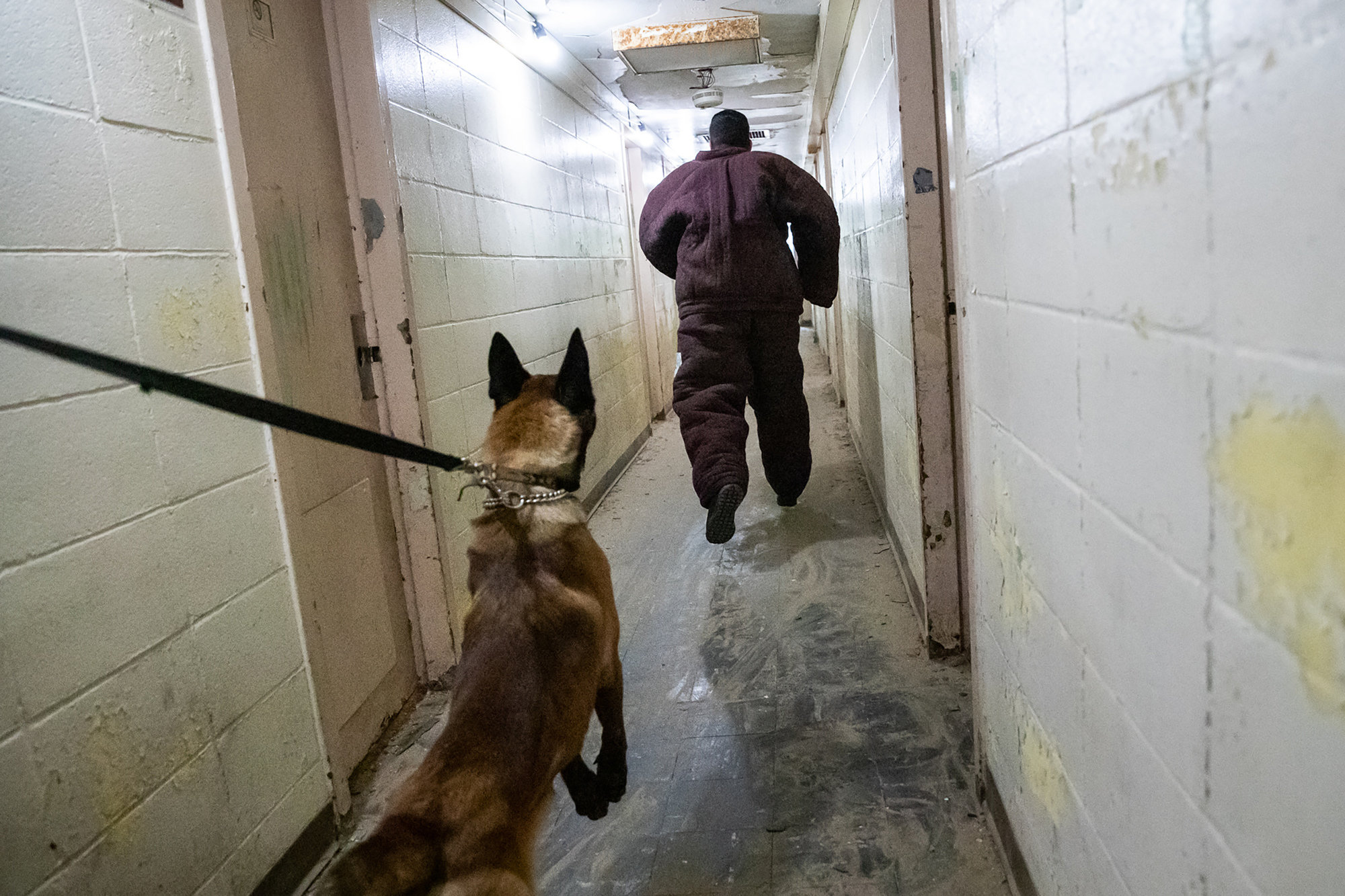 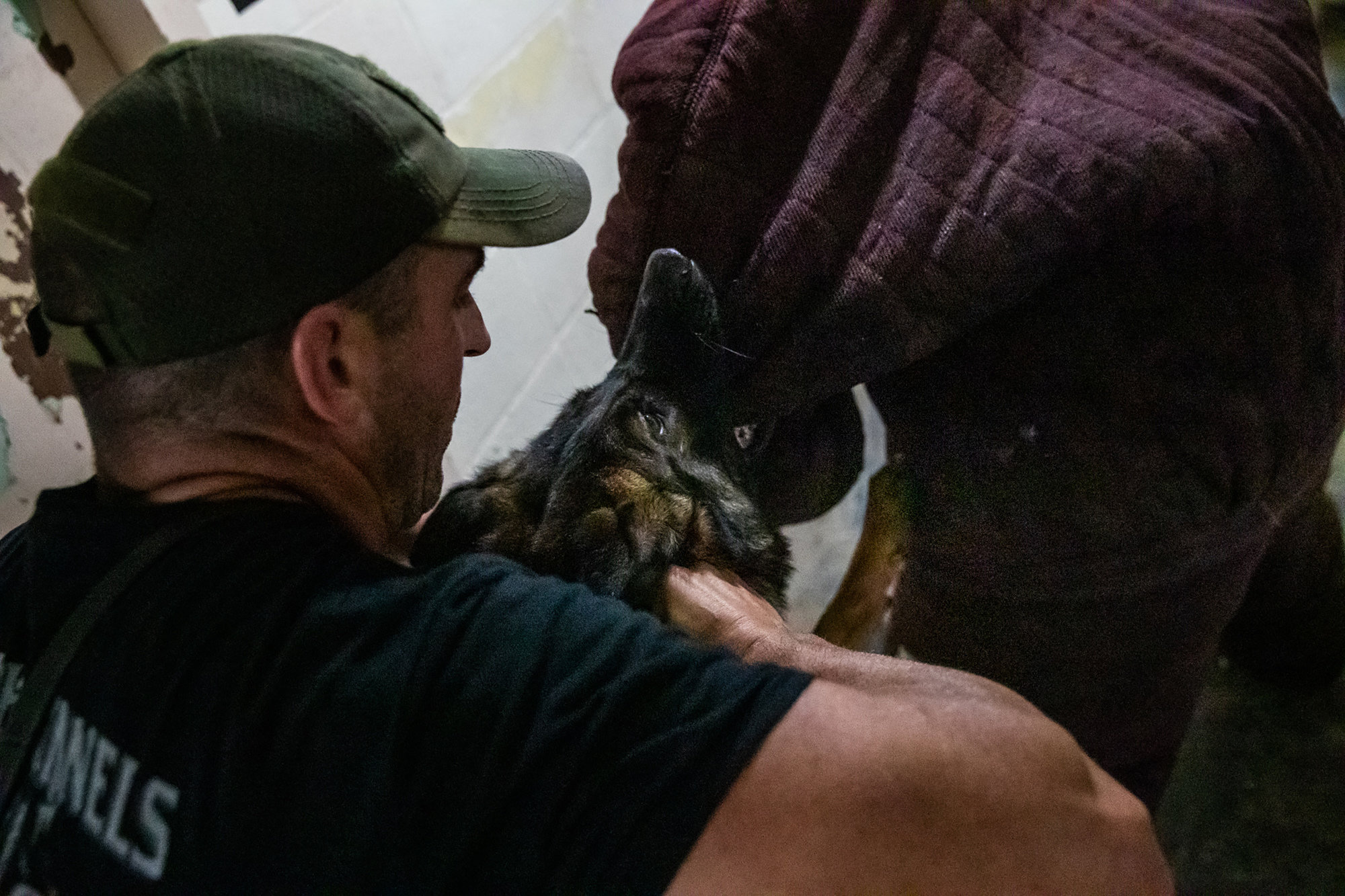 Benjamin Sota, a K-9 trainee from a Las Vegas casino, acts as a decoy during police dog training at Vohne Liche Kennels on Wednesday, Sept. 9, 2020. "Men, when they're running from the police or a dog, they kick out a certain scent," said Ken Licklider, owner of the kennel. "These dogs learn very quickly that when they smell that scent that their prize at the end is going to be to apprehend that guy." Mykal McEldowney/IndyStar

Adam Elliott, of the Stillwater Police Department in Oklahoma, works to release his K-9, Rotex, from a bite on a person acting as a decoy during training at Vohne Liche Kennels on Wednesday, Sept. 9, 2020. Mykal McEldowney/IndyStar

In New York, for example, K-9 deployments are restricted largely to felony cases. NYPD has just 10 percent of the bites of IMPD.

The police departments in Seattle and Washington D.C. have even stricter policies. They limit the use of police dogs to serious felonies or specific violent crimes. If IMPD implemented similar rules, nearly 60 percent of the police dog bites would be out of policy.

There are several other ways IMPD could reduce the number of bites. For example, in an effort to minimize unnecessary bites, Seattle urges officers not to use dogs on minors or people under the influence of drugs or alcohol except under a few circumstances, such as if a violent crime has occurred.

Dogs were used even for petty crimes and traffic infractions

IMPD officers are sending police dogs to bite people suspected in some of the most common and lowest-level crimes found in any city.

One man was passed out behind a public library branch and then ran when a police officer woke him up. Another man shoplifted three bottles of alcohol from a department store. Yet another swiped a $5 tip from a table at a pancake restaurant.

IMPD officers commanded their dogs to bite each of those people.

Many other bites begin with routine traffic stops. Reporters found numerous examples of people who were drunken driving or not coming to a complete stop at a stop sign or driving without a license or driving a moped without a headlight.

All of those people were bitten by K-9s after they fled from the traffic stops. None had weapons; none threatened officers or anyone else.

"If you're going to put a dog on somebody, it should be reserved for people who have committed or are committing serious crimes," said the Rev. David W. Greene Sr., president of the Concerned Clergy of Indianapolis, "not because somebody rolled through a stop sign."

These are not the bites of a pet dog. Many police dogs are trained for weeks on how to lose any inhibition to see people as prey—and how to bite harder and faster and with little reservation.

The results, if left unchecked, can be devastating.

In Minnesota, in 2017, a police dog ripped away at least a third of the scalp of a homeless man who was asleep under a tree. In Lafayette, western Indiana, a police dog in May bit into a man's neck for 30 seconds, ripping into his trachea and cutting the man’s artery. 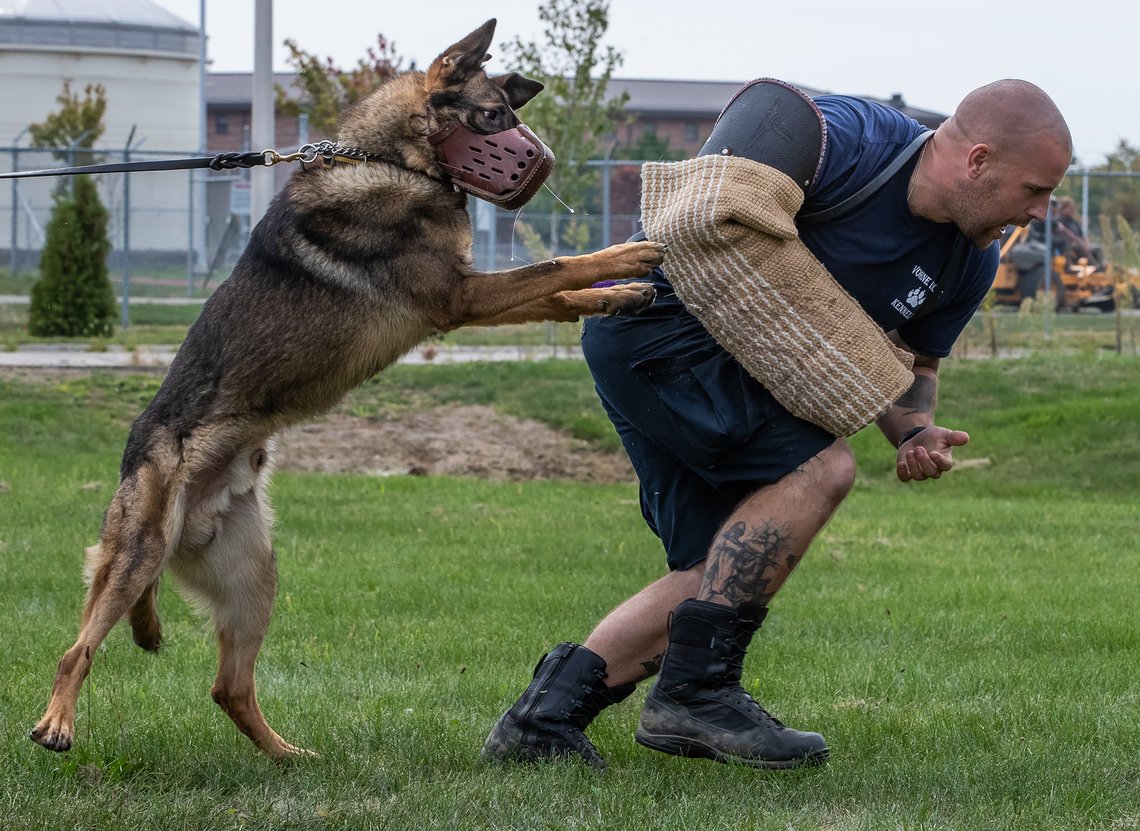 A dog lunges at a man acting as a decoy during training at Vohne Liche Kennels in Indiana.

Police dogs on rare occasions have even killed people, including in Alabama, where a man died of a ruptured artery in his thigh after a bite in July 2018.

To what extent such injuries are occurring in Indianapolis is unclear. IMPD declined to release records that would describe the nature of their dogs’ bites in detail.

And unlike most other major police departments, where such incidents are routinely caught on video, IMPD does not have dash cameras on most patrol cars, and IMPD has for years decided against a body camera program.

More than half of those bitten in Indianapolis are Black, which is a disproportionately high number compared to the Black population in the city.

The disparity is even starker among people bitten who are younger than 18. Three-fourths of them are Black.

The figures, while not necessarily surprising to Black leaders interviewed for the investigation, were still painful to hear because of the legacy of police dogs in America.

Starting in the 1700s, dogs were used to hunt enslaved people who had escaped. In the civil rights movement in the 1960s, police attacked demonstrators with dogs.

"White people and Black people, generally speaking, tend to have different approaches to animals, particularly domestic dogs and K9s, simply because dogs have been used as a tool of state violence against people because of their race," said Tyler D. Parry, an assistant professor of African American and African diaspora studies at the University of Nevada in Las Vegas. "The utilization of a K-9 against a Black suspect hearkens back to an era where Black people were viewed as a lower order of human."

Have you been bitten by a police dog? Tell us your story.