We Investigated How Police Use Dogs as Weapons. Here’s How You Can Do It Too.

Our top tips for journalists from the partnership that produced “Mauled.” 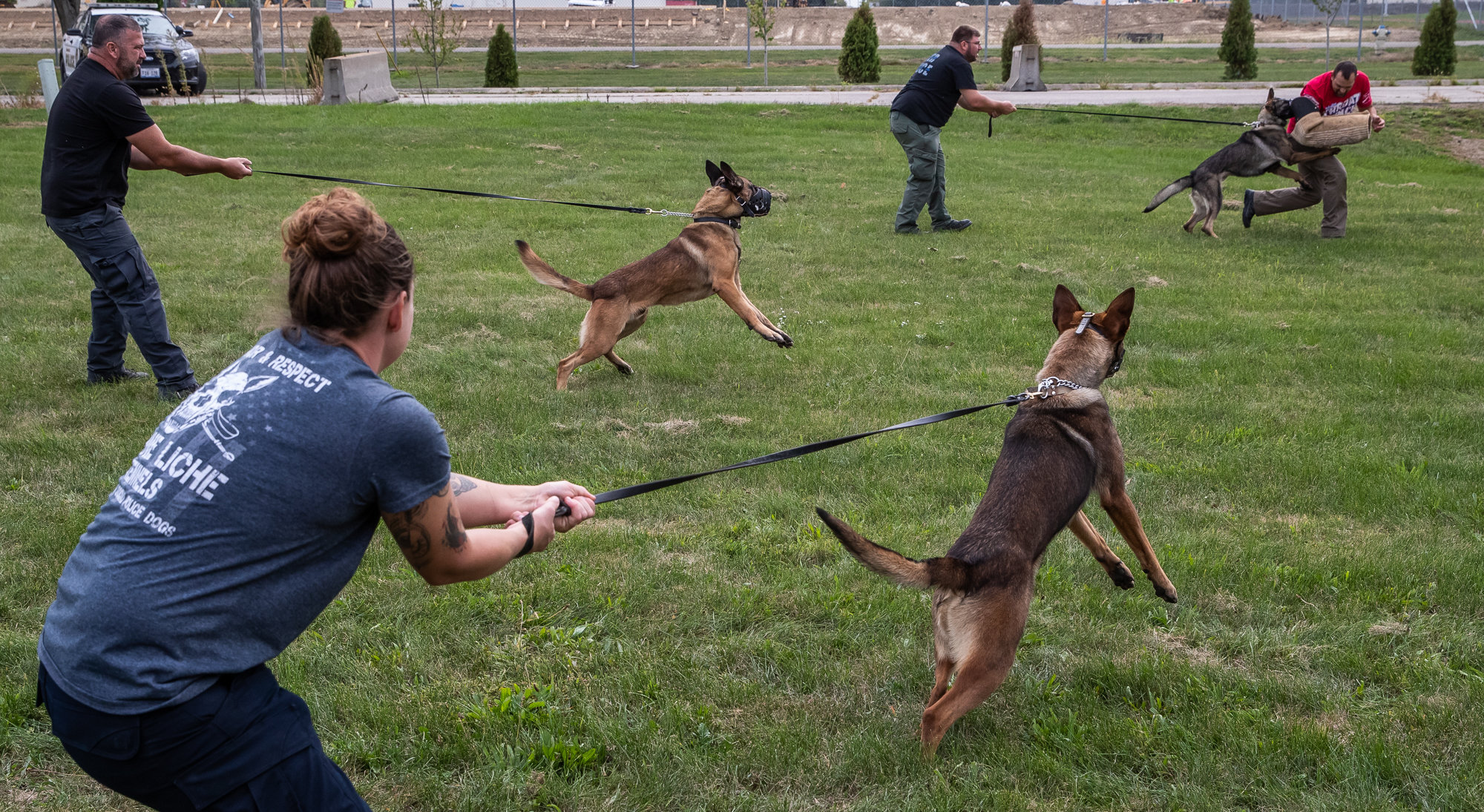 Law enforcement officers from around the United States train with their police dogs on how to capture a suspect at Vohne Liche Kennels, in Indiana, on Sept. 23, 2020. Dogs are muzzled for the protection of the man acting as a decoy, who is not wearing typical bite gear for this training exercise. Mykal McEldowney/IndyStar
By The Marshall Project

When we began publishing the “Mauled” project about the dark side of police K-9 units, we also began hearing from reporters around the country. They were wondering if the problems we described—officers using dogs as weapons to catch, bite and injure people—were happening in their communities, and how they could prove it.

Our answer to the first question was, “Probably,” especially if there has been at least one questionable bite in the community. Our reporters found more than 150 cases over the last five years in which police dogs inflicted serious injuries not only on suspects, but also on bystanders, children, police officers and dog handlers. The incidents occurred across the nation, from Alaska to Alabama, Connecticut to California.

But the use of dogs varied widely among the police departments for which we got data through public records requests; cities like Chicago and San Francisco reported only one bite each, while in Indianapolis police dogs bit someone every five days.

As for how to prove it, that takes a commitment to collecting and crunching data, gathering cases and interviewing a lot of people. One place to start looking is the database we compiled of serious incidents, which is searchable by state.

Here are our other tips for landing a great story:

Court records can be key. People who have suffered severe dog-bite injuries sometimes file lawsuits in federal or state courts contending that police violated their civil rights. Our project began with AL.com in Alabama, where Challen Stephens had heard about a single police dog in Talladega that sent nine people to the hospital with gruesome wounds in just one year. After reading thousands of pages of court records, Stephens learned that the dog chased down and mauled people whose “crime” was usually running from the police, in a city where Black residents in particular feared interacting with officers.

“I had no idea they used dogs this way,” Stephens says. “I was like everybody else, I thought police dogs were friendly and sniffed out the bad guys.”

He turned to The Marshall Project for help in figuring out whether Talladega was unusual, or whether many departments deployed police dogs to bite and hold people. Abbie VanSickle, our investigative reporter in California, started to look through news reports and court records across the country and found dozens of incidents in the last five years involving law-enforcement agencies. She discovered that some lawyers specialize in dog-bite cases, and by running their names through PACER, the electronic records system for federal courts, was able to find cases that had not drawn media attention. She also combed through lawsuit notices and settlements that local governments paid to people who were bitten, which are often available through city or county attorneys’ offices.

Use-of-force data can also be a good place to start. Andrew Fan at the Invisible Institute in Chicago had been looking at big-city departments’ tallies of how often they used force and in what circumstances. When he analyzed what he saw in Indianapolis, he was struck by several trends, including one involving K-9 units: “what seemed to be a lot of bites.” A team of reporters collected and analyzed similar data for the police departments in the 20 largest cities in the United States, and adjusted it for population size. They also went back to each agency to fact-check the results.

One caveat: not all agencies keep this data, and they don’t keep it the same way. For decades, the federal government has been trying to encourage law enforcement agencies to collect and share information on incidents that result in death or bodily injury or involve the discharge of a firearm. But only about 40 percent are doing so, according to the FBI.

You can also try requesting K-9 specific records. We asked dozens of departments for information about how often they used police dogs and how often the dogs bit people. There is no standard way for keeping these records, though, and what we got back was all over the map. Deployment data turned out to be particularly tricky; some departments defined deployment as having a dog on the scene, even if the animal never left its handler’s vehicle; others said a dog was deployed only if it chased and caught a suspect. In the end, we focused only on the number of bites. For a detailed walk-through of how we collected, analyzed and bullet-proofed the data, you can take a look at this video produced by The Marshall Project’s data editor, David Eads. We also requested departmental policies on canine use; those with vague language suggested that some departments gave officers a lot of leeway and were probably worth a close look.

Reviewing underlying documents can be the most time-consuming part of the process. We collected incident reports, affidavits, arrest reports and, when possible, video footage for the cases we examined. What agencies must disclose through public records requests varies a lot by state; Arizona requires law enforcement to release a lot, Alabama in practice allows agencies to keep information under wraps. For departments with a lot of bites, reviewing and organizing the documents can be daunting; Ryan Martin of IndyStar and Dana Brozost-Kelleher of the Invisible Institute spent almost a year digging into records from the Indianapolis Metropolitan Police Department.

Understanding context can be a challenge. K-9 units have their own customs, traditions and language. Dogs live with their handlers and are often treated as trusted partners and family members. Understanding that emotional bond, and the training the dogs and handlers go though, is important. VanSickle recommends trying to find an agency or kennel that will allow you to observe dogs as they are being trained. She also suggests talking to former K-9 officers who have become expert witnesses in court. Whether they tend to testify for the police or for plaintiffs, these experts “have seen hundreds of cases, speak the language and can translate it for juries,” she says.

Finding and interviewing dog-bite victims takes patience and tact. Many people who have been bitten by police dogs describe it as extremely traumatic and are unwilling to revisit the experience; we had the most success in reaching them when we used family or lawyers as intermediaries. But some were eager to tell their stories in hopes that it will help change the way police use dogs in the future. Videos of police dog attacks and photos of the terrible injuries they inflict can be shocking. We published videos and photos only when the victims agreed.

Prepare for some push-back. It’s hard for people to understand how severe police-dog bites can be, which is why we ended up publishing videos shot by bystanders as well as from police dashboard- and body-cameras. The recorded scenes clash with the public image of the dogs that many departments promote.

“The police dog has a heroic mythology about it,” says Martin of IndyStar. “Sometimes I can feel like a spoilsport. And I love dogs.”