A Civilian's Guide to Insurrection Legalese

Everyone's talking about sedition, treason and conspiracy. Here's what these terms actually mean and how they've been enforced. 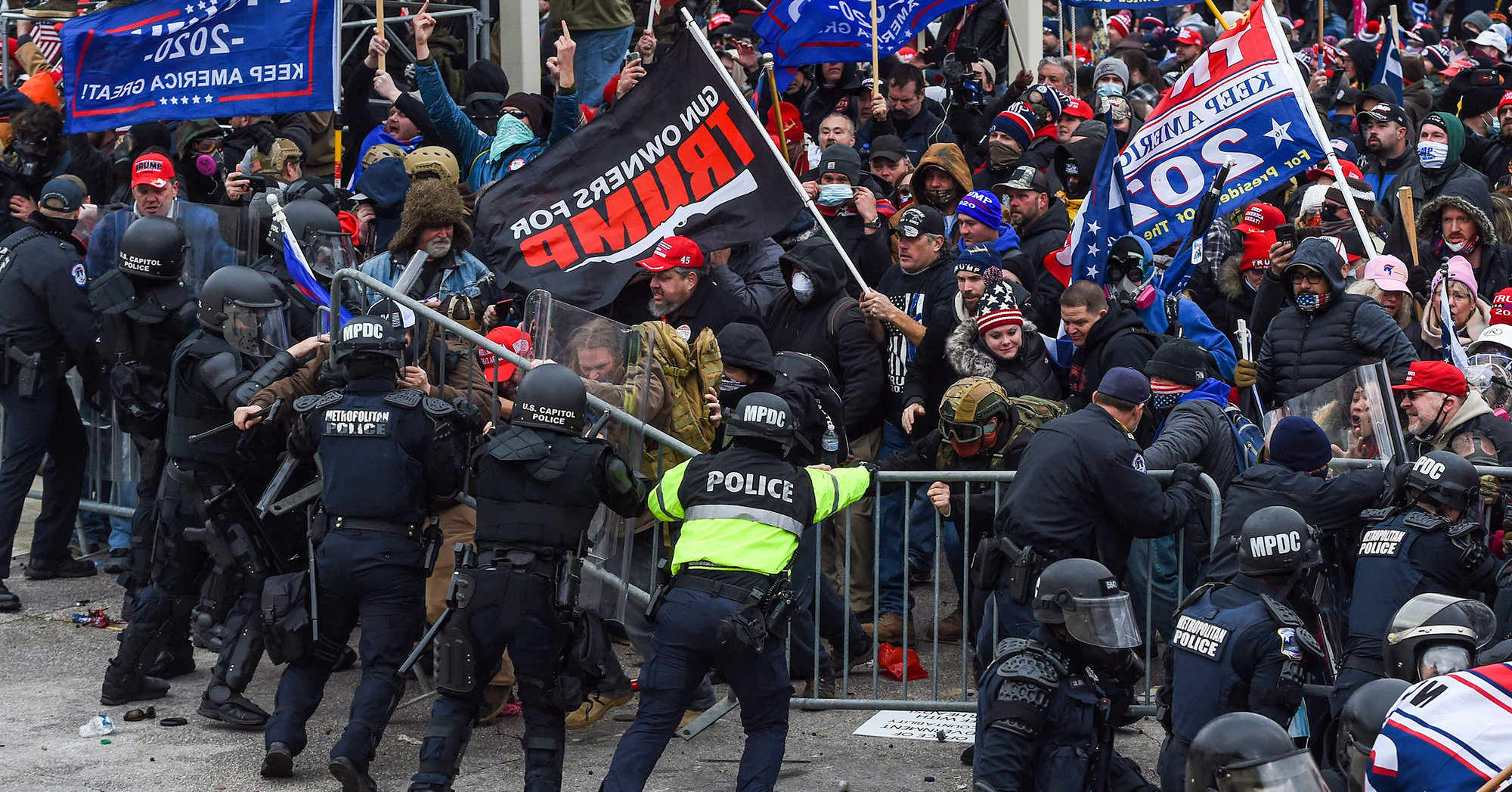 A pro-Trump mob clashes with law enforcement officers during the assault on the Capitol in Washington, D.C. on January 6. Roberto Schmidt/AFP, via Getty Images
By Eli Hager, Maurice Chammah and Christie Thompson
The Lowdown breaks down the rituals and routines of the criminal justice system.

In the 24 hours since a mob incited by the president of the United States stormed the Capitol attempting to halt the functioning of American democracy, the news media and everyone else have been at a loss for words to describe what happened. Was it a coup, or an insurrection? Did anyone commit treason, or sedition? What exactly does it mean to incite a crime, or to riot?

These aren’t just word games. Knowing how these terms are specifically defined under federal law will have consequences for the most violent of the rioters who have been or could be arrested by federal authorities—and also for Donald Trump and others who instigated the crowd’s actions.

To be sure, the most likely federal charges that could be levied against Trump supporters fall under the broad—and less serious—ban on committing “unlawful activities” on Capitol grounds, from “violent entry” to property destruction to disorderly conduct.

Here’s a Marshall Project roundup of some of the terms in U.S. criminal law being batted around this week.

Treason is unique: It is the only crime defined by the U.S. Constitution rather than by the laws that Congress has passed in the centuries since. The Founders intentionally described it narrowly, so that any repressive future president could not use it to punish political opponents. There are only two ways to commit this offense, they said: “levying war” against America or “giving aid and comfort” to one of the nation’s enemies—typically a foreign adversary.

Over the years, the Supreme Court and Congress have further narrowed the scope of what constitutes treason: To be guilty, you must have the specific intent to betray the U.S. on behalf of an enemy and then commit an overt act of such betrayal. Given the prevalence of American flags on the Mall this week and the rioters’ chants of “U.S.A.! U.S.A.!”—however malicious their deeds—it would be nearly impossible for prosecutors to prove their goal was treasonous.

Treason charges have only been brought by federal prosecutors roughly 30 times in U.S. history, including against several Nazi sympathizers during World War II. Most recently, an Oregon man who changed his name from Adam Pearlman to Adam Yahiye Gadahn and became a spokesman and media consultant for Al Qaeda was indicted for treason in 2006. He had moved to Pakistan and was killed there by an American drone strike in 2015.

On Wednesday, President-elect Joe Biden said that some of what unfolded at the Capitol “borders on sedition.”

This term has a long, complex history; wartime legislation passed in the late 1700s and early 1800s used the concept to criminalize any criticism of the government’s actions, leading to thousands of prosecutions, sometimes just for writing a pamphlet. These laws were unpopular, especially when they were used to target people who posed no physical threat, and they were eventually repealed or struck down.

Today, the U.S. criminal code defines sedition as part of a broad category that includes treason. The actual crime is called “seditious conspiracy.” This involves using—or planning to use—physical force against the U.S. government, as well as efforts to “seize, take, or possess” government property, or “delay the execution of any law of the United States” by force. The punishment can be up to 20 years in prison.

This law has been used in recent years to prosecute right-wing militia members like the Hutaree, a Michigan-based group that sought to kill police before they were arrested by the FBI in 2010.

Matthew Schneider, U.S. Attorney for the Eastern District of Michigan, has already told the Detroit Free Press that more “seditious conspiracy” charges may result from the Capitol takeover, and legal experts told the newspaper that interrupting the counting of electoral votes clearly violated the ban on delaying the execution of U.S. law. Other federal prosecutors around the country have made similar statements.

Insurrection also falls under the same suite of federal laws as sedition, and the two can be difficult to distinguish. But it is charged by federal prosecutors far more rarely—almost never in American history. It means, essentially, to incite, assist in or engage in a full-on rebellion against the government: a step beyond just conspiring against it, and requiring that significant violence be involved.

Cliven Bundy, a Nevada rancher, mounted an armed standoff with the federal government in 2014—his son, Ammon Bundy, did the same in Oregon in 2016—on the basis of an explicitly anti-U.S. government philosophy. Still, prosecutors did not charge them with insurrection, which legal experts say is nearly impossible to prove in court.

A riot is a protest that turns violent, which clearly happened this week. The criminal charge of rioting, though, is often pursued under state law.

Federal prosecution can result if a person traveled from another state to be part of a riot, or used interstate communications (internet, phone, etc.) to plan it. A riot that takes place on U.S. property, which includes the Mall and the Capitol building, is also subject to federal jurisdiction.

The Trump administration has repeatedly charged Black Lives Matter protesters and others expressing dissent in the streets with “rioting.” Whether Trump supporters who rioted on federal property, after crossing state lines in cars and buses, will be prosecuted in the same way will test whether the law is being enforced equitably, regardless of race or ideology.

President Trump has faced accusations of “inciting” violence at least since his first presidential campaign in 2016, when he obliquely suggested that people with guns use them to attack his opponent, Hillary Clinton. This week, he was accused again, based on his urging an angry crowd to march toward Congress and “fight.” His lawyer, Rudy Giuliani, also encouraged “trial by combat” at the rally.

At the same time, Trump’s statements to crowds have often been interpreted as legal, because the First Amendment’s guarantee of free speech sets a very high bar for what words can be criminalized.

In 1969, Ku Klux Klan leader Clarence Brandenburg made a speech at an Ohio rally. “If our President, our Congress, our Supreme Court, continues to suppress the white, Caucasian race, it's possible that there might have to be some revengeance taken,” he said. Brandenburg was fined and sentenced to prison under Ohio state laws. But the U.S. Supreme Court overturned his conviction, saying that such speech couldn’t be punished unless it “is directed to inciting or producing imminent lawless action and is likely to incite or produce such action.”

The “Brandenburg test”—also known as the “incitement test”—has been used repeatedly to protect speakers across the political spectrum who stop short of offering what one ACLU lawyer has described as an “immediate roadmap for violence.”

Many commentators—from Rep. Rosa DeLauro, Democrat of Connecticut, to the writer Rebecca Solnit—have called the events at the Capitol a “coup attempt.” The word “coup” is not in any federal laws defining American crimes, but could be seen as a synonym for overthrowing the government, a crime covered by the laws against insurrection and “seditious activity.”

But “attempt” does appear frequently in the law. Frequently, when Congress decides to make an action illegal, it’s also illegal to attempt that action. According to the Congressional Research Service, an attempt is generally understood to mean a “substantial step” toward the crime, beyond just “mere preparation.”

If those terms confuse you, you’re not alone: Federal judges have called this distinction a “thorny task” with “no definite line.” In 1988, one judge wrote that a man named Gary Savaiano may not have attempted to make methamphetamine when he acquired a recipe for parts of the drug; he crossed the line into an “attempt” when he actually bought the chemicals and found a chemist to instruct him.

Some legal scholars have argued that a more harmful action—overthrowing the government, say—should have a lower bar for what is considered a first step as part of an attempt.

“Conspiracy” is a federal crime that could be applied to many of the above criminal charges. It means planning with others to commit “any offense against the United States”—whether that offense ultimately takes place or not. For example, you could be charged for conspiring to rob a bank with someone, even if you never successfully pull it off.

The punishment for general conspiracy is up to five years in federal prison. “Seditious conspiracy,” again, can mean 20 years.

Conspiracy laws are fairly malleable, and have been used by federal prosecutors to bring down a wide swath of people for the same plot. For instance, they have been used to hold large groups of young men of color responsible for one gang’s crimes, despite varying levels of involvement.

Unlike “aiding and abetting” laws, which criminalize helping someone else commit a crime, this offense doesn’t actually need to occur for the government to charge someone. That means that prosecutors could seek to charge rioters who planned together to commit more serious violence or destruction in advance of Wednesday’s events, using social media or other online posts as evidence.