Feds spent millions to restart the death penalty and in the process revealed much about how they do it. 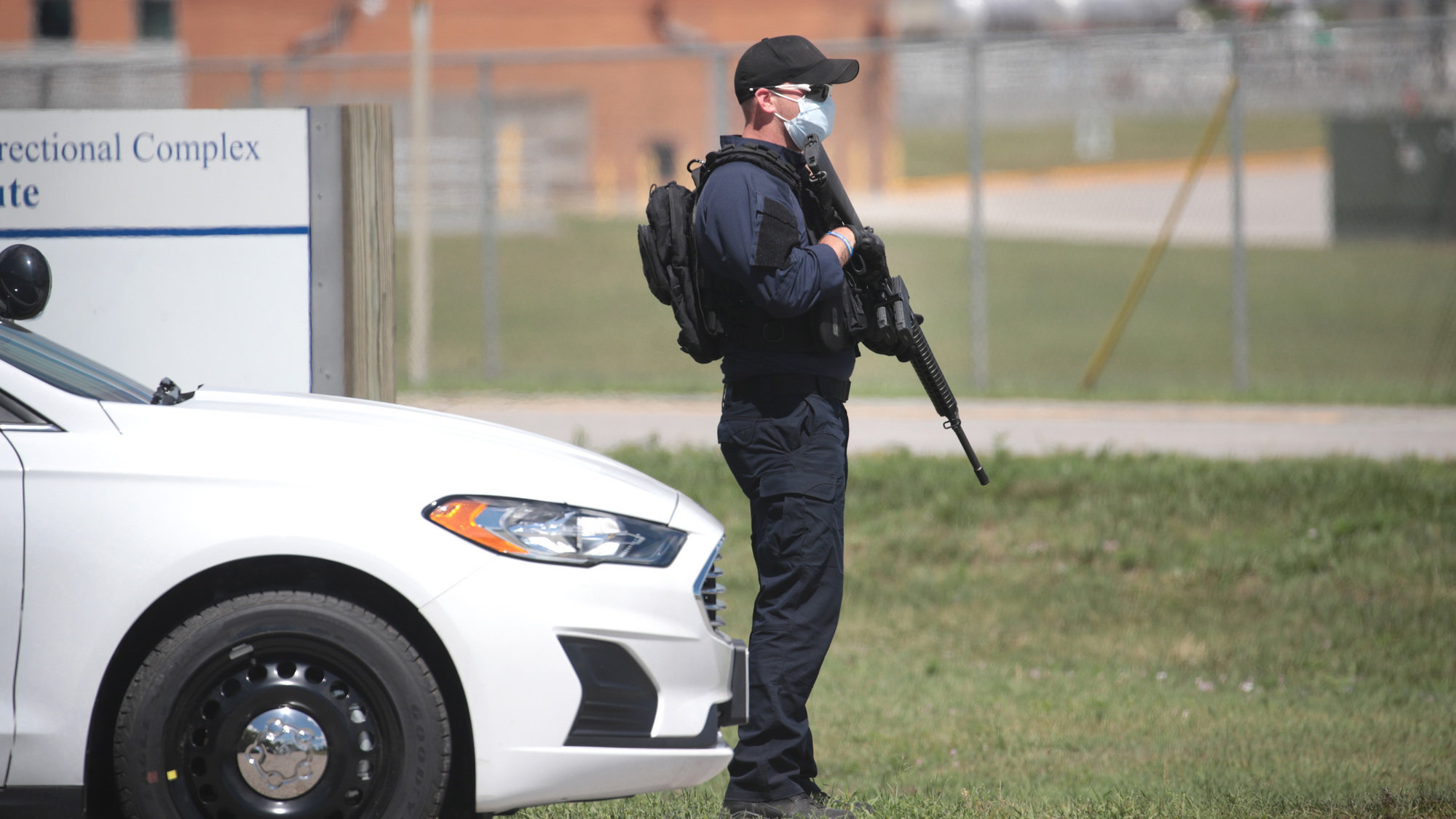 An officer outside the the Federal Correctional Complex in Terre Haute, Indiana, where the federal government was preparing to execute Daniel Lewis Lee in July 2020. Scott Olson/Getty Images
By Keri Blakinger and Maurice Chammah
The death penalty is in flux. These are the stories that you need to know about capital punishment's past, as well as its uncertain future.

When Scott Mueller drove to Indiana in July to see Daniel Lewis Lee die, he stayed at a Holiday Inn. The hotel was nice enough, and only a 10-minute drive from the federal execution chamber in Terre Haute where the man who killed Mueller’s father would take his last breath.

The two-night hotel stay cost around $200, and the tab was picked up by the Federal Bureau of Prisons. It amounted to a small fraction of the more than $107,000 the agency spent on hotels for the witnesses and staff who flocked to western Indiana last summer for the federal government’s first executions in nearly two decades. A review of the expenses for five executions in July and August—including at least $9,376 for plane tickets and rental vans, more than $25,000 for kosher food and roughly $6,590 for tents—paints a stark and intimate picture of the practicalities of death, shedding light on a secretive process typically hidden from the public and shielded under law.

Records providing details of the spending, which the American Civil Liberties Union estimates totaled nearly $4.7 million over two months, were released under the federal Freedom of Information Act.

“The government is doing so much of this in the dark, so we don’t always get to see the full weight of what it’s up to,” said Cassy Stubbs, director of the ACLU’s Capital Punishment Project. “They’re willing to go to extraordinary lengths in terms of spending our money and then hiding the footprints of it.”

President Donald Trump has overseen more federal executions than any president in decades, and his Justice Department has asked courts to overturn a decision so it can put two more men to death this week before he leaves office. Congressional Democrats have unveiled legislation this year to abolish the federal death penalty, a goal President-elect Joe Biden says he supports. The high cost of capital punishment—from trials to appeals to executions—has been a constant feature of debates about the punishment and could come up if Congress takes on the issue.

The spending records from July and August offer glimpses of not only the cost but the logistics of how the government puts prisoners to death. Days before each cluster of executions last summer, the Bureau of Prisons shipped in dozens of extra staff for training in preparation for “the event,” as it is elliptically referred to in records. It’s unclear what that training involved, but records show it cost thousands of dollars. On top of that, the staff hotel rooms cost at least $35,000—a number that is likely far short of the total, since many of the hotel-related line items in the spending records don’t specify whose bills they covered. It’s also not clear how many prison workers flew to Indiana or how many nights they stayed, but Mueller said at least a few guards were at the Holiday Inn with him and other witnesses in July.

“Anytime we needed anything, we were supposed to ask them,” he said. “They took us anywhere we needed to go.”

The guards told him they’d come in from out-of-state, he said, and records show the bureau spent roughly $3.1 million on unidentified costs associated with the staff it brought in from more than two dozen prisons across the country. The Bureau of Prisons refused to comment on the payment records or to answer questions about the operations outlined in the documents.

Mueller uses a wheelchair, which he said can complicate the logistics of plane travel, so he decided to drive to Indiana from his home in Arkansas. Once he checked into the Holiday Inn, guards took him to restaurants in a special “handicap rental van” that cost $543.40. Other van rentals for shuttling around staff and witnesses totaled at least $4,500 over the five executions, while a bus rental cost $6,330. Since many of the other witnesses didn’t live close enough to drive, they flew in, and the bureau spent more than $4,310 on plane tickets for July and August.

The day of Lee’s execution, Mueller and the other witnesses arrived at the prison in the afternoon. Because of legal delays, they ended up spending more than 12 hours there. The government paid for snacks, drinks and pizza. The agency also fed the guards and some of the other law enforcement agencies that came to help with outside security, racking up a tab of more than $3,990 for snacks and “light refreshments.”

Outside the facility, protesters held press conferences, waved signs and live-tweeted every court development. The folding table to register them cost $47.98 at Lowes. The SD memory cards to record videos of their activities cost $58.78. The portable restrooms cost $1,605.

Inside, 2,600 prisoners in the two-prison complex were locked down. Some were shut in their cells and others were forced to spend the night in the gym, where they couldn’t see the witnesses or the condemned man entering the death chamber. During that first execution and those that followed, the prisoners ate sack lunches and box meals after the mess hall closed for the lockdown. The prison food during executions cost more than $77,000 over the course of the summer. On top of that, the bureau spent $6,594 on bottled water, $6,480 on single-serving bags of potato chips and $12,998 on disposable trays and baggies to deliver it all.

While the rest of the prison put everything on hold, officials prepped Lee—sentenced to death for killing Mueller’s father, his wife and her daughter—for the lethal injection, using some specially purchased medical supplies. There was the electrocardiogram machine ($1,459) and EKG tape ($81.24), a suture kit ($470.88), a heating pad ($18.46), assorted medical supplies ($374.67) and an ultrasound rental ($2,000), likely to help find a vein if the usual arm veins proved difficult.

“With the central veins you can’t see or feel them, so you have to know the anatomy or use an ultrasound,” said Dr. Joel Zivot, a lethal injection expert and intensive care doctor at Emory University who did not attend the execution but reviewed the documents later. “The EKG would probably be to tell when he’s died. It’s weirdly laughable. Like, you need that? Just go in and check him.”

It’s not clear how much the agency paid for lethal drugs themselves, a few grams of pentobarbital, and it’s not clear what’s buried in the redacted expenditures marked “confidential.”

The agency refused to answer any questions about the money, procedures or details of what happened. For Stubbs and the ACLU, the bureau’s lack of forthrightness suggests there are still more costs it hasn’t revealed. “We have real reasons to question whether or not this number now is complete either,” Stubbs said. There are some small expenses that appear to be absent, such as last meals for three of the prisoners. (The records list only $33.11 for Dustin Lee Honken’s dinner from Pizza Hut, and $0 spent when Keith Dwayne Nelson refused a meal.) And there are some potentially larger expenses, like whatever might be included in the 28 pages of records officials admitted to withholding.

Even as it paid for tents and memory cards and planes and pizza, the agency’s largesse did not extend to the families of the condemned, who had to pay for their own travel and accommodations. “What they pay for on our side is the shipping of the body of our loved ones, the embalming, a suit for them to wear and the casket,” said Lisa Brown, whose son Christopher Vialva was executed in September for killing two youth ministers. None of those sorts of funeral expenses are noted in records for the July and August executions provided to the ACLU.

Brown said that in order to visit her son and witness his execution, she took out a loan. Then she learned that her Jewish congregation and her son’s friends had pooled donations to pay for her gas and hotel room. “I am so blessed that people had compassion to do that,” she said. The government’s approach still stung months later: “We feel that they go out of their way to not accommodate us.”