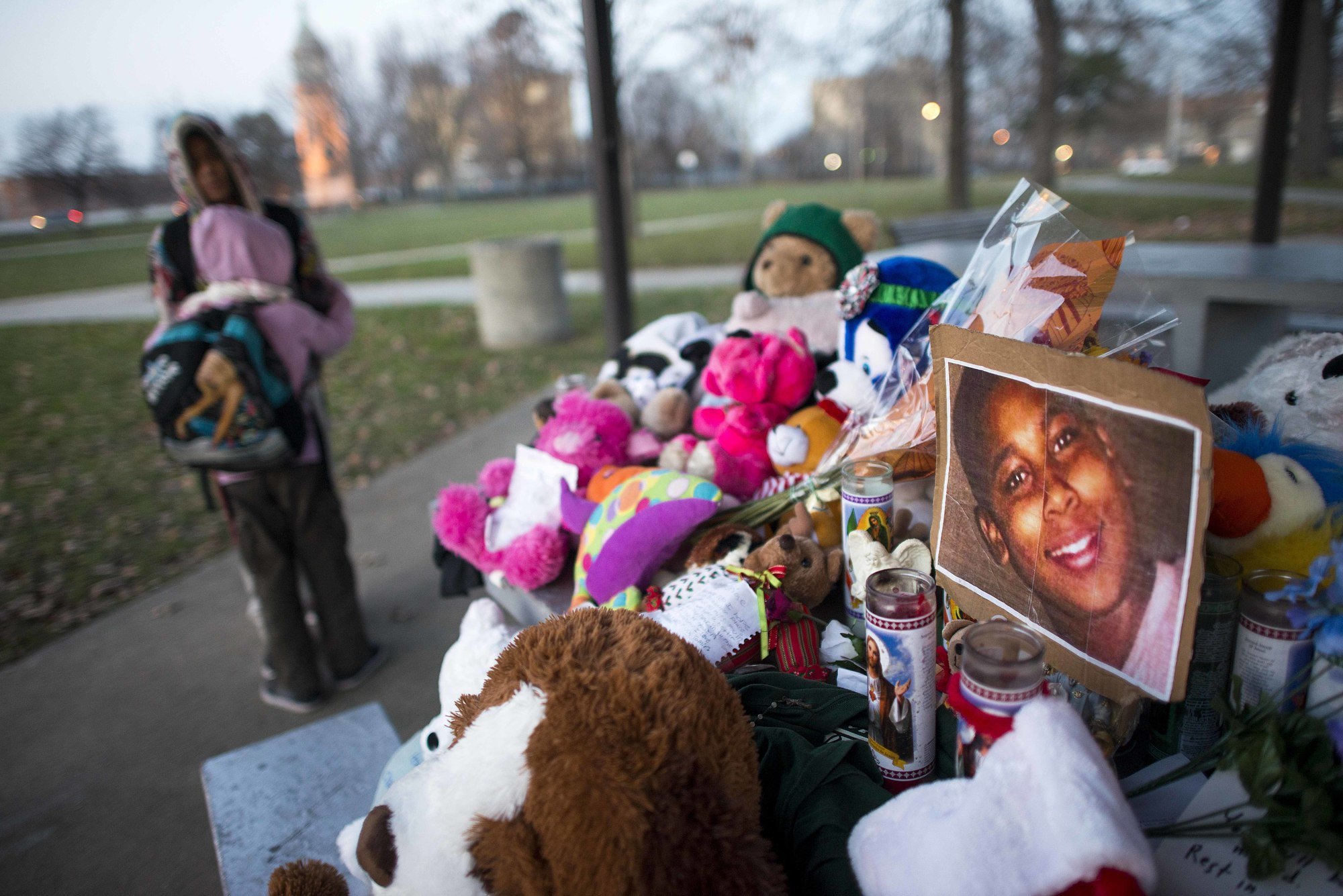 A memorial site dedicated to Tamir Rice at Cudell Commons Park, where a police officer fatally shot the 12-year-old boy in 2014. Ty Wright
By Abbie VanSickle and Jamiles Lartey

More than six years after Cleveland police fatally shot 12-year-old Tamir Rice as he played with a toy gun in a park, sparking national outrage and calls for change, the city is poised to introduce a policy aimed at reshaping how officers interact with children.

The nine-page document, which requires that officers consider factors like the perceived age, physical build and emotional state of anyone under 18 before using force, will be rolled out in the coming months after police develop a training curriculum, police officials said.

Cleveland is the exception; most police departments do not offer clear guidelines about the use of force on youth, experts said. The change comes as police nationwide continue to face scrutiny following George Floyd’s death in Minneapolis last May. A video showing police in Rochester, New York, handcuffing and pepper-spraying a 9-year-old girl as she cried out for her father prompted wide outrage when it was released last month. 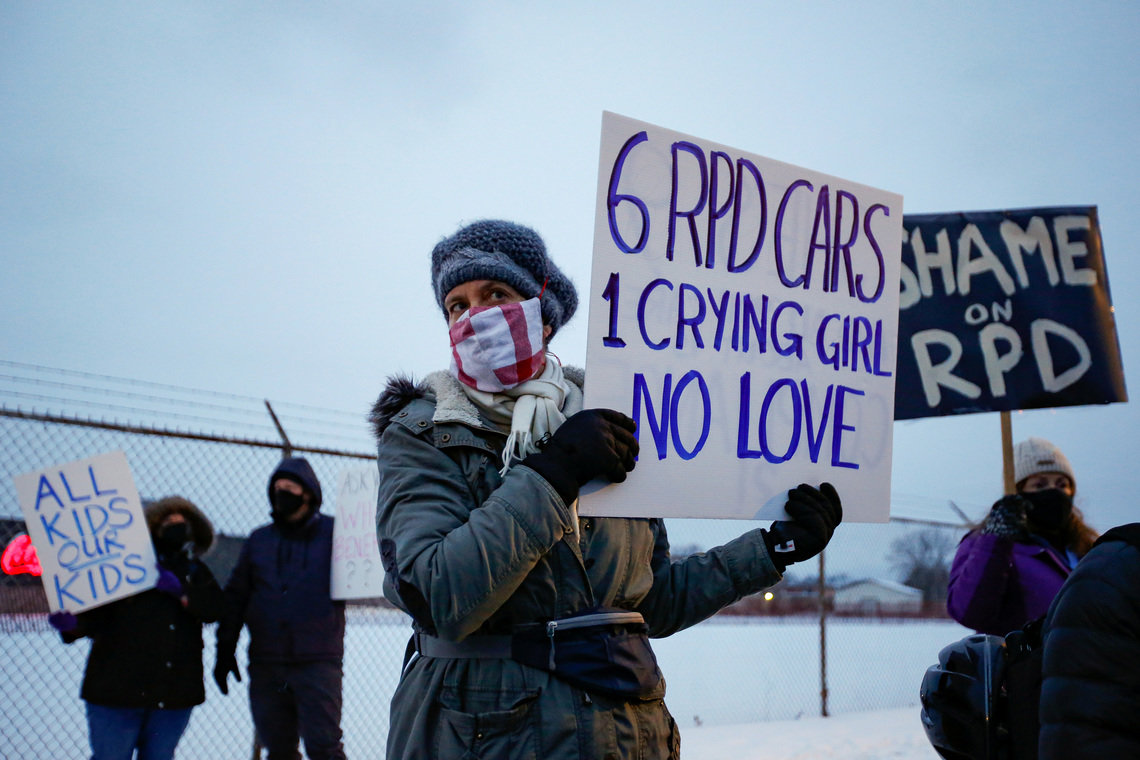 In February, people protested an incident where police handcuffed and pepper-sprayed a nine-year-old girl in Rochester, N.Y.

The years it took for Cleveland to adopt the policy — even after an infamous case like Rice’s — illustrate how difficult it can be to change policing. Some critics of the police department also said the new policy doesn’t go far enough, in part because it doesn’t ban using weapons like stun guns on children.

But Lisa Thurau, a Boston-based expert who trains police on how to deal with children, said Cleveland’s policy is a step in the right direction for what she sees as a national crisis. Her organization, Strategies for Youth, tracks lawsuits and media reports of police use of force with children nationwide. It documented a rising number of cases involving younger children from 2000 to 2018 and an increase in lawsuits alleging the use of force by officers assigned to patrol schools.

“You have a set of policies by which supervisors can hold officers accountable,” Thurau said of Cleveland’s new measures. “All of that is a huge step forward in the snail’s pace of progress.”

Few police departments prescribe in detail how officers may use force on minors. Some, like Los Angeles and Chicago, specifically mention age as a factor for officers to consider. Others discourage or prohibit the use of “intermediate” levels of force, like dog bites, pepper spray and especially stun guns on children. Police in Washington, D.C., face limitations on handcuffing children under 12 after public outrage over two high-profile incidents in 2019 captured on video. Existing youth-oriented policies do not address how and when officers should use their guns, which are governed by separate standards than less lethal methods.

But policing experts say most departments apply the same rules of force against children as they do for adults. The constitutional guardrails, set out by the Supreme Court, restrict force based on what police describe as “officer-subject” factors, such as size and strength, said Ashley Heiberger, a professor of policing at Moravian College and a former police captain in Pennsylvania.

“Everything else being roughly equal, I should probably have to use less force,” he said, with “a person who is smaller, weaker, etc.”

Cleveland Police Chief Calvin Williams said in an interview this week that some in the department had begun thinking about policing young people differently a few years before Rice’s death. But he said a plan to reevaluate the city’s policies and prepare officers for dealing with youths was “put on the back burner” after the U.S. Department of Justice launched an investigation in March 2013 into the use of force by Cleveland police. The probe came after high-profile cases involving mostly adults, including a 2011 video showing officers kicking an unarmed man in the head as he lay face down on the ground, and a 2012 high-speed chase that led to the fatal shooting of two unarmed people.

The federal investigation did not focus on how police treated children, but public outrage erupted in November 2014 after Rice’s shooting, just as the inquiry was wrapping up.

Rice was playing with a toy pellet gun near a youth center in the Cudell neighborhood. Someone called 911, telling the dispatcher that the person in the park was “probably a juvenile” and the gun was “probably fake.” But those details weren’t passed on to the two officers who responded, investigators later found. The officers arrived quickly, and, within seconds, Officer Timothy Loehmann opened fire, killing Rice. The other officer did not fire his gun. A grand jury declined to bring criminal charges against the officers; so did federal prosecutors, who concluded there was not enough evidence to prove the officers’ actions were unreasonable.

Still, the tragedy brought the department’s need for youth policies to the forefront, Williams said.

“Of course the death of Tamir Rice back in 2014 played a role in us talking about our youth policy,” he said.

Over the next two years, Thurau and others — from activist groups to emergency room pediatricians and representatives from Cleveland schools — worked to create a five-part policy to rethink the department’s encounters with kids, including if and when to use force. They wanted to ban stun guns, chokeholds, batons and dogs.

But the final policy stops short of banning or restricting certain weapons, like stun guns or pepper spray on youth, as some other departments do. Cleveland only requires, in a separate policy, that if pepper spray is used on juveniles, they be transported to the nearest hospital for treatment.

The new policy does mandate that officers consider age-related factors, like physical build, perceived age and emotional state. It also requires police to use age-appropriate language, including not cursing or using derogatory words to refer to young people. The policy says that minors fleeing police or verbally challenging officers cannot alone constitute probable cause for searching or detaining them. It gives specific guidelines for interrogating and arresting anyone under 18.

Williams said he didn’t recall specific conversations about banning stun guns and other weapons for children of certain ages.

Samaria Rice, Tamir’s mother, called it “weak,” saying it would take much more to change policing. She said she hoped departments in Cleveland and other cities would increase the educational requirements for officers, mandating they take classes in sociology and psychology.

Mainly, though, she said she wants officers to have a deep understanding of the community they police and to treat all children as if they were their own.

Charmin Leon, who spent 13 years as a Cleveland police officer before joining the Center for Policing Equity, a Los Angeles-based think tank, said a new policy is not enough if police can’t find, hire and retain the right people.

“Do we need good policies? Absolutely, but at the end of the day you have to have people who care enough to follow those policies,” said Leon, who also serves on Cleveland’s Community Police Commission, a group of local leaders and police who provide community input for policing changes.

Others in Cleveland pointed to the department’s past performance as reason for skepticism. “I don't have faith at all with regards to this youth policy that they've come up with,” said Kareem Henton, a local Black Lives Matter organizer. “We've been up under this consent decree for years now, and they still are not properly trained,” he said, referring to the court-mandated agreement that followed the Department of Justice’s investigation. He said the new youth policy was good but that “it's also vague enough for ways around it.”

Kayla Griffin, assistant secretary of the Cleveland NAACP, who was involved in drafting the policy, calls the skepticism valid. She, like Hinton, sees police violence intertwined with systemic racism, a view many voiced after George Floyd’s killing. But she said the goal of the new youth policy was “to put as many protections in place as possible until something turns and there will be a drastic reimagination of how we do policing in our communities.”