Death Penalty for Mass Shooters? Depends On Where They Strike.

The men arrested in recent killings in Atlanta, Boulder, Colorado, and Orange, California, could face very different sentences if convicted.

By Maurice Chammah and Keri Blakinger
The death penalty is in flux. These are the stories that you need to know about capital punishment's past, as well as its uncertain future.

Both Robert Aaron Long and Ahmad Al Aliwi Alissa were arrested last month for allegedly carrying out high-profile shooting sprees that killed a large number of people. Both crimes have revived our national debates about guns.

But only one of the men has a realistic chance of ending up on death row.

Colorado, where Alissa will face trial, is one of 23 states that have abolished the death penalty. Georgia, where Long was arrested, is one of 27 that still have the punishment on the books. It’s also among a smaller subset of 15 states that have actually executed someone in the last decade, according to the Death Penalty Information Center.

This article was published in partnership with Daily Beast.

And then there is California, where Aminadab Gaxiola Gonzalez was arrested last week, suspected of killing four people, including a child. The death penalty there is more symbol than reality: California Gov. Gavin Newsom has ordered a moratorium on executions, which have not been carried out in the state since 2006. But local prosecutors frequently send people to death row for what amounts to a virtual life sentence. Orange County District Attorney Todd Spitzer has already told reporters he’ll consider seeking capital punishment for Gonzalez.

State laws are only part of the picture, because depending on the investigations, the Department of Justice may be able to swoop in and seek death sentences for federal crimes. The fates of these men will be dictated by decision-makers ranging from local district attorneys all the way up to U.S. Attorney General Merrick Garland, and serve as the latest examples of the strange geographic disparities of American capital punishment.

The death penalty is disappearing: although Georgia still executes people, the entire state has only sent a single person to death row since 2015. Across the country, it’s now clear that whether you get the death penalty has less to do with what you did than where you did it. In 2013, the Death Penalty Information Center reported that all of the state death row prisoners across the country had come from just 20% of counties, and a majority of executions had been produced by just 2% of counties.

Why these counties? Some are populous, meaning there are more murders that could qualify for death sentences and larger tax bases that can handle the high cost of capital trials. Last year, a group of scholars led by Frank Baumgartner at the University of North Carolina-Chapel Hill compiled a database of more than 8,500 death sentences handed out across the country since 1972. They found that counties where lynchings were carried out during the Jim Crow era in the early 20th century were also more likely to sentence people to death today. The findings are in line with other studies showing racial disparities on death row, as well as the higher likelihood of a death sentence when the victim is White.

But perhaps the most important factor, in any individual case, is also the simplest: Who is the prosecutor? 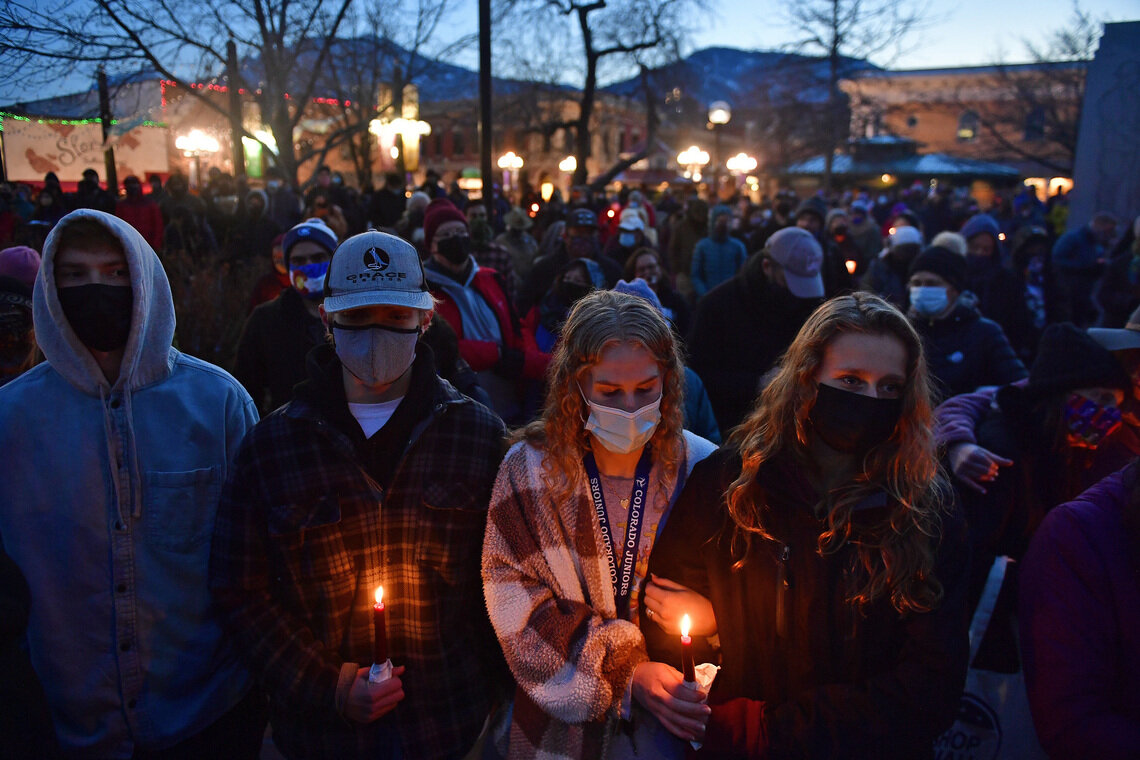 A candlelight vigil honored the 10 victims of the mass shooting at the King Soopers grocery store in Boulder, Colo., on March 24, 2021.

Even if Colorado had not abolished the death penalty last year, Alissa would have almost certainly avoided that fate. Though he’s accused of killing 10 people in a Boulder grocery store on March 22, voters and elected officials in the liberal Colorado county where he was arrested have long opposed capital punishment. The current district attorney has even urged President Joe Biden to end it at the federal level.

Long faces charges in two different Georgia counties. He allegedly killed four people in Fulton County, which includes a large urban swath of Atlanta and where last year all three candidates for district attorney promised never to seek the death penalty. There has been a political shift away from the death penalty in many large, urban counties, including Philadelphia and Los Angeles.

“What you see is a big consensus among prosecutors that the death penalty is either immoral or not worth the funds or that it provides a limited benefit to public safety,” said Amanda Marzullo, a Texas-based defense lawyer and death penalty policy expert. “There’s really only about 25 counties nationwide where the death penalty is sought on a regular basis.”

Long also allegedly killed four people and wounded a fifth in Cherokee County, which has never sent someone to death row. The county has a Republican district attorney, Shannon Wallace, who pledged in a press release to prosecute the killings “to the fullest extent of the law.” It’s not yet clear whether Long’s case qualifies for a death sentence. A spokesperson for Wallace wouldn’t rule out the possibility and stressed that the crimes are still under investigation.

Much about the case — whether more charges are coming, whether the victims’ families will publicly come down one way or the other — is still unknown and local observers are predicting a “tug of war” between prosecutors over jurisdiction.

“Prosecutors only seek death in a small fraction of cases,” said Anna Arceneaux, executive director of the Georgia Resource Center, which defends people on the state’s death row. “This results in geographic disparities not only across states, but also across judicial circuits within Georgia itself.” She said prosecutors must also consider Long’s mental health and background, as well as whether the expense of a death penalty trial could be used instead to “prevent further violence against Asian-Americans."

Wallace’s office does not have a long record of getting death sentences. Scholars have found that the best predictor of whether a county will seek death is whether it has done so before. “Once a county goes down the path of sentencing to death, it gets better at it,” said Baumgartner. Prosecutors use past decisions as comparisons; if the county has sent many people to death row, the bar may seem lower.

This is likely the case in Orange County, California, which has sent more than 80 people to death row since the 1970s, according to Baumgartner's data. The county has been responsible for two of the state’s 13 executions in the last half-century, and District Attorney Todd Spitzer has campaigned against the state’s moratorium on executions.

In a landmark 2015 death penalty case from Oklahoma, U.S. Supreme Court Justice Stephen Breyer wrote in his dissent that capital punishment today may violate the Constitution because it is “imposed arbitrarily” from place to place. He cited research suggesting that death sentences could be explained by whether defense lawyers were adequately funded or whether judges faced political pressures. One scholar uses the phrase “local muscle memory” to describe how various factors inform one another, creating feedback loops.

Justice Antonin Scalia disparaged the works Breyer cited as “abolitionist studies.” But former Texas prosecutor Lynn Hardaway pointed out that geographic disparities can also be a problem when considering justice for victims, who don’t “have the luxury of deciding” where they get killed.

Some prosecutors are fine with the disparities. “Prosecution is, and should be, a local issue,” said Johnny Holmes, the former district attorney of Harris County, Texas, noting that the 10th Amendment to the Constitution delegates power to the states. “That’s why I wouldn’t go on national television about the issue. It is nobody’s issue but Texans’.”

Holmes’s own office was famous for its culture of seeking death in the 1980s and 1990s, as Houston became the “capital of capital punishment.” Holmes handed out syringe-shaped pens, and his prosecutors who won death sentences joined an informal “Silver Needle Society”.

"You will get disparate sentences in similar cases between jurisdictions,” said Shannon Edmonds, staff attorney with the Texas District and County Attorneys Association. “But if each of those local communities thinks those sentences are a just outcome, then it’s accomplishing justice at the micro level, even if at the macro level there are disparities.”

In theory, some of the geographic disparities could be alleviated by the Department of Justice, which can prosecute a death penalty case in any state for federal crimes. Instead of making the punishment more equitable, though, one study showed there are geographic and racial disparities in who receives federal death sentences, too.

It’s too early to say whether federal prosecutors will try to define any of the shootings as a federal crime, but there are plenty of precedents: After the Boston Marathon bombing, they sought death for Dzhokhar Tsarnaev, even though Massachusetts does not have the death penalty. Then they sought death for Dylann Roof, for killing multiple churchgoers in South Carolina, even though he could have faced the same punishment in a state court.

Those cases happened under President Barack Obama, even as he expressed misgivings about the ultimate punishment. We still don’t know much about the Biden administration’s approach to the subject, though he pledged on the campaign trail to work to end the practice. More mass shootings are sure to test that promise.