They Are Terminally Ill. States Want To Execute Them Anyway.

“I don’t understand trying to kill somebody who is already dying,” says the sister of Idaho death-row prisoner Gerald Pizzuto. 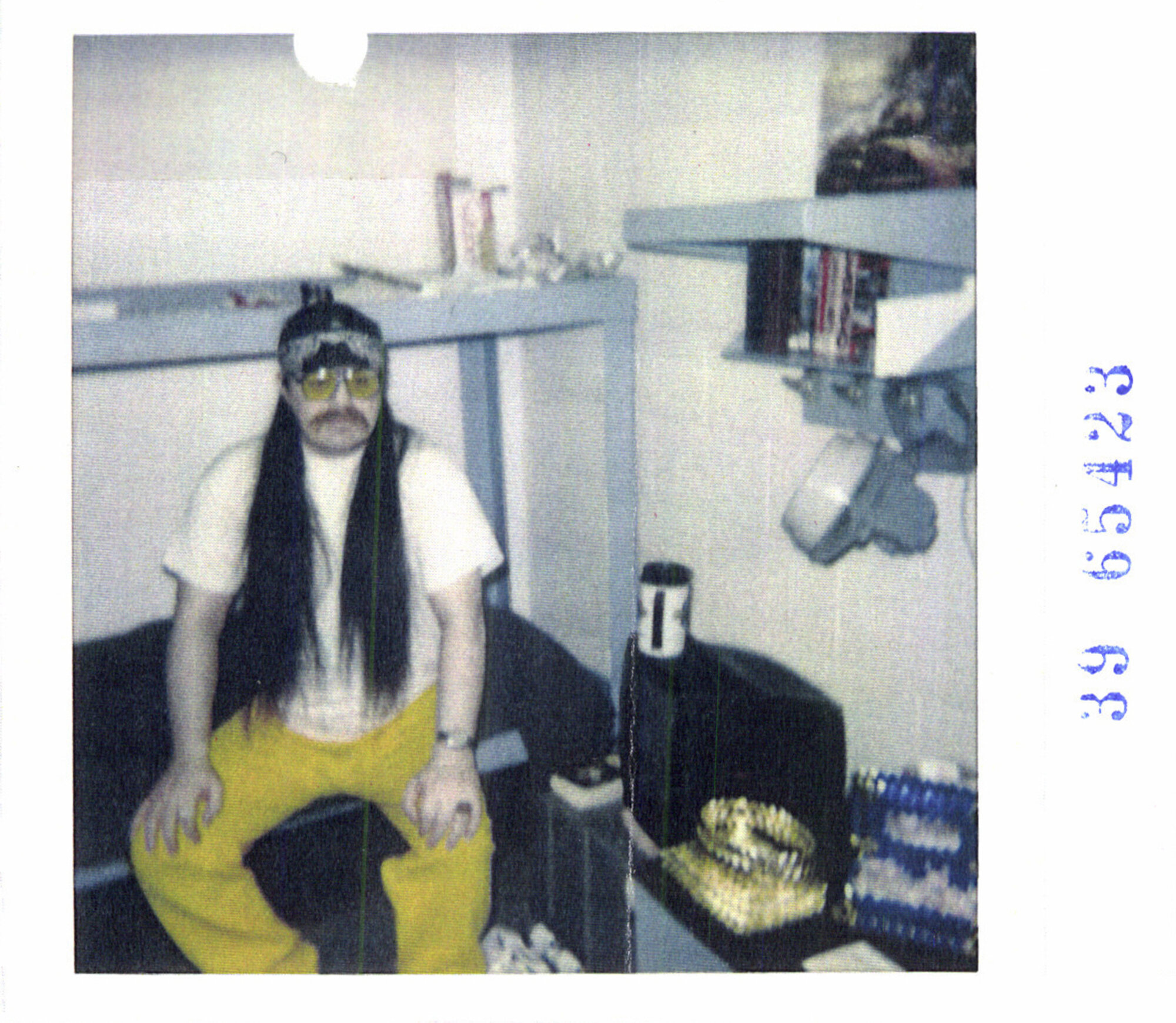 Gerald Pizzuto is near death, but it’s unclear whether the cancer or the state of Idaho will get to him first.

For more than a year, the 65-year-old has been in hospice care on Idaho’s death row, suffering from advanced bladder tumors, along with Type 2 diabetes, and a variety of heart and lung diseases. According to his defense team, he’s been prescribed 42 different drugs in the last year, and his medical records say he has “begun experiencing memory loss and mild disorientation associated with the death process.”

But on Thursday, the Idaho attorney general’s office confirmed the state’s plan to execute him on June 2, for the 1985 murders of two gold prospectors in the mountains north of Boise. If it goes through as planned, this will be Idaho’s first execution in nine years.

Given the likelihood that Pizzuto will soon die of natural causes, his case may stir up the recurring debates about the cost of capital punishment in this fiscally conservative state. His legal team has filed a petition for clemency, calling the execution “an unnecessary exercise, with significant operational and personnel costs for the State.”

“I don’t understand trying to kill somebody who is already dying,” said his sister Angelinna Pizzuto.

Across the country, executions are growing less frequent each year. But many of those facing execution are terminally ill, or simply very old. While courts try to ensure that innocent people aren’t executed and guilty people don’t face violations of their constitutional rights, the appeals process has grown longer and longer. Federal data show that people executed in 1987 had spent an average of just over seven years in prison; by 2017, those executed had been on death row for an average of nearly 20 years.

“We’ve got death rows that are starting to feel like assisted living,” said Bernard Harcourt, a Columbia law professor whose own client, Doyle Hamm, was 61 and terminally ill with lymphatic cancer when Alabama tried to execute him in 2018. Hamm’s failing health rendered it impossible for prison officials to find a usable vein, even after hours of poking that left him with a punctured bladder. Two months later, the state executed 83-year-old Walter Moody, the oldest person put to death in recent times.

In Ohio, officials tried and failed to execute Alva Campbell, who was already dying of cancer. He was unable to walk, used a colostomy bag and required four breathing treatments per day. Officials called off the execution in 2017 after they could not find a vein, and Campbell later died in his cell of natural causes.

Then in June 2018, Texas executed a confessed serial killer named Danny Bible, who shook with Parkinson’s tremors as he lay on the gurney. Bible’s legal team had argued, unsuccessfully, that he was too sick for execution because his “galaxy of medical issues” would make the process more painful, violating the Eighth Amendment's ban on cruel and unusual punishment.

For more than two decades, defense lawyers for death row prisoners have argued that long prison stays under the impending threat of death amount to “cruel and unusual punishment,” and that lethal injection methods can cause excessive pain to prisoners in ill health.

The most successful of these efforts have been about dementia. The U.S. Supreme Court has ruled that people cannot be executed if they don’t understand why. In 2018 the court agreed to hear the case of Vernon Madison, who was facing execution in Alabama even though he could not remember his crime, the 1985 murder of a police officer. Alabama officials had argued that executing Madison would still fulfill the primary purposes of the death penalty — retribution and deterrence — and attorneys general in 14 other states took their side in the case.

The court stopped the execution until a lower court could revisit the case. That hearing never took place; Madison died in prison early last year.

“We may face ever more instances of state efforts to execute prisoners suffering the diseases and infirmities of old age,” Justice Stephen Breyer wrote of Madison’s case, adding that rather than “develop a constitutional jurisprudence that focuses upon the special circumstances of the aged,” the court should reevaluate the death penalty entirely.

In Idaho, Gerald Pizzuto’s lawyers may soon argue that the state’s lethal injection plan will violate his constitutional rights, by failing to account for his medical conditions and causing him excessive pain. Such arguments have reached the Supreme Court and have generally fared poorly.

But Pizzuto’s attorneys can’t make those arguments because prison officials have not yet announced what drugs they plan to use. 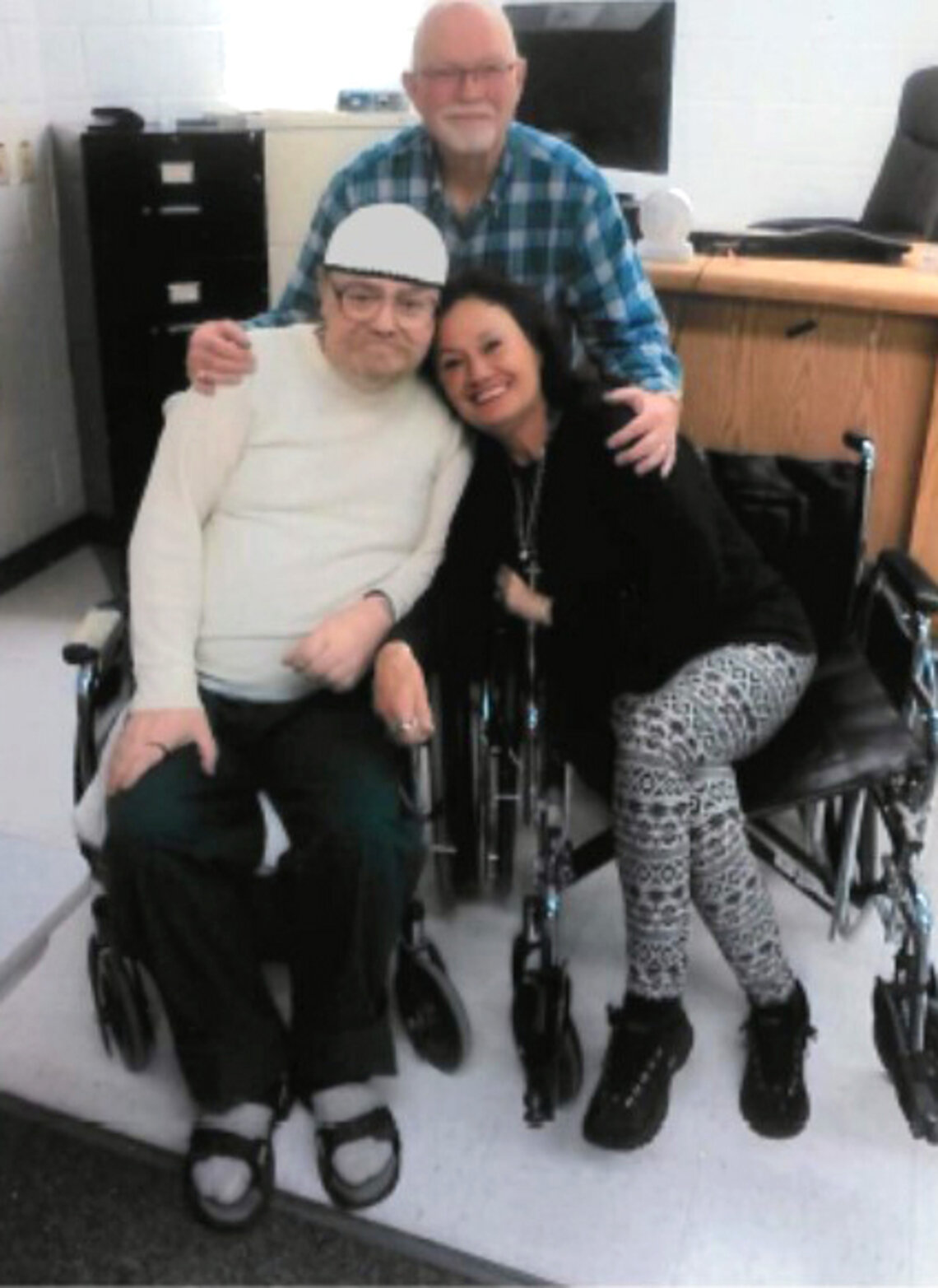 “It’s our contention that they should have to pick it, tell us what it is and we shouldn’t have to guess which of these various protocols they might choose,” said Pizzuto’s lawyer Bruce Livingston. Defense lawyers for Idaho prisoners have been arguing that the delay robs them of the ability to study the medical issues involved, but that in Pizzuto’s case, his heart problems render it “highly likely that he would experience sensations associated with a heart attack, including significant pain and a feeling of impending doom.”

Over the last decade, pharmaceutical companies have made it more difficult for prisons to use their products in executions, leading states to seek drugs from small compounding pharmacies, and even overseas. In the meantime, Idaho has been embroiled in a court battle over secrecy surrounding its lethal injection protocols, stemming from University of Idaho professor Aliza Cover’s request for information about the drugs and procedures the state used in its last two executions, in 2011 and 2012.

Prison officials have maintained that revealing too much would compromise future efforts to get drugs. But in 2020 a court ordered them to release records. Since then, officials have said they no longer have lethal injection drugs on hand, and it remains unclear how difficult it will be for them to get more.

“We are confident that when the time comes, we will have the chemicals necessary to carry out the court order,” Idaho prison spokesman Jeffrey Ray wrote in an email Thursday, adding that the agency had not yet received the death warrant for Pizzuto.

At Pizzuto’s 1986 trial, prosecutors said he was camping with friends in the mountains north of Boise when he walked to a cabin and robbed, beat, shot and buried two gold prospectors: Del Herndon, 37, and his aunt, Berta Herndon, 58.

In court records, Pizzuto’s friends — and later co-defendants — described how he said he was going “hunting.” Pizzuto emerged from the Herndon cabin with a wad of $100 bills, saying he had “put those people to sleep permanently.” The others, who took some of the money and helped bury the victims, all received prison terms.

The Herndon family has not made public statements recently, but before the trial they said they supported a death sentence. “When they murdered Berta they took my life away too,” Berta’s husband, who is also named Del Herndon, said in a report introduced at trial. "I realize nothing can help my wife, but maybe we can protect others from it happening to them."

In the years since, Pizzuto’s lawyers have argued that he suffers from an intellectual disability, which should disqualify him from execution. They also claimed prosecutors withheld details about his co-defendants, who received deals for pleading guilty and testifying against him. 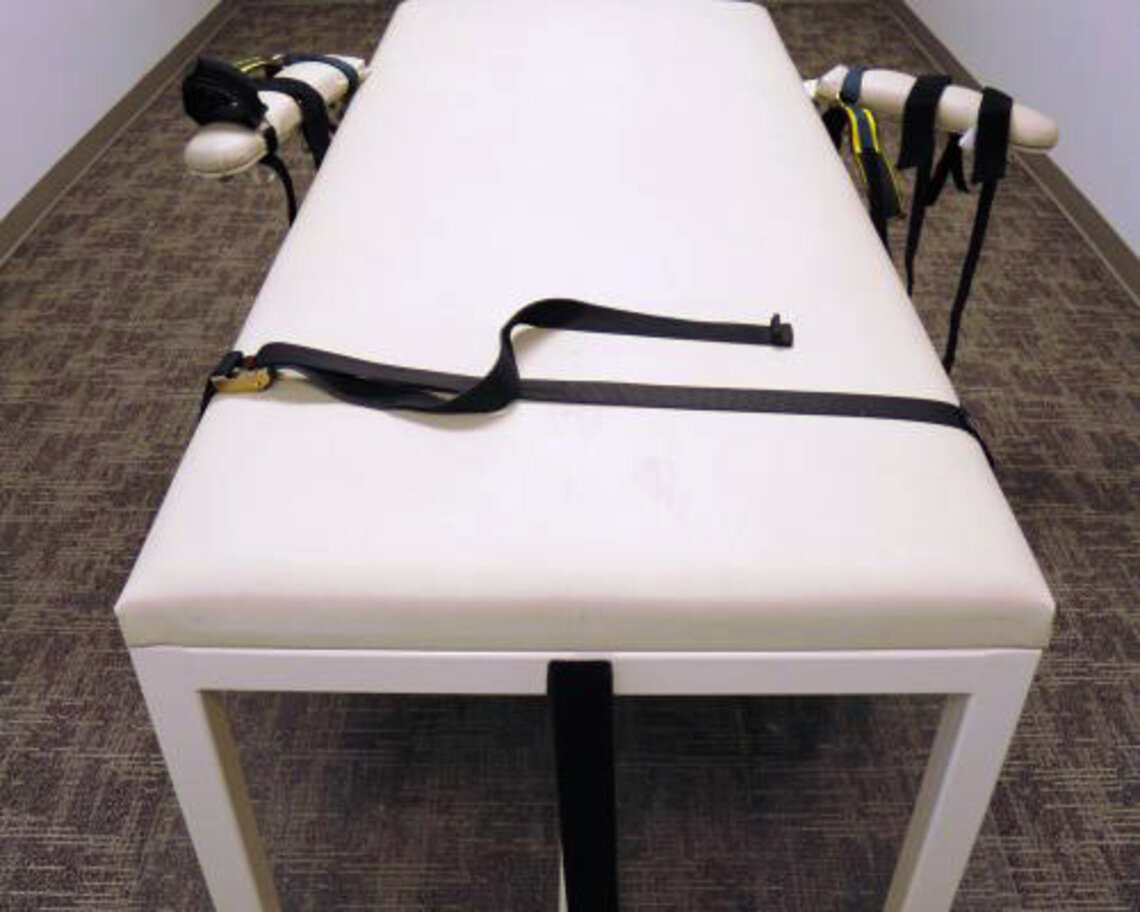 The execution table at the Idaho Maximum Security Institution, near Boise, Idaho.

As his execution approaches, Pizzuto’s team is asking the Idaho Commission of Pardons and Parole to take into consideration the trauma of his damaging childhood. According to his siblings, when Pizzuto was a child, his stepfather would frequently wake him up with a flashlight and hunting knife, take him to a garage, string him up with extension cords, rape him and charge other adult men up to $20 to rape him as well. The stepfather beat Pizzuto with a cattle prod, horse crop and 2x4, leaving him with brain damage.

“You could be asleep in your bed and be yanked out by your hair in the middle of the night and drug off,” his sister, Elsie Pizzuto, told a defense investigator.

This all began when Pizzuto was 5 or 6 years old, and his mother, according to the other children, did not protect him from the abuse. If anyone began looking into the abuse, the stepfather would uproot the family, even changing their last names to evade law enforcement.

Stories of trauma and abuse are troublingly common on death row, but the repeated sexual abuse by friends of a parent echoes the case of Lisa Montgomery, who was executed by the Trump administration despite pleas for clemency from leaders in domestic violence prevention.

Pizzuto’s sister Angelinna last saw him 18 months ago. “He’s in a wheelchair, and I’m in a wheelchair, and he could hardly stand up to hug me,” she said. At times, he’s on so much pain medication that he doesn’t recognize her or understand the severity of his medical condition. But she tries to make jokes to keep his spirits up. “It’s killing us both,” she said. “I don’t know what they’ll do when they take him. I pray God takes him first.”