A documentary examines the Philadelphia prosecutor’s efforts to bring about criminal justice reform — and the pushback he’s received along the way. 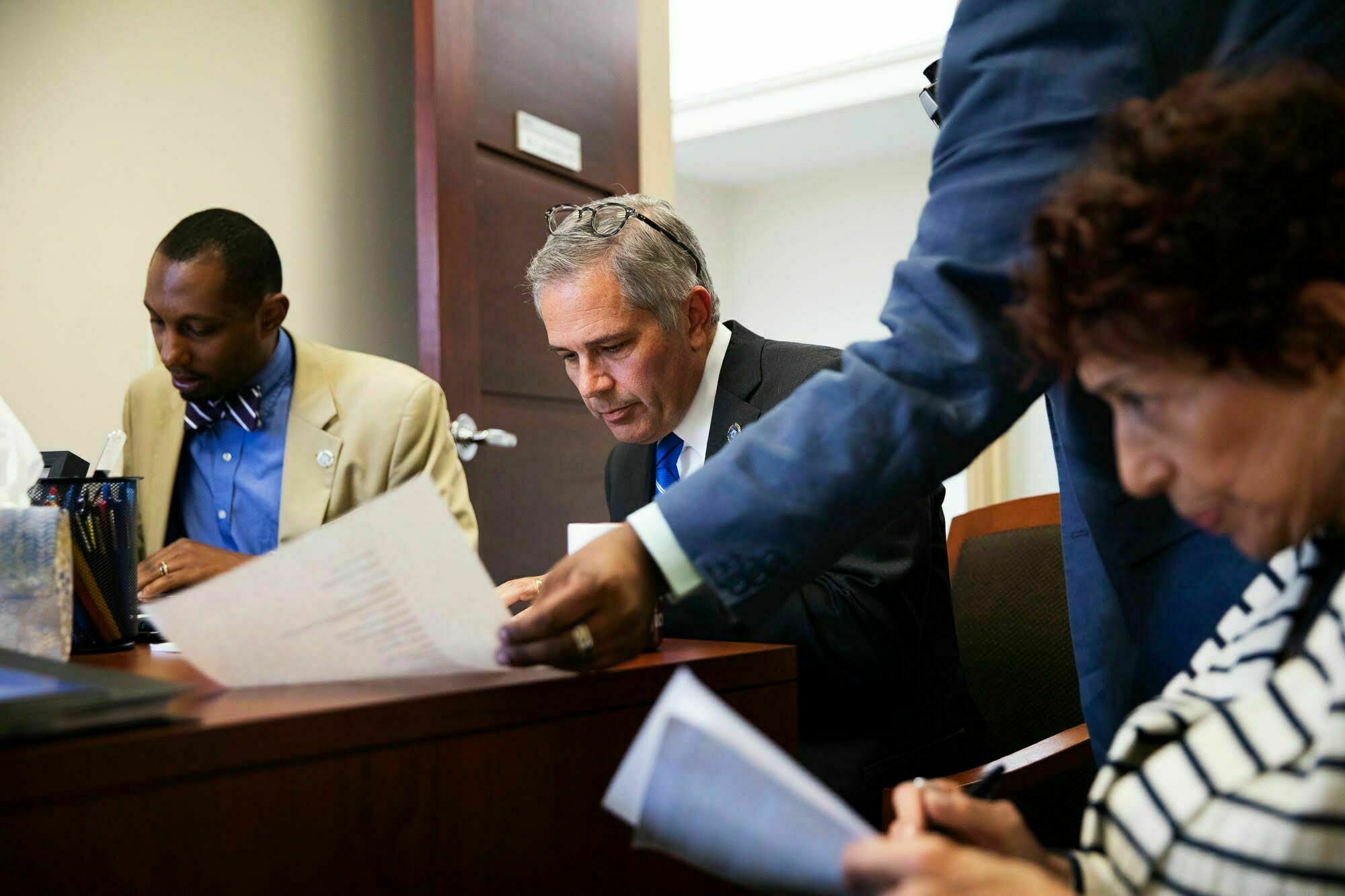 A still from the documentary, "Philly D.A.", of Philadelphia District Attorney, Larry Krasner, with his team. Ryan Collerd
By Zayrha Rodriguez

In 2018, Philadelphia’s newly elected District Attorney Larry Krasner asked a question at his first policy meeting: “Is there a way we can find out every pending marijuana possession case?”

A few minutes later, he made a sweeping decision to drop all cases for marijuana possession. He also announced he would no longer prosecute sex workers if they had fewer than two convictions. These moves signaled a new era under Krasner, a former civil rights lawyer who had sued the city’s police department 75 times and had come into office promising a wave of progressive policies.

The docu-series “Philly D.A.,” — an Independent Lens original series for PBS directed by Ted Passon, Yoni Brook and Nicole Salazar — explores Krasner's first term and the obstacles he and his team have faced in attempting to reform how crime is prosecuted in one of America’s most populous cities. It also chronicles the pushback his policies received from some Philadelphia residents and the police. The series illuminates the inner workings of the D.A.'s office and provides moving examples of people entangled in the criminal justice system.

The 8-part docu-series, filmed in a cinema verité style, does not unfold chronologically. Each episode goes in-depth on a single issue, including topics like cash bail, probation, the death penalty, juvenile detention, police brutality, the opioid crisis and gun violence.

The most personal episodes are 4 and 5. Episode 4 introduces LaTonya “T” Myers, a parole activist who gets a job at the Defender Association of Philadelphia as a bail navigator. The episode follows Myers as she juggles her new job and the mental toll of a 10-year parole sentence. Episode 5 follows Joseph Chamberlain — who was sentenced to life-without-parole at 16 years old — as he struggles with anxiety over his parole meeting and what it would mean to be free.

The docu-series details how Krasner’s approach differs from that of previous district attorneys. In the first episode, Krasner fires 31 staffers and hires activists, criminologists and defense attorneys — many of whom have been affected by the criminal justice system themselves — to take those spots. The firings were controversial and interpreted by some as personal attacks because some of the prosecutors had worked on cases where Krasner was the defense attorney. Krasner justified the firings by saying that one of the ideas he was elected on was to bring about culture change. “What it means is you have to see whether the people who are in the office are consistent with the mission,” said Krasner during a press conference about the firings. “The coach gets to pick the team.”

Under Krasner, old and new prosecutors are seen at odds with each other. The second episode shows Lisa Harvey, the juvenile unit chief, clashing with Robert Listenbee, who was appointed as the first assistant district attorney in 2018. Listenbee argues that the reason Philadelphia has a large number of children in juvenile detention is because of prosecutors’ “tough on crime” approach. In contrast, Harvey, who has been in the juvenile office for 13 years and weighs responsibility to victims more heavily, believes that ‘“you don’t have to destroy the system to get the result you want.”

Even with Krasner winning in a landslide in 2017, he faced political headwinds. His biggest opponent has been the police union, Philadelphia’s chapter of the Fraternal Order of Police (F.O.P.). Some officers felt that Krasner’s policy of reducing the number of people in jails would increase crime. The tension rises throughout the series and culminates with John McNesby, the president of Philadelphia’s F.O.P., meeting with former President Donald Trump to call attention to their disagreements with Krasner.

The series ends before the COVID-19 pandemic and last summer’s nationwide protests that called for reform in policing. While viewers don’t get an inside look into how these issues affected Krasner and his team, last month he defeated his Democratic primary challenger Carlos Vega in the Philadelphia D.A. race. Vega, one of the prosecutors Krasner fired at the beginning of his term, was supported by the police union. Krasner now goes on to face Republican challenger Charles Peruto Jr. in November, and Philadelphians will decide if the Krasner experiment gets to see another four years.

“Philly D.A.” is available to stream in PBS App and PBS Passport until June 30.

Zayrha Rodriguez Zayrha Rodriguez is a 2020 graduate from the University of North Carolina at Chapel Hill where she major in photojournalism with a minor in history. Her work has been recognized by the Hearst Journalism Awards and College Photographer of the Year. She is currently based in South Florida.