Prisons Have a Health Care Issue — And It Starts at the Top, Critics Say

When coronavirus hit federal prisons, the top officials had no health care experience. 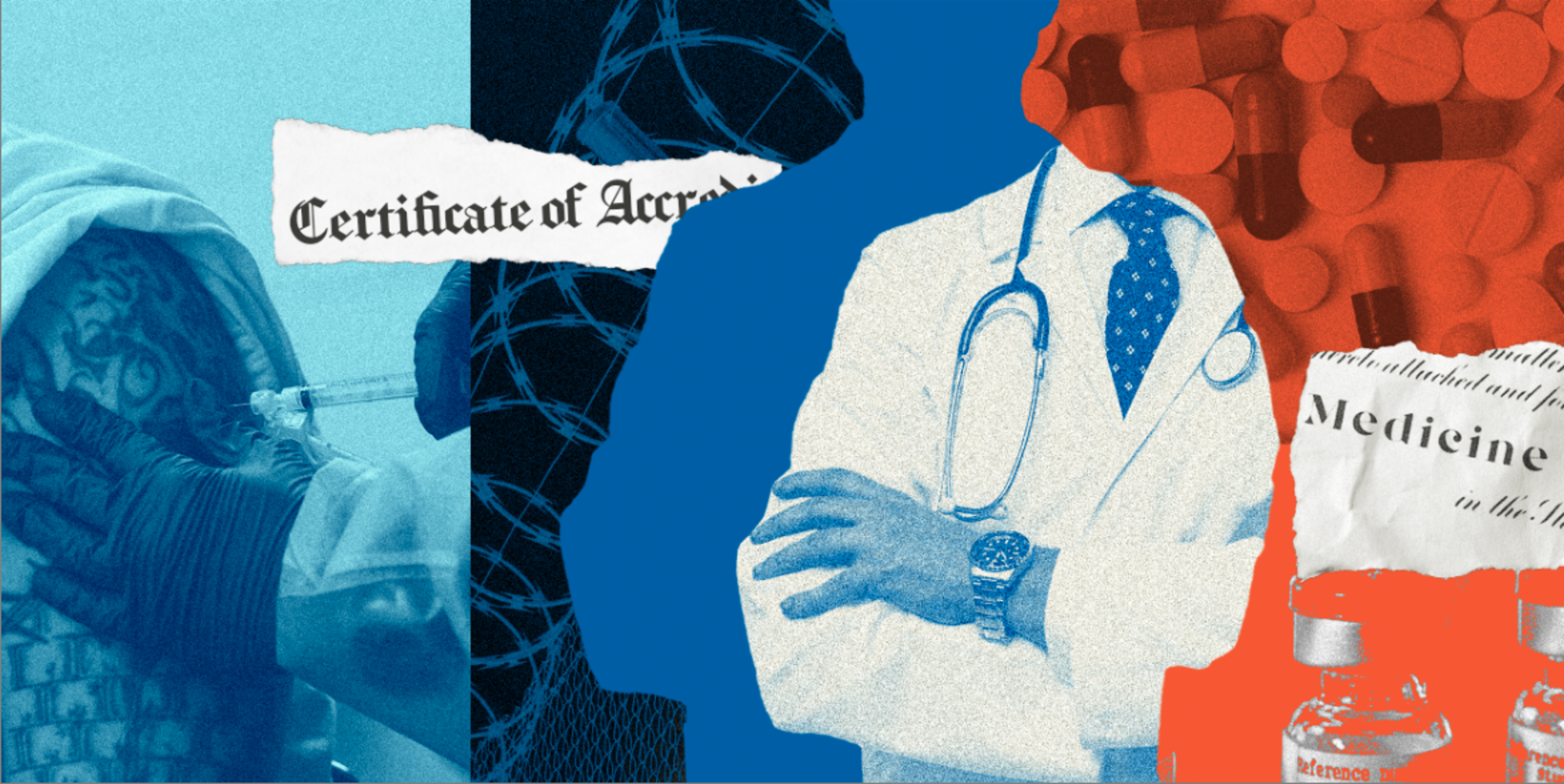 When the coronavirus hit the Federal Bureau of Prisons last year, the senior official responsible for overseeing health care and safety in all of the more than 120 lockups was Nicole English, a career corrections officer with a graduate degree in public administration — and no hands-on health care experience. When she switched roles at the height of the pandemic, her replacement, Michael Smith, also had no formal medical education.

“I would seriously question his understanding of science, but he was a nice guy,” said Bill Axford, union president at the medical prison in Rochester, Minnesota, where Smith previously worked as the associate warden.

Axford said that when he raised concerns that radon, an odorless radioactive gas that can cause lung cancer, could pose a danger to parts of the prison, Smith initially dismissed the potential threat. “He would say things like, ‘Radon’s not real,’” Axford said. Axford said that after he forwarded Smith an email from an expert on the dangers of radon, Smith agreed to take the threat seriously. On another occasion, Axford said, Smith said he believed sunscreen, not the sun, caused skin cancer.

Another union official, who declined to be named out of fear of retribution, affirmed Axford’s account.

Union leaders, prison health care workers and advocates for prisoners’ rights said it was troubling that the people leading the federal prison system’s Health Services Division during the COVID-19 crisis lacked medical licenses. Nearly 50,000 federal prisoners tested positive for COVID-19 as of last week, and at least 258 have died. The Bureau of Prisons came under fire last year from politicians and union leaders for pressuring guards to come to work sick, failing to follow its own pandemic plan and buying knock-off N-95 masks.

“This is why our agency is broken,” said Joe Rojas, a union leader who works at the Coleman prison complex in Florida. “You have people who are unqualified and you have a medical pandemic, but the leadership has zero medical background.”

Neither Smith nor English commented. Agency spokeswoman Randilee Giamusso defended the Bureau of Prisons’ response to the coronavirus as “swift and effective,” but wouldn’t comment on Smith or English’s qualifications beyond sharing their publicly listed biographies.

Instead, she wrote in an email that in their roles as assistant directors in charge of the Health Services Division, English and Smith oversaw “an array of highly qualified subject-matter experts” who can help set policies and make decisions. Those include the agency’s medical director, who is “the final health care authority for the Bureau,” Giamusso said.

But as some critics noted, the head of the Health Services Division is the one who signs some of the most important medical policies and standards, including COVID-19 protocols and home confinement guidance.

Concerns over medical care and the qualifications of those responsible for it — from administrative leaders to staff members who treat patients — are not unique to the federal system. From California to Alabama, news reports and public records show that prisons routinely hire underqualified and even disgraced medical staff.

The nonprofit National Commission on Correctional Health Care has urged since 1999 that jail and prison medical staff members have the same credentials as those who work outside, in settings like hospitals. But states often allow medical staffers in correctional facilities to work under licenses that are restricted because of past disciplinary issues — and critics say it’s part of the reason prisons were so ill-equipped to combat the coronavirus.

“To people who are inside, it’s not always clear what the credentials are of the person who is treating them,” said Andrea Armstrong, a law professor at Loyola University New Orleans who has studied prison medical care. “They have a general sense that they are getting the people who can’t get jobs anywhere else.”

Outside of prison, most patients can avoid bad doctors by doing some research and picking another physician — but people behind bars cannot.

When I was locked up in New York a decade ago, our vetting process came down to rumors and fear. “Don’t go to that doctor — he gropes people,” one of my friends warned me. “That nurse only gives you medication if she likes you,” said another. There were stories about women who had the wrong teeth removed or got the wrong medication, or one lady who was so constipated she supposedly went septic and died. We usually didn’t know if the rumors were true, but we knew they could be — and we made our health care decisions accordingly.

Sometimes, that meant we refused medical care or just didn’t seek it out. During the pandemic, prisoners from New York to Texas to California told me they hid signs of illness or refused treatment because they didn’t trust prison officials or medical staff. That suspicion is one reason some incarcerated people are still reluctant to get vaccinated, The Marshall Project reported. A little over 46% of U.S. prisoners have gotten at least one shot, compared to more than 66% of the adults in the overall population.

“I actually refused the shot for being very fearful of getting it here,” a federal prisoner told me in June. She asked to be identified only by her first name — Jenny — for fear of retaliation, and said that during her time behind bars she’s been dealing with an untreated hernia in her chest and has been taken off medication that seemed necessary, including blood pressure pills and antidepressants. “I feel like we have medical staff that does not know how to do their job correctly.”

Eventually, Jenny agreed to get vaccinated only because she read about judges who’d denied compassionate release to some prisoners who refused shots.

Armstrong, the law professor, said states often allow medical professionals who are barred from working in hospitals and private practices to work in institutional settings like prisons.

Recently, a BuzzFeed News investigation found 10 of the 12 doctors in Louisiana prisons — including six medical directors — had a history of license restrictions or suspensions due to everything from fraud to child pornography convictions. The report came weeks after a federal judge said the medical care in the state’s biggest prison was constitutionally inadequate. A prison spokesman did not respond to a request for comment, but previously told BuzzFeed that the hiring practices met state medical board standards.

In Georgia, the state paid over $3 million to settle lawsuits involving two doctors, including one — Dr. Yvon Nazaire — who was hired as a medical director while still on probation in another state. Once he moved to Georgia, he was accused of mishandling medical treatment of nine women who died, and one woman who ended up in a vegetative state after Nazaire and other prison officials ignored her medical distress and accused her of faking her symptoms, her family alleged in a lawsuit. He did not respond to requests for comment this week, but The Atlanta Journal-Constitution previously reported that Nazaire was fired in 2015 and let his medical license expire before the state could sanction him. At the time, the paper also reported that he has defended the quality of his care. A Georgia prison spokesperson referred questions to a contractor that handles medical staffing, which did not respond to a request for comment.

Investigations and court records show a history of similarly troubling hiring decisions at prisons in California, Florida, Illinois, Kansas, Mississippi, Oklahoma and Texas. Some states said they vetted doctors on a case-by-case basis, and that they provide adequate care, according to the Associated Press and The Appeal. A few states said that they couldn’t find enough doctors otherwise, or that they couldn’t compete with private practice salaries, according to The Oklahoman and Prison Legal News.

Union leaders have blamed the federal prison system’s poor handling of the pandemic on higher-ups who lack medical expertise — such as the assistant director overseeing the Health Services Division.

For 19 years, that position was held by a doctor specializing in infectious disease. By 2016, a psychologist took over the role, and three years later English got the job. She had previously worked as a guard, a case manager and a warden.

A year later, Smith took over the job. Previously, he’d attended Pikes Peak Community College in Colorado, spent six years in the Army and worked his way up the prison system from correctional officer to warden at a federal medical prison.

Some corrections workers — including Aaron McGlothin, the union president at Mendota federal prison in California — said the agency’s handling of the pandemic is proof of the need for more medical expertise among the system’s executives.

“They spent $3 million buying UV portals,” McGlothin added. “They said these killed the coronavirus — but they weren’t FDA-approved.”

That was something he considered when he declined to get vaccinated at work and instead waited several weeks to get the shot on his own.

“I don’t trust the agency,” he said of the Bureau of Prisons. “I’m not putting my health and safety in the hands of the BOP.”