The Return of the Firing Squad?

With a scarcity of lethal injection drugs, South Carolina has brought back an archaic execution method. In other states, men on death row are asking for it. 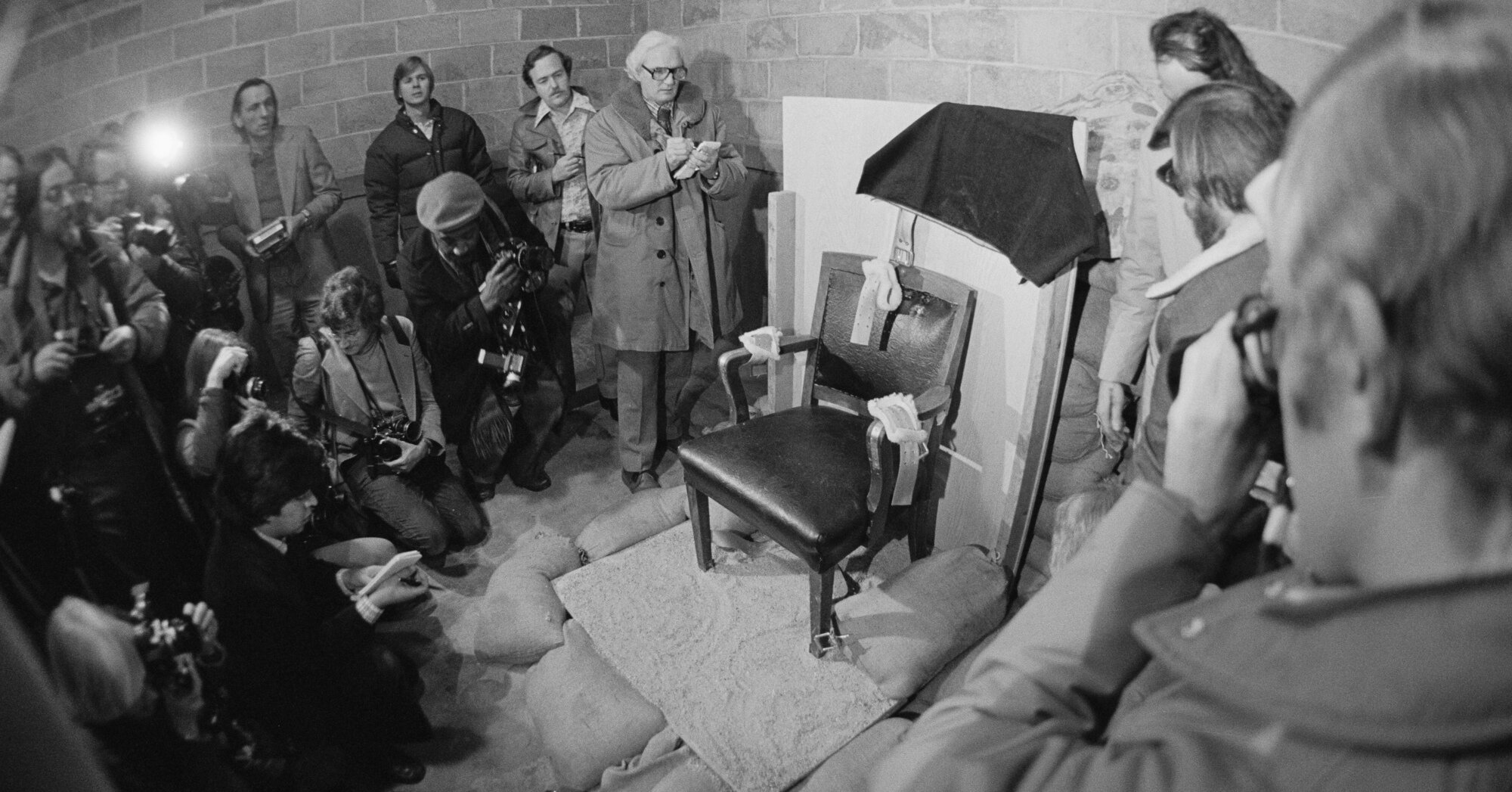 Members of the press surrounded the chair in which Gary Gilmore sat when facing the firing squad in Draper, Utah, in 1977. Bettman, via Getty Images
By Maurice Chammah
The death penalty is in flux. These are the stories that you need to know about capital punishment's past, as well as its uncertain future.

Six years ago, a man on death row in Nevada named Scott Dozier said he wanted to give up his legal fight and be executed, but there was a problem. Prison officials couldn’t find lethal injection drugs. Amid the ensuing legal turmoil, Dozier tossed off his own solution, telling me during an interview, “I’d have been just as happy if they took me out back and shot me.”

Dozier’s death, in 2019, was ruled a suicide, but now his words seem prescient. On Thursday, South Carolina scheduled the execution of Richard Moore — convicted of murder in a 2001 convenience story robbery — for April 29. Because state officials say they can’t secure lethal injection drugs, they will give him the choice between the electric chair and the firing squad. Officials have spent $53,000, by their own estimate, to renovate part of a prison to allow a three-person firing squad to carry out executions, including adding bulletproof glass to protect witnesses.

South Carolina’s not alone: Oklahoma and Mississippi have also formally adopted the firing squad, though Utah remains the only state that has actually used the method in the last century. The U.S. Supreme Court has told death row prisoners that if they want to fight lethal injection in court, they need to propose an alternative. Following dozens of botched, evidently painful lethal injections in recent years, prisoners in at least 10 states have been making a surreal argument: They would prefer the firing squad.

So, are we really about to start shooting prisoners? Although the method strikes many as cruel and archaic, conversations with scholars and a review of history suggest we should also ask why we have so consistently avoided the firing squad. The answers suggest that this is about more than just another execution method. The firing squad dredges up some of the core contradictions at the heart of American capital punishment.

“It’s an almost instantaneous death, it’s the cheapest, it’s the simplest, it has the lowest ‘botch’ rate,” said Corinna Lain, a law professor at the University of Richmond. (Federal judges have made similar points.) At the same time, it’s “more honest,” she said. Lain and other scholars have argued that Americans have long wanted — not always consciously — to disguise the violence of capital punishment. “We don’t want a mess,” wrote Douglas B. Kamerow, a former assistant surgeon general, in The BMJ, a medical journal published by the British Medical Association. “We want these evil people to disappear, to be dead, but most of us don’t want to feel bad about how they died.”

At one time, Americans didn’t seem to feel so bad about the firing squad. Numerous men were executed this way during the Civil War, and soon after, the Supreme Court approved of the method. In the 1930s, a Utah prisoner named John Deering allowed a doctor to hook him up to an electrocardiogram as he faced the guns, and his heart stopped in 15.6 seconds. (Even when nothing goes wrong in a lethal injection, the process takes minutes.)

But the method fell out of favor, as state leaders came to prefer executions that would appear technologically ‘modern’ and wouldn’t invite a public spectacle. In the early 20th century, hangings — which many felt looked too much like illegal lynchings — were moved from courthouse squares to behind prison walls, and eventually replaced by the electric chair. “We’ve gone from stoning to crucifixion, to quartering, to burning people at the stake, to hanging,” Texas legislator Ben Z. Grant told his colleagues in 1977, asking them to abandon the electric chair, which “has become a circus sideshow” and “has a way of making heroes out of those being punished.”

Instead, Grant proposed lethal injection, which premiered in Texas in 1982 and became the dominant method throughout the country. But around 2010, big pharmaceutical companies began saying they didn’t want their products to be used to kill, and cut off the supply of drugs. Some prison officials started buying drugs secretly, using cash and hiding the names of their new suppliers. Some experimented with new drugs, including fentanyl. Tennessee returned to the electric chair, while Alabama and Arizona built and refurbished gas chambers, which they have yet to use.

In many states, prisoners went to court, arguing that various drug combinations would violate the Constitution’s ban on “cruel and unusual punishment.” And they had evidence: Men were gasping and choking on the gurney. In 2014, an Oklahoma prisoner named Clayton Lockett writhed, groaned and convulsed for more than 40 minutes after he was administered lethal injection drugs. His peers sued, but the Supreme Court ruled against them, declaring that “some risk of pain is inherent in any method of execution,” and “while most humans wish to die a painless death, many do not have that good fortune.”

But the court went further, issuing what Justice Sonia Sotomayor derided as a “macabre challenge”: If prisoners want to fight an execution method, they need to propose a “known and available” alternative in court. In Oklahoma, the state asked men on death row to indicate their choice on a paper form. Some refused to engage. “Suggesting a method for how the State will kill me would make me complicit in my own death,” Julius Jones (who separately maintains his innocence) said in an affidavit.

Defense lawyers, charged with trying to save the lives of death row clients, now have to advise those clients on what way of dying they should fight for. “I’ve talked to many lawyers in that position, and it is dark, dark, dark,” said Laura Porter, a lawyer who directs the anti-death penalty 8th Amendment Project. “What the Supreme Court has asked of people feels impossible.”

Across the country, prisoners are proposing the firing squad as a better alternative to lethal injection. To make that argument, they’ve enlisted James Williams, a Texas emergency room doctor and firearms instructor who regularly appears in courtrooms as an “expert in the firing squad protocols.” Williams, who declined an interview for this story, testified on behalf of a Nevada prisoner at a court hearing last November.

According to a transcript, Williams said he’d studied the protocols of Utah, the U.S. military and several other countries. He’s spoken to gunshot victims, and when he was 18 he took a bullet to the chest. All of this led him to conclude that being shot is “relatively painless compared to virtually all of the other means of execution that we have historically used through the past four centuries.”

Lawyers for Nevada countered that some firing squad executions didn’t go as planned and were likely painful. They debated the data on the subject, which is scant and contested. Williams explained that in one Utah case it appeared “that the execution team deliberately did not aim for the target for reasons that are unclear to me, possibly to make the individual suffer more.” In one of the hearing’s stranger moments, Williams went so far as to tell the court there is a way of using a gun that’s even less prone to error: “a nice quiet bullet to the back of the head, aiming for the brainstem and instantaneous death.”

That returns us to the question of why Americans didn’t return to the firing squad until now. Legislators have used words like “medieval,” “archaic” and “barbaric” to describe it. “I think there is a deep-seated need to differentiate state killing from the actions of the person being put to death,” said Lain, the law professor. “The firing squad is so explicitly violent … The state is doing what murderers do.”

As the only state to use the firing squad in the last century, Utah is a place to look for insights, although the method’s use there is idiosyncratic, bound up with Mormon beliefs about the necessity of blood being literally shed. On three occasions since 1977, the state placed a hood over a prisoner’s head and strapped him to a chair set amid sandbags. Five shooters stood roughly 20 feet away and aimed for a round white target over his heart; one had a non-lethal bullet, based on an old tradition allowing each shooter to preserve a kind of deniability. Utah lawmakers have often expressed a fear that the method makes the state look bad and places too much attention on the condemned.

At the last firing squad execution, in 2010, more than 150 journalists showed up, and according to Fordham law professor Deborah Denno, many people around the world volunteered to shoot the guns. “It showed a side of the death penalty that’s kind of sadistic, people clamoring to be an executioner,” she said, which makes it more difficult to separate state executions from the public frenzy that accompanied lynchings well into the 20th century. “People think of lethal injection, and they think of a flu shot. It seems so violent to have a bullet go in you.”

In South Carolina, the new protocol also involves a hood and a target over the heart, but the shooters will be just 15 feet away. Prisoners and their lawyers are asking the state courts to hold off on any executions until the plan has been subjected to more legal scrutiny, calling it “barbaric.” (They’re also contesting the electric chair and other elements of the state’s law around execution methods, passed last year.) They focus on the fact that, unlike Utah, the state plans to use just three shooters and has not disclosed the caliber of rifle, “thus increasing the risk of error.” In response, a spokesperson for the South Carolina Department of Corrections pointed to the agency’s filings in state court, asserting that the method is “quick,” has a long history in the U.S. and has gained the approval of various federal judges.

Ultimately, Denno and others said, the death penalty remains popular, but not if it’s bloody. Judging by Utah’s experience, if a firing squad execution is carried out this year, it will tap into the public’s ambivalence and set off public debate about executions as a whole. Federal judge Alex Kozinski wrote in 2014, “If we, as a society, cannot stomach the splatter from an execution carried out by firing squad, then we shouldn’t be carrying out executions at all.”

Correction: An earlier version of this story incorrectly described the status of Arizona’s gas chamber, which the state used until 1999 and recently refurbished.