Five Things to Know About One of the Deadliest Federal Prisons

Key takeaways from our investigation into deaths and abuse at a U.S. penitentiary. 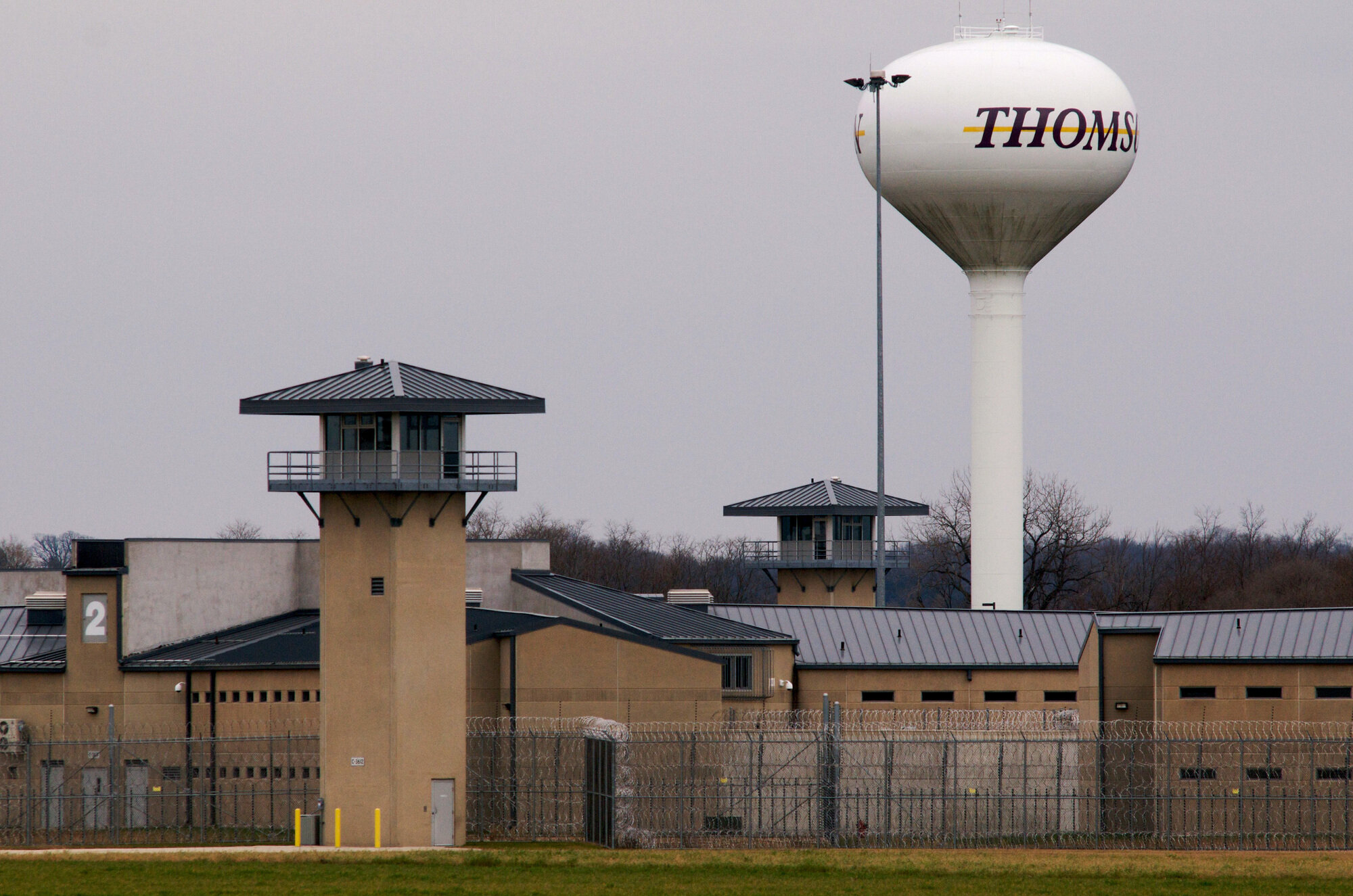 The Marshall Project and NPR investigated how the newest federal prison — the penitentiary in Thomson, Illinois — has quickly become one of the deadliest. The story is the latest in our years-long coverage of the dangers of “double-celled solitary confinement” — putting two people on lockdown in a small cell — as well as the use of force in federal prisons.

Here are five takeaways from our investigation:

The “Special Management Unit” is a high security prison program meant for some of the most dangerous people in federal custody (though many have ended up there who don’t fit that description). Volatile people are often locked down in pairs for nearly 24 hours a day in a cell roughly the size of a parking space, forced to eat, sleep and defecate just feet from each other. In 2016, we wrote about violence and abuse in that unit when it was housed in the penitentiary in Lewisburg, Pennsylvania.

After our stories ran, the Bureau of Prisons announced in 2018 that they were moving the unit to a new federal penitentiary in Illinois. Some hoped it would be a fresh start and a chance to improve conditions. But things only got worse. There have been five suspected homicides at Thomson since it opened — among the most of any federal prison in that time.

Restraints are supposed to be a last resort. At this prison, men say they’re used frequently — often as punishment.

Prison guards are only supposed to use restraints to subdue someone who is actively dangerous to themselves or others, and for as short a time as possible. But dozens of men incarcerated at Thomson reported in letters, lawsuits and interviews that officers there use these restraints frequently, and leave people in chains for hours or days at a time. We heard many of the same complaints in 2016, when the Special Management Unit was housed at Lewisburg. 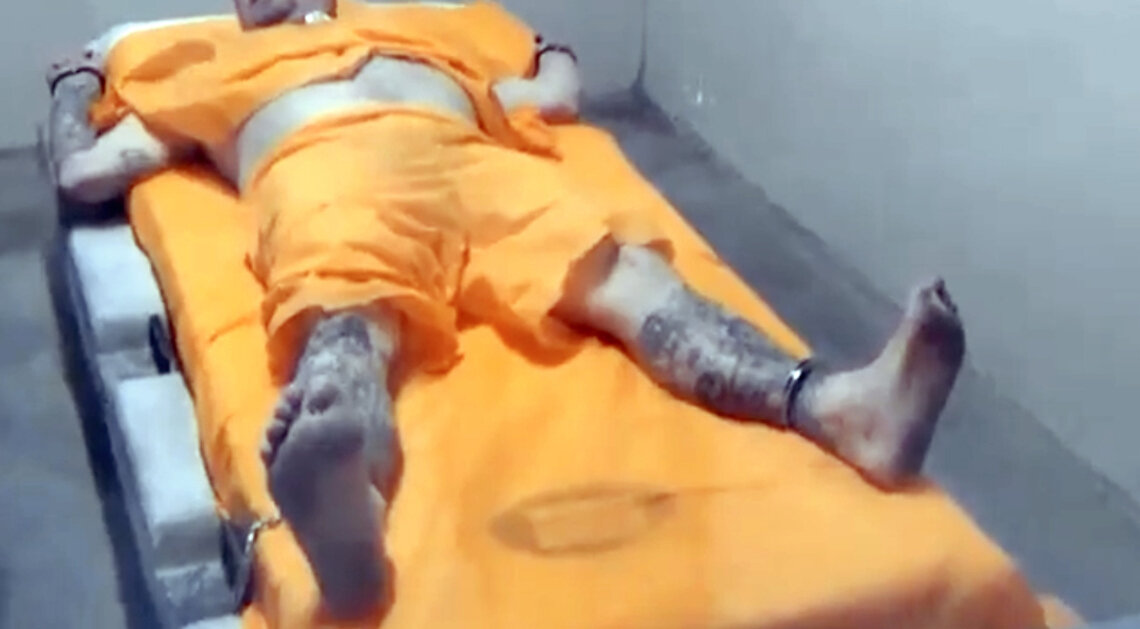 A man is held down in a four-point restraint at the Thomson federal prison.

“Ambulatory restraints” are ankle cuffs and handcuffs that are chained to a strap around the torso. Even more intense are “four-point restraints,” where each limb is chained to a bed — sometimes a concrete bed — leaving someone splayed and immobile. Many held at Thomson said they often weren’t allowed to eat or drink while in restraints, and were sometimes forced to urinate on themselves. Some said restraints were applied so tightly that they left scars — what men there call “the Thomson tattoo.”

A Bureau of Prisons spokesperson told us that he couldn’t comment on pending lawsuits, but that “restraints are not used as a method of punishing an inmate or in any manner which restricts blood circulation or obstructs the inmate's airways or in a manner that causes unnecessary physical pain or extreme discomfort.” Any allegation of staff abuse would be investigated, he said.

This level of violence is preventable.

Prisons can be violent places, especially maximum security facilities such as Thomson. But homicides behind bars often happen when warning signs are ignored, or people are knowingly put in dangerous situations. “There’s no excuse for there to be any homicides in a prison,” said David Fathi, director of the American Civil Liberties Union National Prison Project. “It’s an environment of total surveillance and control.”

Matthew Phillips — a Jewish man with a Star of David tattooed on his chest — was killed after Thomson corrections officers locked him in a recreation cage with two members of a white supremacist gang. Bobby Everson was killed at Thomson after he had been writing to his family for months, saying he felt officers were purposefully housing him with violent men.

Lawmakers say persistent understaffing is a part of the problem. And attorneys say many people held at Thomson report not getting the mental health care they need, or are denied their psychiatric medication. The Special Management Unit has been sued for this before.

A Bureau of Prisons spokesperson said in an email that prison officials consider gang affiliation, geography, religion and past incident reports when deciding whom to cell together. Any instance of an officer intentionally ignoring a valid threat would be treated as misconduct and investigated, he told us.

Federal prisons across the country are under fire right now for mistreatment.

The Bureau of Prisons has had one scandal and crisis after another. COVID-19 killed hundreds of people in federal prisons. The Associated Press recently revealed how hundreds of prison employees have been arrested since the start of 2019, and how guards sexually abused women at a federal prison in California. And understaffing escalated during the pandemic, forcing everyone from cooks to counselors to work as guards and increasing risks for staff and incarcerated people alike.

In response, the Senate has formed a new group to investigate federal prison operations, and Bureau of Prisons Director Michael Carvajal announced his resignation in January. The agency has yet to name his successor.

“Lewisburg was not only a violence factory, it was a homicide factory,” said Mark Donatelli, a defense lawyer who works on death penalty cases out of prisons. Donatelli told us he knows of at least seven people who were involved in homicides after getting out of the Special Management Unit at Lewisburg. The violence endured in one prison begets more in the future, he said.

For the people who survive such conditions, the impact lasts long after their release date. In 2019, we followed Chuck Coma when he came home from federal prison, after he nearly died from a prison assault at Lewisburg. He returned to his family with a traumatic brain injury and post-traumatic stress disorder exacerbated by the violence he witnessed inside.

A prisoner identified only as John Doe said in a federal lawsuit that being attacked by cellmates and being left in restraints at Thomson caused “extreme permanent mental anguish.”

Sebastian Richardson was housed at Lewisburg from 2010 to 2012, and sued the prison for leaving him in shackles for nearly a month when he tried to refuse a dangerous cell assignment. A decade later, he still has searing pain, swelling and numbness in his hands as a result of the cuffs, and has trouble trusting authority. “You come out with a lot of anger, and they create that,” he said.

Read our full investigation into the violence at Thomson penitentiary. See also our coverage from 2016 that laid the groundwork for this reporting — on the consequences of solitary confinement with a cellmate, and how restraints were used as punishment at the Lewisburg federal prison, often for those who refused their cell assignments.