As Corrections Officers Quit in Droves, Prisons Get Even More Dangerous 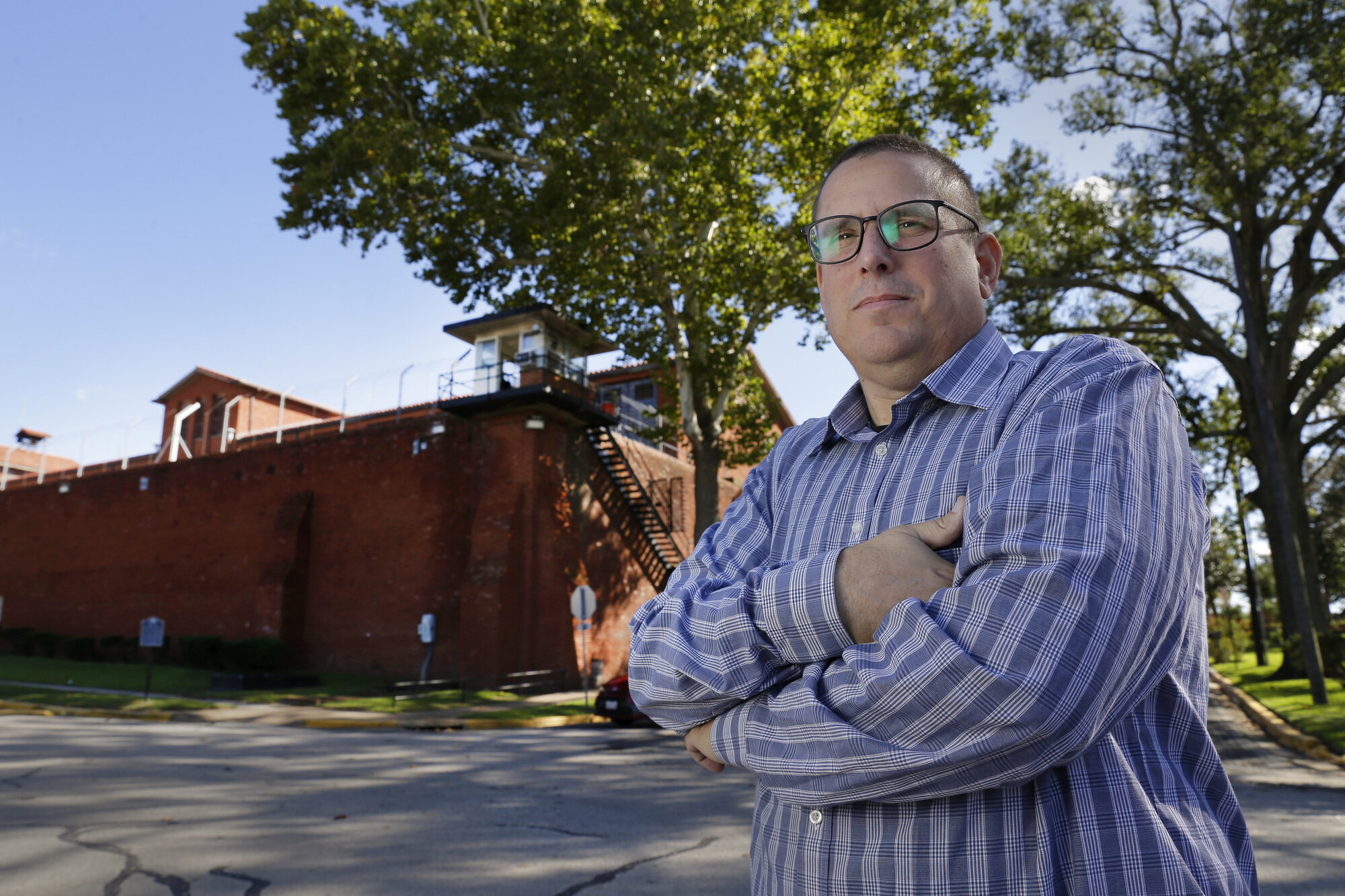 At a Georgia state House of Representatives hearing on prison conditions in September, a corrections officer called in to testify, interrupting his shift to tell lawmakers how dire conditions had become.

On a “good day,” he told lawmakers, he had maybe six or seven officers to supervise roughly 1,200 people. He said he had recently been assigned to look after 400 prisoners by himself. There weren’t enough nurses to provide medical care.

This article was published in partnership with Associated Press News.

“All the officers … absolutely despise working there,” said the officer, who didn’t give his name for fear of retaliation.

In Texas, Lance Lowry quit after 20 years as a corrections officer to become a long-haul trucker because he couldn't bear the job any longer. Watching friends and coworkers die from COVID-19, along with dwindling support from his superiors, wore on him.

Staff shortages have long been a challenge for prison agencies, given the low pay and grueling nature of the work. But the coronavirus pandemic — and its impact on the labor market — has pushed many corrections systems into crisis. Officers are retiring and quitting in droves, while officials struggle to recruit new employees. And some prisons whose populations dropped during the pandemic have seen their numbers rise again, exacerbating the problem.

There is no one thing pushing prison employees out in high numbers now. Some are leaving for new opportunities as more places are hiring. University of Michigan economist Betsey Stevenson pointed to the increased risk of COVID-19 for people working in prisons.

“When jobs become riskier, it becomes harder to attract workers,” she wrote in an email. “By failing to protect prisoners from COVID, the criminal justice system not only created an unfair risk of severe illness and death for the incarcerated, but the increased COVID risk to employees has undoubtedly contributed to staffing shortages.”

Unions representing prison officers in states including Massachusetts and California and at the federal level also claim vaccine mandates will drive out unvaccinated employees and exacerbate understaffing, though it’s unclear how big of an impact those rules will have.

“There are dozens of reasons to leave and very few to stay,” said Brian Dawe, national director of One Voice United, a nonprofit supporting corrections officers. “Understaffing, poor pay, poor benefits, horrendous working conditions. … Officers and their families in many jurisdictions have had enough.”

Employers from construction companies to restaurants are having difficulty hiring and keeping people. Nearly 3% of American workers, 4.3 million, quit their jobs in August, according to new data from the U.S. Bureau of Labor Statistics.

But the stakes are higher in prisons, where having fewer guards means significantly more dangerous conditions for incarcerated people. And for the officers left behind, worsening shortages have made an already difficult job unbearable, many say. 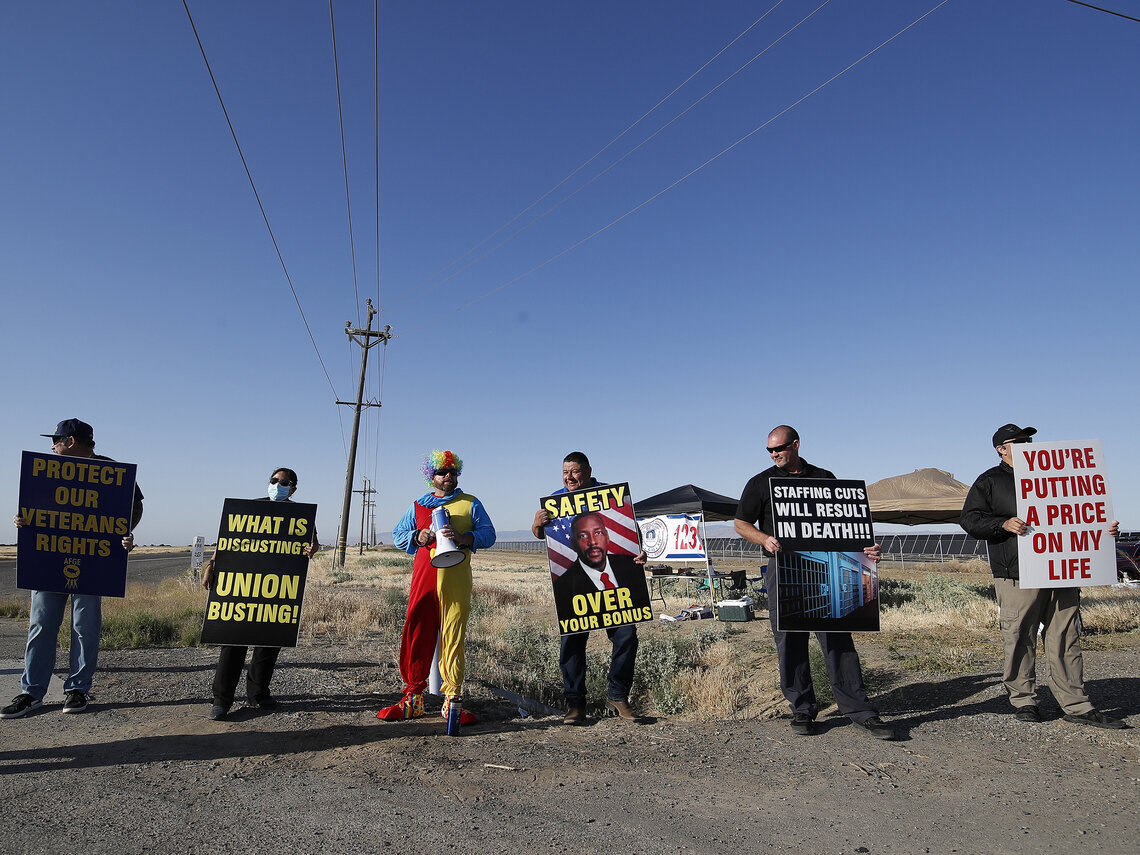 Corrections officers protest working conditions and staff shortages outside the Federal Correctional Institution in Mendota, Calif., in May.

In Georgia, some prisons report up to 70% vacancy rates. In Nebraska, overtime hours have quadrupled since 2010, as fewer officers are forced to work longer hours. Florida has temporarily closed three prisons out of more than 140 facilities because of understaffing, and vacancy rates have nearly doubled there in the last year. And at federal prisons across the country, guards are picketing in front of their facilities over understaffing, while everyone from prison teachers to dentists is pulled in to cover security shifts.

In recent weeks, reporters from The Marshall Project and The Associated Press have spoken with workers, officials, attorneys and people incarcerated in more than a dozen prison systems to understand the consequences of the staffing shortfalls.

The federal Bureau of Prisons says about 93% of its front-line guard positions are filled, with little more than 1,000 vacancies, though workers in many prisons say they’re feeling the pinch as others are conscripted to fill in for missing officers.

Asked last week in a U.S. Senate hearing about federal prison staffing, Attorney General Merrick Garland said, “I agree this is a serious problem at the Bureau of Prisons.”

In Kansas, state Department of Corrections Secretary Jeff Zmuda testified before the legislature that the problems now are unlike any he’s seen in his career. Kansas has more than 400 unfilled jobs for uniformed officers, a number he expects to grow in the coming months as workers are lured by other employers that pay better.

Quitting can have a snowball effect, said Doug Koebernick, inspector general of the Nebraska correctional system. “People leave, then that creates more overtime and stress and more vacancies,” he said. “It’s like this spiral.” Many corrections officers said they were forced to work more overtime as fewer people showed up for shifts. In Texas, guards have worked as much as 16-hour days.

Inside prisons, growing shortages mean a rise in lockdowns. Restrictions that might have begun as a way to stop the spread of COVID-19 have continued because there aren’t enough guards to supervise activities. Some incarcerated people say they can’t take classes, participate in group therapy sessions or even work out in the recreation yard or take a shower. That can force those in general population into de facto solitary confinement, and those already in segregation into near-total lockdown.

“If we get rec once a week, that’s a good week,” said Anthony Haynes, who is on Texas’ death row in a unit that is barely half-staffed. “We don’t always get showers.”

A spokesman for the Texas Department of Criminal Justice did not respond to Haynes’ claims but acknowledged that staffing is a challenge in Texas’ prisons.

“Before COVID-19, staffing was frequently impacted by economic surges and competing employment opportunities,” said spokesman Robert Hurst in an email. “The pandemic has exacerbated these issues. We also recognize that the job of the correctional officer is one of the most difficult in all of state government.” He added that Texas has closed six of its more than 100 facilities in the last year due to staffing problems.

Kansas has cut job training and reduced supervision for people after they’re released. Two-thirds of the men in Nebraska’s prisons can’t see visitors on the weekends — when most families are free to travel — because of understaffing.

The constant isolation takes a toll. “As of October, we have not had yard for two weeks,” wrote one man at Illinois’ Pontiac Correctional Center, where officials report 35% of corrections officer jobs are vacant. (His testimony was compiled by lawyers suing the state prison system over a dearth of mental health care.) “I feel very overwhelmed … I can’t talk about my problems to anyone. I pace back and forth and talk to myself because there’s nothing else to do.”

Mental health care is dwindling, prisoners and lawyers argue, as people in prison grow more desperate. In Illinois, cancelled one-on-one therapy means what little counseling is available happens briefly through a cell door, in full earshot of the rest of the tier, said attorney Alan Mills of the Uptown People’s Law Center, which has sued the state corrections department over inadequate mental and physical health care, due in large part to a lack of qualified staff.

A spokeswoman for the Illinois Department of Corrections said that Pontiac continues to provide out-of-cell programming and one-on-one counseling. “​​While staffing challenges have had an impact on scheduling, the department is committed to delivering the highest quality mental and medical health care as possible,” said Lindsey Hess in an email.

Officials from corrections departments in Georgia and Washington, where the governor halted the transfer of people from county jails to prisons for two weeks due to staffing changes, did not respond to repeated requests for comment.

Dr. Homer Venters, a former chief medical officer for the jail system in New York City, inspects conditions in prisons around the country for court cases. Understaffing will lead to an increase in preventable prison deaths, he said, as the quality of care reaches new lows.

"Things are much worse behind bars now than they have been for a long time,” Venters said. “There are so many staff that have left. That means that basic clinical services, like getting to scheduled appointments, just isn’t happening the way it was even five years ago."

Violence is also on the rise in some prisons. The Southern Center for Human Rights recently sued the Georgia Department of Corrections over lockdowns and dangerous conditions: There were 48 suspected homicides in the state’s prisons between January 2020 and August 2021 and 38 suicides. (In 2017, in comparison, there were eight homicides.) Hundreds of people incarcerated at three state prisons rioted last summer, after being locked in their cells for weeks and monitored by as few as six guards at a time. In July, the state had a 56% annual turnover rate for corrections officers, and 40% of those jobs were vacant, according to department documents. The U.S. Justice Department announced an investigation into the corrections department in September, citing understaffing as a primary concern.

Meanwhile, corrections departments say they are trying harder than ever to recruit new staff. They’ve boosted social media posts and in-person job fairs. In Indiana, they raised the starting pay for corrections officers a dollar to $19 an hour. Others are giving perks like hiring bonuses, better pay at critical units, earlier pay raises or, in Kansas, extra time off for current employees who refer new hires.

But some hurriedly hired cadets might not last long.

Brandon Robert Graham started training at the Walla Walla State Penitentiary in Washington in August 2020 and within two weeks was on the tier. “They were in such a hiring crisis that I was a ‘rapid hire,’” he said. At first, he was excited about the salary and “great benefits” compared with other jobs in the area. But as more entry-level jobs opened up, he started looking elsewhere.

“I was on night shift. I never got to see my fiancée,” he said. “I did so much overtime that I thought I was getting sick from the stress.”

He left in July to look for a new job.