Progressive Sheriffs Are Here. Will They Win In November? 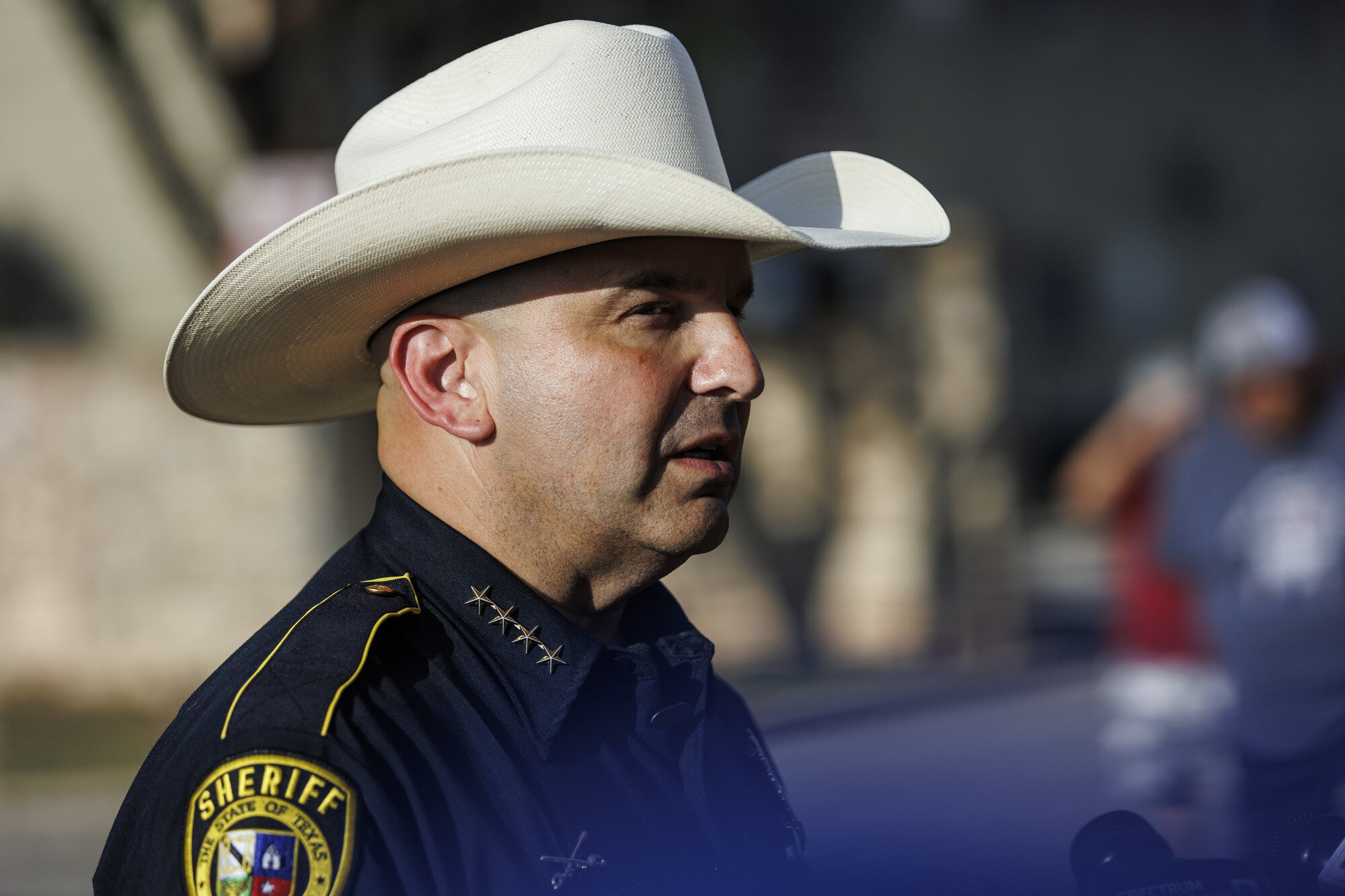 Sheriff Javier Salazar of Bexar County, Texas, pledged to investigate migrant flights that took off from his jurisdiction to Martha’s Vineyard in Massachusetts. Sam Owens/San Antonio Express-News
By Maurice Chammah

You may have heard of “progressive prosecutors,” like District Attorney Larry Krasner in Philadelphia, who campaigned to shrink the prison system and protect defendants’ rights. But what would it mean for a sheriff to be progressive?

Susan Hutson adopted the term last year, when she became the first Black woman elected sheriff in Louisiana. Hutson promised to make New Orleans’ jail more rehabilitative, less deadly, and someday possibly obsolete. Supporters of Alex Villanueva called him progressive when he was elected sheriff in Los Angeles, in 2018 — before a series of scandals that have imperiled his reelection next month.

Other sheriffs have earned praise from the left for who they oppose. Last month, Sheriff Javier Salazar of Bexar County, Texas, pledged to investigate migrant flights to Martha’s Vineyard in Massachusetts, which took off from his jurisdiction. Suddenly, Salazar was the foil of Florida Gov. Ron DeSantis, whose administration organized the flights from San Antonio. Salazar had already earned national notice for his stance on abortion, writing on Facebook, “I will not persecute Texas women.”

More may join this informal club. This coming election day, several candidates are pledging to reconsider their counties’ harsh immigration enforcement. Bolts has covered immigration-focused races in Maryland, Massachusetts and North Carolina. These stories reflect a growing desire on the left to elect sheriffs who promise to make policing and incarceration safer, less punitive, and more in line with movements for racial equality.

But they also raise the question of whether it’s even possible for a sheriff to advance progressive aims, given the history of the office.

We recently published a wide-ranging survey of American sheriffs, describing how these figures rose to power in the Jim Crow South and on the Western frontier. Sheriffs today tend to be politically conservative, White and male, and many are aligned with former President Donald Trump. Some identify with more extreme groups, including the Oath Keepers.

The small number of sheriffs who identify as progressive tend to come from larger cities or liberal enclaves. A few have gained attention for pursuing more rehabilitative programs in jails or training their deputies to de-escalate potentially violent situations.

An early archetype was Tom Dart, who in 2006 was elected sheriff in Cook County, Illinois, which encompasses Chicago. Dart emerged as a darling of national news outlets — a professorial figure in glasses and North Face jackets, who said many in his jail needed mental health treatment. After nearly a decade in power, Dart said he’d stop using solitary confinement.

There are also conservative stars, of course. As the country grew more partisan, sheriffs Joe Arpaio of Maricopa County, in Arizona, and David Clarke of Milwaukee, Wisconsin, openly campaigned for Trump. As president, Trump reinvigorated 287(g), a federal program that lets sheriffs play a greater role in immigration enforcement.

Some counties rebelled: As part of an anti-Trump wave in the 2018 midterms, North Carolina elected a handful of sheriffs who promised to exit the immigration program. Over the next few years, candidates made similar promises in Georgia, Louisiana and Virginia.

After the May 2020 murder of George Floyd and the ensuing protests, a few sheriff candidates began campaigning to ban chokeholds, require police-worn body cameras and release videos and records of jail deaths. Some counties elected their first Black, Latina and female sheriffs.

This November, a social worker and a nurse are running for sheriff in two counties in Massachusetts. If either wins, they will bring a new kind of professional diversity to the role, which is unsurprisingly dominated by people with law enforcement backgrounds.

Most sheriffs who ran on progressive platforms have not been in power long enough to properly assess their impact, but given that they run jails and make arrests, there are plenty of ways for them to disappoint some of their supporters. Salazar in San Antonio has had deaths and claims of abuse in his own jail, as Jessica Pishko wrote in her newsletter on sheriffs, Posse Comitatus. Deaths and violence have also continued at Hutson’s jail in New Orleans.

Some progressive sheriffs are seeking bigger budgets in order to provide better care in their jails, and they may eventually clash with some on the left who want to abolish sheriffs entirely.

Although that movement remains small, at least one sheriff has found the idea persuasive.

Our survey led us to Kim Stewart, who in 2018 became the first woman elected sheriff in Doña Ana County, New Mexico, and the state’s first openly gay sheriff. She’s running for reelection this year, but wrote to us, “Sheriff candidates should have to meet certain education and experience levels or abolish the office entirely.” In a follow-up interview, she blasted her peers’ broader focus on guns and immigration. “The cowboy hat and the six-shooter on their hip tells me so much about their mindset,” she said, adding that it doesn’t help sheriffs look relevant in the eyes of the public. “More of us need to speak out and say, ‘This doesn’t represent us.’”