DeSantis made a spectacle of arresting voters with felony convictions. Now, some eligible voters are opting out of midterms even beyond Florida. 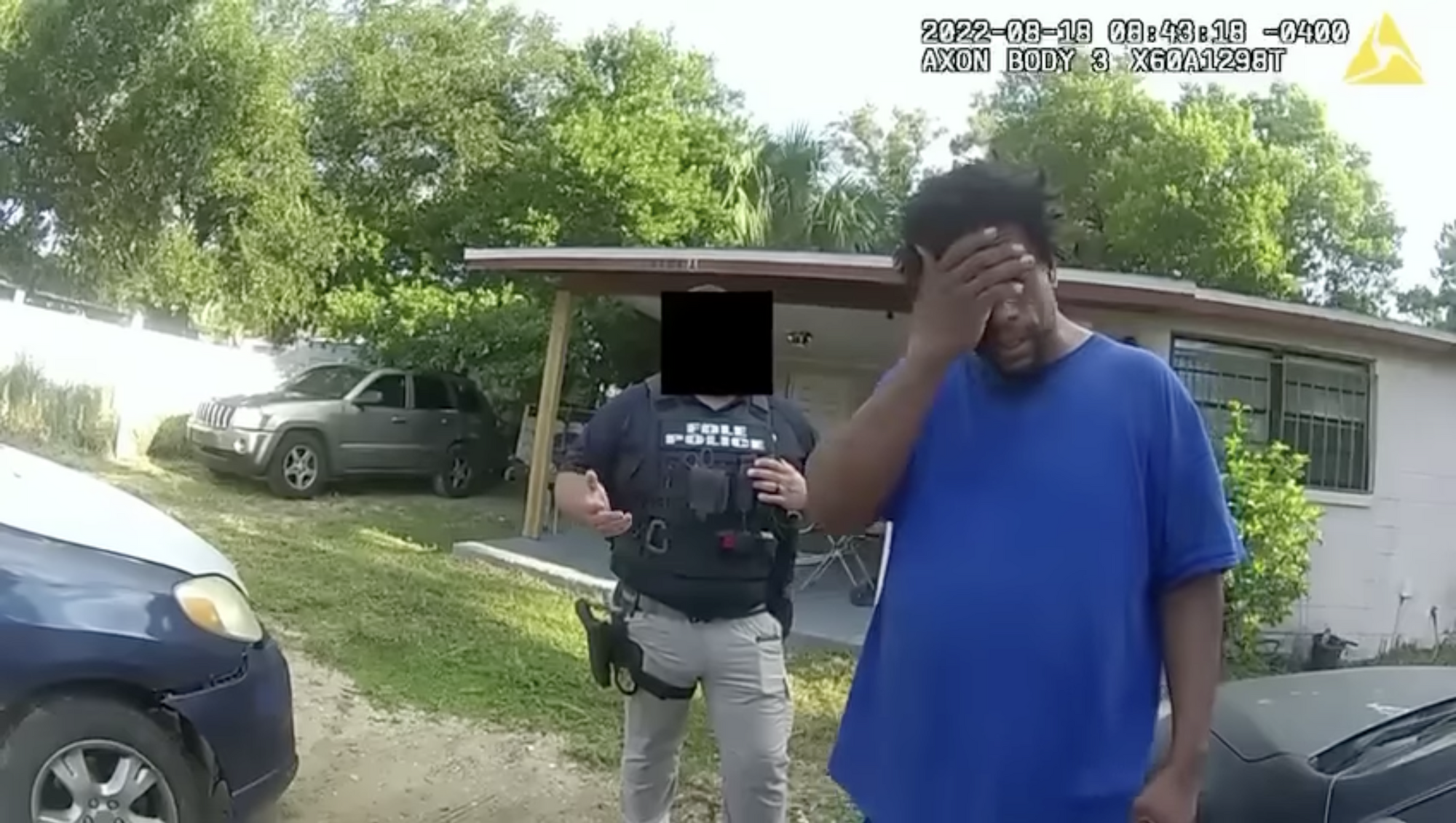 Florida police arrested Tony Patterson for voter fraud in Tampa on Aug. 18, 2022, charging that he voted in the 2020 elections despite having a disqualifying felony conviction. Tampa Police Department
By Nicole Lewis and Alexandra Arriaga

For years, Derrick Oliver has traveled across the state of Alabama helping register formerly incarcerated people to vote. Most often, he says he spends his time correcting the misinformation that any Alabamian with a felony conviction has permanently lost the right to vote.

But this year he encountered an overwhelming barrier: fear.

In August, Florida Gov. Ron DeSantis announced the arrests of several formerly incarcerated people for voter fraud because they had cast ballots in the 2020 election, despite having a disqualifying felony conviction. News and videos showing their confusion and dismay as they were arrested aired on TV news stations and major media outlets across the country.

This article was published in partnership with WLRN, AL.com and Montgomery Advertiser.

“Immediately, our phones were blowing up,” Oliver said. “People want to know, ‘Hey, did you hear about this? What's going on with it? Does this affect us in Alabama?’”

During a press conference just days before Florida’s primary election, DeSantis billed the arrests as the “opening salvo” of an office that was set up on July 1 to investigate election crimes. Voting rights experts have widely panned the move as the latest GOP-led effort to cast doubt on election integrity and discredit the 2020 election results.

In conversations with several formerly incarcerated people and nine volunteers working to register the people with felony convictions in several states, The Marshall Project found that Florida’s raids reverberated well beyond the state’s borders.

Roughly 20 states passed legislation returning or expanding the right to vote to people on probation and parole or those with a felony conviction who have served their time since 2016. But figuring out if their rights have been restored is a daunting task for the previously incarcerated who, in many states, have to navigate Byzantine rules and regulations governing their eligibility. Often, the very agencies tasked with notifying the newly eligible of their rights fall short of their mandate. Sometimes, the agencies spread incorrect information.

Getting it wrong and voting when they are not technically allowed to do so brings a threat of a new felony conviction and a return to prison. Now, the 19 arrests in Florida are proof for some that casting a ballot isn’t worth the risk. (Prosecutors have already dropped charges for one man.)

That’s how Iris Gray feels. She was convicted of fraudulent use of a debit or credit card, a Class C felony in Alabama. When Gray first heard about the news of the arrests in Florida, she couldn’t bring herself to watch the videos. Though she is legally eligible to vote in Alabama, and officially registered, she does not plan to vote in the midterms.

“No, ma’am,” she told The Marshall Project in a phone interview. “I’m not gonna vote.”

Prosecutions of the formerly incarcerated for voting are not new. In April 2022, a Tennessee prosecutor dropped all charges against Pamela Moses, who had been sentenced to six years and a day in prison after attempting to register to vote in 2019. Moses registered after being incorrectly informed by her probation officer that her probation had ended.

Such prosecutions made national news, and volunteers working to register the formerly incarcerated say people often cite them as reasons they do not want to vote. But the high-profile nature of the Florida arrests, and their connection to the GOP narrative of election fraud, has intensified alarm.

Volunteers registering people to vote with the Georgia Justice Project, a nonprofit dedicated to easing barriers to reentry after prison, say they’ve seen an uptick in people calling into their offices seeking reassurance that they are legally eligible to vote because of what happened in Florida. “When people try to exercise the franchise and are getting arrested, absolutely that's a chilling effect,” said Doug Ammar, the executive director. “There’s a lot of legitimate concern for folks who are vulnerable and have had encounters with the law who will perceive a threat.”

Confusion and fear among the formerly incarcerated because of frequent changes and variations in voting laws across states is a longstanding obstacle. As a result, these people often remain de facto disenfranchised even when they are legally eligible to vote, according to Richard Fording, a political science professor at the University of Alabama.

“People in that situation are often reluctant to come forward,” he said. “They don't know how to investigate this on their own, there’s a lot of stigma, to ask for help you need to identify yourself as someone with a felony conviction.”

This year alone, an estimated 4.6 million people, roughly 2% of the voting-age population in the United States, will be ineligible to vote as a result of felony disenfranchisement laws and policies. That’s according to a recently released analysis by the Sentencing Project, a nonprofit organization aiming to reduce incarceration. Many of these laws date to the Reconstruction era, when they were designed to limit the political participation of the nation’s Black citizens.

The racial disparities in the ability to vote as a result of these laws are striking. In eight states — Alabama, Arizona, Florida, Kentucky, Mississippi, South Dakota, Tennessee, and Virginia — the Sentencing Project found, more than 1 in 10 Black adults is legally barred from voting. Across the country, 1 in 19 Black people of voting age is barred from voting, a rate 3.5 times higher than their White peers. Fifteen of the 19 people successfully detained by DeSantis’ election task force are Black. The South has historically had the most arcane and complex laws limiting voter eligibility after time in prison.

Despite their fears that a mistake could again land them behind bars, many formerly incarcerated people lead registration efforts of their peers. For Oliver, who spent time in federal prison for bank robbery before being released in 2018, the risk of a prosecution feels real but isn’t strong enough to stop him from encouraging others to vote. He works as the state coordinator for The Ordinary People’s Society, which was founded by Kenneth Glasgow in 2001 to build political power in communities with high rates of incarceration. Glasgow was also once incarcerated and is currently facing federal drug charges (He pleaded not guilty and sees the charges as blowback from his political organizing).

Oliver says that during his conversations when he is out door-knocking, people express misgivings about the Florida arrests.

“There’s a fear: ‘I want to do the right thing but not sure what that is at this point,’” he said. “That’s more or less the feeling.”

Research shows that election administrators and criminal justice officials often hold incorrect beliefs about voting rights for formerly incarcerated people. Many of those arrested in Florida said they were told they were eligible by state election officials or were able to register without anyone telling them they did not qualify.

The task of explaining their rights is often left to volunteer groups such as the League of Women Voters, Florida Rights Restoration Coalition and the NAACP. These groups worked to re-register voters in Florida after the passage of Amendment 4 in 2018, which initially restored voting rights to over 1 million people before the legislature required that all legal financial obligations accompanying a conviction must be paid off first.

As in Florida, many voter registration forms in other states do not actually clarify who is eligible or how to check eligibility status after incarceration. Instead, voters must certify that the information they are providing is correct under the penalty of criminal prosecution. Unlike applications for driver’s licenses, passports, or other forms of identification, election officials are often not able or not required to inform people of their eligibility status.

“People operate under the assumption that if you are ineligible they will tell you,” said Blair Bowie, who leads the Campaign Legal Center’s Restore Your Vote efforts, which helps people regain their voting rights. “That is just how most applications work.”

During a voter registration drive in Alabama in partnership with Greater Birmingham Ministries, Bowie said a few of the people reached via text message cited Florida as a reason they would not accept the offer to help restore their voting rights. The Marshall Project reviewed the text correspondence and found the voters brought up Florida unprompted before declining to move forward.

“Don’t want to fall into a trap like they got in Florida,” one person responded.

For one man, the decision comes down to a common sense calculation: Why risk everything he’s built after time behind bars just to cast a ballot on election day?

“I had read that some of the guys in Florida that had their voting rights restored had gotten into some type of trouble cause of it,” he said in his text response; he withheld his name to limit the stigma associated with having a felony conviction. “I have a family and a daughter in college and I am the sole breadwinner. I cannot do anything that would create any scenario to jeopardize that.”