Crazy or Faking It?

The impending execution of Scott Panetti and the search for a standard of sanity.

Nearly 30 years ago, the U.S. Supreme Court ruled that mentally ill inmates could not be executed for their crimes unless they were deemed “competent,” a condition that remained vaguely defined for more than two decades. The court tried to clarify the definition in 2007 through the case of Scott Panetti, a schizophrenic inmate in Texas who murdered his in-laws and then, acting as his own lawyer at trial, wore a cowboy outfit and tried to subpoena John F. Kennedy and the Pope. “Jesus Christ, he doesn’t need a subpoena,” Panetti said at one point during the trial. “He’s right here with me, and we’ll get into that.”

Panetti is now scheduled for execution on the evening of Dec. 3. His lawyers are asking for a stay so that his competency can be evaluated; they have petitioned the state’s Board of Pardons and Paroles to recommend him for clemency, claiming that the execution of someone so mentally ill “would cross a moral line.” Prosecutors claim that Panetti is faking it.

Regardless of what happens next, the fact that Panetti is facing a lethal injection despite a 30-year history of documented mental illness demonstrates that the ambiguities of the legal standard of “competency” he helped to define are far from resolved. 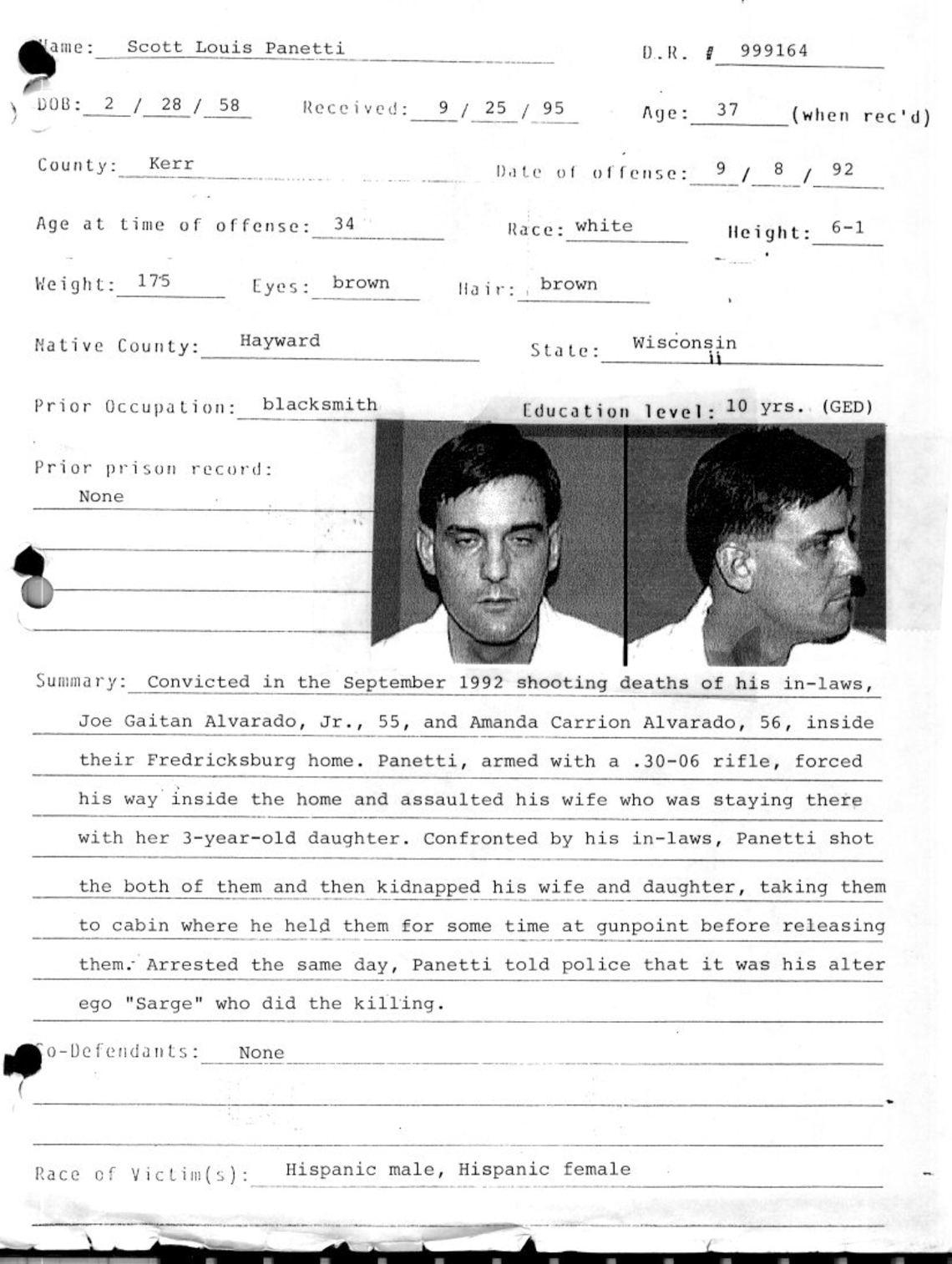 In the 1986 case of a Florida inmate named Alvin Ford, the U.S. Supreme Court ruled that executing an insane person violated the constitutional ban on cruel and unusual punishment. Justice Thurgood Marshall, delivering the court’s decision, wrote that the definition of “cruel and unusual” changes over time, reflecting the “evolving standards of decency that mark the progress of a maturing society.” Justice Lewis Powell Jr. added in a concurrence, “I would hold that the Eighth Amendment forbids the execution only of those who are unaware of the punishment they are about to suffer and why they are to suffer it.”

But the court did not set a standard for who was mentally fit and who was not, leaving that determination up to lower courts, who would hear experts for the prosecution and defense and decide on each inmate’s competency.

The standard of what constitutes mental illness remained undefined even as a series of inmates widely believed to be severely schizophrenic and delusional were put to death, including Arkansas inmate Charles Singleton, who insisted his victim was still alive, and Florida inmate Thomas Provenzano, who claimed he was Jesus Christ.

The Supreme Court decided in 2002 to ban the death penalty for the “mentally retarded” — the more current term is “intellectually disabled” — and then in 2005 for those who committed their crimes before the age of 18. In both cases, the court cited the idea of “evolving standards of decency,” and decided that these defendants were less culpable for their crimes.

Mental health experts and defense lawyers assumed that the next group of defendants lined up to take advantage of these “evolving standards” would be those diagnosed with psychotic disorders like schizophrenia.

The problem was finding a clear way to define mental illness. The American Bar Association partnered with the American Psychological Association on a task force, which determined that it would be more difficult to ban the death penalty for the mentally ill, since psychotic disorders do not offer the same thresholds as intellectual disability or youth. There’s no number, like an IQ or an age, that courts can use to separate the insane from the healthy.

People with mental illnesses often understand they have committed a crime and do not show outward signs of instability. “There’s a misperception that if you’re incompetent to be executed you’re a drooling idiot,” says John Blume, a defense attorney and professor at the Cornell University law school. “People like Scott Panetti can have moments of lucidity.” Often, if a defendant appears sane, it is assumed that they are faking the illness to avoid punishment. “There’s a subtext of thinking that inmates are trying to game the system.”

In Panetti’s case, this has not been a subtext; prosecutors have explicitly argued he might be feigning mental illness. Defending himself at trial in 1994, Panetti flipped back and forth between incoherent ramblings (“The ominous auras, acts of law and reference with conflicts, with truth, truth that’s overly blatant, acceptance of calder(ph), unknowingly for convenience not danger not”) and moments of clarity. "I had problems with certain jurors that I couldn't think clearly enough to ask them a certain question and I declined to ask those questions,” he told the judge after jury selection, asking for a delay before the start of the trial. “I'm not looking for a long delay, but I'm going to definitely need a couple of days to get my medicine."

“We’re all kind of watching and going, 'What is Scott going to do next?'” recalls Scott Monroe, who was appointed to stand by as Panetti’s attorney but could not participate in the trial. He says some of Panetti’s cross-examinations were “lucid and appropriate.” But then Panetti described his crime — the violent shooting of his in-laws — to the jury in a chilling, third-person register, “like he was watching a movie.”

“I think he scared them,” Monroe says.

Defense attorneys and mental health experts have long claimed that a unique problem for insane defendants is that their illnesses, rather than leading to sympathy on the part of juries, can make them seem more dangerous. “People with mental illness are not more dangerous than the general population, but they are scarier,” says Christopher Slobogin, a professor of psychiatry at the Vanderbilt University School of Law who was on the American Bar Association’s task force on mental illness and the death penalty.

Appeals courts initially agreed with the judge at Panetti’s trial, who deemed him competent to be tried, and the jury, who found him deserving of a death sentence. A series of appeals arguing that his mental illness should have precluded a death sentence was unsuccessful.

When an execution date was set in 2004, Panetti’s attorneys changed tactics, arguing that under the Ford decision, their client should get a hearing over his competence. A lower court found that Panetti understood the fact that he would be put to death, and that was enough to qualify him for execution.

The Supreme Court disagreed. In its 2007 decision Panetti v. Quarterman, the court sent his case back for another competency hearing, explaining that the lower courts needed to find that Panetti had a “rational understanding” of his execution and why it would happen.

Panetti’s case was hailed as a landmark by capital defense lawyers, but since then they have realized that lower courts are not significantly more likely to halt executions on these grounds. (The U.S. 5th Circuit Court of Appeals, which oversees Texas, has never done so). After surveying 140 cases in which attorneys argued their client was incompetent to be executed, Professor Blume and his colleagues wrote, “While some guidance beats no guidance, in the post-Panetti world lower courts and lawyers are still flummoxed as to what showing establishes a death row inmate’s incompetency to be executed.”

And Panetti himself did not benefit from the ruling that bears his name.

At a 2007 evidentiary hearing, the defense and prosecution again debated whether he understood the reason for his execution. Two defense doctors stated that Panetti believed, in the court’s words, “that his execution was part of a satanic conspiracy to keep him from preaching,” while two prosecution doctors countered that he was “at least partially fabricating his symptoms to thwart their attempts to administer structured examinations designed to detect malingering.” The 5th Circuit Court of Appeals agreed with the prosecution, and this past October, the Supreme Court refused to intervene, allowing the state to set an execution date.

Panetti will face lethal injection on Wednesday unless a court grants his lawyers’ motion for a new competency hearing, Texas Gov. Rick Perry calls for a stay of execution, or the state’s Board of Pardons and Parole recommends clemency and Perry grants it. Letters supporting clemency have come from a range of organizations including the American Psychiatric Association and American Bar Association, as well as numerous Christian leaders and former Texas Gov. Mark White. Panetti’s ex-wife Sonja Alvarado, the daughter of his victims, said in a 1999 affidavit, “I know now that Scott is mentally ill and should not be put to death.”

The judge and district attorney who set the execution date for Panetti have not responded to requests for comment from the media. Monroe, who is now a district attorney in neighboring Kerr County, speculates the new execution date was meant to force the case to some sort of resolution: “My guess is there is a feeling of, ‘Can we bring this to a close after all this time?’”