A black woman stood up to white police, and made history. 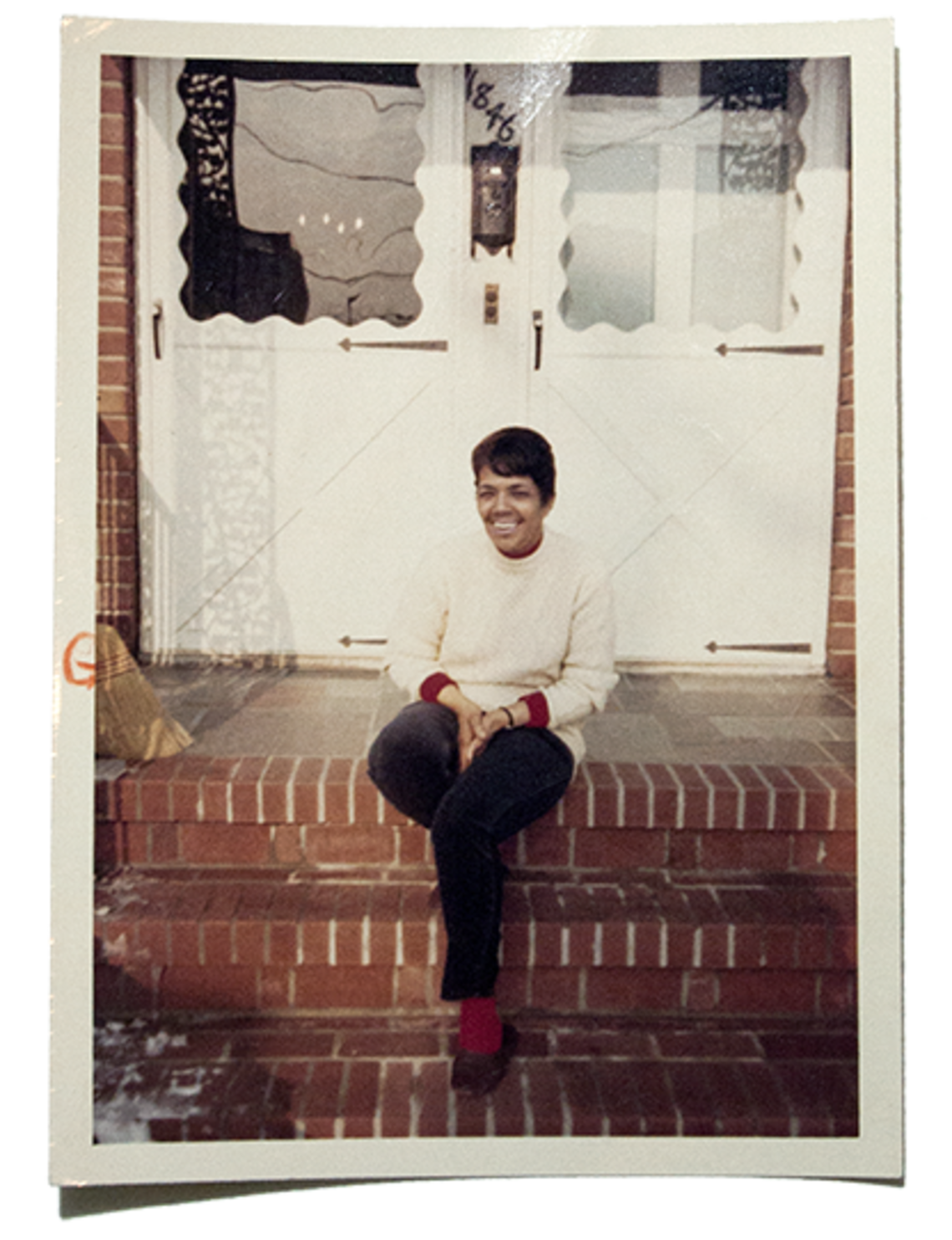 Dollree Mapp outside her home in Cambria Heights, New York in 1971. Courtesy of the Mapp family

Time is not always kind to the people whose names get attached to landmark legal cases. Ernesto Miranda, the defendant whose 1966 Supreme Court case forced police to inform suspects of their basic rights (“You have the right to remain silent…”) was stabbed to death in a skid-row bar. Clarence Gideon won a 1963 Supreme Court case, Gideon v. Wainwright, that established the right of poor defendants to court-appointed lawyers. When he died a decade later the former mayor of his hometown recalled him as a “no-good punk.” It fell to the American Civil Liberties Union to put a marker on his grave.

Before the Gideon ruling, before Miranda , there was Mapp v. Ohio, the 1961 Supreme Court decision some legal scholars credit with launching a “due process revolution” in American law. The Mapp ruling changed policing in America by requiring state courts to throw out evidence if it had been seized illegally. The woman behind the ruling, Dollree “Dolly” Mapp, died six weeks ago in a small town in Georgia, with virtually no notice paid. She was 91, as best we can tell.

Mapp’s life was as colorful and momentous as her death was quiet. She went from being a single teenage mother in Mississippi to associating with renowned boxers and racketeers in Cleveland to making her way in New York City, where she launched one business after another. “Some of them were legitimate, and some of them were whatever they were,” said her niece, Carolyn Mapp, who looked after her aunt in her final years. Along the way she tangled with police, and when she stood up to them in Cleveland – a black woman, staring down a phalanx of white officers in the 1950s – she made history.

Wayne LaFave, professor of law emeritus at the University of Illinois and a leading scholar on search and seizure, called her the “Rosa Parks of the Fourth Amendment.” From talking to Mapp’s family and friends, it’s clear that she wasn’t always easy to get along with. “She could be difficult, OK?” said Deidra Smith, a friend of about 40 years who adds: “She was brilliant and beautiful and bold.” It was Mapp’s boldness – “strong willed,” is how she’s described, time and again – that most defined and served her as she confronted illegal police tactics and draconian laws. Mapp was at her most determined “if you told her no. That just meant yes to her,” said Carolyn Mapp, who lives in Georgia. “She didn’t let go of anything.”

In 1957, Dollree Mapp, an African American woman then in her 30s, rented half of a two-family house in Cleveland, where she lived with her daughter. Although she had no criminal record, she had ties to Cleveland’s underworld. Mapp was divorced from Jimmy Bivins, a great boxer of the era who defeated eight world champions but never got a title fight. Mapp had accused Bivins of beating her – “I had to leave him or kill him, and I wasn’t ready to kill him,” she would later tell one author. (Bivins had accused Mapp of trying to destroy his career by feeding him fatty foods.) After the split Mapp had been briefly engaged to boxer Archie Moore, the light heavyweight champion. But they never married, and she later sued for breach of promise. 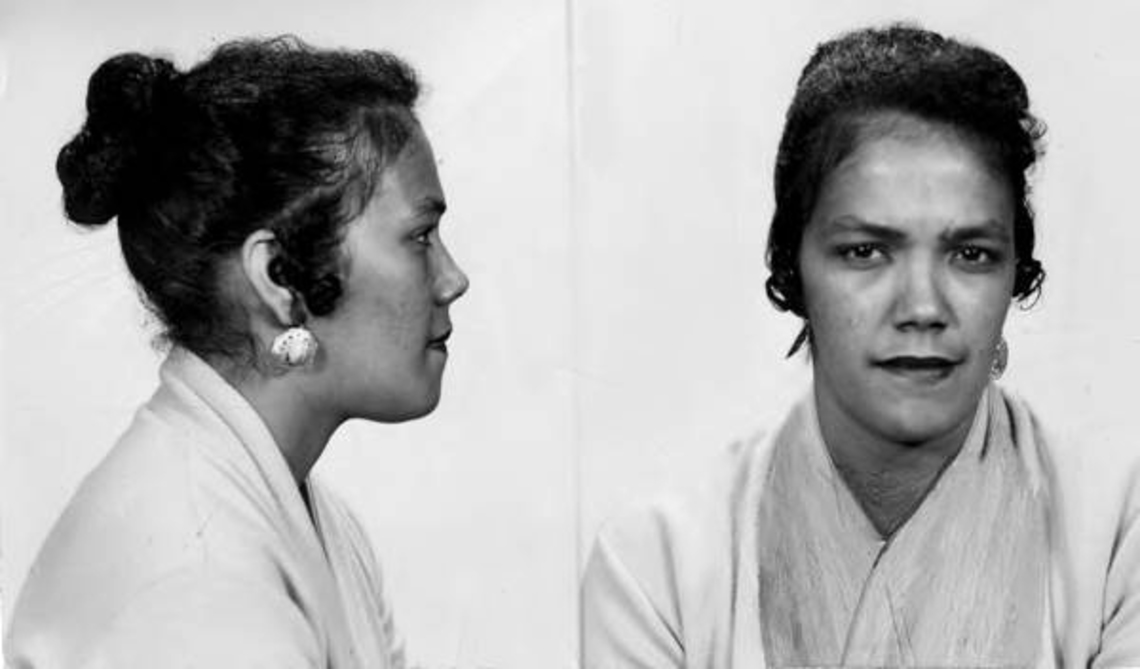 In May of that year, police were investigating a bombing at the house of Don King – a numbers racketeer who later became a famed boxing promoter – when they received a tip that a suspect might be hiding in Mapp’s home. Three officers showed up at Mapp’s place, demanding to be let in. Mapp refused. She called a lawyer, who advised her to relent only if police produced a warrant. Even then, the lawyer told her, she should make sure to read it. About three hours later, the police, now between 10 and 15 in number, pried a door to force their way in. A lieutenant, waving a piece of paper, said they had a warrant. Mapp asked to see it. The lieutenant told her no. So Mapp grabbed the paper from him and stuffed it down the front of her blouse. She would later testify to what happened next:

“What are we going to do now?” one of the officers asked.

“I’m going down after it,” a sergeant said.

“No, you are not,” Mapp told the sergeant.

But the sergeant “went down anyway,” grabbing the paper back and keeping Mapp from ever reading it. In years to come, she would say she suspected the paper was blank.

The police found the man they were looking for (although he was later cleared in the bombing). But the search didn’t end there. Led by the sergeant who had retrieved the dubious warrant – a man who would later say Mapp had “a swagger about her” – police searched every room, upstairs and down, rummaging through boxes and drawers. During this search they found a pencil sketch of a nude and four books considered obscene, with titles that included “Memoirs of a Hotel Man” and “Affairs of a Troubadour.” Mapp told police the materials belonged to a former roomer, for whom she had stored them. But she was charged under an Ohio law that made possession of obscene material a felony. At trial, Mapp testified that when an officer found the books, “I told him not to look at them, they might embarrass him.” The jury took 20 minutes to convict, after which Mapp was sentenced to up to seven years. 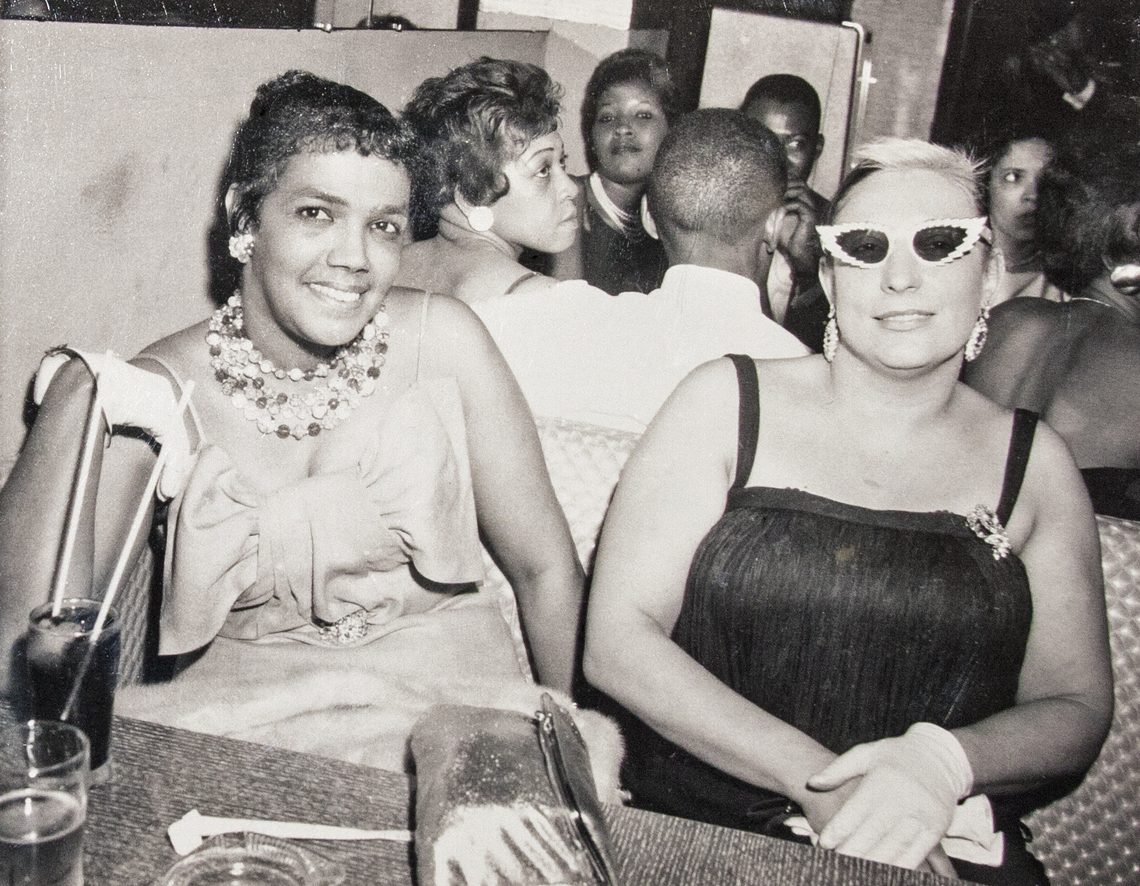 Courtesy of the Mapp family

Out on bond, Mapp appealed – first to the Ohio Supreme Court, where she lost, then to the U.S. Supreme Court, which agreed to hear her case. Oral argument can be a dry affair. But Mapp’s case was an exception. The justices drew laughs from the courtroom gallery while leaving no doubt how absurd they found Ohio’s obscenity statute. They took turns toying with the lawyer for the state, asking, if mere possession of obscene material constituted a crime, why the clerk of court had not been indicted, or the administrators at certain university libraries, or psychologists, or bibliophiles.

When Mapp’s attorney, Alexander L. Kearns, presented his case, he spoke with “all the bravado of a Clarence Darrow and the inflection of W.C. Fields,” according to one book. Here is an audio clip of Kearns describing a pivotal moment in the case.1

In their initial consideration of the case all nine justices agreed that the obscenity law violated the First Amendment. But when Associate Justice Tom C. Clark drafted the majority opinion, he shifted the focus of the case to the Fourth Amendment, which prohibits unreasonable search and seizure. By the time Mapp’s case reached the Supreme Court, it had become clear that the police never had obtained a warrant to search Mapp’s home. Lewis Katz, a law professor at Case Western Reserve University in Cleveland, would later write: “The illegal entry of Mapp's house by the police was nothing extraordinary; it was an everyday fact of life for blacks and other racial minorities. Police throughout America were part of the machinery of keeping blacks ‘in their place,’ ignoring constitutional guarantees against unreasonable arrests and searches and those that barred use of ‘third-degree’ tactics when questioning suspects.”

Ohio, like many states at the time, allowed evidence to be used even if it had been seized illegally. That turned the prohibition against unreasonable searches into a right without a remedy, making it hardly any right at all. In Mapp’s case, five Supreme Court justices decided to change that. They threw out Mapp’s conviction and declared that the rule excluding illegally obtained evidence would now apply in all the states – a judicial thunderclap that served notice of a court that would be reining in police in the years to come.

After her conviction was vacated, Mapp moved to Queens, New York. In 1971 police searched her home – this time, with a valid warrant – and found $150,000 worth of heroin and some stolen property. She was convicted of possession of drugs and, under new tough-on-crime laws signed by Gov. Nelson Rockefeller, received a mandatory sentence of 20 years to life. Mapp would later claim that the police had set her up due to her notoriety.

Mapp served time at the Bedford Hills Correctional Facility for Women, where she became friends with Deidra Smith, who was also serving a lengthy drug sentence. “Dollree walked with an air of royalty,” Smith said. She refused to eat in the prison cafeteria, because it reminded her of animals feeding at a trough. Instead, food was brought to Mapp by another inmate. Smith and Mapp helped organize opposition to the so-called Rockefeller Drug Laws, which were later rolled back, with many of the mandatory minimums eliminated, and Mapp, who did extensive research in the law library, helped other inmates with such issues as visitation rights. In 1980 Gov. Hugh Carey, no fan of the state’s unforgiving drug laws, commuted Mapp’s sentence, and she was paroled soon after. 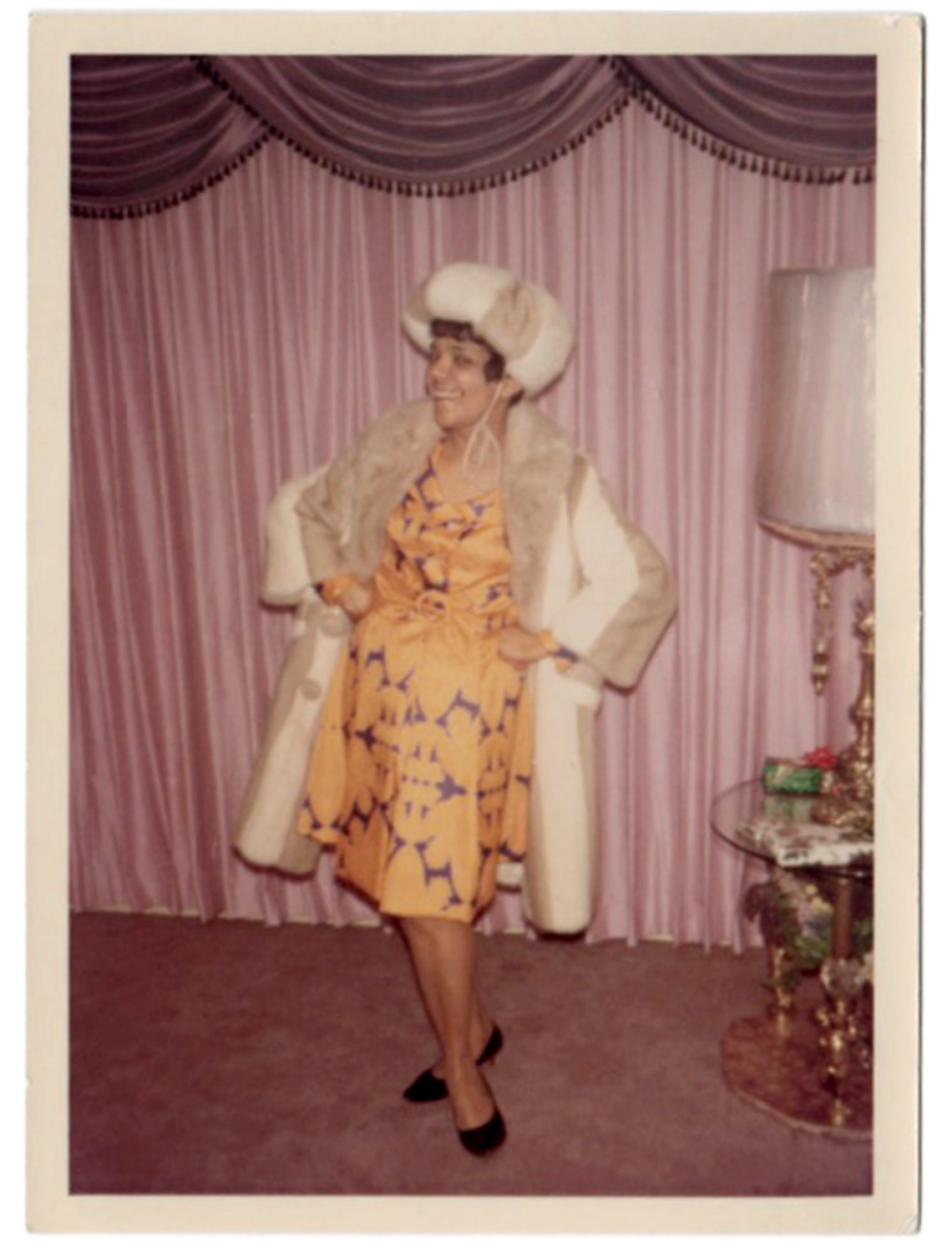 Dollree Mapp at home in an undated photograph.

courtesy of the Mapp family

After her release, Mapp worked for a non-profit that provided legal assistance to inmates. A talented seamstress and dressmaker, she also threw herself into a variety of businesses, from beauty supplies to furniture upholstery to real estate. She spoke at law schools about Mapp v. Ohio and was interviewed for several books. A 1987 book co-authored by Fred Friendly, former president of CBS News, said: “Dollree Mapp is still a handsome, verbal woman, who has all the charisma and body English of a knockout.” Priscilla Machado Zotti, a political science professor at the U.S. Naval Academy, called Mapp fond of “colorful tales, embellished with curse words and opinionated bravado.” Carolyn Long, a political science professor at Washington State University-Vancouver, interviewed Mapp when she was around 80. Mapp was steely and unapologetic, Long wrote in a book published in 2006; in a recent interview she added, “I’m not easily intimidated, but I was intimidated by her.”

The accounts of Mapp’s life are rife with conflicting information – on when she was born, where she was raised, and even the race of her parents. Mapp was, it is fair to say, an unreliable narrator: She told different writers different things. Tiffany Mapp, who was Dollree’s great niece and who became her legal guardian, said Dollree repeatedly shaved years off her age. All the inconsistent birth dates “gave me fits with Medicare,” her great-niece said. Mapp’s family said the correct story is this: Dollree was born on October 30, 1923; she was raised in Forest, Mississippi, one of seven children; her heritage was mostly a mix of African American and Native American; and Dollree left Mississippi for Cleveland after having a child as a teenager.

Mapp’s only child, Barbara, died in 2002. About the same time, Mapp began showing signs of dementia. She continued to drive a “big old [Ford] Expedition” into her late 80s, Carolyn Mapp said. Tiffany Mapp recalled, “My great aunt was very, very, very strong willed,” adding: “She didn’t prepare for death. I think Aunt Dolly thought she was going to live forever.” Dollree Mapp died October 31 in Conyers, Georgia. Her family plans to spread her ashes in the front yard of her home in Queens.