A new report details abuse of blind, deaf and disabled inmates in a Texas prison.

Floyd Blackburn recently included the following anecdote in a letter from his cell at the Estelle Unit, in Huntsville, Texas, to the Prison Justice League, a prisoner rights group in Austin: “One sergeant stuck his hand through the bars of my cell and hit me on the head and said, ‘What are you going to do blind man? I will beat your blind ass.’”

Blackburn, who is 62 and legally blind, has served seven of his 15 years for burglary at Estelle — one of Texas’ biggest prisons, with a population of more than 3,000 — where the Texas Department of Criminal Justice sends most of its oldest, sickest, and most impaired prisoners. 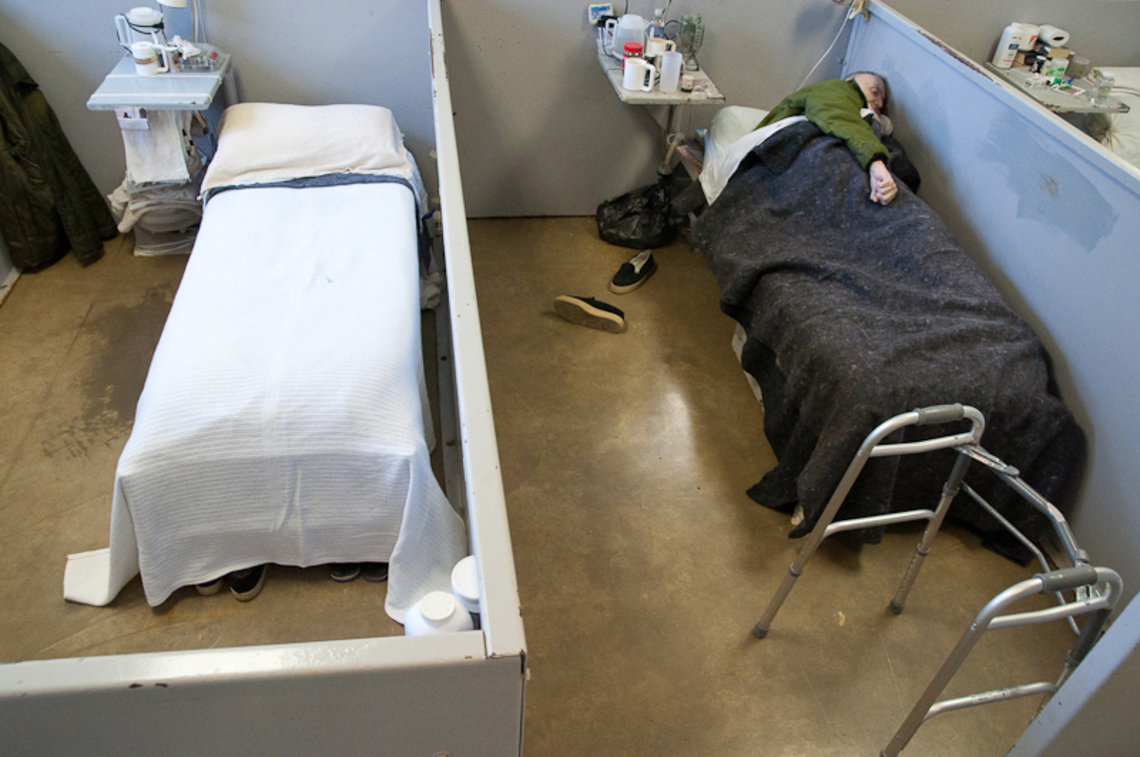 An inmate sleeps in his cubicle in the geriatric unit of the Estelle Prison in 2010.

His allegations are included in a report, released Monday, which joins several lawsuits against the prison agency, contending that correctional staff at the Estelle Unit regularly neglect, abuse, and even violently beat prisoners with disabilities, with little to no consequences.

For the last six months, Erica Gammill, director of the Prison Justice League, and Brian McGiverin, an attorney with the Texas Civil Rights Project, have been exchanging letters and talking to dozens of men at Estelle. “The letters describe violent physical assaults by staff against blind, deaf, and elderly prisoners, with a consistency that is deeply disturbing,” Gammill writes in the report. “These unprovoked assaults have led to serious injuries, including missing teeth, busted skulls, broken bones, ruptured eyeballs, and prolonged hospitalizations.” Many of the men told Gammill that they had faced violent retaliation for filing official grievances in the past, and that now they were too afraid to do so. The prison agency declined to comment on the report or the pending litigation.

The claims made in the report have been made before in other times and places, and they illuminate the issues of health and aging in prisons as longer sentences enacted in the 1980s and 1990s translate into a boom of older prisoners. Corrections officials are struggling to budget for medical care and geriatric services, while lawmakers have considered expanding parole for prisoners too old and sick to be dangerous in the outside world — and whose medical bills can be paid by family or federal programs.

The stories coming from the Estelle Unit suggest that cost is not the only problem; these men are particularly vulnerable to neglect and abuse from staff. The clearest examples concern blind inmates, as seen in McGiverin’s interviews:

“On holidays and weekend [sic], inmates are not allowed to use the handicap showers. On those days the handicapped must shower with the general population and fend for themselves. I never understood how a handicap magically disappears on weekends and holidays. Mine never does.”

“Officers who have assaulted inmates can prevent them from filing grievances. You have to file a grievance within 14 days of the assault, but officers sometimes take an inmate to pre-hearing lockup for 13.5 days, so they only have half a day to file a grievance. Then they don’t get the chance.”

According to McGiverin, the blind prisoners worry about bugs and spit in their food. They find their hygiene products confiscated with no explanation. Their canes are broken and hands get stuck when the guards don’t announce that doors are sliding open and shut. One man told McGiverin that the correctional officers “don’t understand human dignity.”

Some of the allegations go much further. Last June, a 54 year-old prisoner named Otis Talbert — who had been known for writing a lot of grievances and had assaulted officers in the past — was late to chow. An officer ordered Talbert back to his cell. Talbert jumped up in protest, and the officer punched him in the mouth with his keyring.

A month later, said Talbert’s sister Eva Gregory, five officers including the one from the chow hall, entered his cell with a heavy motor they’d ripped out of an industrial fan and pounded him with it. “We got a call [saying] he was beaten to death,” she recalled. “They said an inmate did it.”

Talbert was transferred to a hospital and pronounced “brain dead,” McGiverin wrote in a lawsuit against the prison agency. “For months, the doctors urged his family to take him off life support, saying he had no chance to recover, but they refused.”

Last month, Talbert woke up. He can now speak and read, but cannot move his body. He named several of the officers he said beat him up with the motor. None of them have been penalized. McGiverin believes that stories like this are “inevitable” given the “pervasive culture” of violence at Estelle.

For Lowry, the needed reforms are many, but they all have a common basis: money. “Prisons are not the most popular program to receive state funds, but are an essential part of keeping civilization civilized.”