A Most Unsurprising Riot

No one who has been to Willacy County Correctional Center or the other dozen private, for-profit “criminal alien requirement” prisons around the country could have been surprised by this weekend’s riot. As many as two-thirds of the men incarcerated at Willacy refused to participate in work details and then set fire to three of the ten housing tents, apparently in protest of poor conditions.

The Management & Training Corporation — the nation’s third-largest private prison company — houses most of the roughly 2,800 men at Willacy not in buildings, but in ten Kevlar tents that contain all but a few hundred of the prison’s approximately 3,000 beds. You get a cell only if you’re sent to solitary, which can happen for no reason other than that there are too many prisoners to fit in the tents (each tent is filled with about 200 closely-spaced bunks). 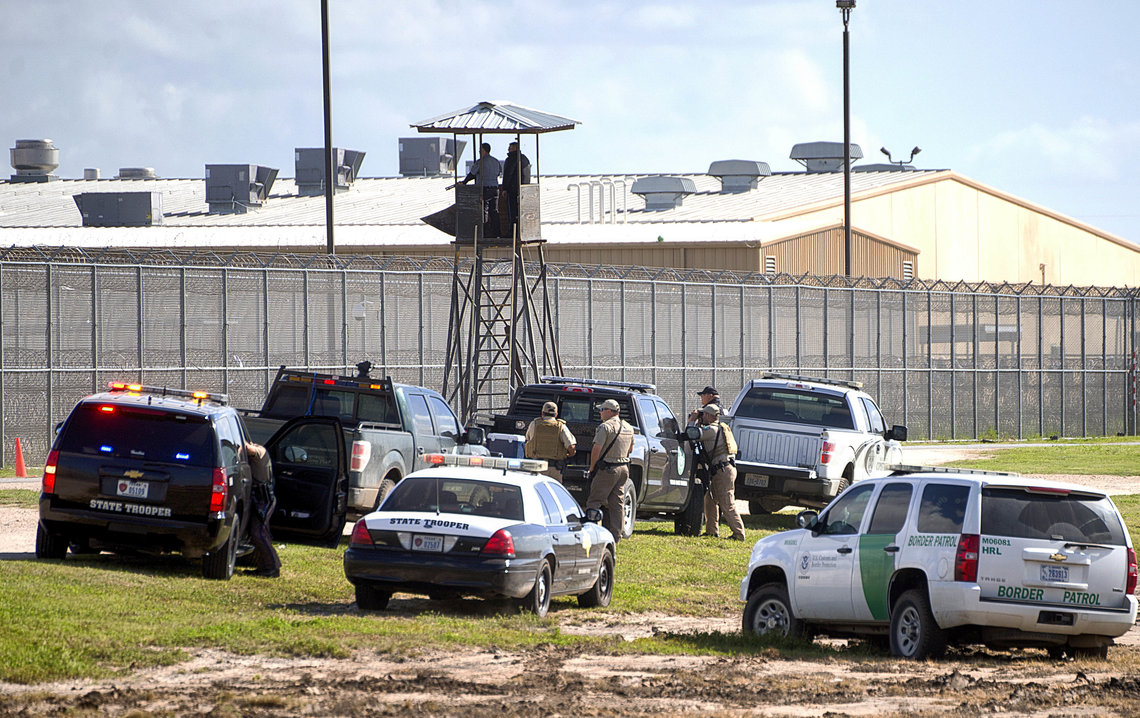 The CAR detention center, outsourced by the federal Bureau of Prisons, house low-custody (i.e., those whom the authorities consider generally well-behaved), non-U.S. citizens who are serving sentences for federal crimes. They essentially fall into two groups of people: immigrants serving time for drug offenses, and immigrants serving time for the felony of reentering the United States after they had previously been deported.

There are thirteen CAR prisons holding around 25,000 people nationwide, spread across Georgia, Mississippi, New Mexico, North Carolina, Oklahoma, Pennsylvania, and Texas. The amount of time people spend in the facilities varies widely depending on why they landed there. Sentences for illegally reentering the United States average around 18 months. Thanks to mandatory minimums, prisoners serving sentences for drug offenses can spend decades in a CAR prison.

In 2013, I visited Willacy to interview prisoners as a part of the ACLU’s report on the five CAR prisons in Texas. The 2014 report was based on nearly five years of interviews and document review. We found that men held in these private prisons are subjected to shocking abuse and mistreatment, including getting thrown into isolation cells for complaining about bad food and poor medical care, being denied both urgent and routine medical care, and being cut off from contact with their families. Bureau of Prisons policies also exclude immigrants from many types of rehabilitative programs — schooling, vocational training, and the like.

At Willacy, the men we spoke to described squalid and overcrowded conditions in the prison’s tents, with insects crawling into their bunks and malfunctioning toilets constantly backing sewage water into the living areas. When people protested to get the toilets fixed, the protest leaders were locked in isolation cells.

The Bureau of Prisons’ contracts with private prison companies have contributed to such circumstances by exempting the companies from complying with most bureau policies, creating financial incentives to overcrowd the facilities up to 115 percent of the originally contracted capacity, and setting perverse incentives to overuse solitary cells. For the last decade, the contracts have had a quota requiring at least 10 percent of the prison to be devoted to isolated confinement, which is nearly double the percentage of prisoners kept in isolated confinement at facilities managed by the Bureau of Prisons. (Last summer the bureau reduced the quota to 5 percent.) The social media comments from Management & Training Corporation guards and former guards suggest that a toxic corporate culture may also be to blame.

MTC built Willacy in 2006 as an Immigration and Customs Enforcement (ICE) detention facility to hold people in civil deportation proceedings. Following widespread condemnation by nonprofit organizations and a Frontline report about sexual abuse at Willacy that included multiple allegations of guards forcing themselves on detained women, ICE ended its contract. But barely a month after the last detainees left, MTC announced that it had signed a new, $532-million contract with the Bureau of Prisons to reopen as a CAR prison.

CAR prisons didn’t exist before 1999, but the program has grown rapidly as the lines between immigration enforcement and the federal criminal justice system have grown increasingly blurred. Traditionally, federal authorities handled immigration cases through the comprehensive enforcement scheme available under civil immigration laws. In the past decade, however, new federal policies demanding aggressive use of the criminal justice system for immigration enforcement have caused the number of criminal prosecutions for unlawful border crossing to skyrocket. The tipping point came in 2009 when, for the first time, more people went to federal prison for immigration offenses than for violent, weapons, and property offenses combined. Between October 2012 to September 2013, more than half of all federal criminal prosecutions initiated nationwide were for illegally entering or reentering the United States.

If ICE’s civil detention system is closed to outsiders and too often evades sunlight, then the CAR prisons exist entirely in the shadows. Although the isolated locations of ICE detention facilities often make it difficult for attorneys and family members to meet with detainees, the situation is far worse at CAR prisons. At one, the warden denied the ACLU’s request for attorney visitation with a curt letter demanding to know why our meetings with prisoners “might be appropriate” and asserting that the Bureau of Prisons’ policies allowing confidential attorney visits “do not apply at this facility.” (His intransigence was rewarded; later that year, the warden was promoted to a managing director position at his private prison company.)

When we were able to interview prisoners, they described not only abuse and mistreatment, but a system that made it difficult or impossible for them to even complain about their mistreatment. Grievance systems often allowed no appeals above the private prison warden. Some staff refused to accept grievance forms written in Spanish — a particularly effective way of quashing grievances for a population of largely Latino immigrants. Many prisoners reported that they were threatened with solitary confinement — and in some cases, actually thrown in isolation cells—for assisting others with drafting grievances or filing lawsuits.

And the Bureau of Prisons’ oversight mechanisms offer little protection. In one case, the agency renewed a private prison contract even after its own monitors noted that the prison was “unable to successfully achieve their own plans of action to correct deficient areas.” The conclusion: “Lack of healthcare has greatly impacted inmate health and wellbeing.” Since then, the ACLU has continued to receive reports of medical understaffing, the spread of contagious diseases, policies that obstruct access to medical care, and even deaths at this prison.

As Martin Luther King, Jr. observed in a different context, “a riot is the language of the unheard.” Willacy is the third CAR prison to experience a major uprising in the past several years. In 2009, prisoners at a CAR prison in Pecos, Texas, took guards hostage and set fire to the prison to protest the death of Jesus Manuel Galindo, who died from a seizure while in solitary confinement. In 2012, prisoners at a CAR prison in Natchez, Mississippi, rioted and killed one guard after their protest of bad food, poor medical care, and mistreatment by staff spiraled out of control.

The same perverse incentives to cut corners, and the same silencing of prisoners, exist at each CAR prison; any one of them could be the site of the next major uprising.

Carl Takei is a Staff Attorney with the ACLU’s National Prison Project. He is the coauthor with the ACLU of Texas of the report on Texas’s CAR prisons, Warehoused and Forgotten: Immigrants Trapped in Our Shadow Private Prison System.

This story has been corrected to update the current quota of the prison required to be devoted to isolated confinement.