The Missed Opportunity of Robert Woodson

It has become common in narratives of the prison boom to see blacks as mostly absent from crime politics, passive victims of an overreaching criminal justice system, or as contributing to the vilification of their own by supporting the drug war, the Rockefeller drug laws, and calls for a greater police presence in minority neighborhoods.

Michelle Alexander, in “The New Jim Crow,” suggested that many black leaders and rights groups, so vocal on a range of issues affecting their community, had maintained an “awkward silence” around crime and punishment. Why, on the heels of one of the most transformative revolutions to secure citizenship, in the heat of black activism, did blacks not challenge and resist the tremendous expansion in punishment and the practices that led to it? Why did they not check the growth of racialized policing and confinement when they had the chance?

The charges of black passivity are not so much wrong as incomplete.

They overlook, among other moments, a brief but insistent movement in the 1970s for community crime control led by Robert Woodson — a black conservative who later worked for the American Enterprise Institute and Reagan Administration’s Council for a Black Economic Agenda — and his allies in Congress. 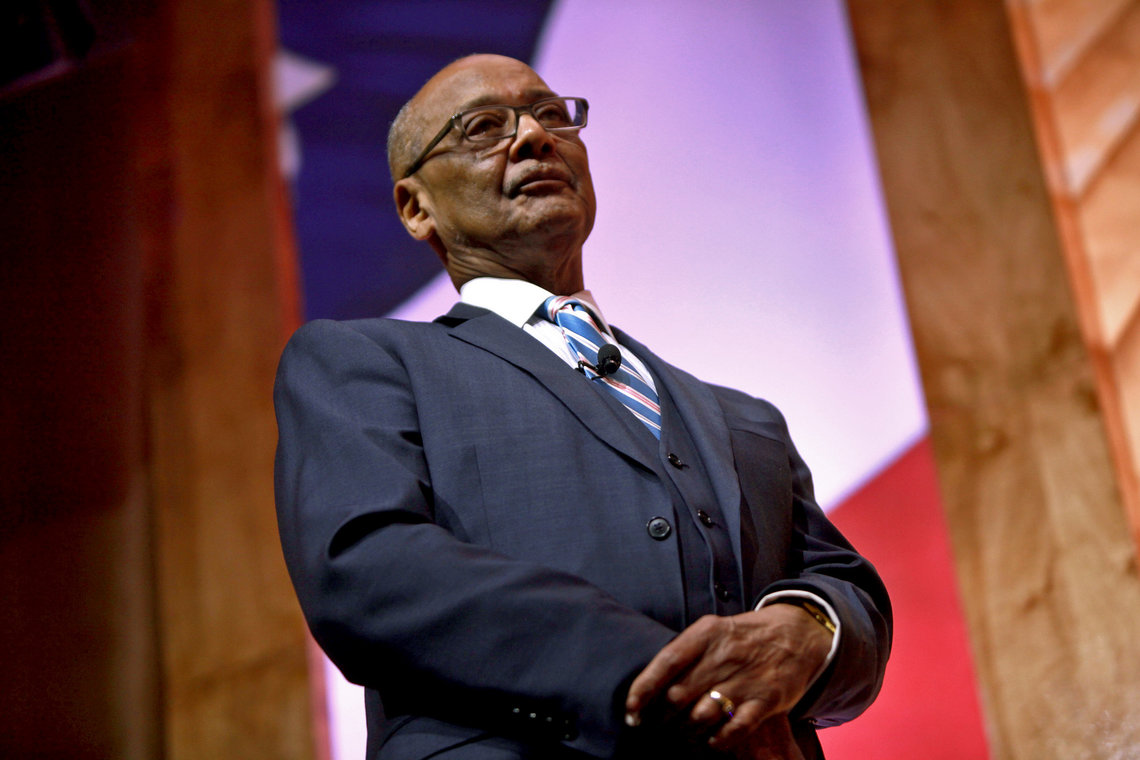 Woodson mounted a crusade that was about both protecting minorities from violence and empowering the black community, a movement that tried and ultimately failed to reimagine the civil-rights ambition and move beyond its focus on protections from discrimination to community agency and power. Failed campaigns are often wiped from history. Yet, the movement for community crime control could have set the nation on a path away from the mass incarceration that has arguably been the largest intervention into black life since the civil-rights movement.

Woodson grew up in poverty in a Philadelphia neighborhood where gang crime had flourished. As he explained during a 1981 congressional hearing, his own brother had “met violent death on the streets,” and early in adolescence, his best friend was stabbed to death “on the steps of Shoemaker Junior High School.” Woodson has told me that he had dropped out of high school and had an “appreciation for why kids travel with gangs.”

He began directing the Administration of Justice division at the National Urban League in the 1970s and started developing a program for dealing with crime. Woodson’s plan was based on a simple idea: “Those close to or experiencing the problem should play a primary role in its solution.”

During this era, many leaders were arguing for solving the “root causes of crime” and for greater representation of blacks in police agencies. Woodson, in contrast, believed that it wasn’t enough to better the conditions of minority neighborhoods; he sought to strengthen the community institutions in those places. He rejected the then-popular notion of disorderly communities riddled with pathologies of a weak family structure. In high-crime areas, such as Woodson’s neighborhood, there were a disproportionate share of offenders, but there were also mediating structures (churches, community organizations, families) that he believed should be mobilized to curtail crime.

Woodson had worked extensively with some of these groups. One was the House of Umoja in Philadelphia, created by the parents of Rep. Chaka Fattah (D-Pa.), who had invited members of rival gangs into their home to give them the same emotional and material security they sought in gangs. Umoja was serving 400 boys from 73 different gangs, and gang-related deaths had fallen from 40 a year to just one in 1978. Another group was the Community Assistance Project in Chester, Pennsylvania that maintained a community dispute resolution program and a community property bank to post bail for people sitting in jail.

There were many other sites of black activism that embodied community control over crime: the Woodlawn Association in the South and west side of Chicago, for example, which trained and operated its own community security patrol; the Citizens Action for a Safer Harlem, which recruited and trained a thousand community volunteers to clean up Harlem’s narcotics highway; the Coalition of Concerned Women in the War on Crime in Chicago, led by Chicago Defender columnist Ethel Payne; and the Black United Front in Washington, DC that wanted community control of the police. They fought for the security of blacks but also against the idea that their communities couldn’t be trusted to handle the crimes thereby forming disarmament committees, black citizens patrols, and turning empty storefronts into street academies to prevent black youth dropouts from becoming easy recruits into drug markets.

Woodson took his message to Congress in 1973, motivated by a concern that these grassroots groups were being overlooked and that the newly formed Law Enforcement Assistance Administration (LEAA) would feed agencies that put the expansion of their bureaucracies ahead of making the streets of his community safe. The majority of LEAA grants in the first few years went to state and local police agencies, mostly for manpower and hardware, including a riot tank in Birmingham named “Big Bertha.” As the Nation explained in 1970, “The result is that reform of the criminal justice system has become the responsibility of persons with institutional loyalties to the existing system.”

With the backing of Vernon Jordan, the head of the Urban League in those years, Woodson soon found another supporter: Representative John Conyers, chair of the subcommittee on crime in the Judiciary Committee. Conyers argued to his subcommittee that vesting more and more power in criminal justice agencies was not the solution to crime; a better approach was empowering the community’s informal controls. He invited Woodson to testify several times and in 1973 proposed the Community Anticrime Assistance Act, which would have given more of the LEAA money directly to nonprofits for community crime prevention. Conyers promoted the measure for years, without success.

At the time, only one percent of the federal windfall went to community-based programs. The Republican leader on his subcommittee was against Conyers’ bill because it “seems directed to programs which involve disadvantaged persons and minority groups.” Liberals like New York Mayor John Lindsay turned their backs on Conyers saying that, in Lindsay’s words, “any broadscale direct funding of neighborhood groups… could lead to a problem of vigilantism.”

Woodson and Conyers by now had the backing of the Congressional Black Caucus. They continued the fight for community crime control to no avail.

By the end of the decade, Ron Brown, commerce secretary in the Clinton administration, charged that the nation’s crime-fighting agency – the LEAA – refused to support “the efforts of minority communities to protect themselves.” Brown, Woodson, Senator Barbara Jordan, and other black leaders became very concerned with the civil rights record of the LEAA, which had refused to terminate the flow of federal funds to police agencies that were actively discriminating against blacks. (The states of Mississippi and Alabama still prohibited hiring blacks in the state police.)

Moreover, most blacks employed in the agency were janitors and clerks, and no blacks were in key positions making decisions about who received grants or what programs they would fund. Most importantly, though, was their growing concern that the agency systematically denied funds to black community groups and programs, bypassing groups like the House of Umoja and going instead to national groups without community ties, like the International Association of Chiefs of Police, the National District Attorneys Association, and American Correctional Association.

Woodson charged that LEAA had practiced a “bait-and-switch game in that they use statistics on urban minority young people to justify appropriations and, when that money is appropriated and spent, it is spent on organizations which do not traditionally serve those communities or constituencies.” Calling it a “cruel hoax,” he detailed how in 1978, the nation’s juvenile delinquency program had funded 153 programs, only seven of which were minority organizations serving minority youth.

Worse, the programs funded were often harmful to the black community. One of the largest recipients of the LEAA grants had received $2 million over three years for a community crime-prevention program that was designed without the community’s input. Their plan to reduce crime? Build a fence around the minority area and change traffic flow away from black merchants in the area.

Vernon Jordan wrote a letter to the attorney general about the Urban League’s frustrated attempts to secure funding for their anticrime programs. According to archival records of those meetings, the group would meet with LEAA administrators, be promised funds, and then receive rejections.

Conyers doggedly tried to wrest some funding back towards community groups in low-income black neighborhoods in leading the 1976 reauthorization of the LEAA, which created the Office of Community Anti-Crime Programs and mandated community representation. But the LEAA ignored the legislation: A year after the order, no office of community anticrime programs was set up, no staff assigned to it, and according to Conyers, “not one penny of that money has gone to a deserving group or any group for that matter.” Worse, the LEAA wrote guidelines that community groups accessing funds had to first get police approval.

By 1980, years before the war on drugs commenced, black leaders argued that the LEAA should be scrapped entirely, having “supported repressive police action in the black community.” The Urban League wrote that LEAA monies had gone to programs to create “special tactical patrols, special equipment, such as helicopters, surveillance and photography equipment, riot tanks, focused in an often abusive manner into the minority community, while other minority communities received little or no protection.”

In contrast to their community approach, Woodson likened the nation’s war on crime to “seeing a fire and then proceeding to build a firehouse instead of getting water to put out the fire.”

That firehouse turned out to be one of our nation’s grandest policy experiments, one that most now agree was a failure. Over the decade and a half of the LEAA’s existence, more than six thousand new criminal justice agencies were fashioned; nationally, police forces doubled, correctional employees tripled, and spending on police increased by a factor of eight. By the end of the 1970s, black arrests had quadrupled after declining for eight years in the 1960s, incarceration began its historic rise, doubling in a decade. The counties that received the most LEAA money showed the largest increases in arrests over the decade, even after accounting for what crime rates would have predicted.

Even though Woodson’s campaign lasted less than a decade, it would be a mistake to overlook its import. The failure to entertain this alternative had immense consequences. It excluded those most victimized by crime from contributing solutions. Woodson and Conyers had presented a vision that recognized that solving crime was not just a matter of reforming (or incarcerating) individuals but relied on collective action in high-crime communities. Woodson’s failed movement demonstrates that the black political agenda during this era was not solely a push for rights and protection from discrimination. The problem, Woodson reminds us, is not that blacks failed to enlist in the crime war, but that they were turned away.

The 1970s crime debate was basically a contest between informal and formal social control. Though the latter ultimately won out, leading the vision for most of the next three decades, it is the former — the vision of Woodson and Conyers and Brown — that is now suddenly in vogue. Community policing, drug courts, treating minor disputes within the community, and justice reinvestments are now hailed as the answers for communities where crime is high, and the way to reduce the human costs of mass incarceration. Four decades on, we may discover that Robert Woodson was right after all.