In a major turn in one of the country's most-noted death penalty cases, the State Bar of Texas has filed a formal accusation of misconduct against the county prosecutor who convicted Cameron Todd Willingham, a Texas man executed in 2004 for the arson murder of his three young daughters. 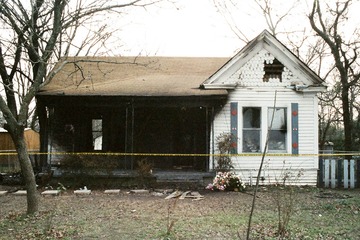 Read our initial investigation of the Cameron Todd Willingham case.

"Before, during, and after the 1992 trial, [Jackson] knew of the existence of evidence that tended to negate the guilt of Willingham and failed to disclose that evidence to defense counsel," the bar investigators charged.

This story was produced in collaboration with The Washington Post.

The bar action was filed March 5 without any public announcement. It accuses Jackson of having intervened repeatedly to help a jailhouse informant, Johnny E. Webb, in return for his testimony that Willingham confessed the murders to him while they were both jailed in Corsicana, the Navarro county seat.

Webb has since recanted that testimony. In a series of recent interviews, he told The Marshall Project that Jackson coerced him to lie, threatening a long prison term for a robbery Webb had committed but promising to reduce his sentence if he testified against Willingham.

Jackson has repeatedly denied that he made any pre-trial agreement with Webb in exchange for his testimony. The former prosecutor acknowledged that he and others made extraordinary efforts to help Webb, but said they were motivated only by concern for a witness who had been threatened by other prisoners because of his testimony.

A lawyer for Jackson, Joseph E. Byrne, on Wednesday urged that people withhold judgment about the case until all the evidence was presented and took issue with the grievance filed against his client by the Innocence Project, a legal advocacy group.

"I disagree with much of the information that was put together by the Innocence Project and do not find it to be objective," Byrne said.

From the time of the house fire that killed his children on Dec. 23, 1991, Willingham maintained his innocence. He said he awoke from a nap to find his home engulfed in smoke and flames, and that he could not locate the three toddlers before stumbling outside to seek help. Texas fire examiners concluded that the blaze was an arson, and Jackson later said it was "very likely" that Willingham had poured some accelerant on the floor in the shape of a pentagram, apparently as a symbol of Satanic worship.

Willingham was executed on Feb. 17, 2004, after Gov. Rick Perry refused to grant a stay requested by Willingham's lawyers on the basis of a report by an independent arson expert who concluded there was no evidence the fire was intentionally set.

Five years later, Perry also replaced several members of a Texas state forensic commission that was reviewing the finding of arson. The commission subsequently avoided concluding whether investigators in the Willingham case had been negligent or committed misconduct. At the time, Perry called Willingham "a monster."

Relatives and supporters of Willingham have long sought his vindication but have been frustrated by both the courts and the state government. The Innocence Project, which has investigated the case for a decade, sought a posthumous pardon for Willingham and to have his case re-heard by a court of inquiry. Both efforts were unsuccessful.

In July, the group filed a grievance with the Texas bar accusing Jackson of conduct that "violated his professional, ethical and constitutional obligations" in his handling of the case. That complaint was the basis for the disciplinary petition filed on March 5.

Told of the state bar's action, Willingham's stepmother, Eugenia, said, "John Jackson committed a crime, and I want him punished. Who would have ever thought that all this corruption would happen in small-town America? If the appeals court had known the truth, Todd would probably be alive today."

A staff attorney for the Innocence Project, Bryce Benjet, said the group was encouraged by the bar's disciplinary action. "Withholding exculpatory evidence and the presentation of false testimony in a death penalty case is quite possibly the most serious ethical breach for a lawyer you can imagine," he said. "The bar is correct in seeking accountability where a prosecutor has clearly abused the public's trust, and that misconduct resulted in the execution of an innocent man."

Byrne, Jackson's lawyer, said last week that his client would ask to have a jury hear any accusations of misconduct against him, as state bar rules allow. A spokeswoman for the bar said the state supreme court has already appointed a district court judge from Harris County, David D. Farr, to preside over the disciplinary case in Navarro County. Whether a jury will be chosen from the citizens of the county, where Jackson also served as a judge before going into private practice, was unclear.

The disciplinary petition contends that "Jackson failed to make timely disclosure to the defense details for favorable treatment for Webb, an inmate, in exchange for Webb's testimony at trial for the State.

"During a pre-trial hearing on July 24, 1992, (Jackson) told the trial court that he had no evidence favorable to Willingham," the complaint continues. "That statement was false."

The Marshall Project disclosed earlier this month the existence of a letter sent by Webb to Jackson in 1996 asking Jackson to comply with what he called their "agreement" to reduce his judgment from aggravated robbery to robbery. Within a few weeks, Jackson obtained a court order that reduced the charge.

The petition accuses Jackson of obtaining favorable treatment for Webb that included telling the Navarro County Clerk's Office to inform the Texas Department of Corrections that Webb was convicted of robbery instead of aggravated robbery even though Webb had pled guilty to aggravated robbery. In addition, Jackson obtained the court order in 1996 that officially changed the judgment to robbery and requested early parole for Webb with the Texas Board of Pardons and Paroles.

When early parole was denied, Jackson signed court orders for Webb so that he could be transferred from prison to the Navarro County Jail.

The petition accuses Jackson of violating several sections of the Texas Disciplinary Rules of Professional Conduct and seeks that he "be disciplined as the facts shall warrant." Such discipline could range from no discipline to disbarment.

Jackson is accused of violating rules that prohibit making false statements to a judge as well as obstructing justice. The petition also accuses Jackson of concealing evidence that "a lawyer would reasonably believe has potential or actual evidentiary value."

Webb's testimony will likely be a key part of the state bar's case against Jackson, as well as letters between Webb and Charles Pearce, a now-deceased Corsicana rancher who funneled several thousand dollars to Webb after the Willingham trial. Webb has said the money was promised to him as part of his agreement with Jackson.

No date for any hearing on the petition has been scheduled.

The disciplinary case against Jackson is the third recent one in Texas in which prosecutors have been accused of concealing evidence, making false statements and obstructing justice.

In 2013, Williamson County District Judge Ken Anderson resigned as a judge and a lawyer and pled no contest to a contempt of court charge for failing to disclose evidence of innocence in the case of Michael Morton, who was exonerated after being wrongly convicted and serving 25 years in prison for the murder of his wife. Anderson was sentenced to 10 days in jail and was released after five days because of good behavior.

In 2014, the State Bar instituted a disciplinary complaint against Charles Sebesta, prosecutor of Anthony Graves, who was exonerated from death row in Texas in 2010. The complaint, which is being handled privately - as is the choice of the attorney accused - alleged that Sebesta withheld evidence of Graves's innocence and used perjured testimony to obtain Graves's conviction.