How some inmates hack, rewire, and retool their radios to create walkie-talkies.

By Maurice Chammah
The Lowdown breaks down the rituals and routines of the criminal justice system.

Prisoners face numerous restrictions when communicating with one another or the outside world. But where there is a rule, there is often a workaround. At Pelican Bay State Prison in Northern California, inmates have yelled to one another through drainpipes under their cells; inmates in Texas talk through cans connected with twine; and in facilities throughout the country, little paper notes — known as “kites” — are literally handed off. As technology has developed, so have the communication methods; cell phones and iPods are regularly smuggled to inmates by visitors and guards. And occasionally, the technology is already inside the prison. Some inmates have learned how to transform their radios into devices that allow them to talk to each other and even eavesdrop on guards. 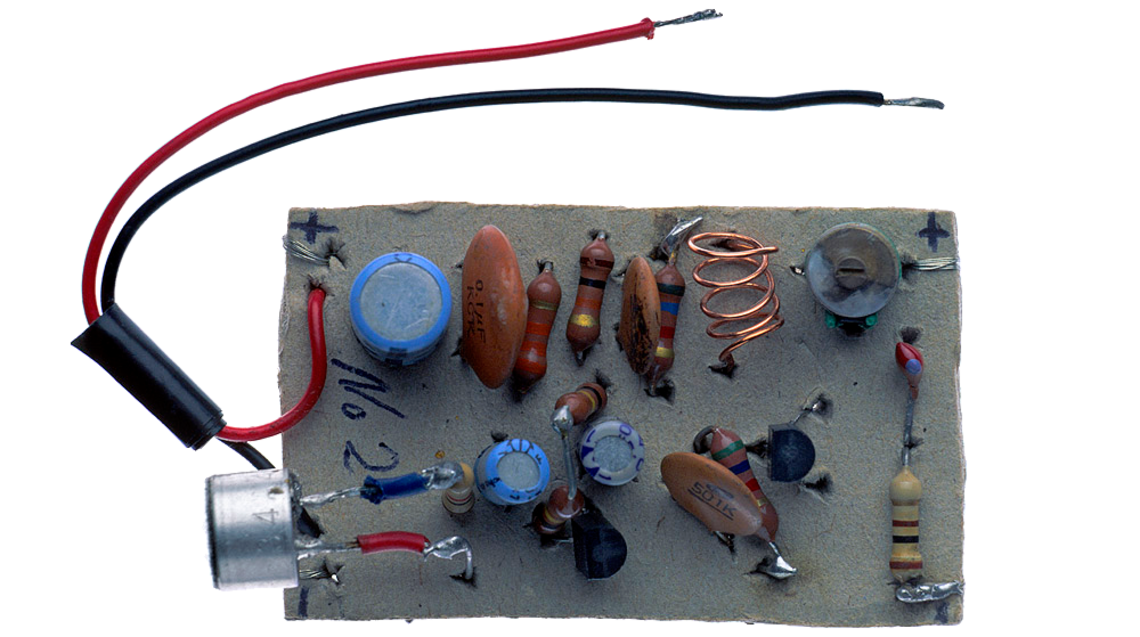 A transmitter made of radio parts by an inmate at Wolfenbüttel prison in Germany.

Marc Steinmetz Photography
The Making of a Walkie-Talkie

Once an inmate has purchased an analog radio from the prison commissary (they usually cost less than $30), he can open it up and pull apart a coil, which changes the range of frequency that the radio can access. All the inmate needs to do next is find the frequency that the staff uses on their walkie-talkies. Modifying a radio for two-way communication requires reversing an electrical current to turn a speaker into a microphone. As Ruth Massingill and Ardyth Broadrick wrote in their 2007 book, Prison City, about prison conditions in Huntsville, Texas, “Transforming a radio into a vocal transmitter-receiver requires only a basic knowledge of electronics, a skill readily found within prisons.”

In 1976, John Draper, known among hackers as Captain Crunch, was incarcerated at a low security federal prison in Lompoc, California (for phone fraud, incidentally). Upon arrival, he bought a radio from the commissary and re-wired it in the electrical shop so that he could hear walkie-talkie chatter among guards. Because the guards were required to report their movements, Draper was able to know when the coast was clear for other activities — like teaching other prisoners how to modify their own radios. Nobody, as far as Draper knows, was ever caught. “The guards are so clueless,” he says.

That’s less the case today. A correctional officer at the Goree Unit, near Huntsville, Texas, who asked not to be named said staff recently sent a prisoner to solitary confinement after they found that his radio had been doctored. “He could hear our radios and he could transmit out,” she says.

In February, Pennsylvania Corrections Secretary John Wetzel told lawmakers that inmates listening to guard chatter with their radios had become a security problem. Correctional officers in Texas have described similar issues. “If they know there’s trouble on the other side of the prison, they can set a fire on this side,” says Lance Lowry, head of the Texas prison employee union. But illicit communication in prison is not always used for illicit activities. Converted radios have allowed some Texas death-row prisoners to converse collectively on a party line. “We listened to sports and music together, shared our deepest thoughts, darkest fears and all of the good and bad times of our lives,” wrote Robert Pruett, who has been on death row since he was convicted in 2002 of murdering a prison guard. In an autobiography published online, Pruett described a game called Death Row Idol, in which the inmates “can either sing a song, tell a joke, or perform some sort of skit to entertain the rest of the section.” The rest of the inmates cast votes “to see who would be voted off of the gurney.”

A History of Techie Contraband

In the late 1990s, the photographer Marc Steinmetz asked several German prisons if he could document contraband they had confiscated over the years. Among the objects they gave him, he found a bug built of radio parts that had been placed in a room where guards meet, so that inmates could listen to their conversations and be prepared for cell searches. He also photographed an encyclopedia from the 1970s with a rectangle of paper sliced out of the middle; a radio receiver had been placed inside. A large black arrow was drawn into the book, pointing to the on/off switch.