What to Read on the Boston Bombing Trial

In time for closing arguments, ten pieces to catch you up.

The Boston Marathon bombing trial reaches its decisive moment this week. Closing arguments will take place Monday, jury deliberations should be well underway by Tuesday, and we could see a verdict as early as Wednesday or Thursday since the government’s case was so powerful and Dzhokhar Tsarnaev’s attorneys conceded his culpability during opening statements. The defendant did not testify on his own behalf and it is almost inconceivable that he will be acquitted on all of the most serious charges against him — the charges for which the Justice Department is seeking the death penalty.

If Tsarnaev is convicted it means the terrorism trial would enter its penalty phase as early as Friday, just days before the second anniversary of the bombing. During this phase federal prosecutors will present evidence of “aggravating” circumstances to try to convince jurors to recommend a death sentence. Defense attorneys will present “mitigating” evidence as they seek to convince at least one juror to spare their client’s life. This is where the jurors, at last, will see a truly contested fight in court, for Tsarnaev’s lawyers have said for months that their strategy is to seek mercy from the panel by arguing that their infamous client, the Rolling Stone cover boy, is less culpable than his older brother, Tamerlan, who was killed in the final assault on the brothers. 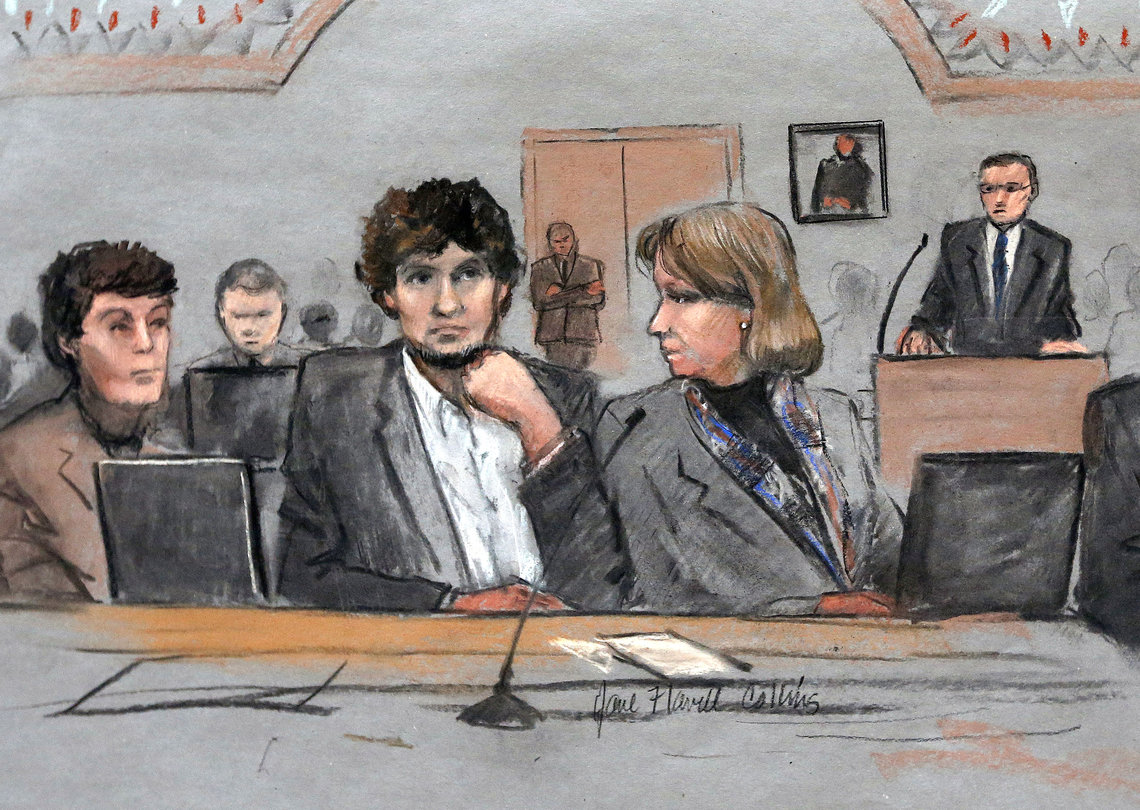 If you haven’t been paying attention to the daily drip of news from the trial — like most trials there have been dramatic moments intermixed with moments of tedium — we’ve got you covered. Below are ten works of journalism to help you understand the trial, the actors, the law, and the circumstances that brought everyone together for months inside a Boston courtroom not far from the traditional finish line of the Marathon. Why are many in and around Boston relieved that the pace of the trial has quickened after a slow start marked by repeated venue-change requests? Because there now is a chance it could all be over before Monday, April 20th, Patriots’ Day, the day the next Marathon will be run.

The Letter. Bombing survivor Rebekah Gregory, who lost a leg in the attack, wrote a searing open letter to Tsarnaev on Facebook. The letter went viral but there is no way to tell if its target ever has seen it. (CBS Boston)

The Manhunt. A report issued last Friday commends the police for their work during the initial stages of the 2013 investigation — but also finds that many officers subsequently acted “recklessly” and were deployed by supervisors in a “chaotic” fashion. (Boston Herald)

The Prosecutors. Mixing emotional testimony from survivors with legwork from federal investigators, government attorneys presented a strong case against a capital defendant whose attorneys do not dispute much of the evidence. (WGBH-TV)

The Defense. The Tsarnaev defense team is led by Judith Clarke, a unique capital defense attorney with a long history of passionate work on behalf of some of the most despised clients of our time. (Vanity Fair)

The Victims. “Her Decision, Their Life,” is a long, moving account of the life and times of Jessica and Patrick Downes, a couple forever changed by the bombing. (Boston Globe)

The Doctor. Dr. Stephen Odom concedes he was anxious when he found out he might be treating the suspected Boston Marathon bomber when he was first brought to the hospital after his capture. Dr. Odom shared his account of that memorable day at Beth Israel Deaconess Medical Center with TMP’s Beth Schwartzapfel. (The Marshall Project)

The Father. Few who were in the courtroom will ever forget the day that Bill Richard, the grieving father of the bombing’s youngest victim, took the witness stand. (Boston Globe)

The Brothers. Both the prosecution and the defense appear to agree upon one thing — at the core of the bombing were two brothers who shared an intricate relationship. (Christian Science Monitor)

Lost in Translation. The government’s case against Tsarnaev was powerful — except when it came to translating some of the Russian-language phrases and texts the feds claim as evidence of the defendant’s radicalization. (Washington Post)

The Mind of the Defendant. Tsarnaev was 19 on the day of the bombing — an adult in the eyes of the law but still a developing adolescent in the eyes of science. TMP’s Dana Goldstein writes here on a potential mitigating factor we surely will hear about if Tsarnaev is convicted. (The Marshall Project)