What You Need to Know About the New Federal Prisoner Release

Five reasons it is (and is not) a big deal.

Starting Friday and over the next few days, the federal Bureau of Prisons is set to release an estimated 6,112 people from custody as part of an effort that reduced their sentences for drug crimes.

It is the largest one-time release of federal prisoners and it has been the subject of at least one recent political attack ad.

But updated numbers from the Bureau of Prisons show that only about 1,000 of the inmates will be heading home directly from penitentiaries.

Many of them — about 3,350 — have already left prison for halfway houses or home confinement over the past year. Edward Ross, a spokesman for the bureau, said 1,764 others will be turned over to the Department of Immigration and Customs Enforcement to face possible deportation hearings.

The release is the result of a vote by the independent U.S. Sentencing Commission last year to redraw federal sentencing guidelines for some drug offenses. As many as 46,000 people could see their sentences shrink under the new guidelines.

You could think of it as an opening round in the long-awaited battle over criminal justice reform. The question is, who fired it? And where will it land?

The Washington Post reported Tuesday: “The Justice Department is set to release about 6,000 inmates early from prison — the largest ever one-time release of federal prisoners — in an effort to reduce overcrowding and provide relief to drug offenders who received harsh sentences over the past three decades.”

This was, in the literal sense, not news. The prisoner releases were set in motion a year ago. (See below.) But to readers not immersed in the minutia of sentencing policy, it sounded like news, and it landed just as Congress is inching towards repairing a prison system widely deemed broken.

A bipartisan Senate compromise bill, rolling back some of the most draconian federal sentencing rules, was introduced last week and welcomed — with reservations — by many reform organizations. A more comprehensive bill is struggling in the House. Headlines about what sounds vaguely like a huge amnesty may test the public’s appetite for change, not to mention the spines of legislators. Some reformers suspect that was not an accident. 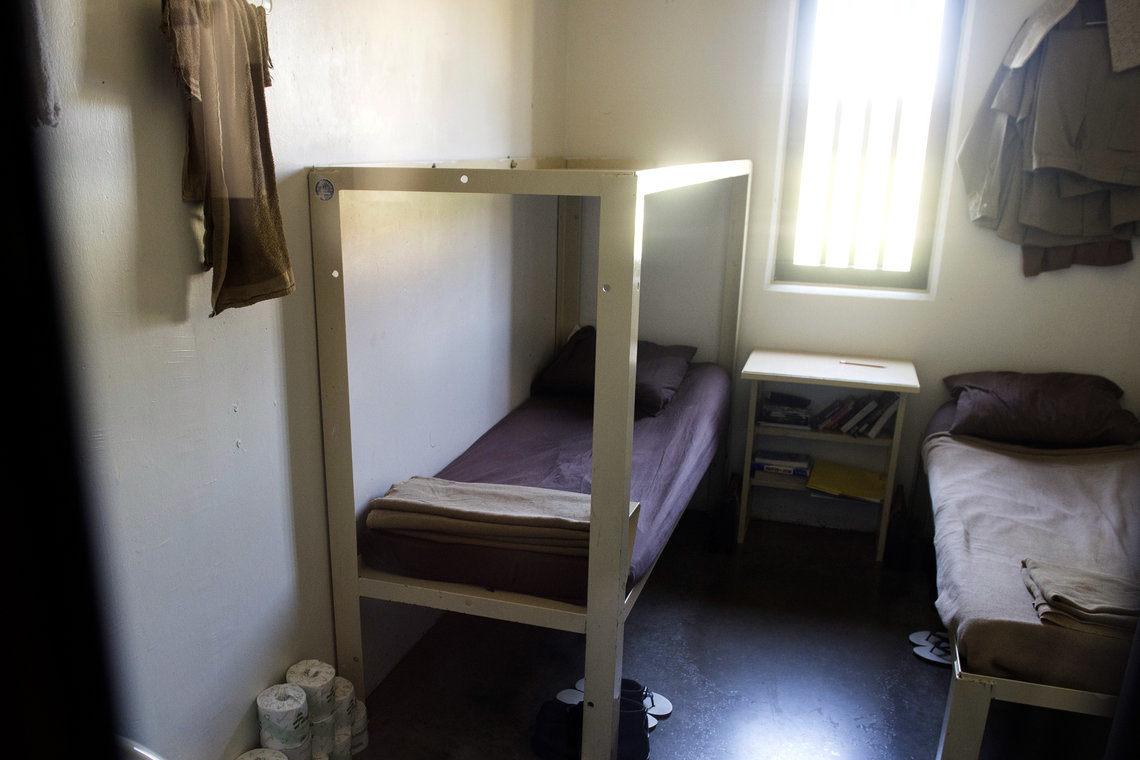 A cell at The El Reno Federal Correctional Institution in El Reno, Okla., during President Obama's visit in July.

One Republican leader of the bipartisan campaign for criminal justice reforms said he suspected the story was leaked by career prosecutors in the Justice Department or elsewhere, hoping to sabotage reform legislation inching through Congress.

"It comes just before the Senate marks up the bill," he said. "It's fodder for the Bill O'Reillys and Heather Mac Donalds," and other pundits on the right who might stir up public fear and weaken congressional resolve.

Other reform advocates said they hoped Americans would see the release in context. The Bureau of Prisons annually releases about 55,000 inmates who have served their time. State and federal prisons together free about 650,000 each year.

“Six thousand people could be a scary thing,” said Mary Price, general counsel of Families Against Mandatory Minimums, which campaigns for sentencing reform. “Or it could be a signal that we as a nation are serious about rethinking our approach to crime and punishment.”

This was the handiwork of the U.S. Sentencing Commission. What is it, and what did it just do?

The U.S. Sentencing Commission is an independent agency of the judicial branch, made up of a bipartisan mix of seven members who vote on punishment guidelines for federal crimes. The president appoints each of the commission’s members, and by law, the group is comprised of three federal judges and no more than four people from the same political party.

The agency was created by Congress in the 1984 crime control bill to “provide certainty and fairness in meeting the purposes of sentencing, avoiding unwarranted sentencing disparities among defendants with similar records who have been found guilty of similar criminal conduct.” (A short video on the commission's website provides a quick explainer.)

In April 2014, the commission unanimously voted to reduce the sentencing guidelines for many federal drug offenses. Three months later, the group voted unanimously again to make the sentencing reduction retroactive, meaning that the change would also shorten prison stays for thousands of inmates who are already serving time in federal facilities.

“We were motivated in part by the overcrowding in the federal prisons,” explained Rachel Barkow, a New York University law professor who was appointed to the commission two years ago. A congressional oversight agency has reported that federal prisons are more than 30% over capacity and needs $7 billion to pay for its “obligations.”

Congress did not block the commission’s decision, and the change went into effect nearly a year ago on Nov. 1, 2014. But the commission told federal Bureau of Prisons officials that no inmates could be released until late 2015.

“This was a result of over a year’s worth of planning,” Barkow said.

Let’s say John Doe is one of the prisoners to be released later this month.

Doe was convicted of a federal drug crime several years ago. At the time, the federal judge who sentenced him probably consulted something called the Drug Quantity Table, which showed what “offense level” Doe deserved based on the type and amount of drug involved in his crime. The judge then used a separate table, called the Sentencing Table, to figure out how many years Doe would go to prison based on his offense level.

But the Sentencing Commission’s new guidelines essentially instructed the courts to adjust Doe’s offense level downward by two levels, which in turn meant that his sentence could be reduced, too. For instance, if Doe trafficked 80 to <100 grams of heroin, he used to be a Level 24 offender, and he was sentenced to prison for 51 to 63 months. When the guidelines changed, he was adjusted downward two levels to a Level 22 offender, and he was now eligible for a new sentence of 41 to 51 months.

Ever since last November, all federal prisoners such as Doe who were sentenced under the old guidelines have been eligible to apply for this reduction. Federal public defenders have also been combing their records to find former clients who might be eligible for the reduction but might not be aware of it. As the applications have poured in, the courts have been granting about 70 sentence reductions a week.

Because of all these reductions, 6,000 prisoners will be released later this month. Another 8,550 may be released by November of next year — and an eventual total of 46,000.

How it doesn’t work:

The change in federal sentencing guidelines applies to a limited group of people. It does not provide relief to the roughly 208,000 people held in state prisons for drug convictions, which constitutes the majority of people serving time for such crimes in the United States.

And finally, those sentenced under federal mandatory minimums are also restricted in the sentence reduction they could receive. “There are very few ways a prisoner can get out from under a mandatory minimum,” said Mary Price of Families Against Mandatory Minimums. For example, a conviction for possessing 500 grams of cocaine triggers a 5-year minimum sentence, but other circumstances, such as possession of a gun, could garner additional prison time under the old sentencing guidelines. Any sentence reduction someone in that situation would be eligible to receive could not dip below 5 years total, since that’s the floor of the mandatory minimum. According to data released by the Sentencing Commission in June 2015, federal judges have denied re-sentencing to over 2,000 prisoners, and 520 of those denials were issued because the person was ineligible due to a mandatory minimum.

Since mandatory minimums are statutory, only Congress can reduce them—and lawmakers are currently considering a bill to do just that.

Thousands will go from federal prison to immigration detention.

About a third of the releases are non-citizens who will leave prison only to begin deportation proceedings, the Washington Post reported. (Roughly 24 percent of those who received the sentence reduction are not U.S. citizens.) That group includes both undocumented immigrants and legal residents who may now be deportable because of their crimes.

Such a large group of immigrants means there will be less of an immediate burden on halfway houses. In a letter voicing their support for retroactivity, Reps. John Conyers and Bobby Scott noted that, "many of these federal drug offenders do not have legal status in the United States or their convictions are deportable/removable offenses...thus eliminating the need for Probation’s involvement.” Immigrations and Customs Enforcement, however, will see an influx of detainees. Most of the individuals would be subject to mandatory detention while their case is decided because of their controlled substance convictions and would not be entitled to a bond hearing.

How it has worked in the past:

This is not the first time the Sentencing Commission has enacted retroactive drug sentencing changes affecting thousands of prisoners. The Commission’s first major change was in 2007, when it brought the sentencing guidelines down two levels for crack cocaine possession. Upwards of 16,000 federal prisoners had their sentences reduced from an average of 150 to 126 months. A subsequent Sentencing Commission analysis found no significant difference in recidivism between those released under the new guidelines and the old. In 2010, the guidelines changed again in response to the Congressional Fair Sentencing Act, aimed at addressing the 100-to-1 disparity in sentences for crack and powder cocaine. This change applied to almost 14,000 prisoners, whose average sentence dropped from 153 months to 120 months.