The moves by Prisoner Transportation Services come a month after a Marshall Project story.

By Eli Hager and Alysia Santo

The country’s largest private extradition company, Prisoner Transportation Services, said Friday it has taken several steps to improve prisoner safety on its vehicles as it seeks approval to merge with its biggest national competitor next week.

The company, which recently came under federal scrutiny after The Marshall Project and The New York Times reported on the deaths of several prisoners, said it is installing cameras and a real-time tracking system throughout its fleet of 33 vehicles.

PTS said it also has hired a compliance officer to ensure the company follows federal regulations and retained lawyers to undertake an independent review of practices within the company and the industry.

“We are committed to doing things right and being an industry leader,” the company said in an email.

The announcement comes as PTS, which transports suspects and fugitives back to the jurisdictions where they are wanted, is poised to merge with U.S. Corrections, its closest rival in the national market. The federal Surface Transportation Board is set to approve the deal Tuesday unless public comments are filed.

It also comes about a month after U.S. Attorney General Loretta Lynch told House lawmakers that her office would investigate apparent lapses in federal oversight of the private extradition industry. The Marshall Project investigation, published in July, revealed a pattern of inhumane conditions, abuse and deaths of prisoners aboard for-profit extradition vans, which are largely unregulated.

Tens of thousands of people every year are packed into vans run by for-profit companies with almost no oversight.

Inside the Deadly World of Prisoner Transport

Since 2012, at least four people have died while being transported by PTS, and since 2000, at least 60 prisoners have escaped from private extradition vans. At least two dozen prisoners and guards have been killed or seriously injured in crashes.

The merger would leave Tennessee-based PTS as the only major company in the national extradition market. In 2015, PTS acquired U.S. Prisoner Transport, a Florida company that was then one of its chief competitors.

PTS has contracts or relationships with 800 law enforcement agencies, and U.S. Corrections has contracts with 25, federal filings say.

U.S. Corrections was formed in 2014 and has apparent ties to another extradition company, Florida-based USG7, which dissolved in 2014, according to a filing with the Florida Department of State. USG7 still owes at least $200,000 in legal judgements awarded to inmates injured in crashes and to former employees, according to a review of court records and interviews with attorneys.

Asked whether the two companies were linked, Dustin Baldwin, the executive director and part owner of U.S. Corrections, said in an April email, “I couldn’t tell you anything about ‘USG-7’ other than we had some staff that used to work there.” U.S. Corrections did not respond to requests for comment on Thursday. 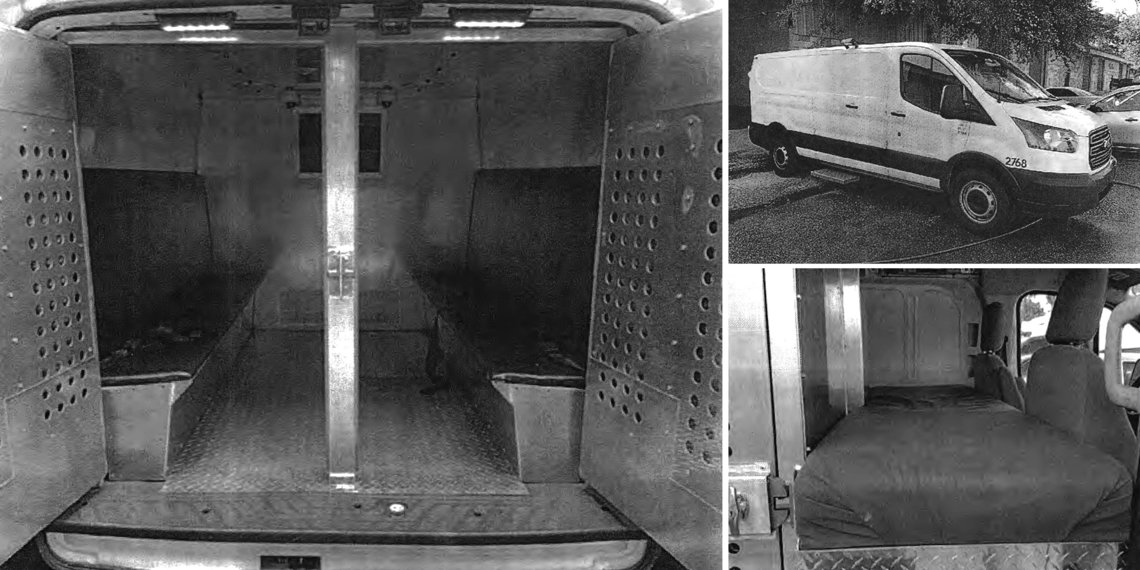 A PTS spokeswoman did not respond to a request for comment on ties between USG7 and U.S. Corrections. The companies said in their merger application that the deal is “primarily about acquiring the talent and operational experience of” U.S. Corrections.

The application does not mention USG7, whose operations supervisor, Ashley Jacques, became director of operations at U.S. Corrections and is also a part-owner. Walter Thomas, a former president of USG7, became one of U.S. Corrections’ lawyers.

Fernando Colon, a former employee of both companies, said that in the first months that he worked for U.S. Corrections, he was still getting paid with USG7 checks, one of which he provided to The Marshall Project. He also said he was instructed to order equipment with a USG7 credit card, which he said his bosses wanted to “max out.”

In July 2014, a USG7 email address and registration number was used in dealings between U.S. Corrections and the Department of Transportation, according to DOT filings. And in a bid for work with West Virginia submitted last year, U.S. Corrections wrote, “U.S. Corrections is a new company by name but not by existence, experience, and management. The name U.S. Corrections…was formed in January of 2014 after an existing company decided to leave the prisoner transportation industry.”

Between 2010 and 2014, USG7 vans crashed at least six times, including one crash that killed a guard. In another case, a prisoner sued for injuries he sustained when a USG7 van rolled during a thunderstorm. A federal judge ordered a $100,000 default judgment against the company, but it has not been paid. USG7’s insurance had also lapsed at the time of the incident, according to court documents and records provided to reporters by the prisoner’s attorney.

USG7 was also found liable last year for a default judgement of more than $134,000 after three employees claimed they were not paid their wages. That has not been paid, a lawyer for the employees said.

In April, the Michigan Department of Corrections canceled its contract with U.S. Corrections, writing in a letter that the company had allowed an escape and frequently failed to deliver inmates on time. Michigan has since switched to PTS.