It is the latest call for an investigation of the for-profit extradition industry.

By Alysia Santo and Eli Hager

A federal transportation regulator has urged the Justice Department to investigate accusations of “human rights violations” on privately run vans that carry tens of thousands of prisoners across long distances every year.

Deb Miller, vice chairman of the Surface Transportation Board, made her comments last month, echoing calls from lawmakers this summer for a probe of Prisoner Transportation Services, the nation’s largest private extradition company, and others in the field. The company was highlighted in a Marshall Project investigation that revealed a pattern of deaths and abuse in the industry.

“The problems of prisoner abuse, sexual assault, and medical neglect by Prisoner Transportation Services, LLC… are very concerning,” Miller wrote in a comment appended to the board’s Nov. 10 decision to grant approval for PTS to merge with its largest competitor, U.S. Corrections.

Attorney General Loretta Lynch told the House Judiciary Committee in July — shortly after The Marshall Project story was published — that her office would review apparent lapses in federal oversight of prisoner transport companies. A spokesman for the Justice Department said recently the agency is still working on a report. 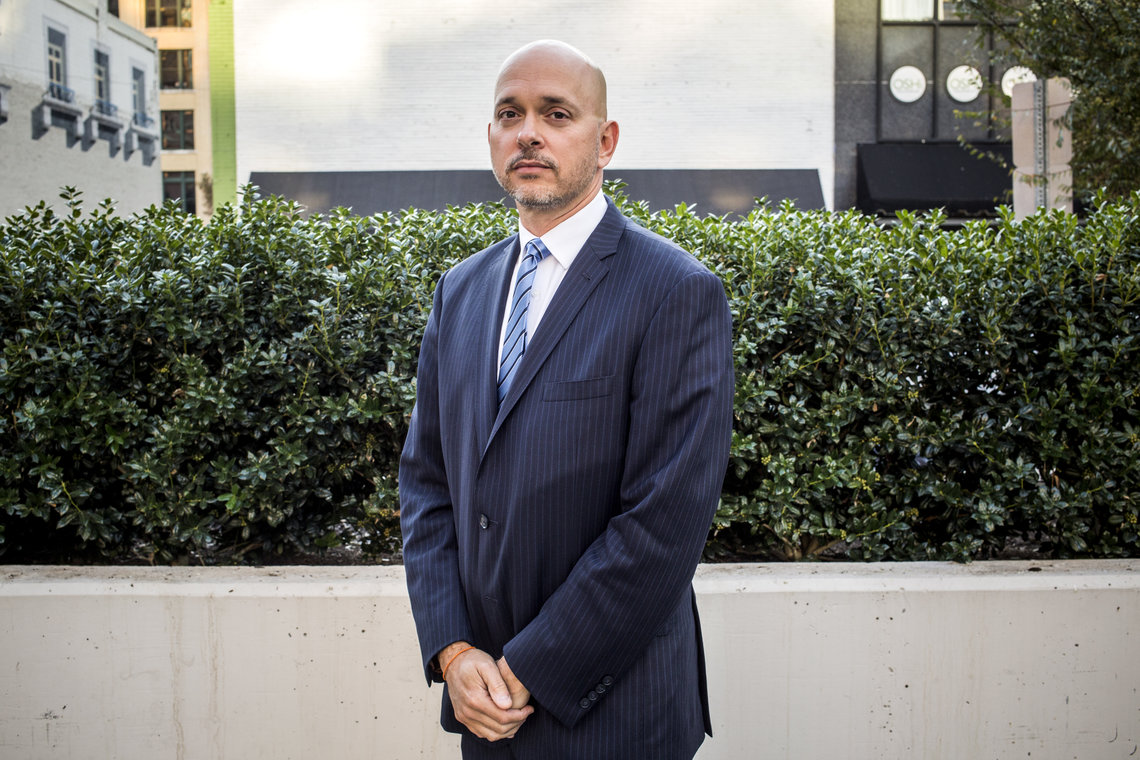 Joel Brasfield, President and General Counsel of Prisoner Transportation Services, in Nashville, in 2016.

The merger between PTS and U.S. Corrections had been put on hold on Aug. 9 after the Human Rights Defense Center, a nonprofit prisoner advocacy group, filed an objection to the deal, arguing that both companies have a history of prisoner abuse. Those concerns, however, were deemed to be outside of the Surface Transportation Board’s purview, which is focused narrowly on the economic impact of a merger.

For-profit extradition companies transport suspects, fugitives, and others with open arrest warrants across state lines to where they are wanted. Many of these prisoners are first held in a local jail, sometimes for weeks, before they are picked up for the transport.

The companies are governed by a 2000 federal law commonly known as Jeanna’s Act, which sets out some broad standards for treatment of prisoners. But the legislation has only been enforced one time in the 16 years since, despite at least 60 prisoner escapes, 50 crashes, 14 alleged instances of sexual assault, and 16 deaths on these vans during that time, The Marshall Project investigation found.

The story prompted some changes at PTS, which is based in Tennessee and has contracts with state corrections departments and hundreds of local law enforcement agencies. At least four prisoners have died aboard PTS vans from alleged abuse or medical neglect since 2012. PTS officials declined to comment on those deaths.

In a recent interview at the company headquarters, Alan Sielbeck, the chief owner of PTS, and its new president, Joel Brasfield, said six of their 29 vans have been outfitted with cameras, although the software for recording and saving footage has not yet been installed. They said they hoped it would be available soon and the entire fleet would have cameras within 12 months. 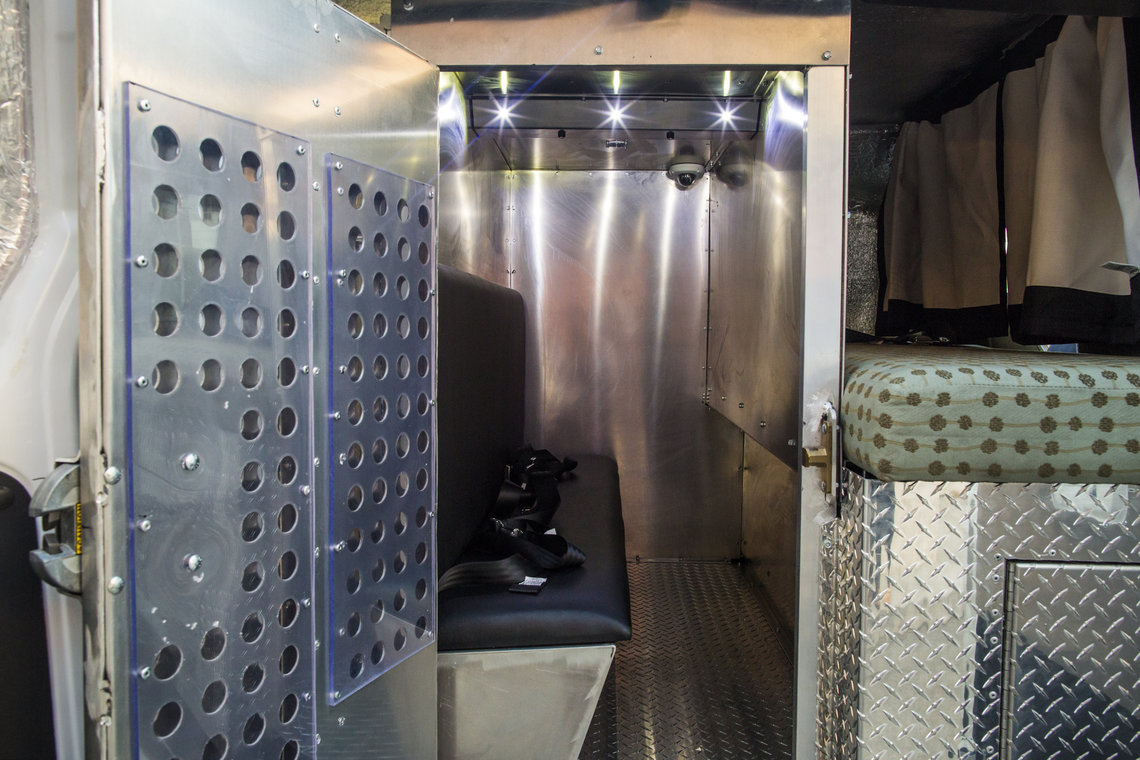 The updated front holding compartment in a Prisoner Transportation Services van. The compartment no longer contains a metal door that isolates a single seat.

When asked how the video will be used, the officials said it would be too costly to record and preserve all of it for more than a few weeks. Simply having the devices in the fleet would influence guards and inmates to behave better, they said.

In addition, PTS officials said they have increased their staffing to 80 guards from about 35 so each of them can have more time off. Instead of getting only 12 hours to rest in between every 36 hours of driving, they will now have 24-hour breaks every two days — although that schedule depends on finding a jail along the way that is willing to take the inmates overnight.

To prevent further deadly emergencies during transit, Sielbeck and Brasfield said they have prioritized the position of “medical verification” officer to obtain advance information from jails about medical problems of inmates picked up by PTS. If an inmate has a severe diagnosis, he or she can be escorted on a commercial flight instead of a days-long trip in one of the vans. PTS said it does not yet have enough data to determine whether air transports have become more common.

“We’re kind of a slave to that holding agency,” Brasfield said. He said jails can withhold medical information either intentionally or unintentionally.

Meanwhile, classroom training for guards has been upped to two weeks from from three days, including lessons on what to do if an inmate is in distress. Seatbelts have also been installed in six of the vans, although Brasfield acknowledged they may be removed because “the industry has gone back and forth” about whether the straps and buckles can be used as weapons or to pick locks.

Florida Rep. Ted Deutch, who questioned Lynch about the federal government’s role in monitoring prisoner transportation companies, called PTS’s efforts encouraging but said he plans to continue advocating for oversight of the industry.

“We need to stay on this and make sure things are carried out effectively,” Deutch said. “We’re going to share this information with Justice and hope that it spurs action,” he added, noting that the department’s upcoming report will allow him to “determine whether additional legislative action is necessary.”

Despite emphasizing the improvements, PTS officials defended their business model. 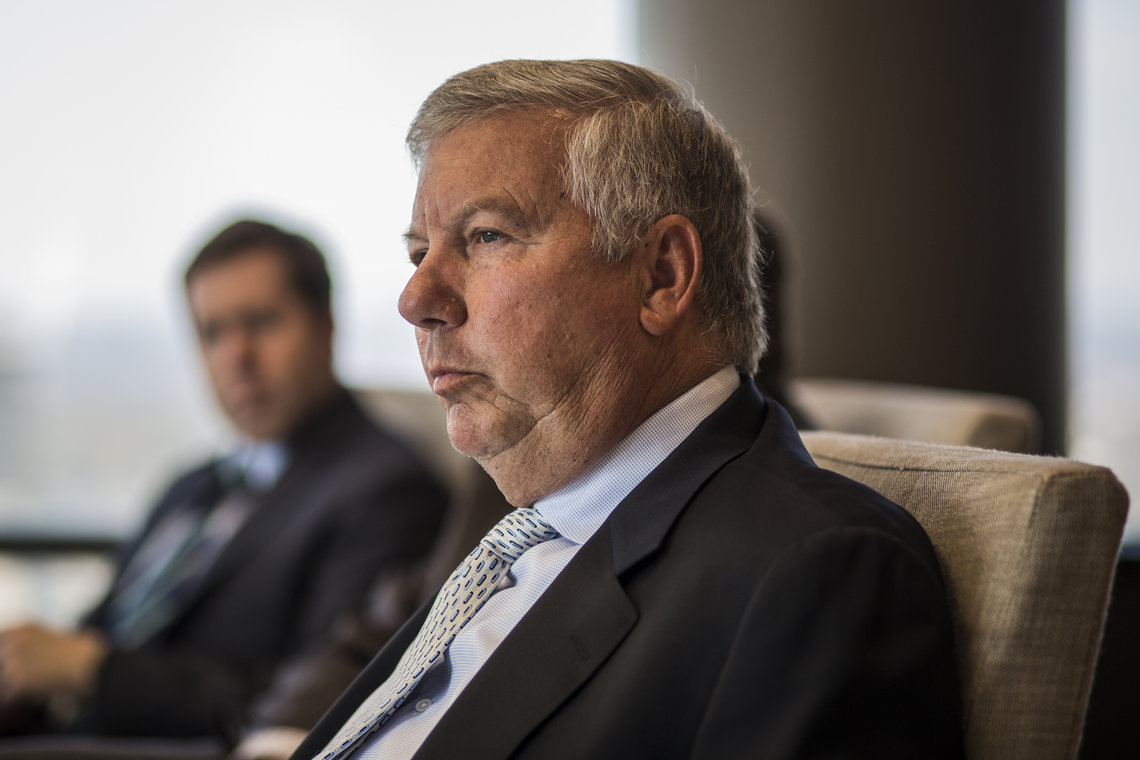 Alan Sielbeck, an entrepreneur, is a main shareholder of Prisoner Transportation Services.

Sielbeck, who described himself as “a self-avowed capitalist,” said there’s no clear alternative to for-profit prisoner transport. “The government can do it different but very seldom does the government do it better,” he said, referring to the U.S. Marshals and local sheriffs.

Asked about claims of abuse and neglect that have been made by inmates, Sielbeck said, “The transported community can take stories and embellish them.”

Sielbeck and Brasfield also pointed out that PTS is more compliant with federal regulations than some of its mom-and-pop competitors, which use minivans not covered by the same passenger carrier rules. They suggested they might even advocate more scrutiny of the industry and demand that states put more safety requirements in their contracts with these companies.

But when pressed on whether PTS would actually demand such higher standards, the officials said they do not have a large budget for lobbying and would only share their ideas about how to better regulate the industry if contacted by the government.

They added that they believed chances of that happening under the incoming Trump administration are slim.