Candidates backed by Soros, others are still pressing ahead in other parts of the country. 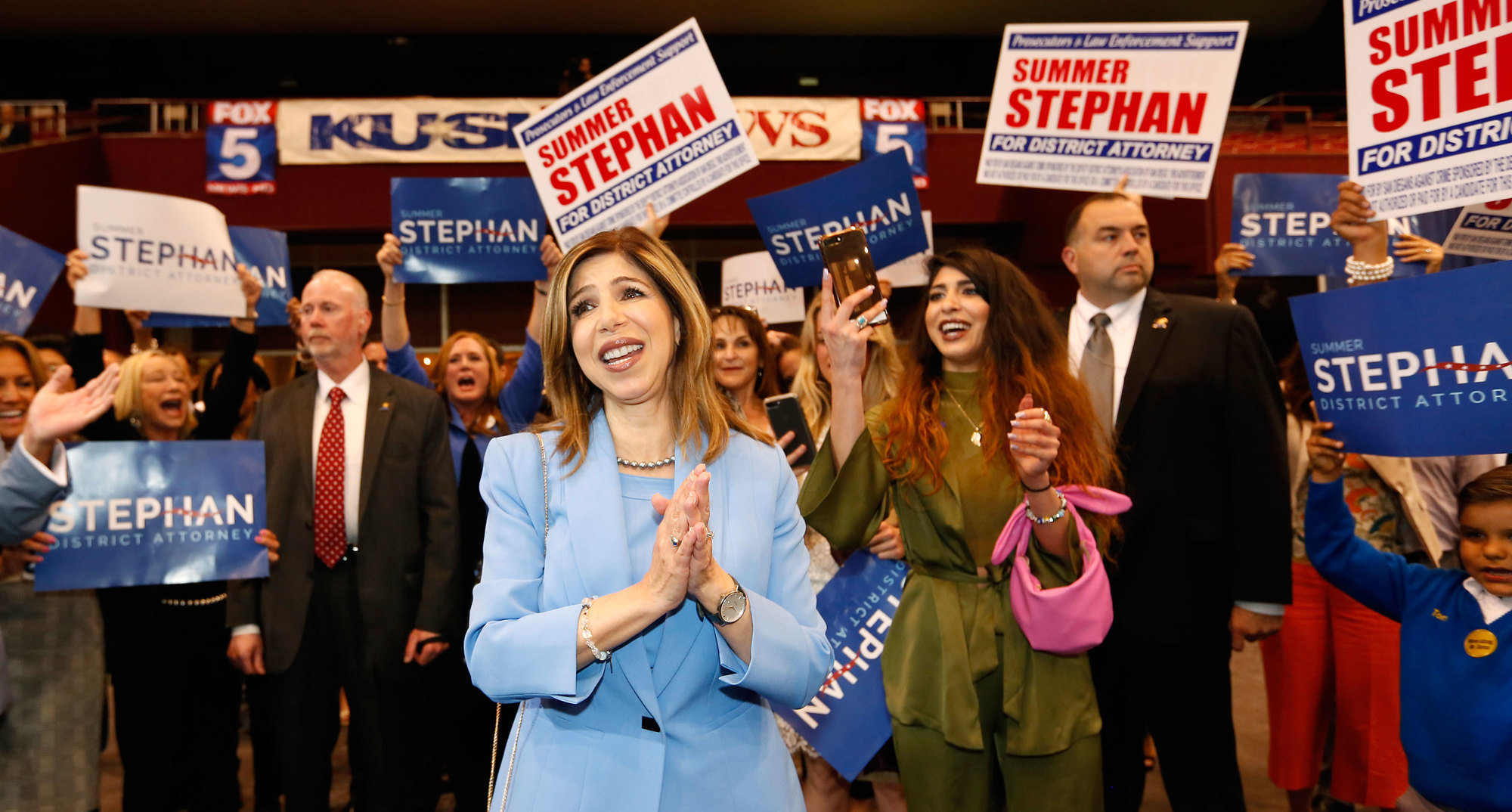 District Attorney Summer Stephan in San Diego on Tuesday. Stephan appeared to hold off a challenge from a Soros-backed candidate in San Diego's primary. K.C. Alfred/San Diego Union-Tribune, via Newscom
By Abbie VanSickle and Maurice Chammah

A version of this story was published in partnership with The Los Angeles Times.

A consortium of wealthy liberal donors and activists, headlined by New York billionaire George Soros, contributed millions of dollars to battle candidates backed by money from law enforcement groups. Four races dominated. In Sacramento, Alameda and San Diego counties, the challengers lost. In Contra Costa County, their candidate—Diana Becton, a former judge appointed as district attorney last year—was 500 votes shy of a majority and will likely face a runoff against career prosecutor Paul Graves in November, according to initial returns posted by county elections offices. It’s unclear how many ballots remain to be counted.

“I don’t think they suggest that the movement to elect reform prosecutors has hit a wall,” said Stanford Law Professor David Sklansky. “It’s still very difficult to run against an incumbent district attorney.”

Progressives have been mounting such campaigns since 2015 and will continue their efforts this year, when prosecutor elections are likely to get national attention in Massachusetts, Texas, North Carolina and Missouri.

District attorneys wield enormous influence within local criminal justice systems, deciding what charges to prioritize for prosecution and when to seek rehabilitation or lengthy incarceration. By supporting the election of like-minded district attorneys, the network of national and local activists and funders hope to secure many of the sentencing and bail policies they have struggled to realize through laws or ballot initiatives. 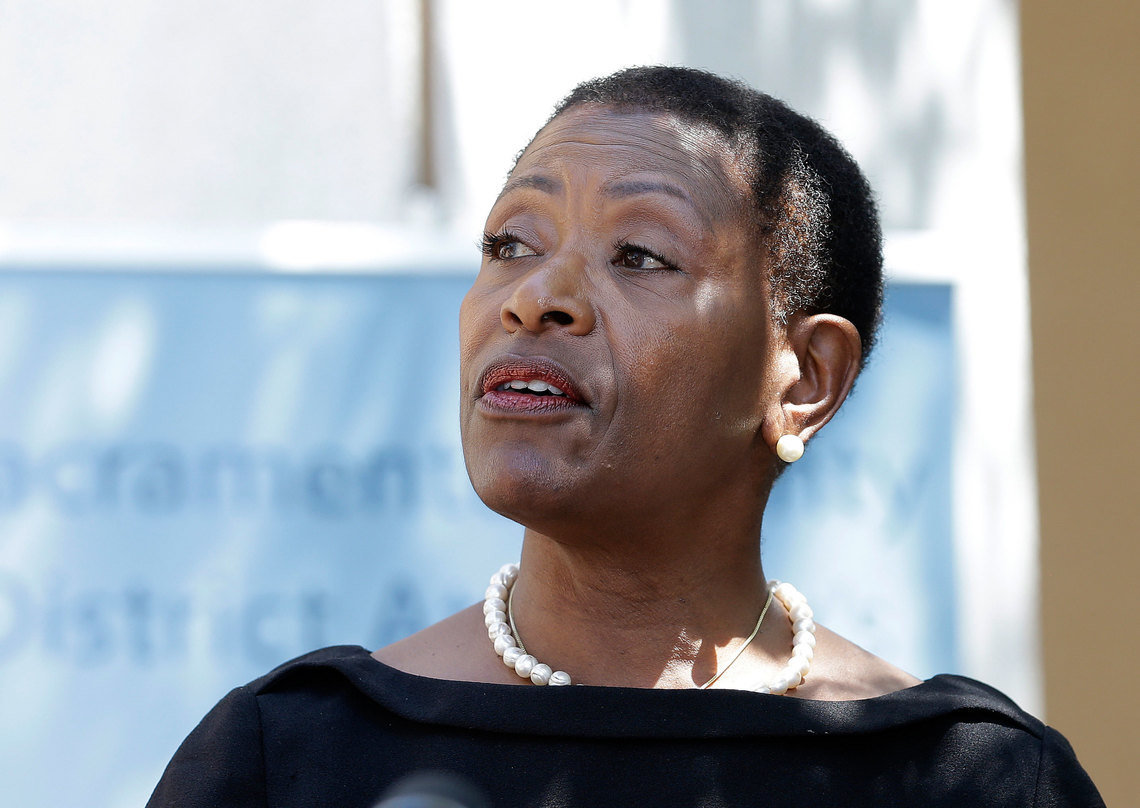 It appears more money and louder rhetoric are here to stay. The singer John Legend and the actress Roseanne Barr have weighed in. Several incumbents targeted by Soros accused him of trying to buy local justice systems.

The campaigns have alarmed many in law enforcement, who warn of a slippery slope if prosecutors pick and choose what laws to enforce. “They’re basically promising in advance to violate their oath of office,” said Michele Hanisee, president of the union that represents Los Angeles County prosecutors. “It is not the job of an elected district attorney to decide what laws to uphold. The district attorney’s job is to implement the law.”

In Sacramento, the liberal coalition supported Noah Phillips, a career prosecutor who challenged his boss, Anne Marie Schubert, a prominent conservative voice in statewide politics. Phillips focused on anger over police shootings, particularly the death of Stephon Clark, an unarmed black man shot in March as officers searched for a burglary suspect. The race took another twist in April, when Schubert announced the capture of a suspect in the infamous Golden State Killer case. Her campaign capitalized on the arrest, unrolling new ads that touted, “She protects us.” Schubert declared victory, though Phillips had not conceded as of Wednesday morning because many ballots had not yet been counted

In San Diego, incumbent Summer Stephan faced a challenge from Geneviéve Jones-Wright, a deputy public defender who promised, among other things, to create a police accountability unit. When Soros announced support for Jones-Wright, Stephan launched a website calling Jones-Wright “the anti-law enforcement candidate.” On Friday, families in two high-profile local homicides held opposing news conferences, one siding with Stephan, the other criticizing her. Stephan won.

Both sides are reading the tea leaves in the California results. The progressives believe the challenges, though unsuccessful, will force the winners to be more responsive to their communities. “These candidates force conversations that hadn’t been happening before, and they were so persuasive that some incumbents were forced to address those issues,” said Adam Foss, a former Massachusetts prosecutor who trains his peers around the country through the group Prosecutor Impact.

For some prosecutors, the races were proof that liberals are too quick to assume that voters will choose their vision. “The idea that there is a dichotomy between lock-em-up, tough-on-crime prosecutors and enlightened progressives is false. It’s more nuanced,” said Joshua Marquis, the DA of Clatsop County, Oregon, who is on the board of the National District Attorneys’ Association. “There might be voters who chose Bernie Sanders but then chose Anne Marie Schubert or Nancy O’Malley.”

Big-money intervention has fueled criticism that outsiders are interfering in local campaigns they know little about. Some candidates complained they have been targeted despite their support for liberal justice policies. “It’s a big-money, outside money approach where they didn’t even interview candidates,” said James Fisfis, a consultant to Paul Graves, who has pledged not to prosecute cases in which police conducted a search or made an arrest based solely on racial profiling a suspect. “The whole thing is just strange to us.”

These dynamics are sure to continue as more elections loom across the country. Organizers say the campaigns are just the start of a long-term strategy. Though it remains to be seen which races will get such attention, a few show signs of turning into big battles. Color of Change PAC, which has received funding from Soros, is supporting Faris Dixon, a district attorney candidate this fall in Pitt County, North Carolina. With an incumbent departing in Suffolk County, Massachusetts—encompassing Boston—the field there is wide open. In nearby Middlesex County, a defense lawyer is challenging an incumbent. Bob McCulloch, the longtime incumbent in St. Louis County, Missouri—who was criticized for failing to get an indictment of Darren Wilson for the 2014 shooting of Michael Brown—will face Wesley Bell, a Ferguson City Council member who wants to “end mass incarceration,” in August.

“It’s notable that reformers got 35 to 40 percent—that’s significant for a brand-new strategy that’s up against a deeply entrenched and resourced establishment,” said Anne Irwin, a former San Francisco public defender who started a nonprofit advocacy organization that helped a network of donors identify candidates to support. “We’ll continue to educate voters about the power of their district attorney, and we’ll get ready for 2020 and 2022.”

Full disclosure: The Marshall Project receives funding from the Soros-funded Open Society Foundations and other organizations that support efforts to reform California's criminal justice system. Under the terms of its funding, The Marshall Project has sole editorial control of its news reporting.

Correction: A previous version of this story incorrectly described a successful district attorney candidate in Oregon as an incumbent.