More Women Are Behind Bars Now. One Prison Wants to Change That.

Connecticut’s WORTH program uses therapy, classes and mentoring to try to keep women from coming back. 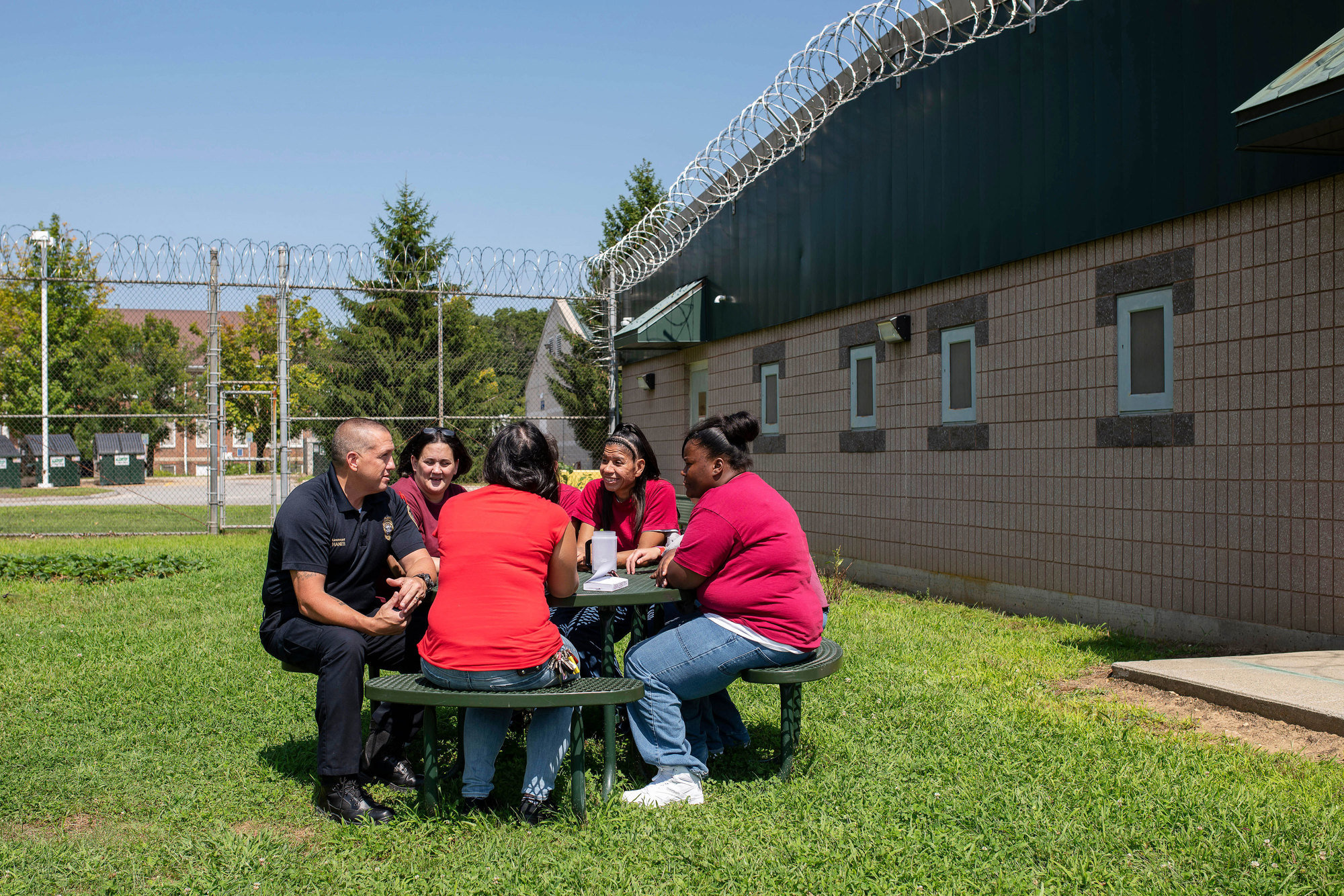 Lt. Russell Hanes, left, and counselor Colleen McClay, in bright red at center, chat with women who are incarcerated at York Correctional Institution in Niantic, Conn., in August. Karsten Moran for The Marshall Project
By Maurice Chammah

Despite their names, state “departments of correction” in the United States aren’t known for correcting much. More than seven of every 10 prisoners, according to some studies, are arrested again less than four years after they are released. And while recent years have seen the beginning of a national decline in the number of male prisoners, the situation has not improved much for women, who remain incarcerated at stubbornly high levels.

Connecticut is trying to push back by focusing on one group that is especially likely to return to prison: young women, ages 18 to 25.

It began in the summer of 2015, when Scott Semple, who runs the Connecticut state prison system, spent a week visiting prisons in Germany. Two American nonprofit organizations have been running such trips in recent years, and they have helped to inspire a handful of prison reform experiments in both red and blue states. The goal is to promote rehabilitation by mimicking the European emphasis on personal dignity. For example, Pennsylvania is teaching corrections officers to think like therapists, while North Dakota has been giving prisoners keys so they can lock their own doors.

Semple was especially struck by a German prison for young adults, in which men and women between the ages of 18 and 25 were housed in a verdant compound that resembled a liberal arts college. They were given intensive therapy and training in trades like welding and farming.

Neuroscience studies have shown that our brains keep developing well into our third decade, meaning people in their early 20s can still exhibit the impulsiveness and poor decision-making we associate with teenagers—ask any parent or insurance company about this—but are also especially receptive to help. With this in mind, Washington State has raised to 25 the age of considering an offender a juvenile for some crimes, while Chicago and San Francisco have created specialized young adult courts.

Since his trip to Germany, Semple has put Connecticut at the forefront of efforts to bring such ideas into prisons. Last year, the state started a program for young men called TRUE, at the Cheshire Correctional Institution. Officials from South Carolina and Massachusetts have visited and started young adult programs of their own. 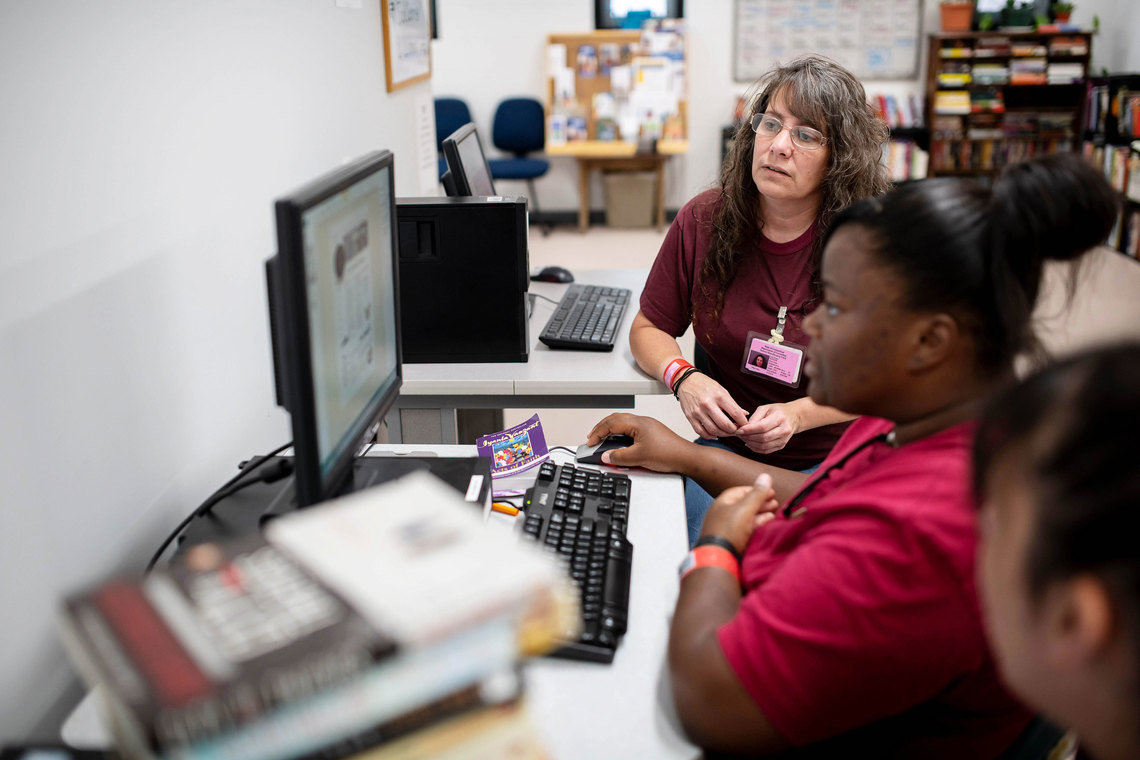 From left, prisoners Deborah Ranger, Robin Ledbetter and Rebekah Robinson work in the jobs center in the WORTH unit at York Correctional Institution in August.

Karsten Moran for The Marshall Project

The newest program, called Women Overcoming Recidivism Through Hard Work, or WORTH for short, began in June at the York Correctional Institution, a women’s prison in eastern Connecticut. There are currently 14 women who live with 10 older mentors, who are also serving time. Together, they are given wide latitude to develop the program themselves. The days are packed for the younger women with counseling, classes and addiction help, giving them a version of parenting they may have lacked.

Officers are trained to talk to the women about their traumas and vulnerabilities. There is an emphasis on planning for a crime-free life after release: everyone has a job inside, and they apply for a new one every two weeks, meaning they get frequent opportunities to interview and write resumes.

The Vera Institute of Justice, which has been helping prisons set up programs like these, pushes the administrators to ask the prisoners what kinds of assistance they need. The organization creates surveys for the staff and prisoners, and then holds meetings to unpack the results and design classes and routines. Even giving the prisoners a tiny bit of control can influence the way they think about themselves. When they were setting up WORTH, “there was a heated debate about how they’d do laundry,” Alex Frank, a project director at Vera, said. “Does everyone do their own? Do we assign two people? It was very much self-governance.” Inspirational quotes adorn walls covered in chalkboard paint, paper flowers sit atop meal tables, and in the big outside yard, the women often play basketball with the officers, which is rare in other prisons.

“I’m the president of the health and wellness committee here,” Lauren Karpisz, 24, said. “We’re starting to have exercise classes a few times a week and will post healthy recipes using food items from the commissary.” She wants to organize a prison version of the cooking competition show “Chopped.”

Karpisz is serving three years for her role in an assault on a 53-year-old man during a home invasion and attempted robbery in Waterbury. “I’m a drug addict,” she said, matter-of -factly. “I was on drugs, and seeking more drugs, and somebody was hurt.” In the WORTH program she began to explore how she’d gotten there. She now explained that she had been prescribed medication for chronic pain from a young age, and had drifted toward heroin.

It wasn’t an excuse, but an explanation that could serve as the basis for change. All of the young women here are encouraged to articulate how circumstances and their own decisions combined to produce their crimes. They are given guidance on how to handle their emotions without reacting impulsively.

“We don’t have to hide behind our attitudes here,” said Jazmine Ortiz, 20, who is in prison for a probation violation stemming from more serious crimes committed as a juvenile. “We have the opportunity to open up to the mentors. They know what to look for when we seem shy or isolated.” When there is a disagreement, the women sit in a circle and “work through it like a family would.”

This hasn’t necessarily been comfortable for the officers, many of whom are used to an environment in which rules are ironclad and nobody is encouraged to share feelings or life histories. But a few have taken to their new role as quasi-therapists and social workers. When Lt. Russell Hanes learned that one young woman would get nervous when men were behind her—owing to earlier abuse in a relationship—he encouraged other officers to tell her when they were approaching. “Staff had to give inmates a chance, but inmates had to give staff a chance, too,” Jeffrey Zegarzewski, a deputy warden, said.

Plenty of staff members and prisoners think the program is too permissive and unlikely to change the behavior of the young women. The corresponding program for young men has been in place for a year. It is credited for a reported drop in prison violence, but not enough people have been released from any of these programs to indicate whether they will reduce recidivism. One study found that less than half of Germans released from prison are convicted again within three years, though not for crimes serious enough to bring them back to prison. In the same time frame, more than two-thirds of Americans are arrested again. But scholars caution against direct comparisons, because the countries differ radically not only in prison conditions but also in sentencing practices and definitions of what constitutes crime.

These new programs are expensive, too. At its current capacity, WORTH will involve roughly six officers overseeing 60 women, while in other parts of the prison two officers may oversee 90. The department originally wanted to convert an entire prison for young male adults, but couldn’t afford it. Connecticut officials have not issued a comparison of the cost per inmate between the new and old approaches.

What’s most striking about this program is hearing prison officials talk about a newfound sense of purpose. They no longer reduce success to statistics about arrests or disciplinary infractions. They tell stories of individuals gaining control of their lives and reconnecting with estranged family members.

And they use the word “dignity” a lot, much like their counterparts in Europe. They take pride in the idea that they are truly a department of correction.

“Sometimes when I’m having a bad day, I hop in the car and visit one of these units,” Semple said. “Can you measure that? No, but you can feel it.”