Neko Wilson to be released in the first test of California’s felony murder law. 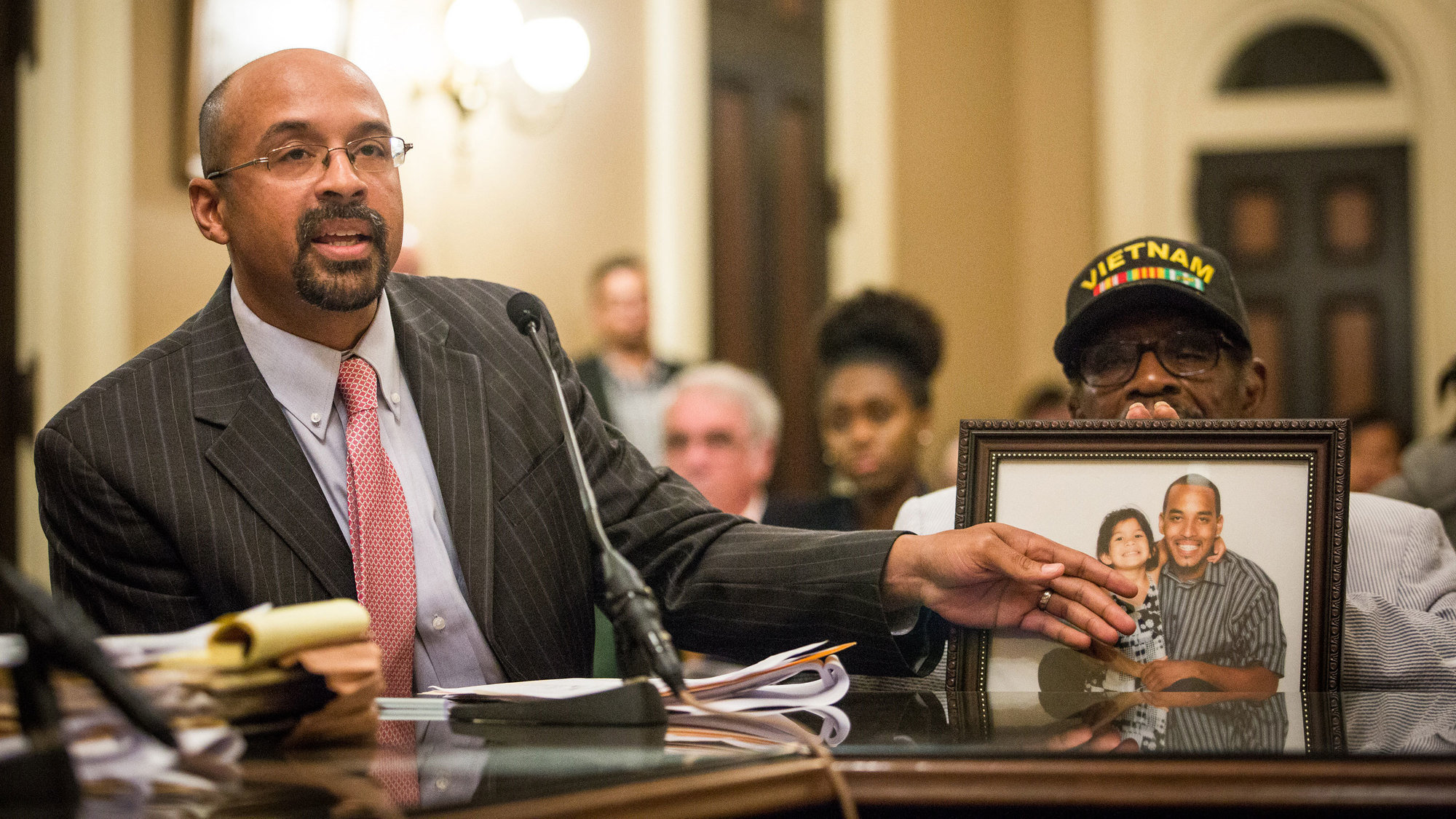 Jacque Wilson, left, and his father, Mack Wilson, right, testify about their brother and son Neko Wilson, during a California Assembly Public Safety Committee hearing at the State Capitol in Sacramento in June. Max Whittaker
By Abbie VanSickle

In the first test of a newly signed law that significantly narrows California’s felony murder rule, a judge today ordered the immediate release of a man who has spent nearly a decade awaiting trial in double murder.

Neko Wilson, now 36, had initially faced the death penalty in connection with the July 2009 murders of Gary and Sandra DeBartolo, a couple killed during a robbery at their home in California’s Central Valley. Prosecutors had accused Wilson of helping plan the robbery, not of killing the couple. He initially faced the death penalty under a legal doctrine known as the felony murder rule, which holds that anyone involved in certain types of serious felonies that result in death can be held as liable as the actual killer.

But a new law signed by Gov. Jerry Brown in September significantly narrowed that doctrine and prompted prosecutors to drop the murder charges against Wilson.

“It’s overwhelming,” said Jacque Wilson, who is Neko Wilson’s brother and his lawyer, as he stood outside the courtroom immediately after hearing Judge John F. Vogt’s decision. “You go from being someone the state wanted to kill, to someone who’s coming home.”

In court, Neko Wilson agreed to a plea deal on robbery charges, as well as charges in unrelated cases. The total sentence for those charges added up to nine years, the amount of time he’s already been jailed awaiting trial.

The prosecutor, William Lacy, senior deputy district attorney in Fresno, said the new law had left prosecutors little choice. “It’s a new world we live in,” Lacy said. “It certainly means that people who were charged with murder previously won’t be charged.”

Lacy told reporters that he “absolutely” believed the new law would have a negative impact on public safety in California.

The felony murder doctrine has long been controversial. Many prosecutors say that it is critical to be able to hold people accountable for deaths that happen during serious crimes. Defense lawyers say that it often sweeps up people who had no intention of killing anyone, like getaway drivers and lookouts.

Advocates for the legislation say that hundreds of cases could be affected by the law.

The bill faced opposition from many law enforcement groups, including the California District Attorneys Association and the California Police Chiefs Association, and victims’ groups, such as Crime Victims United. These groups voiced concerns that it would harm public safety and could force the re-examination of hundreds of murder cases.

With the new law, California joins a growing number of states in abolishing or severely narrowing felony murder. Over the decades, legislatures in Hawaii and Kentucky have abolished the rule, and, last fall, Massachusetts joined Michigan in ending it through the courts.

The case has been a long, complicated legal battle.

In July 2009, Gary and Sandra DeBartolo were found dead in their Central Valley home, their throats slashed.

Prosecutors arrested six people in connection with the killings, including Neko Wilson, who they say had helped craft a plan to steal high-grade marijuana from the couple’s home. Prosecutors alleged that Wilson sat in a vehicle nearby as others went into the house to rob the couple. The DeBartolos were killed during the robbery.

Court records show that Jose Reyes, Chris Bernard Butler and Andrew Jones have accepted plea deals in the case. A jury convicted another co-defendant, Dawn Singh, who was sentenced to life in prison without parole in the killings. Prosecutors accused Singh of driving the getaway car. Another co-defendant, Leroy Johnson, is still awaiting trial and could face the death penalty if convicted.

“Obviously, this whole case is a tragedy,” Jacque Wilson said outside the courtroom after the hearing. As he talked about his brother, he grew quiet. His jaw tightened, and he began to cry. “But two wrongs don’t make a right. I believe that justice was done.”

“It’s one of the happiest days of my life,” he said. “I thought I’d never see him or touch him again.”

Mack Wilson said he hoped Neko Wilson would be released quickly so he could make it home for dinner. The previous day, he’d cooked a feast of ribs, potato salad and corn bread in preparation for his son’s homecoming.

“I’m the happiest guy in the universe,” he said.