He’s Living With Severe Mental Illness. Should He Face the Death Penalty?

A South Dakota case reflects the national debate on whether execution should be banned for the mentally ill.

Aleesha DeKnikker was grocery shopping, her phone set to silent, when the voicemail from her mother, Carol Simon, came in: “Oh, it’s just Mom. Your brother has really lost it, Aleesha.... He’s just having a mental breakdown and he won’t even believe where he’s from. He won’t even believe that I gave birth to him…. I don’t know what to do.”

Six weeks later, Simon was found dead, along with her 7-year-old grandson, Brayden Otto. Her son, Heath Otto, 24, admitted to investigators in Sioux Falls, South Dakota, that he had strangled his mother and nephew with a phone cord and then slit their throats.

Soon after, Otto was ruled incompetent to stand trial, and he was sent to a state hospital. Doctors hired by his defense lawyers diagnosed him with schizophrenia. The Minnehaha County state’s attorney, Aaron McGowan, told DeKnikker that her brother could face the death penalty. A trial will take place as soon as Otto’s mental condition stabilizes, unless the prosecutor agrees to let him be committed to a hospital permanently rather than face prison and potential execution. 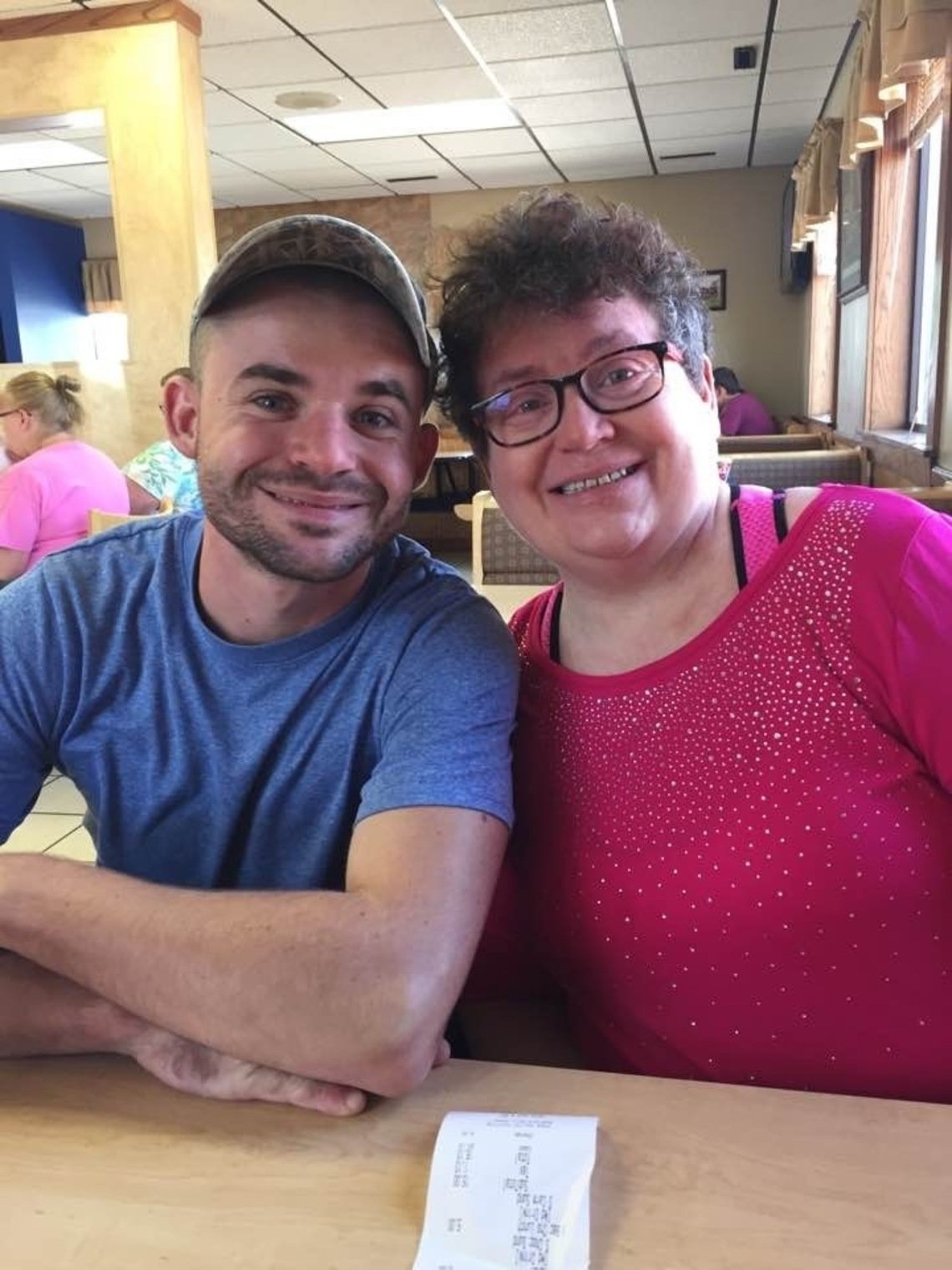 The case is gearing up amid a broader decline in the death penalty, as lawmakers around the country are considering bans on death sentences for people with certain serious mental illnesses. Some prosecutors have pushed back, seeing these bans as a backdoor effort to abolish the punishment entirely.

Otto was close to his mother growing up, and he began experimenting with drugs as a teenager. After a discharge from the Marines in his early 20s—he was caught using steroids, his sister said—she started to notice moments of paranoia. “Unless you were close to him you wouldn’t see it,” Simon’s friend Maddie Borah said. “He was going to school to be an electrician, and he’d be convinced people were going into his toolbox.” He began drinking heavily, and occasionally Simon would call a detox facility to hold him until he sobered up. “I think she was lenient because deep inside she knew there was something going on, beyond him being an addict,” Borah said.

Simon and DeKnikker, Otto’s mom and sister, were both nurses, so they recognized a turning point around January 2016—he was more paranoid than ever, repeating himself and retreating into isolation. “I knew he had schizophrenia,” DeKnikker said. “I knew he would need to get in trouble to get help, but I never thought he would do something violent.” He was not formally diagnosed. Twice, in May and August of 2016, he was arrested at a bank where he was refusing to leave, as he talked about applying to work for the CIA, and in September, he set off his mother’s home alarm system, with the aim of making a CIA recruiter show up.

Simon wanted her son to be committed to a mental health facility, but South Dakota laws required that he be a danger to himself or others, and as in much of the country there were few resources for those needing mental health treatment. He never saw a therapist. DeKnikker offered him money if he agreed to seek treatment on his own, but he said she’d need to give him a large sum, to pay for the voices in his head. Finally he agreed to treatment, but when it came time to check into a hospital, he changed his mind and refused to stay. “He didn’t verbalize intent to harm himself or others,” Borah said, so he was not committed.

That was on a Tuesday in November. On Sunday, his other sister, Cassandra Otto, left her son Brayden with him and their mother. When she called to check in, she could tell from his tone that something terrible had happened. She sped home. He’d set off the home alarm, so law enforcement officers had already arrived. They asked if anyone needed medical attention, and Otto responded: “Not anymore.”

He went on to claim, falsely, that his mother and nephew had medical conditions and he wanted to “put them out of their misery.” He later told DeKnikker, in her recollection, “It was an order from the CIA, and then he said stuff about Hillary Clinton, and if he didn’t do it it was going to be World War III.” His defense lawyers hired experts who diagnosed him with schizophrenia and schizoaffective disorder.

Prosecutors may contest these diagnoses at trial, but they did not take issue with the judge’s decision that he was incompetent to stand trial. According to reporting by the Argus Leader, Otto had to wait several months for a bed to open up at the state’s only public psychiatric hospital. In December 2018 a doctor at that hospital told the court there was a “substantial probability” Otto would be able to face trial within a year.

Aaron McGowan, the state’s attorney, does not need to formally announce yet whether he is seeking the death penalty, but the case is proceeding as though he will; the defense team is more robust than it typically would be in a non-capital murder case. McGowan declined an interview, saying in an email that “our rules of professional responsibility preclude me from commenting on the case.”

DeKnikker has written him a letter asking him not to seek the death penalty. “Please know that killing another member of our family in no way honors my mom’s life,” she wrote, “and doesn’t reflect anything my mom stood for.”

But Cassandra Otto, Brayden’s mother, wants her brother to be executed for the killing of her child. “I do forgive him, in a way, because I know my mom tried getting him help,” she said when I reached her by phone. “I’m in a phase where I don’t know if he’s faking it or he’s really mentally ill.” But, she added, “I think he should get the death penalty no matter what, because my family doesn’t deserve what happened to us. My sister disagrees, because that wasn’t her kid.” She said her brother “knew what he was doing,” pointing out that he got a knife only after he failed to kill Simon and Brayden with the phone cord. It is easy to imagine prosecutors making a similar argument at trial.

Earlier this year, the South Dakota state legislature rejected a proposal to ban death sentences for people with serious mental illnesses, though it had passed such a proposal through one chamber last year. The Virginia state senate approved a similar bill three months ago. Other bills are gaining traction in Texas, Ohio, Tennessee and Missouri. Some include post-traumatic stress disorder, while others are limited to schizophrenia, schizoaffective disorder and bipolar disorder. Many require active psychosis at the time of the crime. Some would let a judge decide who should be exempted, before the trial begins. The Texas bill would let a jury decide during the trial. The Tennessee bill requires a documented medical history before the crime, which might exclude someone like Otto.

Supporters of these bills, with the backing of the American Bar Association, argue that the “insanity defense” tends to be very narrowly defined, and juries are skeptical of it. The Supreme Court has already banned the death penalty for people with intellectual disabilities and those who committed their crimes before the age of 18. Both bans were based on the idea that society views these murderers as “categorically less culpable than the average criminal.” The high court has ruled that death row prisoners must be “competent” to be executed, though lower courts are still debating exactly what that means.

“Defendants who have a mental illness are particularly vulnerable in our criminal justice system,” Amanda Marzullo, director of the Texas Defender Service, told a panel of legislators in her state last month. “They are very likely to fire their defense lawyers, or not cooperate with them, or even try to represent themselves.”

Prosecutors have been wary. “The version of this legislation that is pending in Ohio would effectively end the death penalty,” said Louis Tobin, executive director of the Ohio Prosecuting Attorneys Association. He predicted that everyone facing the punishment would be able to obtain a diagnosis. A defendant can already mount an insanity defense, he pointed out, and then tell the jury about mental illness as a way of persuading them to vote for life without parole instead of death. Ohio’s bill, as of now, would apply retroactively, potentially setting up lengthy legal fights over old cases.

If Heath Otto goes to trial, the state and the defense will battle over how well Otto understood what he was doing, and what his drug and alcohol use says about his culpability. In the meantime, he lives in a psychiatric hospital. Maddie Borah, his mother’s friend, said she doesn’t visit, because she fears she might trigger him: “If he understood what he did to his mother, he would probably try to commit suicide.” She sees the entire situation as an indictment of the way our society treats those with severe mental health problems: “It’s much easier to kill a mentally ill man than to admit your mental health system, your law enforcement, your policies and procedure are so inept.”