We asked incarcerated people to weigh in on the biggest issue facing the country today. Here is what they said. 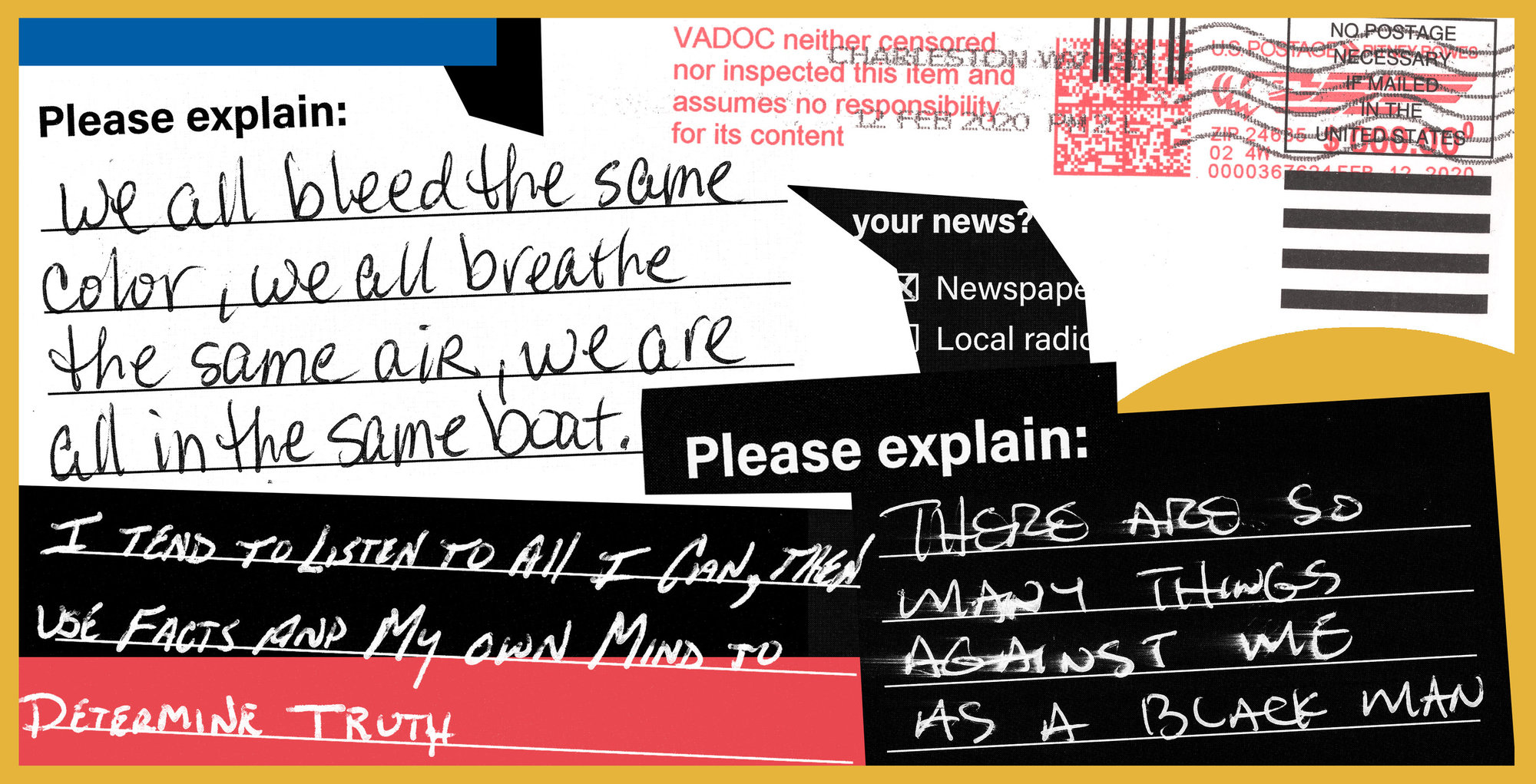 In our first-of-its-kind political survey inside prisons, The Marshall Project and Slate asked respondents three open-ended questions: What do you think is the most important problem facing the country today? How much does your race affect your political views? Have your political views changed since being incarcerated?

The Marshall Project partnered with Slate to conduct the first-of-its-kind political survey of prisons and jails across the country. Read more about Trump's incarcerated supporters, how prison can change your political outlook and how one man became politically engaged in Louisiana’s Angola prison. Here's more on how we did it.

Respondents told us how they’ve relied on—and sometimes come to disagree with—opinions of friends or family members. One man told us, for example, that his mother read him the news over FaceTime. Some said they had become more political just by virtue of having more time to read the news—one wrote that he primarily got his news from NPR’s “Wait Wait Don’t Tell Me” and “Saturday Night Live’s” Weekend Update. The more than 8,000 voices behind the statistics expressed nuanced and provocative thoughts on the state of the world. (This survey was distributed in December, before several candidates dropped out.)

Here are some of their answers.

We asked: What do you think is the most important problem facing the country today?

Taking GOD out of the society. Everybody searching for something to be offended by. And revisionist historians.

Democrats slapping the face of 63 million people who voted for our president. Why? Because they refuse to submit to him.

The political divide. I am confused by the different information between CNN and FOX. I am not greatly educated or informed on a lot of political issues. As I try to engage as much as I can from here I feel thwarted by this. How can half of a seemingly rational and educated society hold opposite views of reality?

People getting punished for an addiction rather than giving them help.

I’m transgender and have tried to get the treatment I need to prevent me from suicide. If I had been incarcerated in eleven Democratically held states, I would have received that treatment with little problem, but I’m in Kansas, a tea party Republican state and I’ve had to fight tooth and nail for every little bit of treatment I’ve received.

China’s build up of their military, and global warming.

Mass incarceration. The way we treat each other once locked up. We are still a part of the community. … Most of the men I have met in prison, including myself, need help maturing. Not [to be] treated like we are broken and disposable.

Reparations for black people. We need our money.

Pollution is a major problem that doesn’t get recognized enough, from the garbage in the ocean to the garbage on land.

Hunger should not exist in this country. I am in prison and eat better meals, etc., than 65% of the world population!!!

Too many white people.

Lack of empathy for our fellow man. Political tribalism at the expense of the greater good. Lack of vision.

The corrupt, fascist government we live under. Especially in New Jersey.

Home grown terrorism. Mass shootings are becoming such a problem with the only proposed solution being to violate our 2nd Amendment.

Teens growing up without their parents, lost in prison systems, and following their footsteps.

If other countries want our help, they should surrender and become part of the U.S. Otherwise fix your own problems.

Pay inequality is a big problem. If you can’t take care of yourself legally you will resort to the means necessary to do so!

Not enough police on the streets. We need the Armed Forces on every block.

Race! This country doesn’t really like to discuss its history on the black race. Yes, things are a little better, but not nearly enough to calm the tension that’s been going on since the capture of this country.

The rise of white nationalism and the imbalance of power. The New Jim Crow. The unbridled institutionalization of people of color.

For a country which is so rich to have so much homeless is a shame. Everyone should have a place to call home, a job, a meal without begging, etc.

The wrong president in the White House. Need to try a female.

We asked: How does your racial identity inform your political views in prison?

I was born Native American and at one point in time we were looked at as heathens and savages. It’s hard because no matter what’s in the history books it reminds all of us about the times when we were treated unfairly. … I still follow the news. The crazy thing is I know who the president is, but if you ask me if I knew my social security number, I couldn’t tell you.

America will never accept any race as an equal to white people.

I feel that being white puts more stress on me to be more aware of how I view what goes on around me. I personally may not have caused the injustice, but I feel it IS my duty to fix or at least not add to the problem.

I feel like because I’m brown I should be on guard because all this hate toward my Mexican heritage.

I grew up American so I don’t allow color to influence my opinions.

Personally, maybe because I’m a white midwestern American, I never really questioned race as a factor in my politics. Even in prison I’m still not sure even why it SHOULD be a factor. ... I am willing to acknowledge that minorities of all kinds face special pressures (I myself am LGBTQ+ and know that all too well), but we must come to view the issues, not as one race or another, but as one people, one nation, or we consign ourselves to an endless cycle of division.

I’m not sure but I believe if you’re white it goes a lot further in here.

I am a white, American citizen, born and raised in rural Maine. I have never experienced racial injustices or biases. My political views have nothing to do with my race.

My racial identity is very strong coming from a Mexican family. All the laws Trump is trying to pass with border security it’s turning, well in my opinion it’s turning other races against us and giving them a reason to look differently at us.

As a black man I’m considered guilty no matter what.

I am half Hispanic and with the President that’s currently in office I feel that he is a racist against the Hispanics. I feel he done Puerto Rico terribly wrong and this stupid wall on the border is a waste of money.

I identify as a transgender and nothing is for us at all.

Because I’m black, it’s harder. We’re viewed as bad people regardless, drugs was put in our communities intentionally to destroy the black community, we don’t have access to the same education or resources as whites … we don’t get any other options other than prison, which almost never solve the problems, but make a man worse, because of the hardships of gaining employment or housing due to having a felony.

Honestly never thought about it. I know back in the day before I was born blacks couldn’t vote.

We asked: How have your political views changed since being incarcerated?

At first I was always pro-Democrat even though I’m not a Democrat I just used to like what they did for the people now all they do [is] lie. … It seems like all the Democrats cared about is impeaching Trump and now that it happened they seem like they don’t know what to do next.

I wish I still mattered.

Even as a member of the LGBTQ+ community, I was far more socially and financially conservative prior to incarceration. I now support a number of societal reforms, especially in the areas of healthcare, education, and justice reform that I did not support before. I still consider myself a Republican, though what one might call a “Purple Elephant.”

I used to think the Democratic party was for black [people]. Then I realized their party is responsible for mass incarceration for blacks.

I want to vote now.

I always wore the Democrat hat. Since being locked up I have come to realize my beliefs, ideals and opinions actually are Republican. I am a believer in upholding our Constitutional rights first and foremost.

You have a lot more thinking time and a lot of things don’t make sense.

I used to be a Democrat, however while in prison I’ve had the time on my hands to actually study and zero in on who does what. Democrats talk a good game and make huge promises they never meet. In my opinion Republicans are the ones that get their hands dirty and actually get things accomplished. … Actions speak louder than words and when I think of the Republican party I think action when I think of Democrats I think nothing but words.

I used to think Donald Trump was a good president. Now after reading the newspaper I think he has misused the office and should be impeached.

The Dems have taken more of my rights away through the crime bill that Pres. Clinton signed which took my appeal rights away. This allowed the courts and the justice system to get away with too much.

The laws are set and I have no say so in them being passed or denied.

Most of my family is Republican. I only voted once before coming to prison, but when I did, I voted Republican. After coming to prison, I started taking college courses, and started seeing the world differently. I started voting Democrat, even though Bill Clinton, a Democrat, was responsible for the 1994 Crime Bill, which ended the federal Pell Grant program for incarcerated people. I guess I’ve been hoping that the Dems would come around, see the folly in the war on drugs, and tough on crime movements.

I was a criminal chasing money. I was hedonistic, self-serving, and a master bullshitter. I did not pay attention to what was going on outside my sphere. I started paying attention to world happenings around 30 years ago.

I am now a socialist.

I almost didn’t have a political view when I got locked up. But since then I’ve been forced to be around people who are very different from me both “racially” and culturally. And I’ve noticed that while there are many differences between my life and theirs, there are many many more fundamental similarities than differences. We all love our families and want to vote for officials who are going to do the best for them since our lives personally are pretty much toast now.

Sanders supporter in Arkansas
The Marshall Project partnered with Slate to conduct the first-of-its-kind political survey of prisons and jails across the country. Read more about Trump's incarcerated supporters, how prison can change your political outlook and how one man became politically engaged in Louisiana’s Angola prison. Here's more on how we did it.