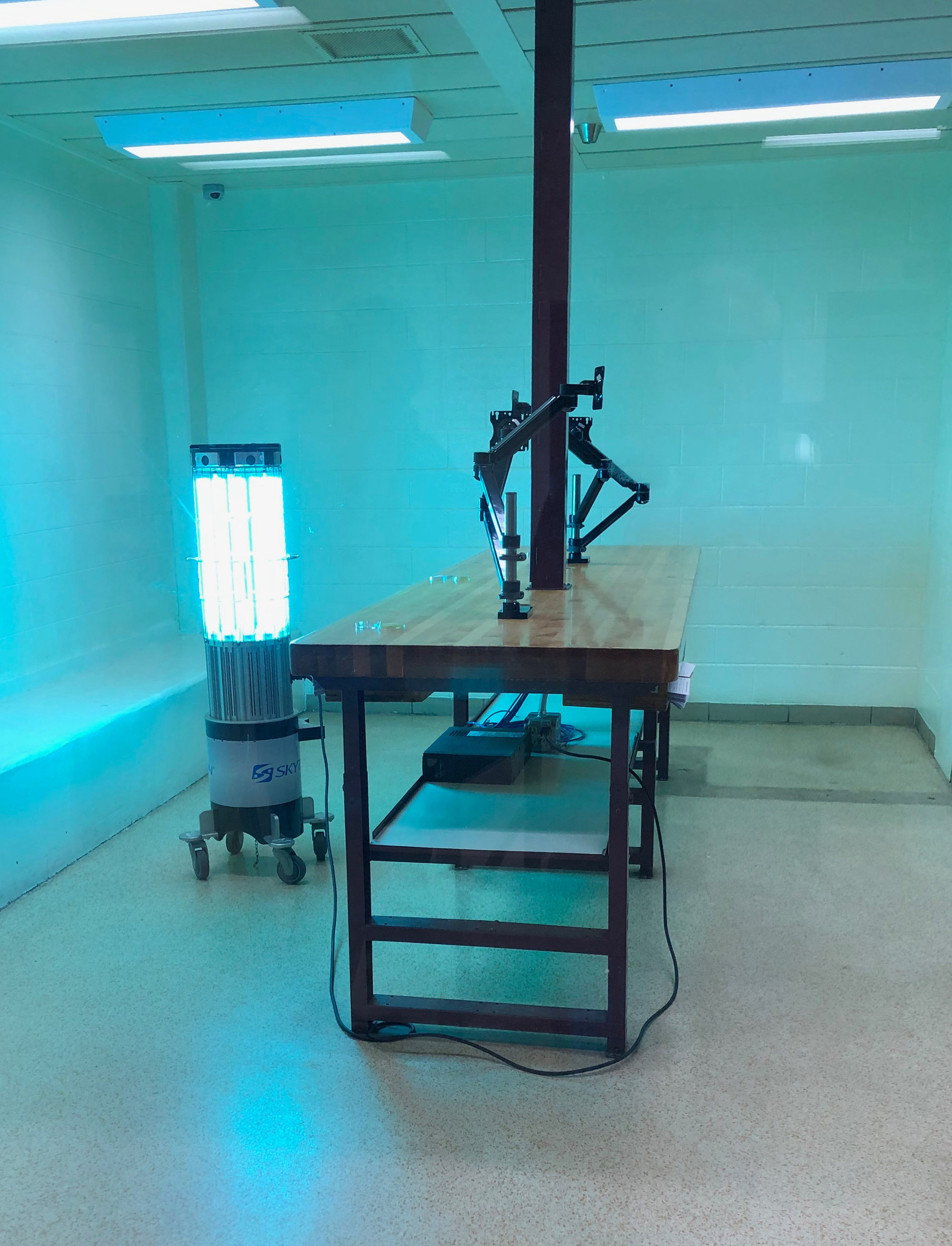 At the Dane County Jail in Madison, Wisconsin, robots that look like fancy space heaters have rolled from room to room 24 hours a day, seven days a week, since the end of March. The devices emit high-intensity ultraviolet light, a technology that can destroy viruses including swine flu and SARS (severe acute respiratory syndrome).

Sheriff Dave Mahoney bought the pair of UVC emitters, which cost about $80,000, shortly after the coronavirus pandemic hit, and was reimbursed through a federal FEMA grant the county received for COVID-19 expenses. Now, the robots target everything from solitary cells to eating utensils. Mahoney says he’s had 40 cases at the jail so far after testing the roughly 450 prisoners and 600 staff who work there, a level of infection that he believes would be higher if not for the robots.

“There is so much nasty stuff in the jail,” Mahoney said. “Once you clean a room, it’s only as good as the next person who comes in. That’s why we do it around the clock.”

Prisons and jails, where social distancing is nearly impossible, are epicenters for COVID-19 infections, and corrections officials have struggled to find ways to stop the spread. So they are increasingly turning to UVC technology typically used by hospitals to reduce the organisms that contribute to new infections.

At the Dane County Jail in Madison, Wisconsin, a robot that emits ultraviolet light is behind a tarp, which is used to protect people from exposure to the machine’s powerful rays.

Many lock-ups rely on the people incarcerated there to scrub them down, often with diluted and alcohol-free products. That can keep cleaners from getting intoxicated or injured, but can also make disinfection more difficult.

The Marion County Jail in Indianapolis, Indiana, used bleach as a disinfectant before the pandemic, said Col. James Martin. But it wasn’t always possible for prisoners to leave it on surfaces, such as walls, long enough to work. Now, Martin says, in addition to chemical disinfection, officers run the UVC machines, which the county bought at the end of April.

“We were fighting hard water, dirt and grime,” he said, “but now we’re fighting something totally different.”

Martin said he and others at the jail first learned about UVC during an Indiana Sheriff’s Association meeting last fall where they met with representatives from Skytron, a Michigan-based company that manufactures UVC disinfection systems and other equipment for major hospitals, including the Cleveland Clinic.

Last year Skytron began to pursue a foothold in the prison and jail market, attending conferences and supplying machines to jails for free demos, said Larry Perez, a company vice president. “I began to think, why aren’t we sharing this with other places in our community?” Perez said. “One of the dirtiest places you’ll step foot in is a jail.”

That strategy has paid off, Perez said. Skytron’s UVC sales to jails more than quadrupled in April, going from 11 jails to a total of 48. Perez said several state prisons have also ordered units, which cost between $40,000 and $80,000.

Morris Miller, the chief executive of Xenex, which makes UVC robots, said he’s also noticed more interest from police departments and jails. Last year, the company made its first such sale when the LAPD purchased a UVC machine, which cost about $100,000, after an officer contracted typhoid fever.

Companies are pitching new coronavirus-fighting products for lockups, including a machine that sprays an atomized disinfectant mist, which has been adopted by prisons in Connecticut and North Carolina, and a humidifier that a promoter said was being used to combat the virus in 83 unnamed prisons and jails across the country. Studies have shown that the influenza virus does not spread as easily in humid environments.

But UVC, which is also referred to as UVGI (for ultraviolet germicidal irradiation), has the advantage of a long track record. For decades, municipal water plants have used UVC to sanitize water. Hospitals nationwide are currently using UVC to decontaminate equipment, including N95 respirators. There is also a growing reliance on UVC disinfection outside of hospitals, including in New York City’s subway cars and the floors of Pittsburgh’s airport.

Nevertheless, its use is largely unregulated and there are no uniform standards to measure performance. “Right now it’s just whatever anybody wants to say,” said Meredith Stines, CEO of American Ultraviolet and a member of the International Ultraviolet Association, which is pushing for standardization in the industry. There are a range of UVC products, including hand- held devices, that are much less expensive than the robots, which are manufactured by about a dozen companies nationwide, Stines said, adding that some products aimed at consumers don’t deliver on the level of disinfection they promise.

An officer at the Jefferson County Jail in Madison, Indiana, uses a handheld device to operate a machine that emits strong ultraviolet light, which is being used to disinfect the jail in the fight against coronavirus.

Researchers are studying the impact of UVC light specifically on the coronavirus that causes COVID-19, and some studies have shown it’s probably as effective on this virus as on older ones like SARS.

Despite President Donald Trump’s floating ultraviolet light as a possible coronavirus treatment for people, the intensity of UVC rays that are required to kill viruses and other germs are dangerous to humans and could burn skin and eyes.

“This is promising technology for jails, as long as you don’t expose the prisoners or anybody to this light directly,” said Steven DenBaars, a professor at UC Santa Barbara who specializes in ultraviolet LED light. He said he has seen an increase in funding for research into UVC and is expecting guidelines on the use of this technology in public spaces from the National Institutes of Health soon. NIH has already put out guidelines for the use of UVC to disinfect personal protective equipment.

Experts say UVC should be used in conjunction with other cleaning efforts, and is not a silver bullet. “What this does, is it gives an additional layer of security, because we’re people, and people will miss spots when cleaning,” said Shawn Gibbs, Dean of the School of Public Health at Texas A&M University.

UVC companies said the robots are high priced because they emit more powerful rays and can automatically assess a room’s size, which allows the machine to estimate the correct dosage of light required to be effective. Robots also come with a variety of safety features, including an auto shutdown function if a person goes in the room while it’s on and door motion sensors to detect people trying to enter.

The Kent County Sheriff’s office in Grand Rapids, Michigan, reduced its spending on chemical cleaning agents so it could afford to buy a UVC robot. It is seeking reimbursement through a Bureau of Justice Assistance federal grant, Sheriff Michelle LaJoye-Young said.

The 1,400-bed jail has so far had just two positive cases of COVID-19, even though Michigan has one of the highest positive case counts in the country, according to data from John Hopkins University. LaJoye-Young partially credits the new robots for keeping the virus out, alongside reducing the jail’s population by about 350 people.

“We have to approach this from all angles,” LaJoye-Young said. “You can’t just clean your way out of this.”

Dane County’s Sheriff Mahoney said he believes UVC is an important tool that he’d like to see other prisons and jails embrace. As incoming president of the National Sheriff’s Association, Mahoney said he plans to distribute a white paper to law enforcement nationally about “the benefits of investing in this technology to keep deadly organisms out of jail populations.”

Mahoney says he’s already shared his enthusiasm for UVC with other sheriffs across Wisconsin, who have followed his lead and also bought UVC emitters. He said he has no ties to any UVC businesses.

“I’ve sold more of those machines for them than their salesman,” he said with a laugh.

Alysia Santo is a staff writer. She has investigated criminal justice issues including for-profit prisoner transportation, the bail industry, victim compensation and the sexual abuse of people behind bars. Her reporting has spurred state and federal investigations, and was awarded Harvard’s Goldsmith Prize for Investigative Reporting in 2021. She is also a three-time finalist for the Livingston Award and was twice named runner-up for the John Jay College/H.F. Guggenheim Prize for Excellence in Criminal Justice Reporting.