“When people are in need, they don’t give a shit where you’re from or what your history is.” 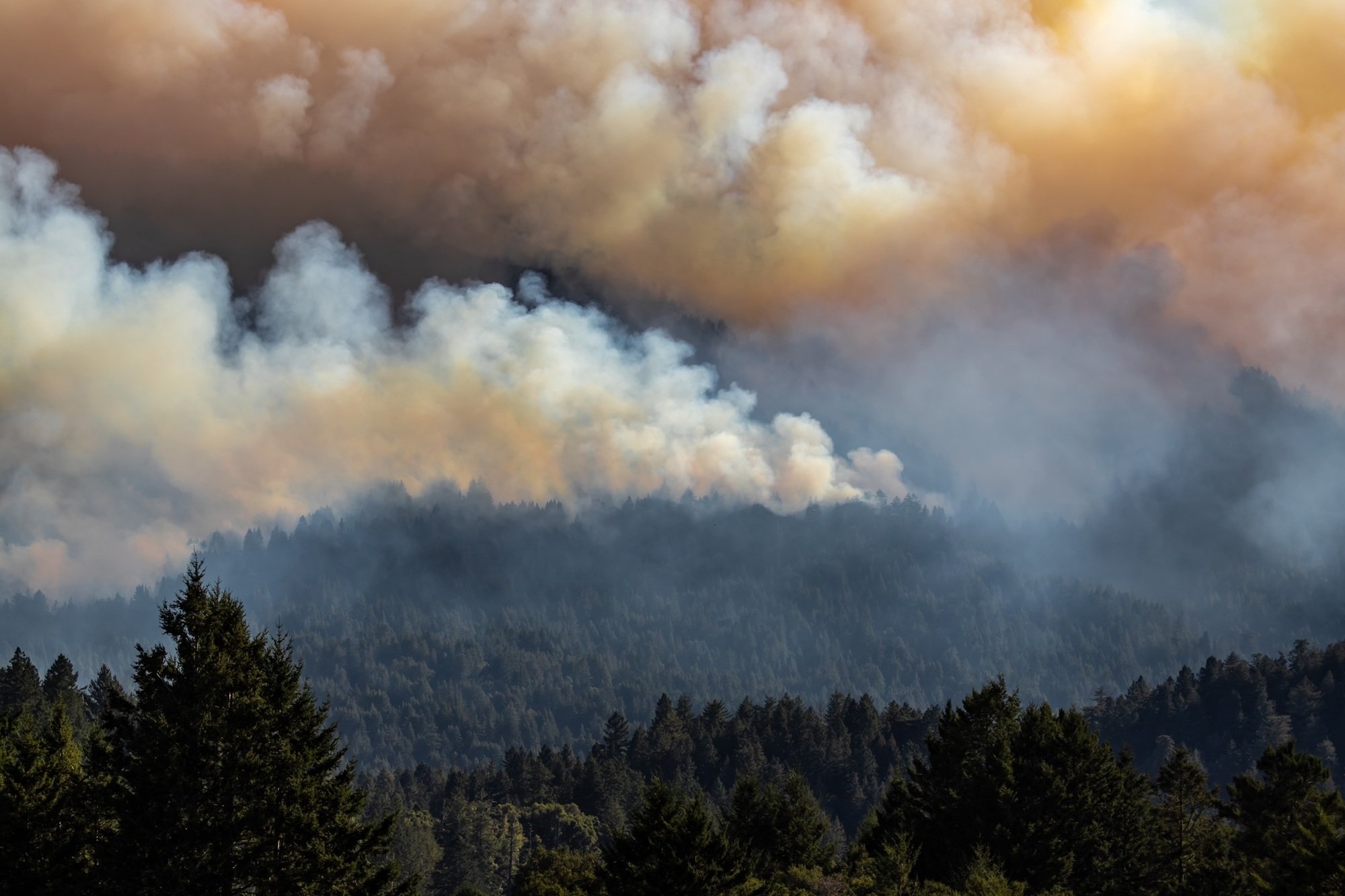 California firefighters have been battling unprecedented blazes and staffing shortages this wildfire season. Before the pandemic, thousands of the state’s wildfire crews came from state prisons—incarcerated people can make around $1 an hour containing fires, clearing brush, and doing other dangerous labor. But since COVID, many incarcerated firefighters have been released early.

This article was published in partnership with Slate.

That shortage has called attention to the state’s reliance on prison labor to fight fires, and to a longstanding critique of the program: how hard it is for those same people to become professional firefighters once they’re free. Jobs in city fire departments often require a stringent background check. Getting hired in wildland firefighting, while not off-limits, is a challenge for people navigating re-entry on top of probation or parole. Recent efforts by the state and by groups like the Forestry and Fire Recruitment Program, created by formerly incarcerated firefighters, are working to change that. This week, the state assembly passed a bill making it easier for some people who served on prison fire crews to clear their record and get an emergency medical technician license; the proposal is now awaiting the governor’s signature.

Despite the obstacles, many have found a way to use their fire skills post-prison, even if as a volunteer. Several people who have been battling California’s wildfires this summer shared their stories with The Marshall Project:

A counselor came to my cell door and asked, “Do you want to be a wildland firefighter?” My initial response was no. I remember watching ‘Backdraft’ as a child and telling my mom, “I know I don't want to do that.” I started talking to folks and realized it was the best-case scenario: highest paying job, access to better food, closer to my family and I’d be out in the community. So I decided to go do it. I grew to love the job so much that when I was about to be paroled I asked the corrections staff and fire chief, “How can I do this once I get home?” All of us were perplexed—we didn't know how. 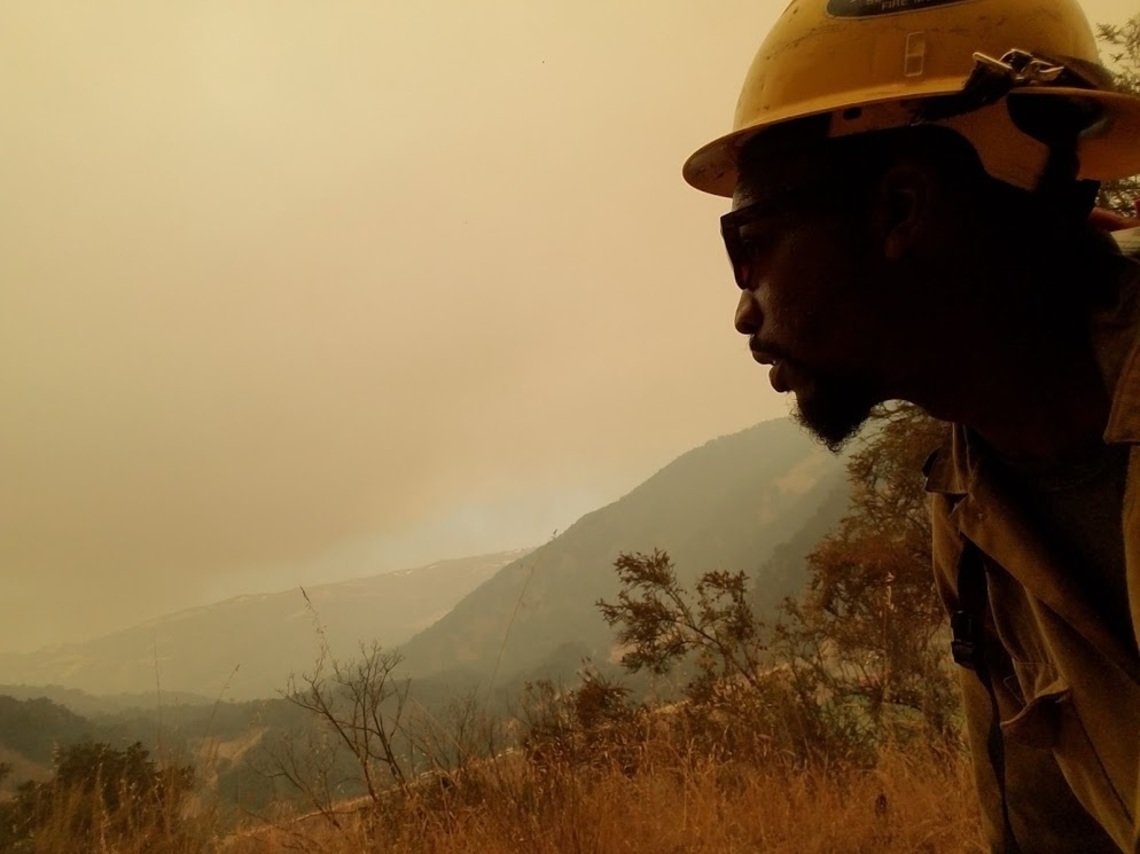 Brandon Smith worked as a crew supervisor trainee at the Soberanes Fire in Carmel, California, in Aug 2016.

You typically see the same type of people in these jobs: white men from rural communities. I did a round of calling hella fire agencies, hella stations, turned in so many applications. I didn’t realize most of those things I wasn’t qualified for. I got hired when [then-California Gov.] Jerry Brown declared a state of emergency in 2015. The battalion chief for the forest service in Big Bear, a Black woman, gave me a chance. Because of the state of emergency she had her discretion to hire me. 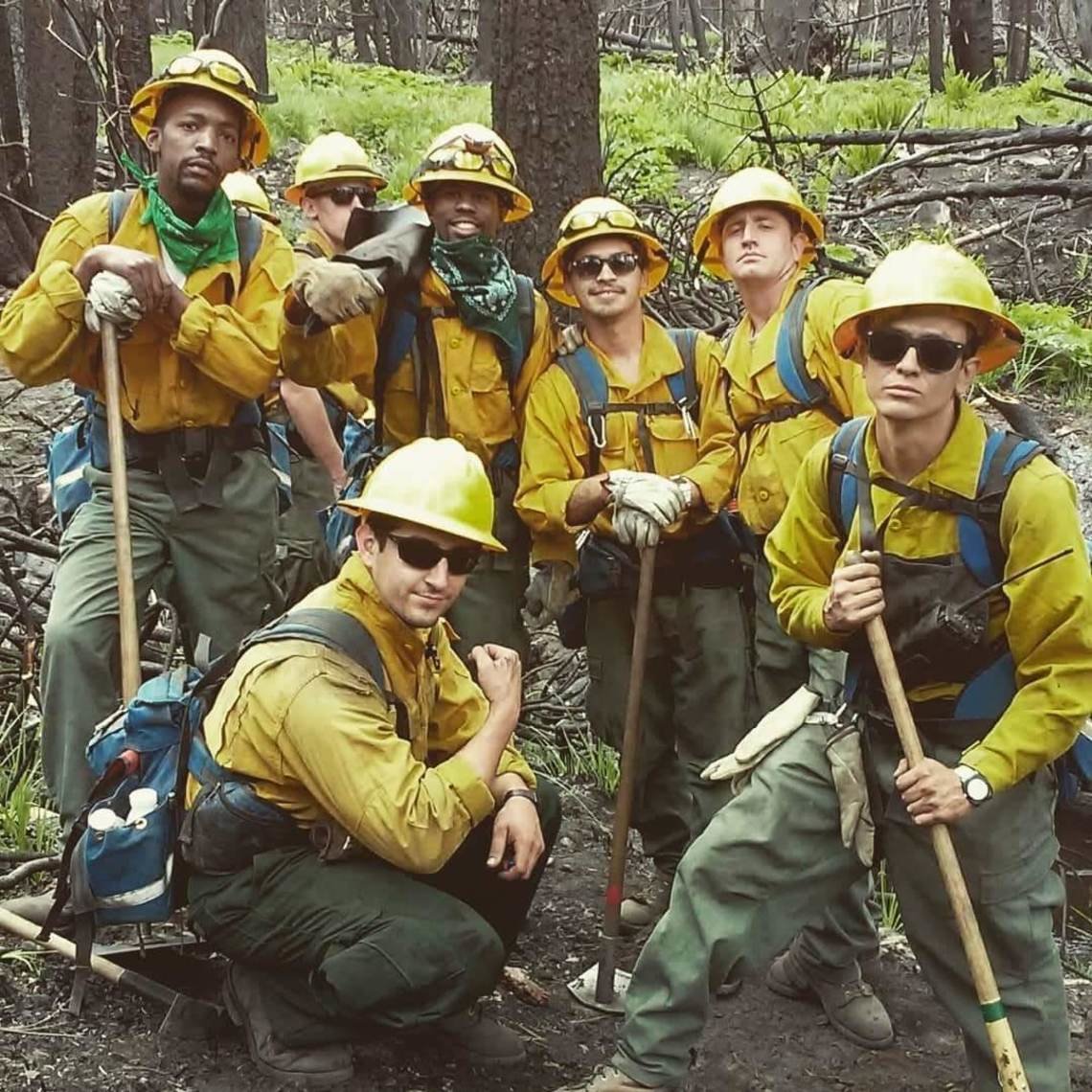 Brandon Smith, left, and members of a fire crew fought the Lake Fire in the San Bernardino National Forest in California in July 2015.

On my first fire working professionally, I looked over and saw my same crew [from prison] on the fire. They were doing double takes. Everyone was like, “What?! I thought this couldn’t happen.” Now we go to all the fire camps and training centers in California. We say, “Look bro, you can actually do it. Here’s how.”

We’re launching four crews [of mostly formerly incarcerated people] doing fire prevention and post-fire clean up work. They’re going to receive $15 an hour and get on-the-job training. They’ll be with us for six to 16 months depending on parole or probation. And then they’ll transfer to a professional job. We partner with homeowners associations, local fire safe councils. We’ve been running since 2015, and we've helped over 80 people get jobs.

[Gov. Gavin] Newsom comes out here and says, “We don’t have enough staff to attack this.” But we received the same training that a firefighter would get. We’re equally eligible to go do the job. Just normalize a pathway. You already use these people.

Wildland firefighter and Corpsmember with the California Conservation Corps

I’m at California Conservation Corps in Camarillo. It’s a [paid training] program that can help younger people get certification. We were on quarantine for the beginning of the season. As soon as we were cleared, the next day we were going to a fire, a 2,800-acre fire from a lightning strike. It was pretty gnarly. I’m on a hand crew. When [the fire is] reduced to being able to have human bodies in there, the hand crews go to the fire’s edge and construct a “fire line,” using chainsaws and other hand tools to cut the brush and trees back. It is extreme physical labor. 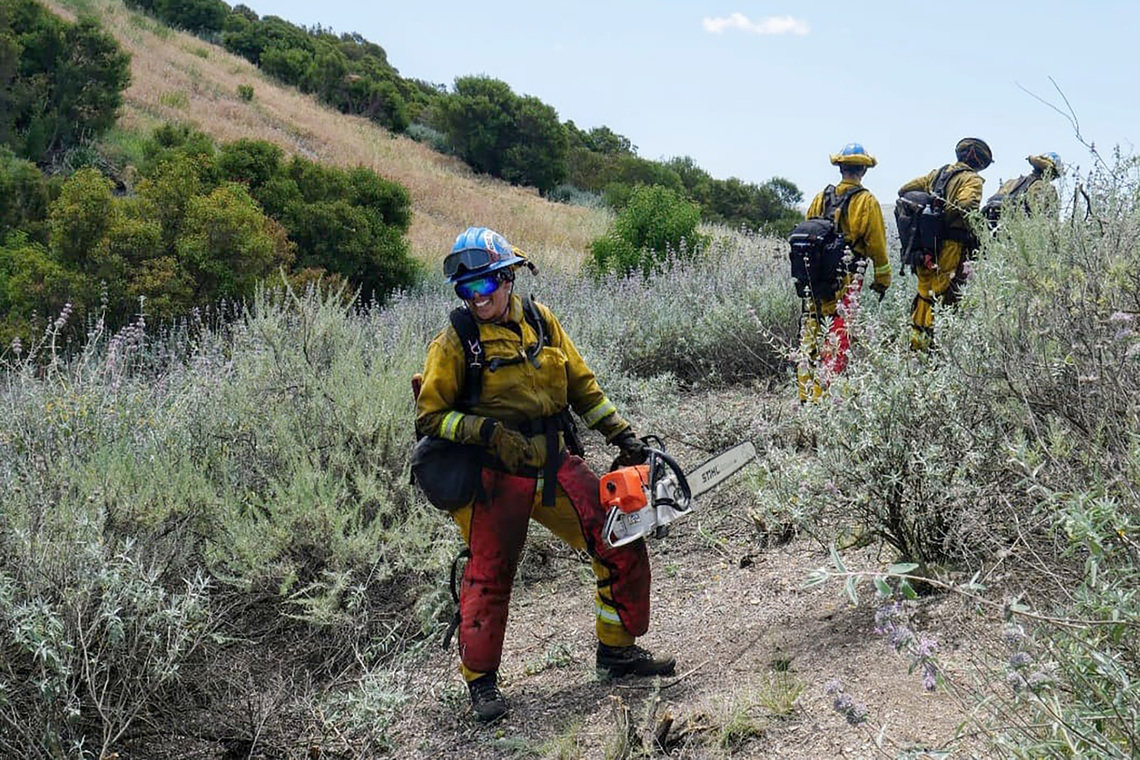 I got out in November of 2018. While [on a prison fire crew] they don’t give you certification, they just use you. I went through the exact same training you would get if you were free. Yes, I made a choice that sent me to prison, but I still did all this work for Californians. When I went to fires I made $1 an hour, but I owed restitution so I was making 45 cents an hour. 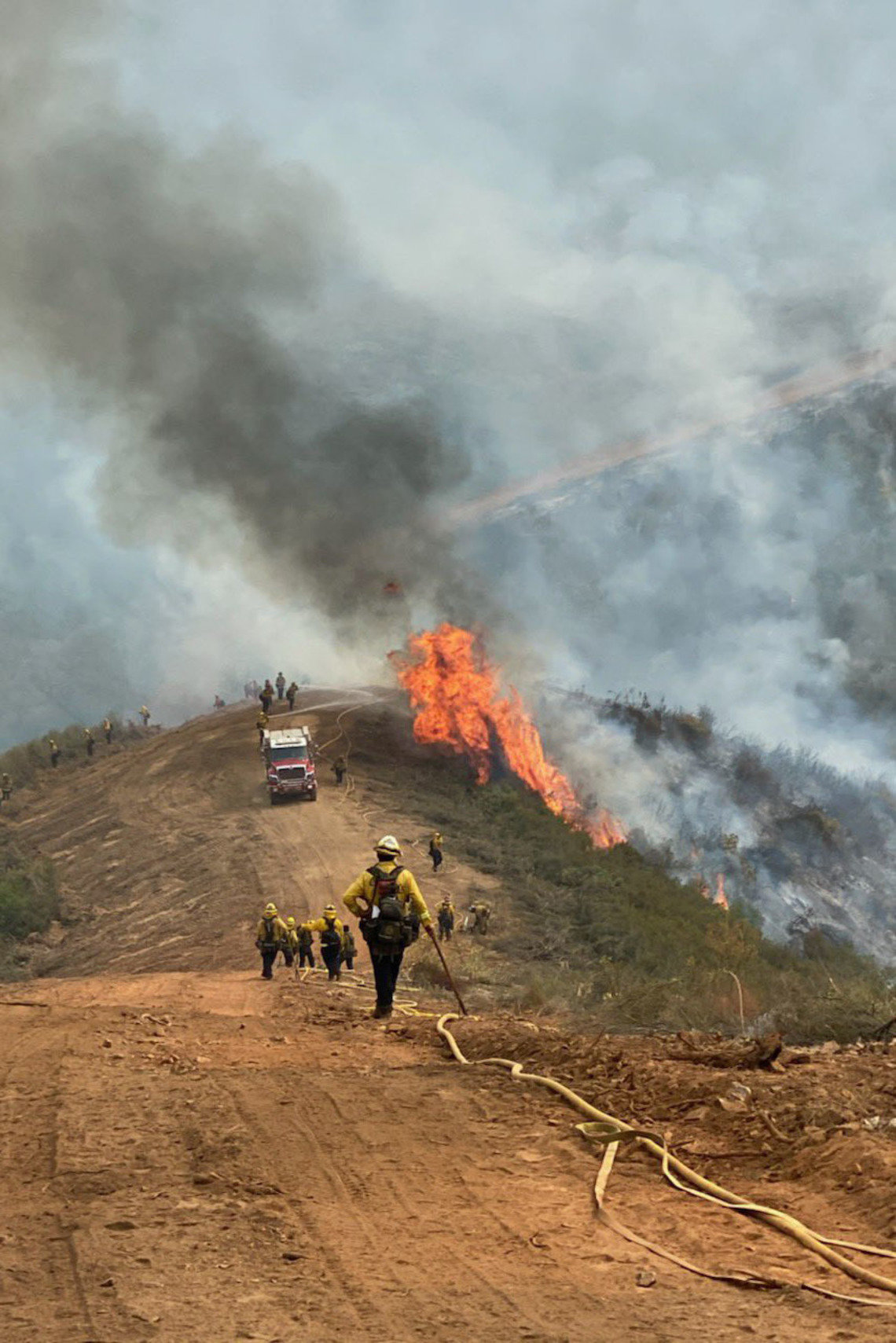 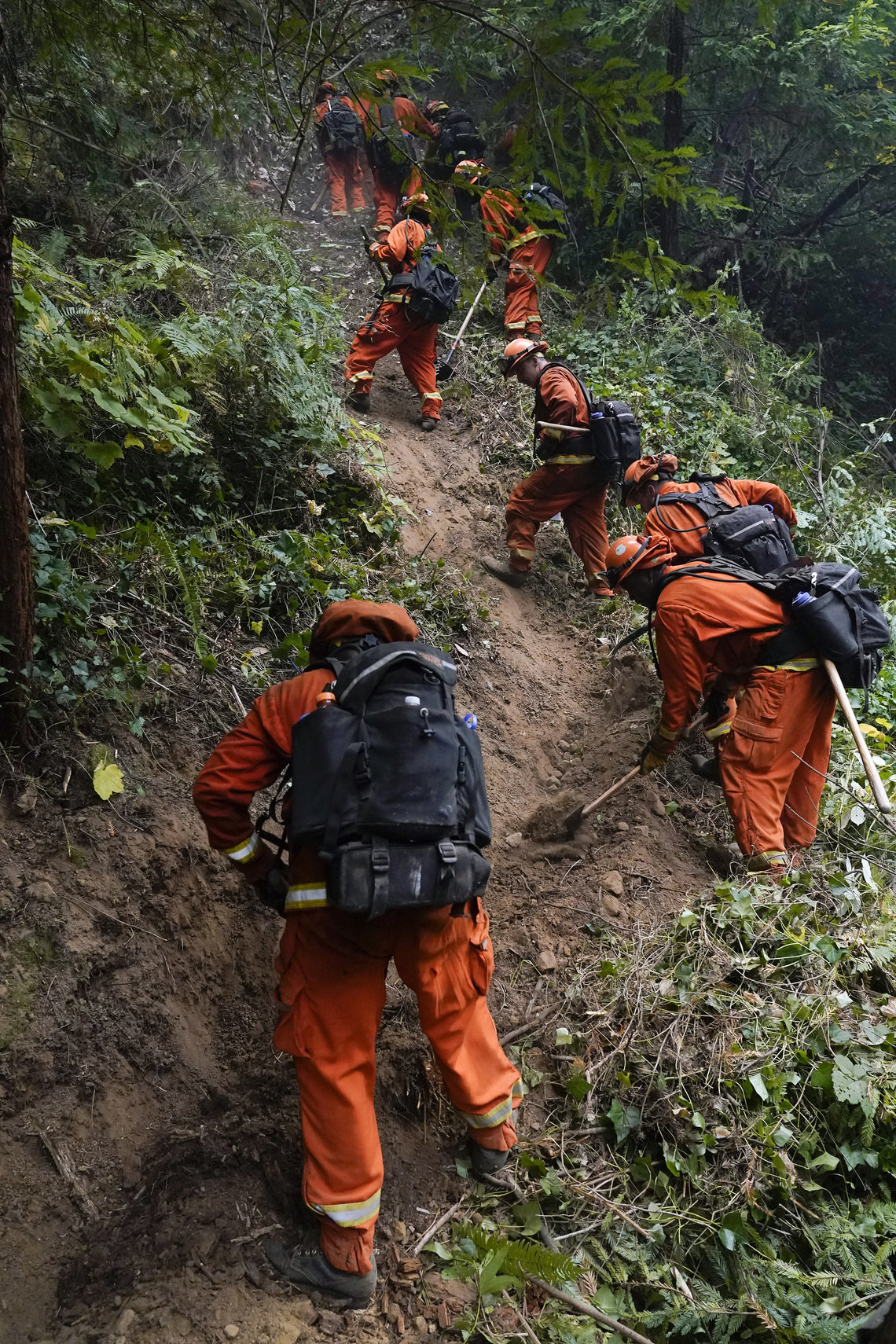 I didn’t think I could do it after I got out. [I think] I am the first person at my center to be on parole. And I [think] I’m the only female on a wildfire crew [here]. There’s a training center right next to where I’m at [in Ventura] that houses parolees and works them on fire crews. But I’m not allowed to go to that program because I’m a woman. So I have to work with my parole officer to actually do this. If I ever leave the county, there’s someone here that emails my parole officer how long I’ll be out, where we’ll be, who my direct supervisors are, then there’s a travel pass that’s created for me. It’s a whole, long list of things that I have to do.

I remember my first fire. It was a small one, an acre and a half behind a house in San Diego County. We get to the house, and you just see black everywhere. Smoke traveling up the slope of the hill right into your face. You’re trying to hike down, trying not to eat the smoke, snot running down your face, eyes burning. The adrenaline is rushing, you can’t breathe. That was my first realization that this is a job. This is real.

Former prison wildland firefighter who has worked with community volunteers

I’m not a firefighter. I’m an electrician. This is not what I do. But I spent a few years in fire camp [while incarcerated]. I was driving home from work around the mountains [on Aug. 20] when I got close to the fire, and I heard the saws of the hand crews going. It just brought back some somatic memories for me. Thinking, “Man, I know what they’re doing out there.” So I drove home, I got on Twitter and said, “I am an able-bodied former wildland firefighter looking to pitch in where I can.” A couple hours later I got contacted by someone in Bonny Doon. A handful of people who were formerly incarcerated [reached out] who wanted to help, but they couldn’t get in at that point because of barricades. A Twitter friend up in Solano County was willing to come, but he’s still on parole so he couldn’t drive more than 50 miles. 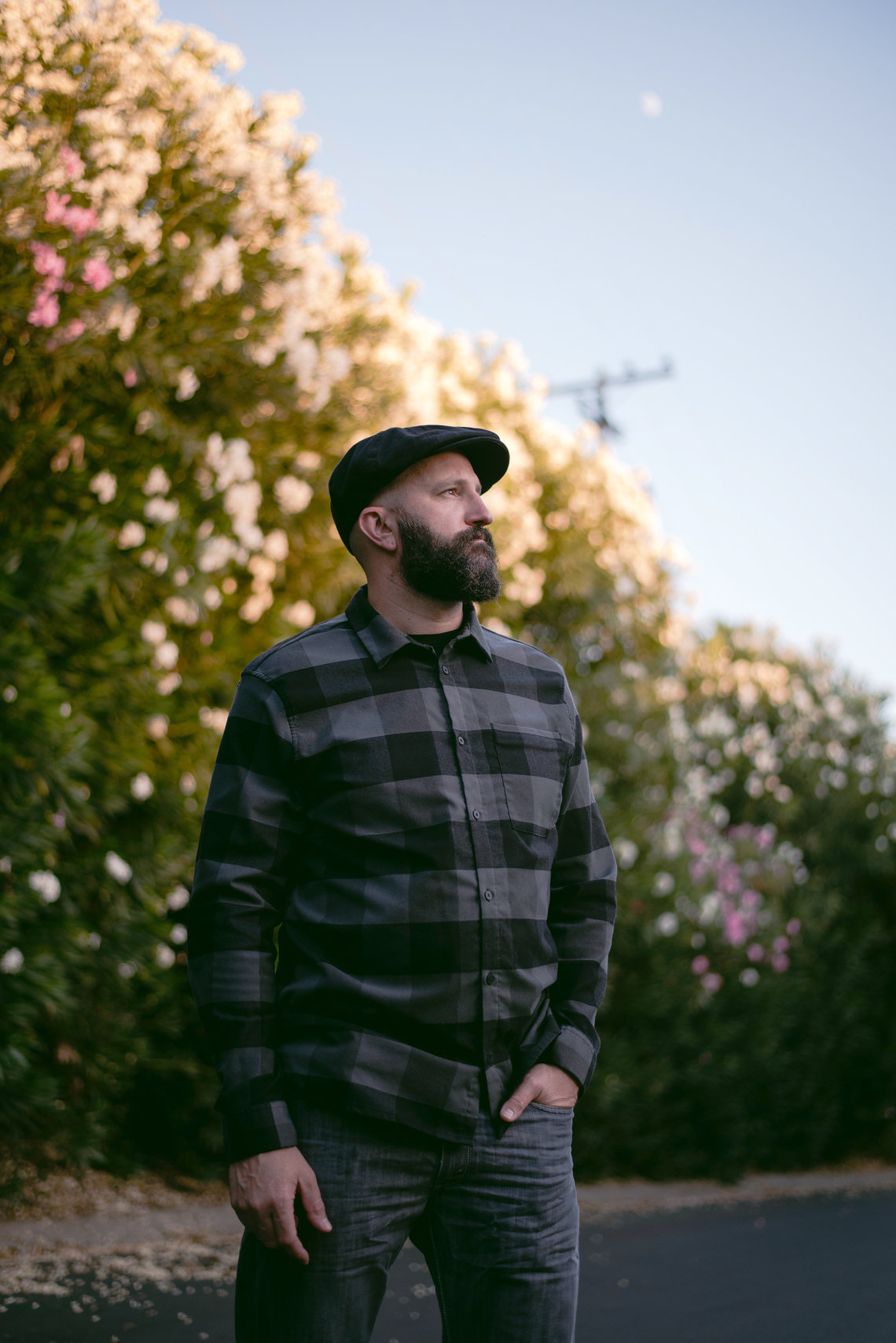 Matthew Hahn used the firefighting experience he gained in prison to help local volunteers in Bonny Doon, California, when wildfires broke out in August.

Marissa Leshnov for The Marshall Project and Slate 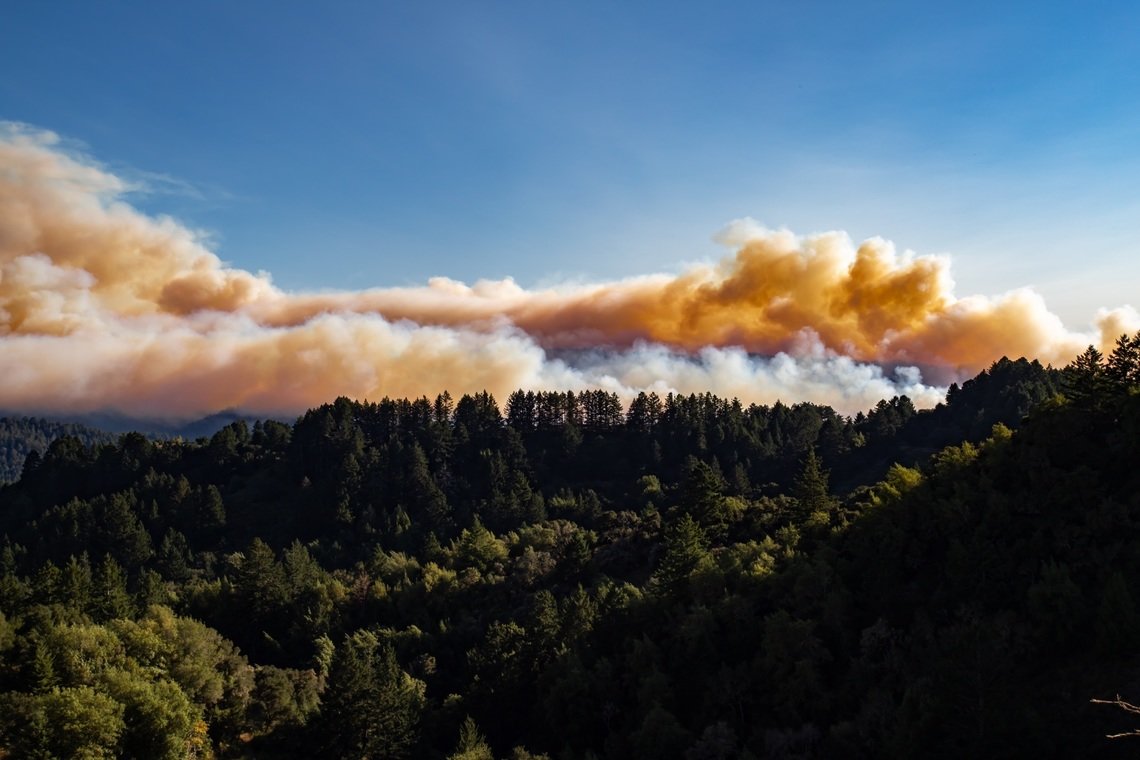 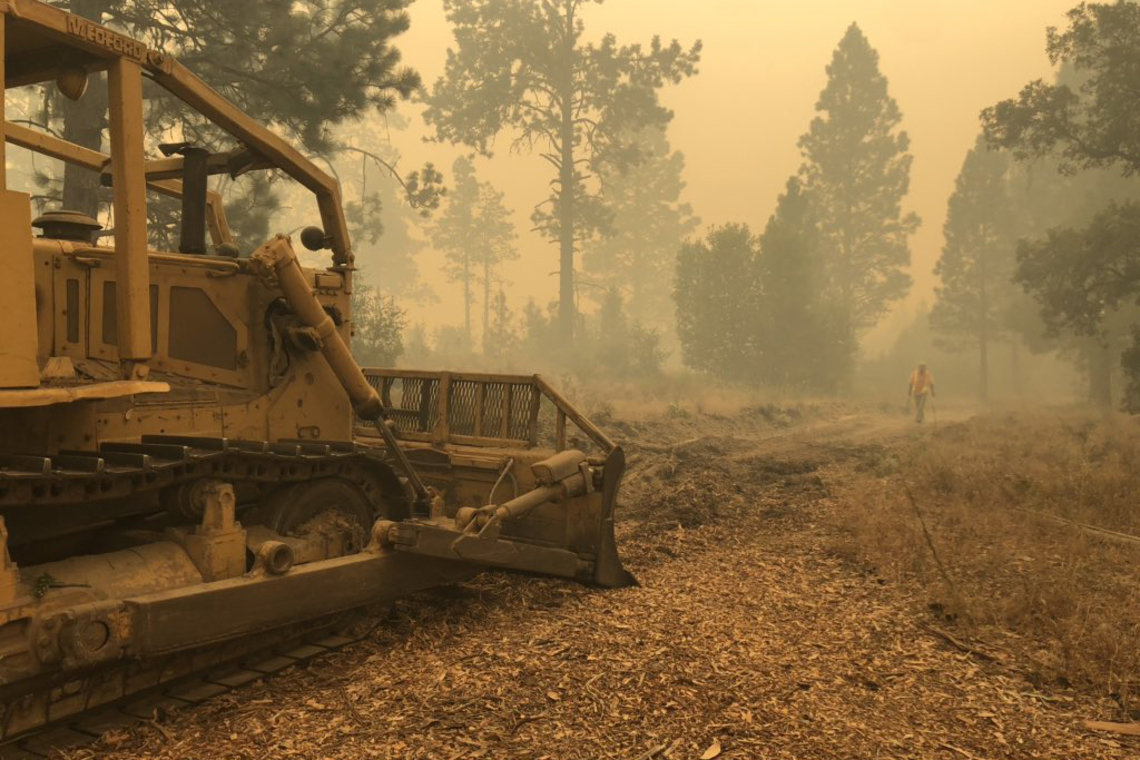 The CZU Lightning Complex fire, as seen from La Honda, California, on August 19, 2020. Matthew Hahn Matthew Hahn and volunteers from the Bonny Doon, California, community built a fire break in August. They scraped the earth to mineral soil so the fire cannot burn past it. Matthew Hahn

We’re getting help from all these other [states and countries] which is great, we need it. But leaving aside all the politics, taxpayers paid to have thousands of people [in prison] train to be firefighters, to show up to disasters exactly like what’s happening right now. And they’re sitting at home. Fire season is lasting longer. Fires are getting bigger. We need more people.

Matthew Hahn captured these scenes as he and other volunteers tried to protect homes and other property in Bonny Doon, California. Courtesy of Matthew Hahn

I think there’s a ton of people who are already paroled who would love to become a firefighter. I saw it in the enthusiasm I got from people offering to come out—they had the little itch I had when I heard the saws. If there was ever a time in which the public and the legislature and the governors and the fire departments themselves would be amenable to loosening the restrictions, it would be now. 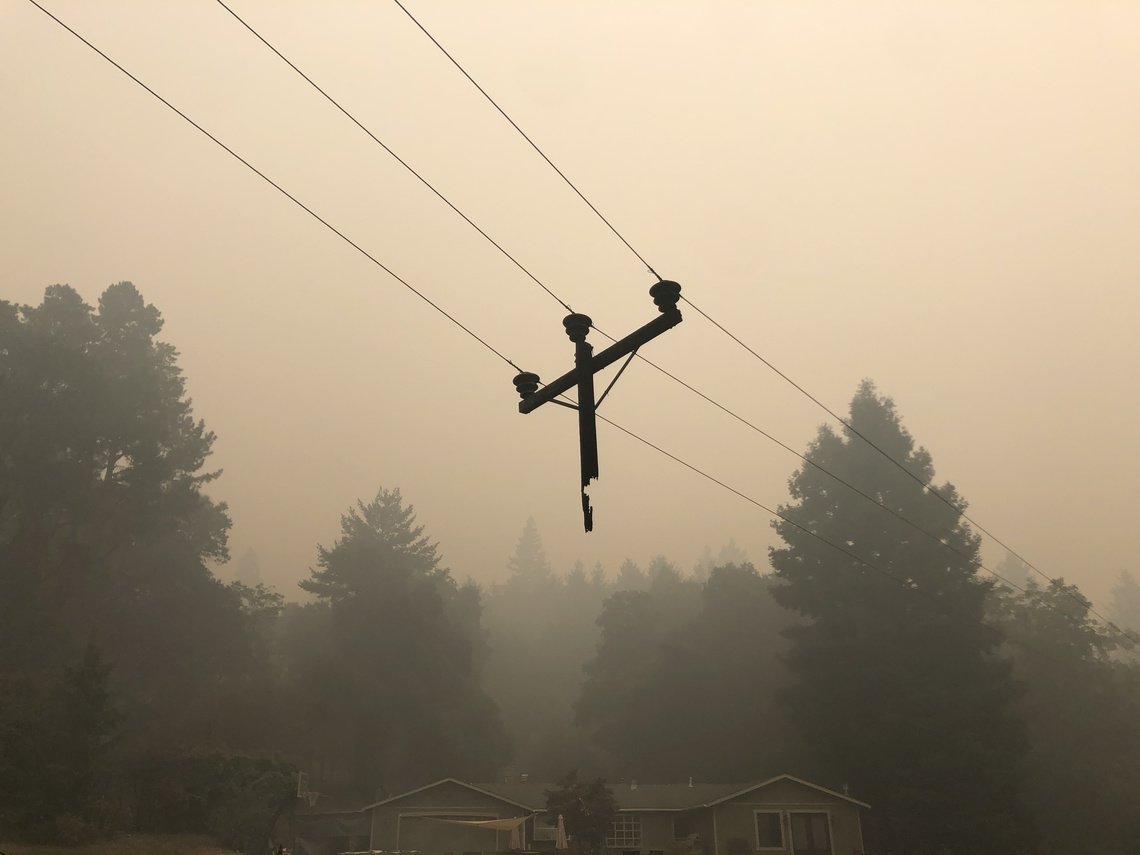 The remains of a burned power pole, off Molina Drive in Bonny Doon, California, on August 22, 2020.

It reminds me of the first big fire I went on, in Santa Barbara in 2009. I remember coming down the mountain when we were leaving, and all the residents were piled on the side of the road cheering. They had signs that said, “Thank you firefighters!” When you look in the mirror when you’re incarcerated, you see the words written on your shirt that say CDCR prisoner. You get treated a certain way by guards. It’s easy to believe it. There’s an element of starting to assimilate the notion of being less than, that I deserve the distrust I’m regarded with. It generates a lot of self-loathing and a sense of worthlessness. And a lot of a sense of unlovability. I think there’s an element of redemption that happens when you’re a prisoner firefighter, because you’re getting thanked. Somebody’s calling you a hero. Every time we showed up at a fire and the people there saw us, I’m convinced we changed at least one mind. When people are in need, they don’t give a shit where you’re from or what your history is.

Correction: A previous version of this story mistakenly said California Gov. Jerry Brown declared a state of emergency in 2005. It was in 2015.