Would a Death Sentence Help The Parkland Families Heal?

Outrage around the school shooter’s sentence reveals tensions between what some victims’ families want and the justice system’s limits. 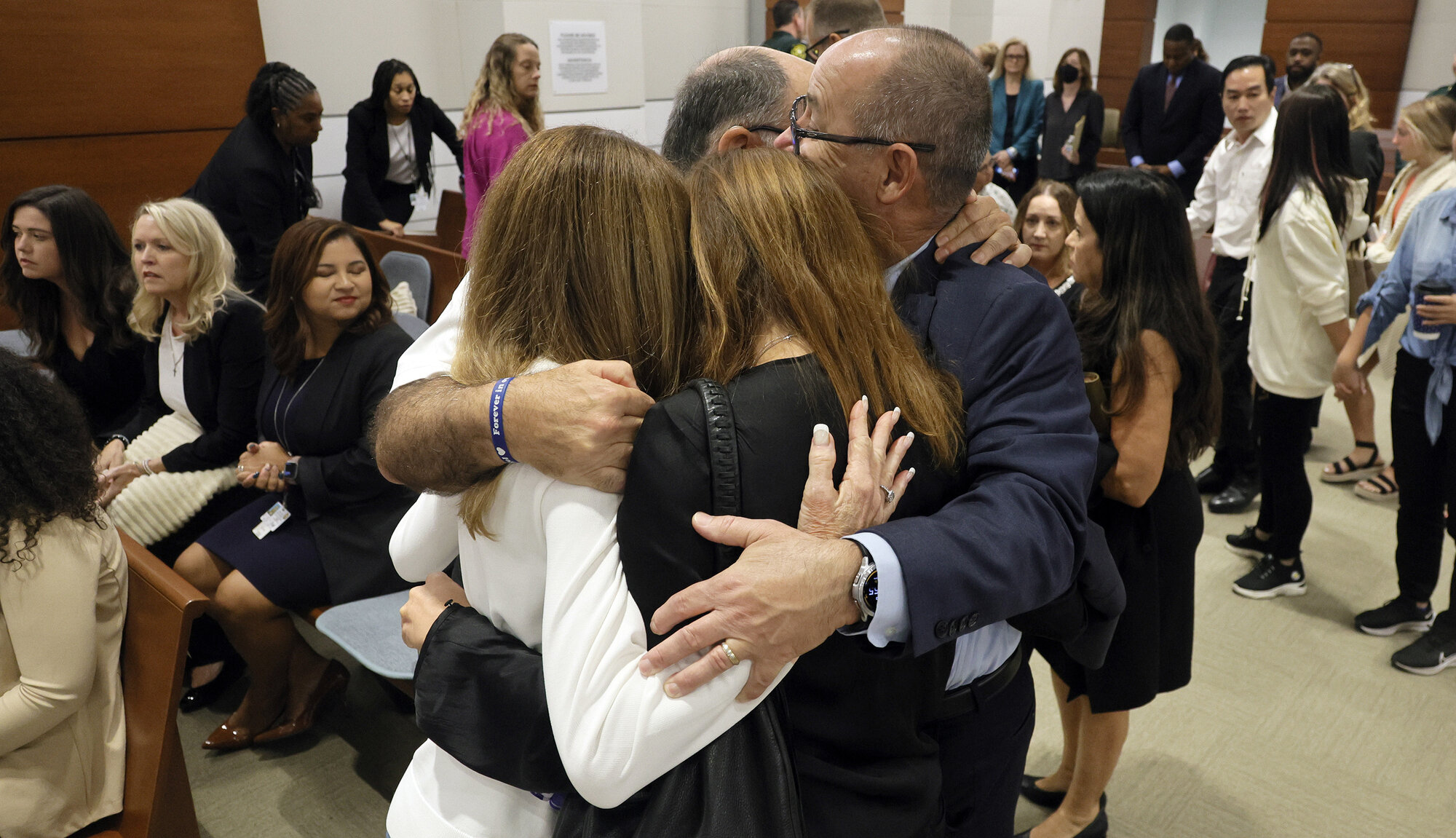 Family members of students killed in the mass shooting at Marjory Stoneman Douglas High School in Parkland, Fla., including Linda Beigel Schulman, Michael Schulman, Patricia Padauy-Oliver, Fred Guttenberg and others, arrived to hear the sentencing verdict in the trial of Nikolas Cruz. Pool photo by Amy Beth Bennett
By Maurice Chammah
The death penalty is in flux. These are the stories that you need to know about capital punishment's past, as well as its uncertain future.

After a Florida jury voted to sentence Nikolas Cruz to life in prison earlier this month for the murders of 17 people at Marjory Stoneman Douglas High School, news coverage focused on the disappointment and rage of his victims’ families. Many of them wanted the death penalty, and some will speak in court at his sentencing on Nov. 1.

Cruz’s trial featured days of defense testimony about his adversities, including his mother’s drug and alcohol use while he was developing in utero. That was his right — the Supreme Court long ago said, when the death penalty is on the table, juries must consider the whole person, not just the single crime — but it left the impression that Cruz had won a sympathy contest. “This jury failed our families today,” Fred Guttenberg, the father of Jaime Guttenberg, told reporters. Soon after, Florida Gov. Ron DeSantis suggested that state law, which requires a unanimous jury vote for death, might be changed to “be better serving victims of crime, and the families of victims.”

Victims’ families have never been systematically polled, but there is an assumption among reporters (which I used to share) that they usually want the harshest available punishment. Over the last decade, while interviewing dozens of family members of people whose killers faced the death penalty, I’ve come to see that this simply isn’t true, and that treating victims decently means avoiding assumptions about what they want.

Focusing our outrage primarily on what happens to the perpetrator lets society and the justice system off the hook, distracting us from other ways we’re failing to help them. The Parkland families are still struggling in their political efforts to stop gun violence. In other cases, victims wanted to meet perpetrators face to face, or get answers about the crime that will help them heal, or sue gun manufacturers. My Marshall Project colleague Alysia Santo has reported on how victims struggle to get public money for counseling and other needs.

And some just don’t want to keep being asked about the worst day of their lives. I know that because they’ve told me so, before declining an interview and hanging up the phone.

There also hasn’t been much research on whether the death penalty benefits such families, except for a landmark 2012 study by Marilyn Armour and Mark Umbreit, which drew on interviews with 40 families of murder victims. Half were in Minnesota, which does not have the death penalty, and they demonstrated “higher levels of physical, psychological and behavioral health,” than the other half in Texas, which has carried out far more executions than any other state in the last half century.

The Minnesotans described feeling more control, particularly during appeals, which were usually over within two years, meaning they could put more energy into healing. In Texas death penalty cases, by contrast, the long and unpredictable appeals process “generated layers of injustice, powerlessness, and in some instances, despair,” the scholars wrote. (Lawmakers and judges have tried to limit appeals, but this can create a different problem: innocent people trapped on death row.)

Every time a case returns to the news, families have told me, they are forced to revisit the initial events, and some said executions inevitably mean that the perpetrator becomes the protagonist of media coverage, rather than their loved one.

In colonial America, victims played a major role in pursuing cases against perpetrators, paying officials directly to make arrests and prosecute. Our modern justice system sought to balance the interests of victims against those of society, but by the 1970s, many victims were feeling that their needs were being ignored, and they started organizing, eventually earning the right to give statements in court, get better updates on a defendant’s path through the system and in some states even witness executions.

Popular culture has long promoted the idea that what victims need is revenge — think of movies like “Death Wish” and “Kill Bill” — and in the 1990s, the death penalty came to be seen as a public service to those left behind. At a 1992 oral argument, Supreme Court Justice Antonin Scalia said one of the purposes of retribution was “to prevent people from taking justice into their own hands, saying the State will avenge you; you need not avenge yourselves.”

Eventually, the criminologist Franklin Zimring argued that the death penalty had been transformed, symbolically, into a “victim-service program.” In 1996, Texas began letting victims’ families witness executions. Robin Kelley, whose brother and sister were murdered in Houston in 1988, was among the first to take this opportunity, and told me the experience transformed her father from a grief-stricken shell to his old, affable self. “The bowling ball attached to the back of his neck was gone,” she said.

But this shift also placed pressure on family members: if they don’t embrace the harshest possible punishment, they may feel like they are wounding their loved one’s memory. The defense lawyer Walter Long has written that family members can feel obligated to take a position on the death penalty, with disagreement “further isolating some family members who may be shamed for favoring or opposing the sentence, depleting the best available resources for recovering from trauma within family systems.”

Families who admitted they didn’t want the harshest punishments felt neglected by politically ambitious prosecutors. Jeanette Popp, whose daughter was murdered in Austin, Texas, in 1988, told me that after she shared her opposition to the death penalty, prosecutors stopped informing her of court dates.

Even if we were to respond to the Parkland verdict by making it easier to give the death penalty, how would we handle disagreement, or personal ambivalence? In Parkland, Robert Schentrup, the brother of victim Carmen Schentrup, opposed the death penalty for Cruz. So did Michael B. Schulman, the father of victim Scott Beigel, writing in a 2019 Sun Sentinel essay that the death penalty would put the family through too much trauma. But after the trial, he reconsidered: “This animal deserves to die,” he told The New York Times. It’s not uncommon for family members’ views to change over time; sometimes after the execution, they decide that life in prison would have been preferable.

And still others don’t want the pressure or responsibility of deciding the punishment. “I don’t actually think whether we believe in the death penalty should have any bearing on what happens,” Suman Cherry, the widow of Jonas Cherry, told me for a story on the 2006 murder of her then-fiance. “Let’s say we all got up at trial and said what we thought … and the jurors would have to decide who is suffering more. That’s not how it should work.”

Although prosecutors can and do let victims’ families inform their decision about whether to seek the death penalty, jurors aren’t supposed to let those wishes influence their decision; there has long been a fear that a victim’s perceived attractiveness, social class or race might unduly sway a jury.

Officially, we’ve set up our legal system to balance a grief-stricken loved one’s cry for retribution against society’s other goals, which include rehabilitation and careful constraints on who receives the harshest punishment. If we didn’t, we’d be executing thousands of people each year. In the last half century, there have never been more than 100 people put to death in a year across the country, and the numbers keep dropping.

But many still want our system to better serve victims. If that is really the goal, victims and their advocates have told me again and again that we should be asking what it is they actually need, beyond long prison sentences and execution — and how we as society can provide it.