Why So Many Jails Are in a ‘State of Complete Meltdown’ 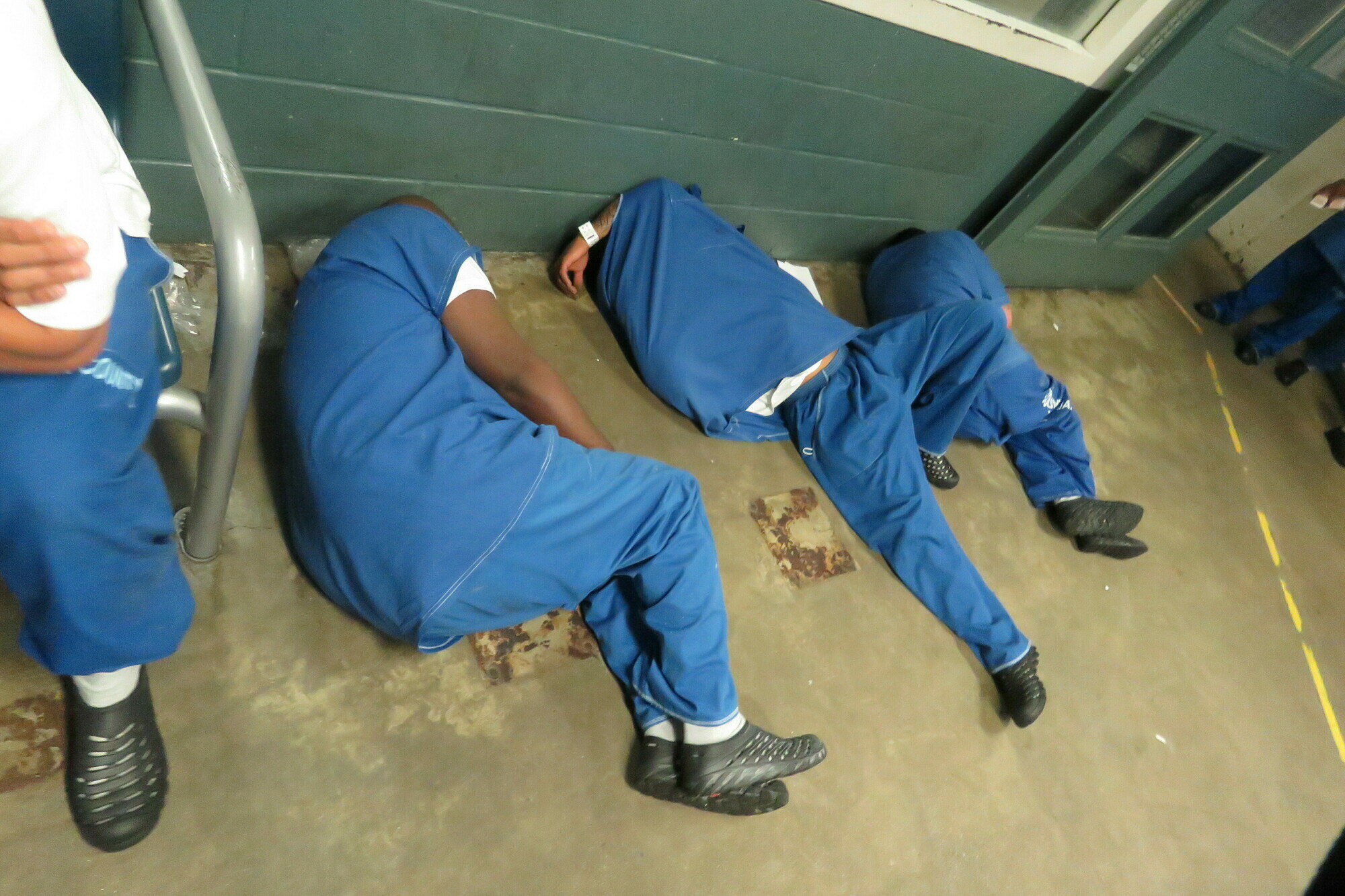 People slept on the floor of the Los Angeles County jail in August. A lawsuit accuses the jail’s staff of chaining detainees to chairs for days at a time amid overcrowding. American Civil Liberties Union
By Keri Blakinger
Additional reporting by Ken Miller in Oklahoma City, Claudia Lauer in Philadelphia and Rachel Dissell in Cleveland

In California, lawyers accused staff at the Los Angeles County jail of chaining mentally ill detainees to chairs for days at a time. In West Virginia, people held in the Southern Regional Jail sued the state, saying they found urine and semen in their food. In Missouri, detainees in the St. Louis jail staged multiple uprisings last year, while in Texas, a guard at Houston’s overcrowded Harris County Jail said she and her coworkers had started carrying knives to work for fear that they wouldn’t have backup if violence broke out.

And while the infamous Rikers Island jail complex in New York City has been the focus of media coverage for its surging number of deaths, rural and urban lockups from Tennessee to Washington to Georgia are not faring much better.

In other words, America’s jails are a mess.

“It’s hard to believe, but it seems jails are even more wretched than usual these last few months,” said David Fathi, director of the American Civil Liberties Union’s National Prison Project. “Having worked in this field for 30 years, I don’t remember any other time when there seem to be so many large jails in a state of complete meltdown.”

Several lockups denied claims about deteriorating conditions or did not respond to requests for comment. A few, including Rikers, acknowledged problems such as infrastructure issues, detainee deaths and high staff attrition.

“We are working hard to stem the rippling effect of years of mismanagement and neglect within our city’s jails,” a spokesperson for the New York City Department of Correction, which runs Rikers, said in a statement. “Turning our jails around requires a collaborative effort, transparency and time.” 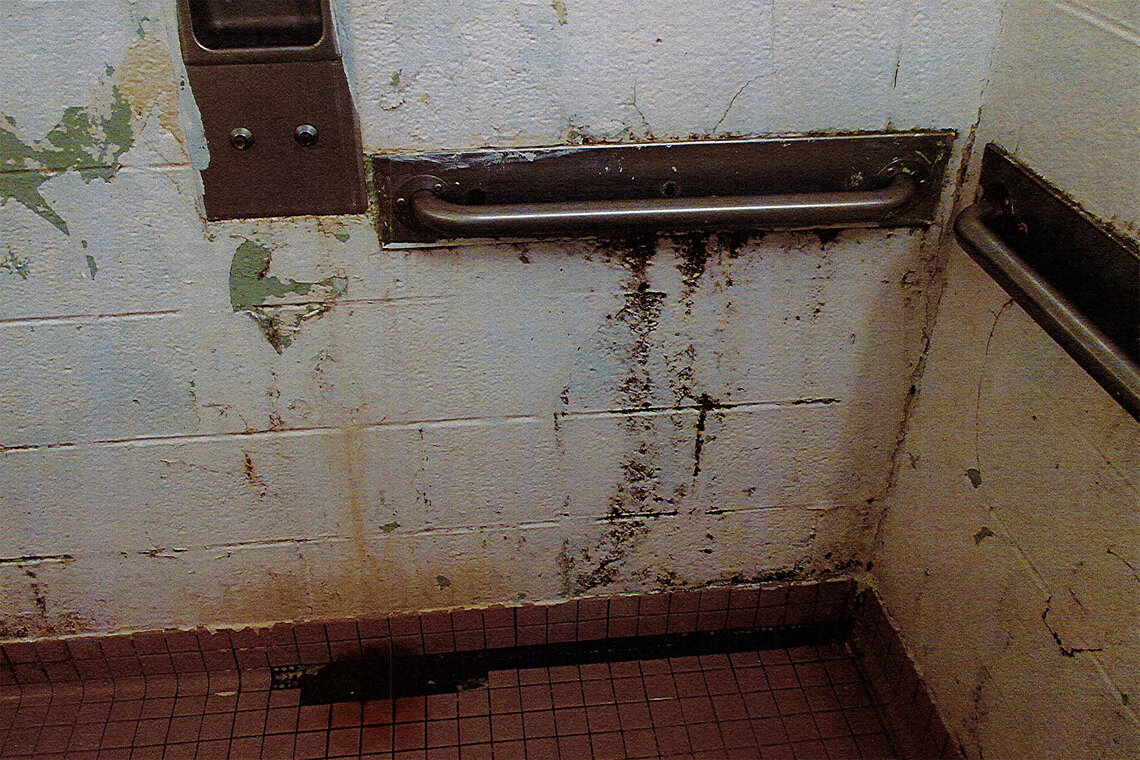 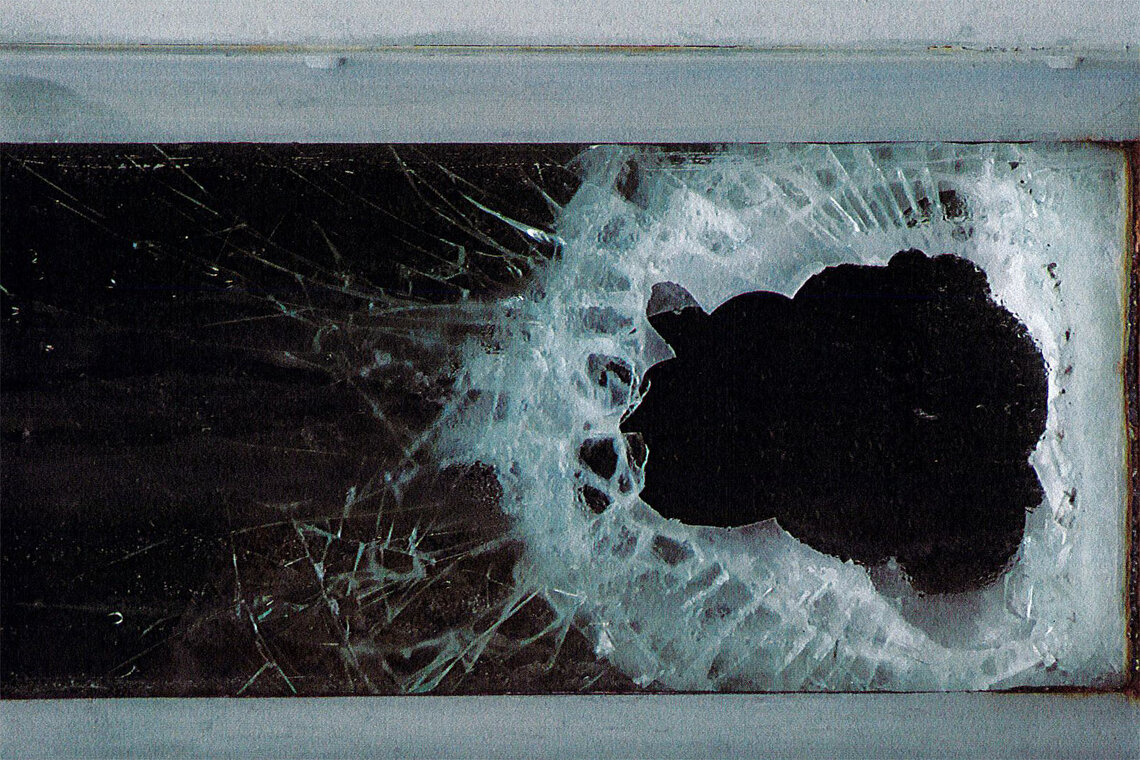 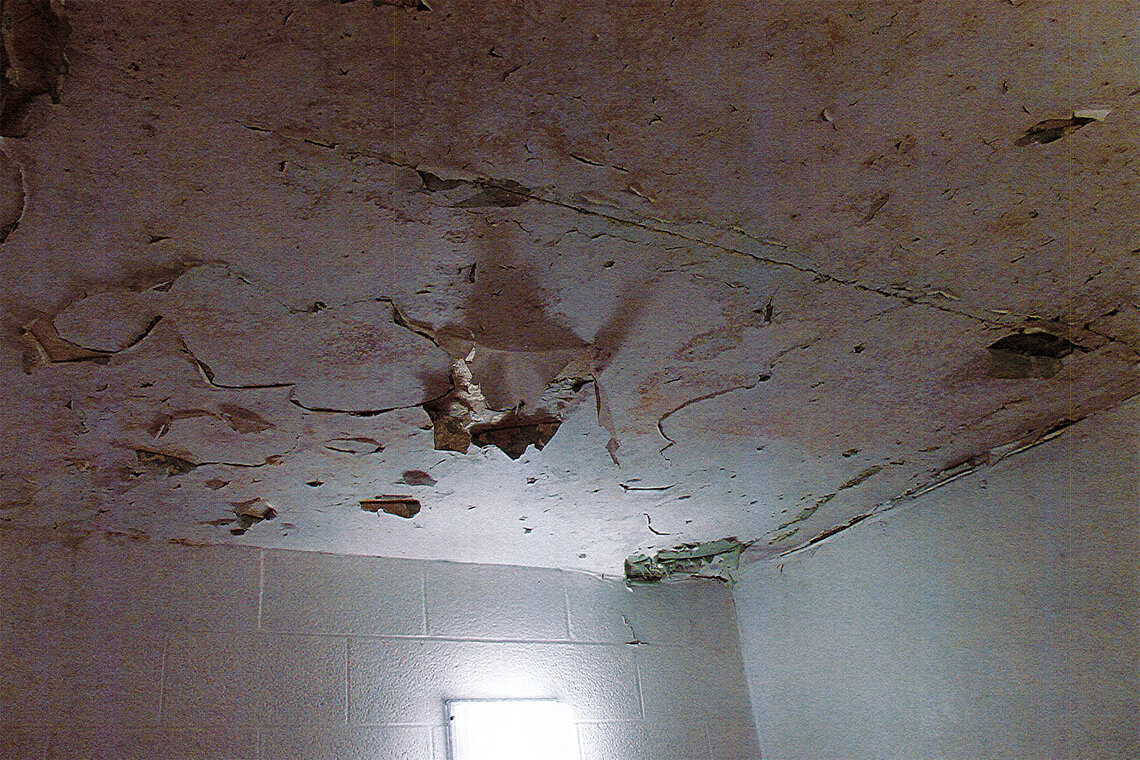 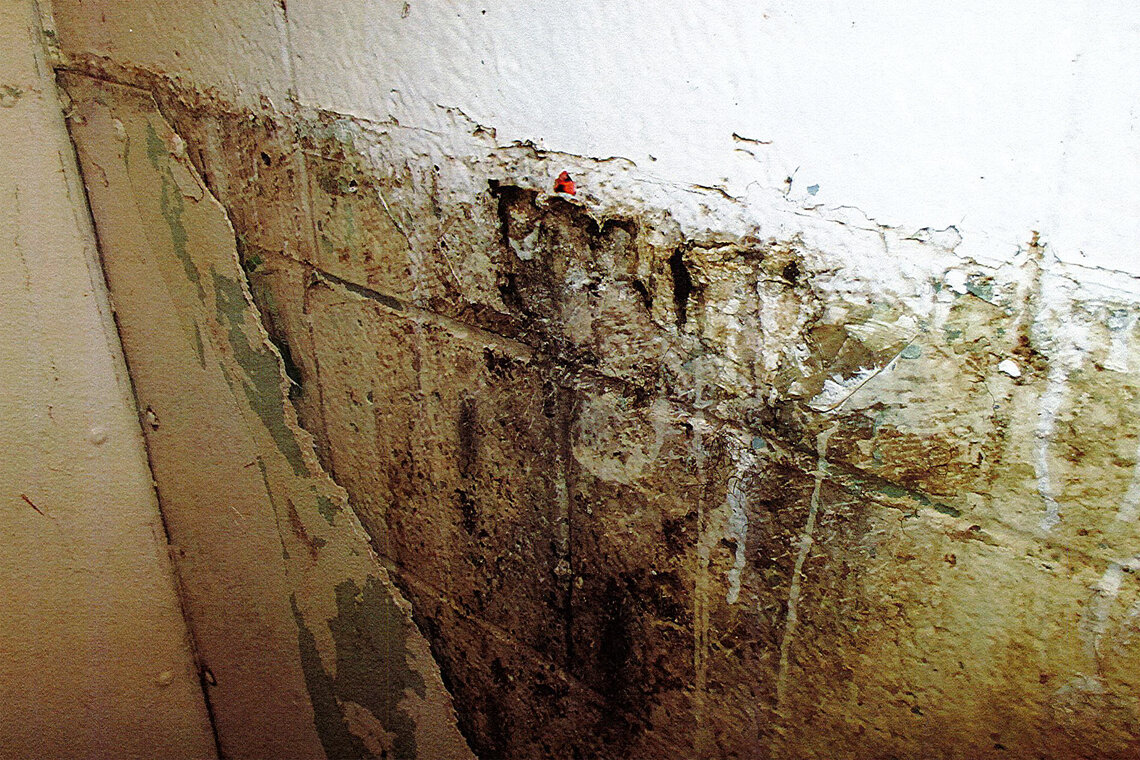 Unlike prisons, most jails are funded and managed locally, so the problems they face can vary widely from one county to the next. While there’s crumbling infrastructure in Atlanta’s Fulton County Jail, there’s been murky brown drinking water in Seattle’s King County Jail and overcrowding in Houston because of a backlog in the court system.

But more than a dozen employees, detainees and experts who spoke with The Marshall Project and The Associated Press highlighted two problems they’ve seen at jails across the country: too many people incarcerated, and not enough guards.

“Our jail facilities are at capacity,” said David Cuevas, president of the Harris County Sheriff’s Office deputies’ union. “It is truly not safe.”

The twin issues of overcrowding and understaffing have plagued jails across the country for years, and even before the pandemic many facilities were in disarray. Yet in the months after COVID-19 hit, the number of people in local lockups plummeted. People stayed home and committed fewer crimes. Police did not make as many arrests. Courts reduced bail. And jails let more people go home early. Nationally, the number of people in jail decreased by about 25% by the summer of 2020, according to data compiled by the federal Bureau of Justice Statistics.

But as concern about the virus faded, so did many of the measures designed to combat it — and soon jail populations began to rise. By the summer of 2022, many lockups held more people than they had in years, or became so overcrowded that detainees were forced to sleep on floors, in underground tunnels or in common areas without toilets.

“Everyone is on edge because it is crowded,” one man detained in Los Angeles wrote in a sworn declaration filed as part of a lawsuit by the American Civil Liberties Union. “The place smells of urine and excrement because some toilets don’t work, and people who are chained to chairs sometimes pee on the floor because the deputies won’t unchain them.”

Celia Banos, whose son was one of the people chained to a bench for several days, told The Marshall Project that she was shocked to learn how little the jail had done to take care of him.

“His condition has deteriorated in there,” Banos said. Though her son — who has schizophrenia — has been incarcerated before, she said this time the jail seemed to be getting worse.

Some jails found that they still needed to use isolated cells to quarantine potentially sick prisoners. A jail official in Houston said that meant cells that once held two or three people might only be able to hold one, and detainees with a record of violence couldn’t be separated from the general population as easily.

But even as the number of detainees increased, the number of guards did not. Just like state prisons, many local lockups saw a rise in officer vacancies — sometimes even at facilities that appeared fully staffed on paper. The City, a nonprofit news outlet in New York, reported last year that more than 1,000 Rikers Island guards were calling out sick every day due to a frequently abused policy allowing unlimited sick leave.

“The things that led to the Great Resignation were happening in jails, too: It was a depressing time, and lots of people were getting sick,” Vincent Schiraldi, a former New York City jail commissioner, said in an interview.

The guards’ union has disputed that members overuse sick leave, saying they are legitimately absent, often due to on-the-job injuries and exhaustion. In October, the jail said it still had as many as 800 employees out at a time.

With fewer officers, those who remain are often forced to work longer hours, including double, triple and even quadruple shifts. Guards in Cleveland said they didn’t have time to eat, while some jail workers in Houston reported urinating in bags when they couldn’t find someone to replace them at their posts.

Having fewer jail employees can also make life worse for detainees because there are fewer workers to let them out of their cells, take them to court, teach their educational programs or tend to their most basic needs.

In Houston, a man in one of the jail’s isolation units said violence sometimes broke out after guards didn’t let them out to shower for days at a time, while in Philadelphia — at a lockup with a 36% staff vacancy rate — incarcerated people said they couldn’t always get meals or toilet paper. (A jail spokesman “categorically denied” that allegation.) In Ohio, local media reported that guards at Cleveland’s Cuyahoga County Jail have taken to locking people in their cells 23 hours a day because there aren’t enough staff.

And in one extreme example, a man detained at the Oklahoma County jail in Oklahoma City is accused of raping a handcuffed woman after guards at the understaffed facility left them unsupervised during booking. A detention officer at the troubled facility, which the county took over from the sheriff two years ago, eventually intervened, and the man was later charged with first-degree rape. A jail official said that no disciplinary measures against staff have been announced, but the matter is still under investigation.

According to Andrea Armstrong, a law professor at Loyola University New Orleans who studies deaths in jails and prisons, staffing problems are particularly dangerous when it comes to medical care.

“We are seeing increased mortality in jails, and they are the types of deaths that could have been avoided if the person had better access to emergency care,” she said.

In February, a man at Rikers Island choked on an orange and died after staff failed to intervene in time. He was one of 18 people who have died in the city’s jails this year. Two months later, a detainee at the jail in Anoka County, Minnesota, died in his cell after the guards could not find any medical staff on duty to save him. In Houston, the family of a man who caught COVID-19 and died alone in his cell last year sued the jail. According to the family’s lawyer, U.A. Lewis, none of the staff noticed the man was dead until officers came to get him for a visit.

Despite the consensus among experts that conditions are deteriorating in many lockups, there’s far less agreement on solutions. While jails officials said they needed basic infrastructure improvements and more staff, some prisoner advocates point out that more lenient bail policies could help ensure fewer people stay behind bars when they don’t have money to pay for their freedom.

In the meantime, researchers say they need better information from the jails to be able to measure the scope of the problem.

“There’s so little data out there,” said Michele Deitch, a law professor at the University of Texas at Austin who studies jails and prisons. “We literally do not have the means to assess the safety or dangerousness of a facility in any comparative way.”

Some of the starkest examples of poor conditions — like semen-tainted food or brown drinking water — aren’t easy to measure.

Even for those things that can be measured — like overcrowding, understaffing or an increase in jail deaths — the available numbers are often years delayed and unreliable. For example, the U.S. Department of Justice said that its annual in-custody death reports undercounted jail deaths by at least 39%. And although the federal government issues an annual report about the number of people in jails nationwide, the most recent data is more than two years old.

Experts said that lack of data makes it hard to say how much of the growing alarm now actually reflects a change in jail conditions and how much is the result of heightened interest from media and the public.

But they say that so far, that increased concern has not translated into better conditions.

“It is horrible in here,” another detainee in Los Angeles wrote in a sworn declaration. “In fact, it is worse than being homeless. Even when I sleep on the streets, there is some room to stretch out. But in here, there are so many people walking by you or sleeping next to you that I’d rather be on the streets.”