How children became adults in the eyes of the law.

By Eli Hager
Looking Back at the stories about, and excerpts from, the history of criminal justice.

On the morning of June 29, 1978, Governor Hugh Carey of New York was flying to Rochester for a campaign event. His race for reelection was looking bleak. His own lieutenant governor, Mary Anne Krupsak, had run against him in the Democratic primary, and looming in the general election was former Assembly Speaker Perry Duryea, who had been hammering Carey as soft on crime.

During the flight, Carey read a New York Daily News article declaiming that Willie Bosket, a 15-year-old Harlem boy who had killed two men and shot a third on the New York City subway, had been sentenced to a mere five years at a juvenile facility upstate. The tabloids had been frothing about Bosket already, nicknaming him the "Baby-Faced Butcher" and lambasting the state’s Division for Youth for not punishing him more and sooner.

Carey snapped. Before his plane landed, he called the reporters on board to an impromptu mid-air news conference. He was going to reverse his long-held opposition to trying juveniles as adults, he announced. Willie Bosket, he swore, would "never walk the streets again."

Within a week, Carey had called the legislature back to Albany for an emergency session devoted to youth crime. Days later, the legislature passed the Juvenile Offender Act of 1978, which immediately became known as the "Willie Bosket law." With Carey's quick signature, it initiated what New York Times reporter Fox Butterfield called "a sharp reversal of 150 years of American history, the first break with the progressive tradition of treating children separately from adults." (And Carey won reelection.)

The law--a sweeping policy response to a single extreme case, proposed and passed in the course of two panicked weeks--was the first of its kind, the "first big legislatively-waive-whole-categories-of-kids-to- adult-court law," says Peter Edelman, who, as director of the Division for Youth, was in the middle of the Willie Bosket drama. States such as Florida, Illinois, and Texas soon followed suit, and, by 1997, all 50 states had passed legislation allowing or requiring certain juveniles between the ages of 10 and 17 to be charged and punished as adults. In those 19 years following Carey’s about-face, the number of children incarcerated in the United States more than doubled.

Now, a commission appointed by another Democratic governor of New York is tasked with “improving New York’s outdated juvenile justice laws.” Governor Andrew Cuomo is expected to announce the findings at his State of the State address in January. The list of recommendations is expected to include raising the age to 18 to be charged as an adult for misdemeanors and low-level, nonviolent offenses. (New York and North Carolina are the only states that prosecute all 16- and 17-year-olds as adults for all crimes.) It remains to be seen whether any action will be taken on the Willie Bosket law, which prescribes adult court for 13-year-olds charged with murder and 14- and 15-year-olds charged with 17 different felonies ranging from assault to robbery.

Both the public mood and the legal climate have shifted since Governor Carey’s day. The U.S. Supreme Court has twice affirmed that juveniles are “inherently less culpable” and more likely to be rehabilitated. “And so much has been learned,” says Trish Ortiz, the clinical director of Esperanza NY, which works with young people caught up in the justice system, “about adolescent brain development, responsiveness to being rehabilitated, and trauma-informed care,” in addition to the higher likelihood of recidivism among juveniles who have been tried in adult court.

“No architect, knowing what we know today, would sit down and design the system we have,” says Franklin Zimring, a specialist in criminal justice and family law at the University of California Berkeley Law School. “But it wasn’t designed, it was scribbled--in a single moment of fear and trembling in New York.”

“For a generation,” he says, “the system has been adjusting to that accidental design.” 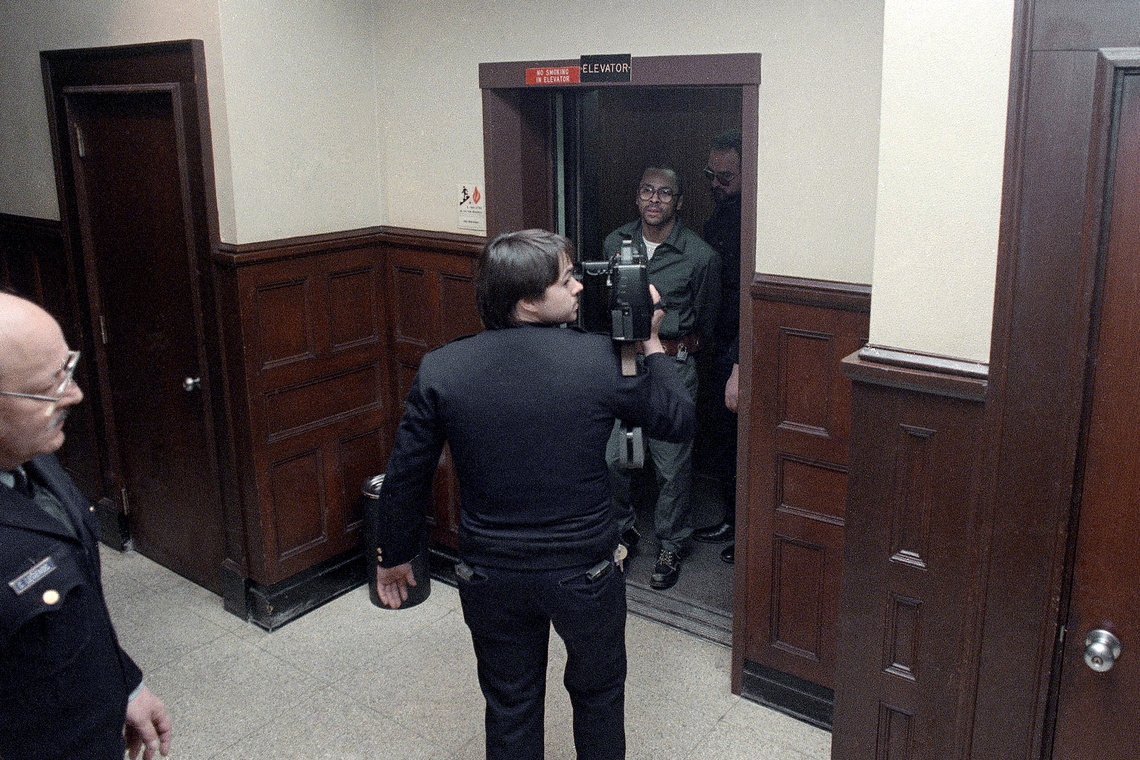 Willie Bosket at the Ulster County Courthouse in Kingston, New York in April 1989. Bosket was sentenced to 25 years to life for stabbing a prison guard in April 1988.

Before Carey's in-flight change of heart, things seemed to be going in a much different direction. In the 1960s, under Chief Justice Earl Warren, the U.S. Supreme Court had extended significant constitutional protection to juveniles accused of crimes. In 1968 and 1974, two federal delinquency prevention laws had encouraged the de-institutionalization of juveniles and ensured their “sight and sound separation” from adults.

"In New York, we'd been making all this progress in a rehabilitative direction," says Edelman, who is now at the Georgetown University School of Law, "which the Governor supported completely. He just supported it completely. [Reducing the number] of institutional beds, placing youth as close to home as possible, opening a facility for developmentally-disabled youth…”

"[But] then someone in the courts must have leaked the name of this one kid, Willie Bosket," whom Edelman says was notorious within the Division for Youth, having been in and out of the system from the age of nine. "We understood Willie to be the exception, not the rule. But the Daily News didn't care about that. They just went on a mission. I mean, they were printing stories almost every day."

"He's 15 and He Likes to Kill--Because It's Fun," read the headline on June 29, the day Carey was reading the paper. "A mad dog killer," New York City Mayor Ed Koch said.

"And the governor just exploded," says Edelman. "He lost it. After getting off the plane in Rochester, he said, 'I'm going to see to it that that kid is held until he can prove he won't do it again.'"

Carey's counsel, Judah Gribetz, and his candidate for lieutenant governor, Mario Cuomo, pleaded with Carey to step down from what he'd said. But Carey, a consummate showman who'd once swung a sledgehammer into a Long Island toll plaza to demonstrate his opposition to Long Islanders having to pay tolls, refused.

“Carey doing what he did, that was a watershed moment,” says Steven Drizin, a juvenile justice expert at the Northwestern University Law School, "for two reasons. One, New York is a bellwether state. Two, that this was done by a liberal governor in what we would later call a ‘blue state,’ showed that the 'youth crime control' message wasn't just Nixon's and Reagan's--it was becoming mainstream."

Two years later, Florida gave prosecutors unfettered authority to "direct file" certain juvenile cases in adult court. As in New York, the new law was championed not by a hard-line conservative, but by a Democrat: a Dade County D.A. by the name of Janet Reno. In 1982, Illinois followed suit, and in 1987 Texas, among other piecemeal changes in other states. In the 1990's, the rest of the states acted in a frenzy, encouraged by financial incentives in President Clinton's Juvenile Crime Control Act.

There are no comprehensive statistics on the exact number of juveniles tried as adults under these laws--in part because, nominally adults, they are not consistently tracked as a separate group through the system. But it’s clear that, in the wake of the spree of laws passed in the 20 years following New York’s, between 200,000 and 250,000 children below age 18 are charged every year in the U.S. adult system.

For 36 years and counting in New York, the treatment of 13, 14, and 15-year-olds charged with certain crimes – some major, like murder, and some more minor, like burglary in the second degree – has been dictated by an emergency legislative session called in response to Willie Bosket’s crime spree. Among those prosecuted and sentenced to adult time under the law were the Central Park Five, 14- and 15-year-olds wrongfully convicted of assaulting and raping a female jogger in 1989.

Juveniles tried under the Bosket legacy do not get a hearing in Family Court, where factors such as family history, past trauma, mental illness, and other mitigating circumstances are considered. They don’t get access to Family Court’s modest funding stream for education and rehabilitative services. They can’t get their crimes expunged. They can be put in prison for life.

Liz Ryan, founder of the Campaign for Youth Justice, an advocacy group that fights treatment of juveniles as adults, says the law “basically says to this whole cohort of kids, ‘You’re all beyond rehabilitation.’” What’s important to note, she says, is that the racial gap in arrest rates is even larger for teens than adults, meaning that the cohort the Willie Bosket law treats as “beyond rehabilitation” is disproportionately kids of color.

As for Willie Bosket, he is locked up for life at Woodbourne Correctional Facility, where he is kept in the most extreme isolation. The New York Times reported in 2008 that after repeatedly attacking guards and other inmates Bosket was consigned to a specially constructed Plexiglas cage and had gone "from defiant menace to subdued and empty inmate." At the time he had gone 14 years without a disciplinary infraction.

"Willie was the super predator before the term 'super predator' had been invented – the armed, crazed-but-calculating black killer, the vanguard of a Hobbesian nightmare,” says youth advocate Keith Hefner, a New Yorker since the 1970’s. “From what I know, I’m glad that Willie Bosket will never leave prison. But he was an ultra-extreme example... Basing our social policy on the most extreme outlier, that’s what’s truly crazy."

An earlier version of this article suggested that Willie Bosket remained a violent and defiant inmate to the present day. The article has been updated, thanks to an attentive reader, to reflect Bosket's years in isolation.