The many ways we recycle vacant prisons.

By Alysia Santo
The Lowdown breaks down the rituals and routines of the criminal justice system.

At a former prison in the Bronx, the metal bars, steel doors, and other remnants of the building’s carceral past will soon be torn down. Corrections officials have announced today that the Bronx’s Fulton Correctional Facility is being transformed from a minimum security prison into a reentry center for newly released inmates, marking the first time that a prison is being reused in such a way. Fulton has sat empty since 2011, when Governor Andrew Cuomo announced a slew of prison closures to help the state save money. Thirteen state prisons have since been closed.

Cuomo is not alone. In an effort to narrow budget gaps, some governors are shutting down or consolidating prisons in greater numbers. Between 2011 and 2013, at least 17 states announced that 70 prisons were slated for closure. Former Governor Rick Perry declared at CPAC last year: “You want to talk about real conservative governance? Shut prisons down. Save that money.” (In contrast, his predecessor, George W. Bush, oversaw the construction of 38 new prisons during his five years in office.)

So what to do with the now-empty prisons? “Reuse is a new territory in corrections,” says Nicole Porter, Director of Advocacy for the Sentencing Project, which compiles an annual report on prison closures. And while many communities, particularly rural ones, have struggled to resell or repurpose their vacant prisons, others have completely re-imagined the cellblocks in their backyards.

In 2016, Growing Change — which designs models and methods for “flipping” vacant prisons — is set to transform Wagram Correctional Center in North Carolina, turning the solitary cells into aquaponic tanks that shunt fish waste through sun-facing walls into a greenhouse. The old “Hot Box,” a 19th century method of isolation and torture will become a recording studio. Other communities have their own creative ideas: The Arthur Kill Correctional Facility on Staten Island will soon open as a movie studio; plans for a small prison in upstate New York have included a state veterans' cemetery, a Native American cultural center, and currently, a summer camp for kids; and on Monday, a former Louisiana detention complex was reopened as a transitional work facility. 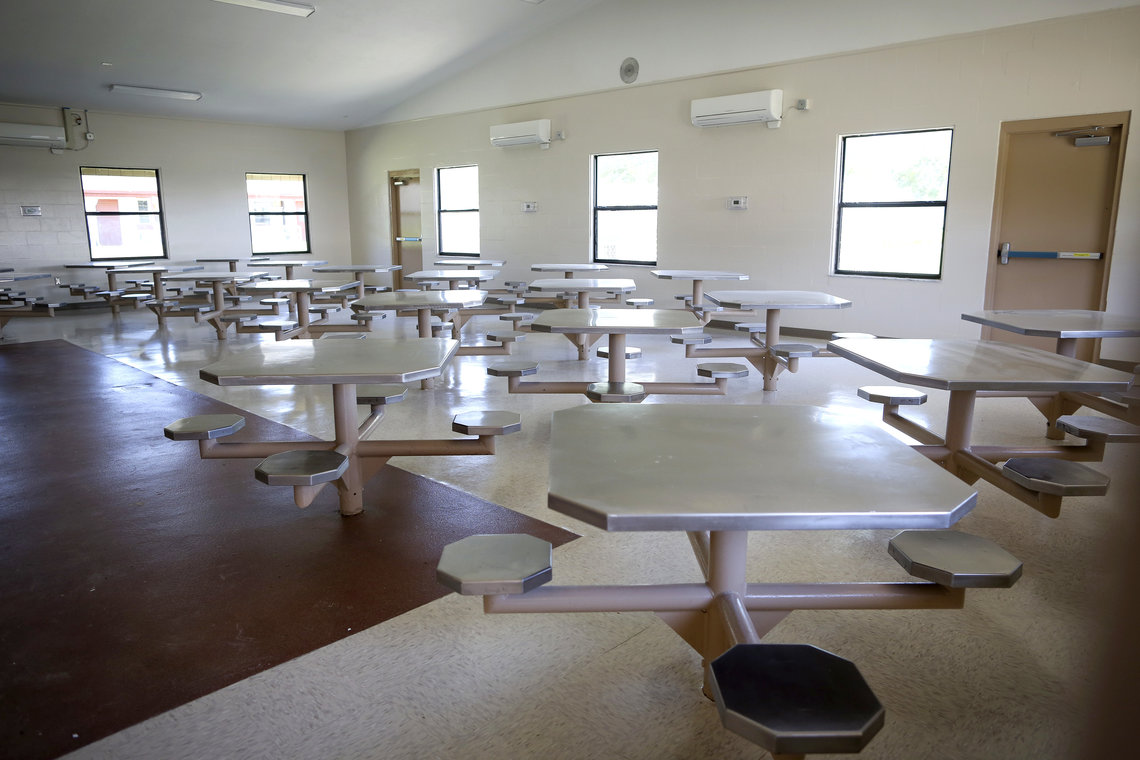 The Gainesville Correctional Institution in Florida was transformed into a homeless shelter in 2014.

When it came to transforming the Gainesville Correctional Institution in Florida into a homeless shelter in early 2014, “We tried to get rid of all the elements that reminded people it was a former prison as quickly as we could,” says Jon DeCarmine, director of operations for the North Central Florida Coalition for the Homeless and Hungry. Some of those changes have been aimed at the prison bathrooms, where showers face a large, open room. “We’re working on putting up curtains.” DeCarmine and others have gone on “search and destroy missions” to locate different signage around the prison property, including ones reminding corrections officers: “We never walk alone.”

While some communities have struggled to resell their vacant prisons and jails, a prison’s restricted, self-contained design can be the very thing that makes it an ideal candidate for reuse. “Because these facilities are built to run around the clock, the building features make it convenient for many types of public and communal use,” says Catherine Chan, an architect specializing in prisons, jails, and courts. For Nick Erker, owner of Colorado Farm Products, the extensive security infrastructure at the former High Plains Correctional Facility made it the perfect location for his project: To grow and distribute medicinal marijuana. “There’s a video surveillance system, a lock system, concrete walls, and perimeter sensors on the fence,” he says. “All those lend themselves to a secure growing operation.” The proposal was “not well received by the correctional community,” he says, and is currently on hold.

An Inmate for a Night

A common trend among prison reconstructions projects — past and present — is to transform those facilities into hotels that incorporate the building’s history. The Liberty Hotel, located in Boston’s former Charles Street Jail, began accepting overnight guests in 2007. Visitors can still find evidence of the building’s prior life at Clink restaurant, where the “vestiges of original jails cells create cozy nooks for dining.” At the former Sultanahmet Prison in Istanbul, which became a luxury Four Seasons in 1996, etchings made by inmates can still be found on the marble pillars. And guests at Latvia’s Karosta prison shell out $16 a night to get the “full prisoner experience,” complete with a thin mattress, guards, and physical exercise as punishment. Until 1997, Karosta housed inmates; now, visitors must sign a form acknowledging they will be “insulted” and “treated like a prisoner,” according to the hotel’s website, which also tells prospective guests, “Remember that this is your choice.”