A new report could have a big impact on New York’s prison population — if anyone pays attention.

A new report by some of New York’s key criminal justice players recommends major changes to the state’s sentencing system. The report, which will be released on Wednesday, would reduce the length of prison sentences and broaden eligibility for probation and other alternatives to incarceration for about one-third of the felony convictions New York hands down each year. The report would also end the state parole board’s traditional role as the arbiter of when, exactly, prisoners go home.

With more than 50,000 people imprisoned in New York State, even small sentencing changes can make a big difference. “If you increase the time served even by three months across 10,000 people, you’re going to generate a whole lot more imprisonment,” says Martin Horn, executive director of the New York State Sentencing Commission, which produced the report.

Jonathan Lippman, chief judge of the state’s highest court, established the commission in 2010 to craft a simpler, more transparent sentencing scheme. “He did not specifically charge us to reduce the prison population,” Horn says. “If that turns out to be a side benefit, that’s terrific.”

At this point, the commission’s recommendations are just that — recommendations. The suggested changes were compiled into a piece of draft legislation that the committee has submitted to the state legislature. But the bill so far has no sponsor, and the prospect of fewer prison beds — and, by extension, fewer prisons — has traditionally faced fierce opposition by the New York state correctional officers union and by legislators representing the upstate communities where most of the state’s prisons are located. As it is, upstate District Attorney Kathleen Hogan, who served on the Commission, says she would not support the legislation. “I would support the idea of migrating to determinate sentences, but I think that the numbers are too low,” she told The Marshall Project. Gov. Andrew Cuomo has not said whether he will support the proposals.

New York’s body of sentencing laws is a patchwork, with the history of the state’s changing politics woven into it and over it. As a result, the new report says, sentencing is “confusing and misleading” for prisoners and victims alike. 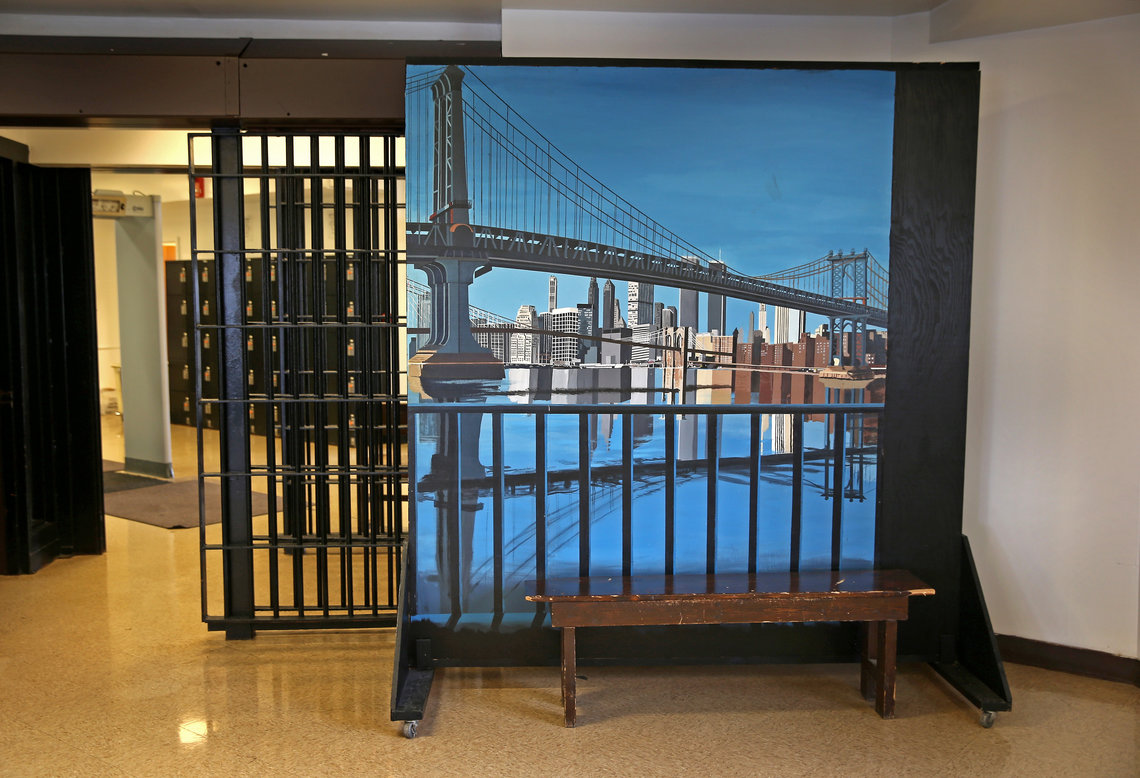 A mural depicting the Manhattan Bridge inside the Wallkill Correctional Facility in Ulster County, New York.

Historically, New York State’s sentences were all indeterminate: a judge could hand down a range of years that a prisoner might serve (such as 1-to-3 or 5-to-15). When during that window the person would actually go home was unpredictable: it was up to a parole board.

The changes began in 1995 under Gov. George Pataki. The nation had just kicked off a federally-funded prison-building boom, and a get-tough attitude prevailed. Pataki proposed eliminating parole for those convicted of violent felonies. Under the resulting law, judges handed down determinate sentences — a specific number of years, with very little wiggle room — and they were long.

In the 2000s, the public began calling for a change to the 1973 Rockefeller drug laws, which mandated draconian sentences like 15 years to life for even low-level drug crimes. The resulting reforms in 2004 and 2009 eliminated indeterminate sentences for most drug crimes, too.

The commission’s report is aimed at these crimes — class C, D, and E felonies — considered “non-violent” under the law but not always so in reality. About 5,500 out of the 14,000 people who enter the New York State prison system each year are convicted of these crimes.

The commission, composed of judges, victims’ representatives, professors, and attorneys, recommended bringing these sentences into line with those for other crimes by eliminating the parole board’s discretion. They suggested a new matrix of sentence lengths that judges can hand down, eliminating mandatory minimums for a wide range of crimes and expanding the number of crimes eligible for alternatives to incarceration like drug treatment and community service. They also recommended much shorter terms of supervision once people are out of prison; for most offenders, researchshows that longer periods on parole do not improve public safety but do increase the odds that someone will go back to prison for a technical violation.

Seymour James, the Legal Aid Society’s attorney-in-chief, cites as an example someone who steals a car. Under current law, if he has been convicted of a felony before, he would receive a mandatory prison sentence of anywhere from two to seven years, depending on certain factors like the value of the car. “They may be an individual who has a drug problem, and they may be stealing in order to support that habit,” says James, who served on the commission. The suggested new sentencing structure “would give the judge the opportunity to look at that person’s background and make a determination that they may need an alternative, they may need a treatment program.”

Often, people are convicted of multiple felonies from different categories. If the man in James’s example had had drugs on him when he was caught, he might have been convicted of both grand larceny (an indeterminate sentence of 4.5 to 9 years) and possession of a controlled substance (a determinate term of 7 years, eligible for “good time” under DOC policy).

“Your eyes would roll trying to figure out when this guy’s going home,” says Horn.

Beyond simplifying sentences, these changes could also lead to “a marked decrease in prison population,” the report says — but commission members decline to say just how marked. A table in the report suggests a two to seven month decrease in the time people would actually serve for these classes of felonies. Multiplied out over thousands of people, these small changes could have a big impact.

If they become law, that is.

Similar recommendations by the 2007 O’Donnell Commission, established by Gov. Eliot Spitzer, never gained any legislative traction, in part because the recommended sentence ranges in that report were too harsh, Horn says: “The Assembly rejected that. They felt those maximums were too high, were too broad.”

This time around the opposite might be true; with these recommendations shaving months off of thousands of sentences, district attorneys and other tough-on-crime advocates might push back. Lake George District Attorney Kate Hogan submitted a letter — included as an addendum to the report — expressing “grave concerns” about the shortened sentence ranges. She told the Marshall Project that reducing the maximum penalty available for certain crimes “discounts plea bargaining in its entirety. No one pleads the maximum. That’s how you incentivize someone to resolve a case by plea.”

With no political champion in the legislature, the changes may be too much “inside baseball” to generate public enthusiasm, Horn fears. By contrast, the 1995 changes to sentencing laws, Horn says, “had the governor behind them. The DAs, everybody said, ‘Yeah, let’s get tough on violent crime.’ Then in 2005, there was this groundswell from everyone, and Governor Paterson said, ‘Let’s reform the Rockefeller drug laws.’” This time around, the only constituency for the changes may be the experts on the commission, making the case that the architects of the current system — in Horn’s words — “really screwed things up.”

An earlier version of this article misstated the date that the commission was named. It was 2010, not 2013.