A closer look at the president’s speech on criminal justice reform.

Whether or not you agree with President Obama about the need for criminal justice reform, it is undeniable that the speech he delivered in Philadelphia on Tuesday to the annual convention of the NAACP broke new ground. Many presidents have spoken before, and some with great ardor, about law and order. But no sitting president has ever publicly spoken at such length and in such detail as Obama now has about the persistent problems of crime and punishment in this country. 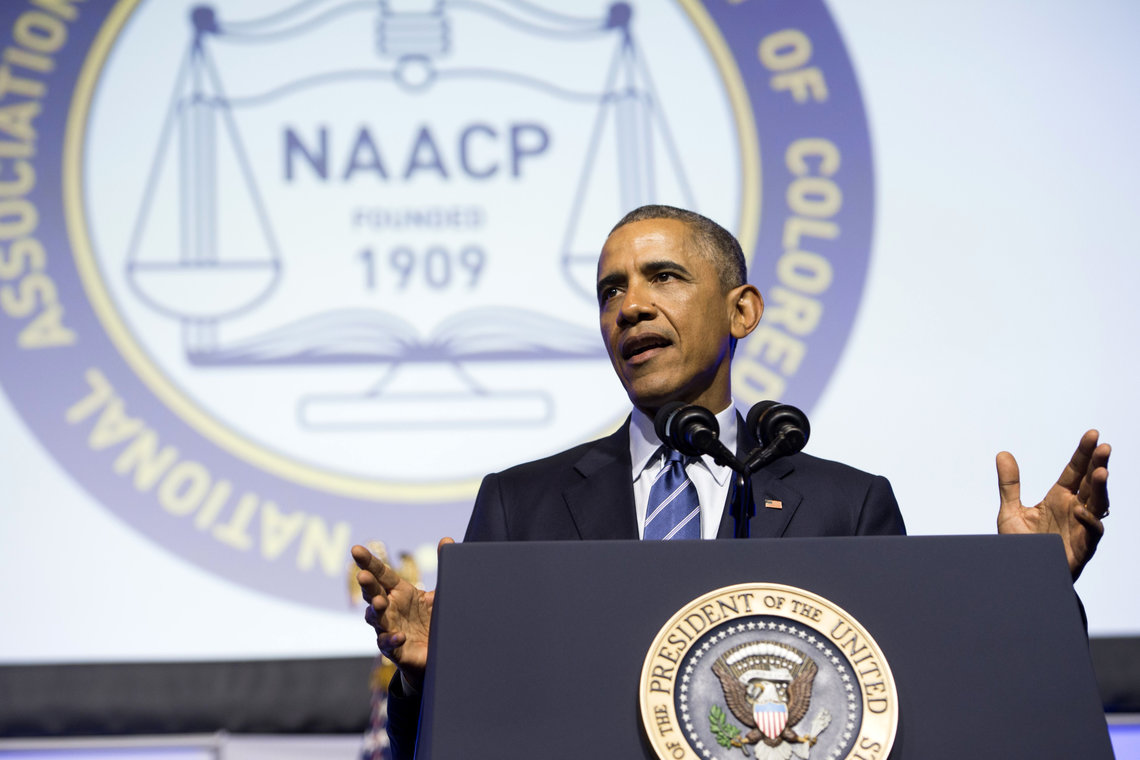 Pointedly invoking the names of prominent Republicans like Senators Rand Paul of Kentucky and John Cornyn of Texas, part of a bipartisan groundswell for smarter law enforcement, the president called for meaningful change at virtually every juncture: from the first interaction with police officers to prosecutorial charging discretion to the prison sentences imposed by judges to the conditions of confinement to the need for job training for those who are about to be released. Here are key passages from an address that surely will help shape the Congressional debate over justice reform in the weeks to come, along with links to some context:

In recent years, the eyes of more Americans have been opened to this truth. Partly because of cameras, partly because of tragedy, partly because the statistics cannot be ignored. We cannot close our eyes anymore, and the good news, and this is truly good news, is that good people of all political persuasions are starting to think that we need to do something about this.

In far too many cases the punishment simply does not fit the crime. If you are a low-level drug dealer or you violate your parole, you owe some debt to society. You have to be held accountable and make amends. But you don’t owe 20 years. You don’t owe a life sentence. That’s disproportionate to the price that should be paid. And by the way the taxpayers are picking up the tab for that price. (See: “Federal judge: My drug war sentences were ‘unfair and disproportionate’”)

On the opportunity costs of mass incarceration:

As Republican senator and presidential candidate Rand Paul has said… imprisoning large numbers of nonviolent drug offenders for long periods of time costs the taxpayers money without making them any safer. Roughly one-third of the Justice Department’s budget now goes toward incarceration. One third…. But every dollar they have to spend keeping nonviolent drug offenders in prison is a dollar they can’t spend going after drug kingpins or tracking down terrorists or hiring more police and giving them the resources that would allow them to do a more effective job of community policing. (See “White House Task Force on 21st Century Policing”)

On racial disparities in criminal justice:

And then of course there are the costs that cannot be measured in dollars and cents. Because the statistics on who gets incarcerated show that by a large margin, it disproportionately impacts communities of color. African Americans and Latinos make up 30 percent of our population; they make up 60 percent of our inmates…. The bottom line is that in too many places, black boys and black men, Latino boys and Latino men, experience being treated differently under the law…. This is not just anecdote. This is not just barbershop talk.

One of the consequences of this is around one million fathers are behind bars. Around one in nine African-American kids has a parent in prison…. Our nation is being robbed of men and women who could be workers and taxpayers, who could be more actively involved in their children’s lives, could be role models, could be community leaders, and right now they are locked up for a nonviolent offense. So our criminal justice system isn’t as smart as it should be, it’s not keeping us as safe as it should be, it’s not as fair as it should be. (See “Charting the shocking rise of racial disparity in our criminal justice system”)

On changes to federal prosecutorial discretion:

Under the leadership of Attorney General Eric Holder, now continued by Loretta Lynch, federal prosecutors got what he called “smart on crime,” which is refocusing efforts on the worst offenders, pursuing mandatory minimum sentences 20 percent less often than they did the year before. That idea is that you don’t always have to charge the max. To be a good prosecutor, you have to be proportionate. And it turns out that we are solving just as many cases, there are just as many plea bargains, it’s working, it’s just that we are just eliminating the excess. (See, Department of Justice memorandum, August 12, 2013, regarding ”Department Policy on Charging Mandatory Minimum Sentences and Recidivist Enhancements in Certain Drug Cases”)

On what the reform should look like in the community:

I believe crime is like any other epidemic. The best time to stop it is before it starts. And I am going to go ahead and say what I have said a hundred times before…. If we make investments early in our children we will reduce the need to incarcerate those kids. One study found that for every dollar we invest in pre-K, we save at least twice that down the road in reduced crime. Getting a teenager a job for the summer costs a fraction of what it costs to lock him up for 15 years.

On the school-to-prison pipeline:

What doesn’t make sense is treating entire neighborhoods as little more than danger zones…. Places like West Philly or West Baltimore, or Ferguson, Missouri, they are part of America, too. They are not separate. They are part of America like anywhere else, the kids there are American kids, just like your kids and my kids. We’ve got to make sure that boys and girls in those communities are loved and cherished and supported and nourished and invested in.

And we have to have the same standards for those children as we have for our own children. So if you are a parent, you know there are times when a boy or a girl are going to act out in school. And the question is, are we letting principals and parents deal with one set of kids and we call the police on another set of kids. That’s not the right thing to do. We have to make sure that our juvenile justice system remembers that kids are different; don’t just tag them as future criminals, reach out to them as future citizens. *

For nonviolent drug crimes, we need to lower long mandatory minimum sentences or get rid of them entirely. Give judges some discretion around nonviolent crimes so that potentially we can steer a young person who has made a mistake in a better direction... We need to ask prosecutors to use their discretion to seek the best punishment, the one that is going to be the most effective instead of just the longest punishment. We should invest in alternatives to prison, like drug courts and treatment and probation programs, which ultimately can save taxpayers thousands of dollars per defendant each year. (See SAFE Justice Act)

Some criminals still deserve to go to jail. And as Republican senator John Cornyn has reminded us, virtually all of the people incarcerated in our prisons will eventually, someday, be released, and that’s why the third place we need reform is in the cellblock… While the people in our prisons have made some mistakes, and sometimes big mistakes, they are also Americans. And we have to make sure that as they do their time, and pay back their debt to society, that we are increasing the possibility that they can turn their lives around.

What’s more I have asked my Attorney General to start a review of the overuse of solitary confinement across American prisons. The social science shows that an environment like that is often more likely to make inmates more alienated, more hostile, potentially more violent. Do we really think it makes sense to lock so many people alone in tiny cells for 23 hours a day for months, sometimes for years at a time? That is not going to make us safer, that’s not going to make us stronger, and if those individuals are ever released, how are they ever going to adapt? Our prisons should be a place where we can train people for skills that can help people find a job, not train them to become more hardened criminals. (See GAO Report on segregated housing in federal prison)

Ban the box — on job-training for inmates and opportunities for ex-offenders:

Some places are doing better than others. Montgomery County, Maryland, put a job-training center inside the prison walls to give folks a head start in thinking about “what might you do otherwise” than committing crimes. That’s a good idea. Here’s another good idea, one with bipartisan support in Congress: let’s reward prisoners with reduced sentences if they complete programs that make them less likely to commit a repeat offense. Let’s invest in innovative new approaches to link former prisoners with employers, help them stay on track.

Let’s follow the growing number of our states and cities and private companies who have decided to ban the box on job applications so that former prisoners who have done their time and are now trying to get straight with society have a decent shot with a job interview. And if folks have served their time, and they have reentered society, they should be able to vote. (See “Felony Disenfranchisement”)