D’Angelo Burgess Fled From Police. Does That Make Him a Killer? 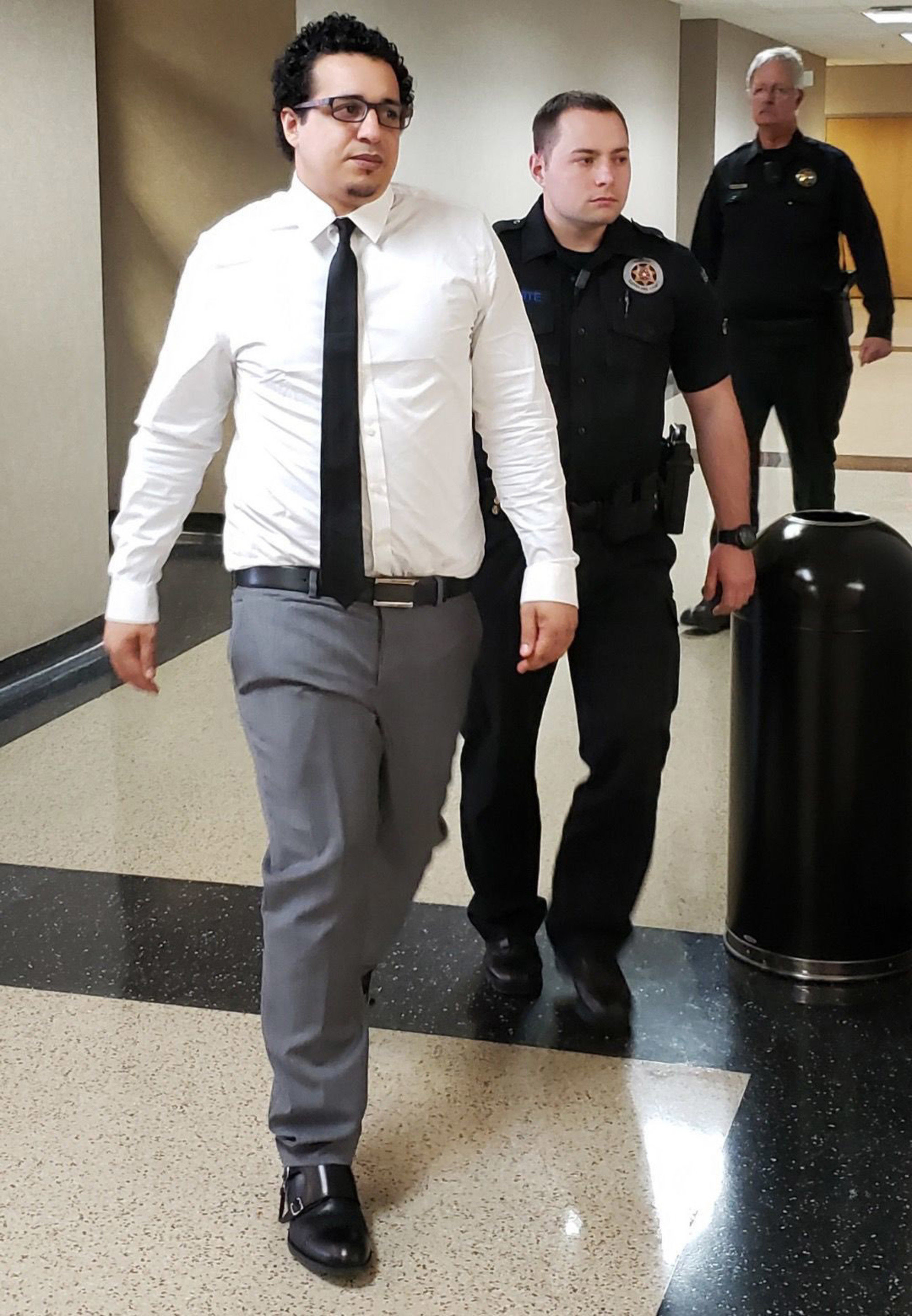 D’Angelo Burgess was at least 100 yards away from the high-speed car crash that killed Oklahoma Highway Patrol Lt. Heath Meyer in July 2017. Meyer was struck by a fellow trooper who lost control of his cruiser as he sped north in pursuit of Burgess on Interstate 35 near the Oklahoma City line.

But in March Burgess was convicted of first-degree felony murder in Meyer's death. He faces life in prison at sentencing later this month.

Experts say the Burgess case stretches the felony murder rule—a rule that five states have recently reassessed—to its breaking point. “Is it fair to charge this person with felony murder? No, not in my view,” said Guyora Binder, a professor at the University at Buffalo law school and a leading expert on felony murder. “Most prosecutors wouldn’t charge this as a felony murder.”

This story was also co-published with The Frontier.

At trial, Burgess’s defense team argued that at least some of the blame for Meyer’s death lies with the Highway Patrol’s outdated and unsafe pursuit policy.

Meyer was the eighth person killed in a Highway Patrol­ chase in Oklahoma in the previous 14 months. Two of the eight were uninvolved drivers. For years, the Oklahoma Highway Patrol refused to release its pursuit policy; it finally came out as part of Burgess’s trial. It allows troopers to chase anyone who flees for almost any reason. 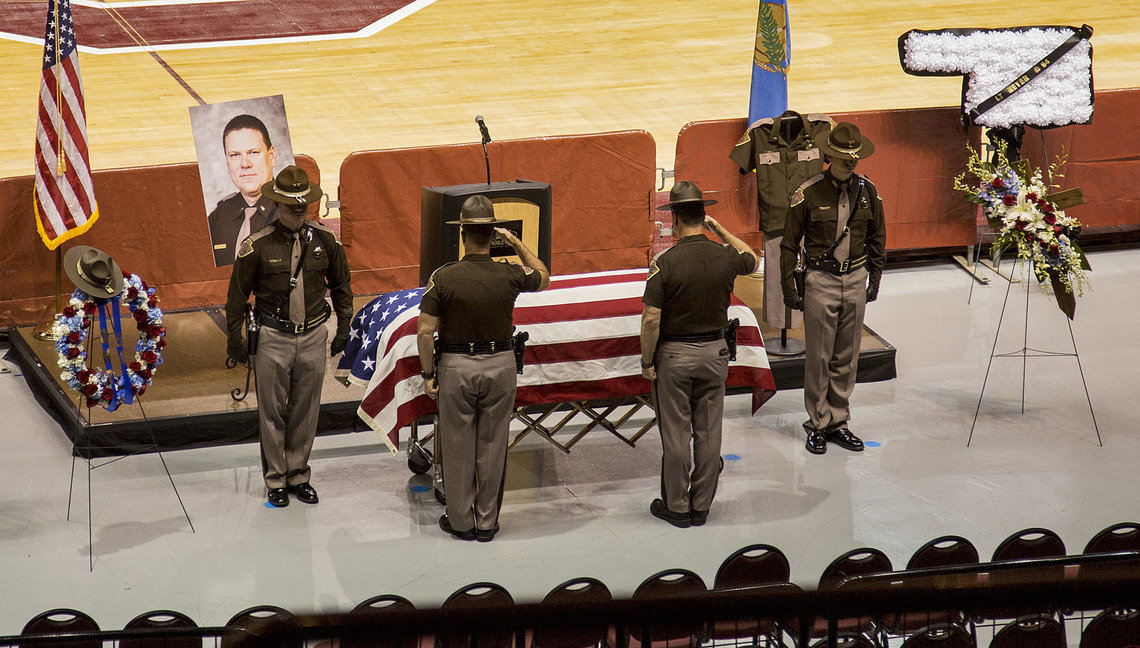 Members of the Oklahoma Highway Patrol salute the casket of Lt. Heath Meyer, who was killed when he was struck by a car driven by a fellow patrolman chasing a suspect.

The incident that led to Meyer’s death started with a routine traffic stop: Late one summer evening, Trooper Rodney Rideaux pulled Burgess over for following too close to the car ahead of him. Rideaux asked Burgess to step out and follow him to his cruiser, but instead, Burgess sped away.

Rideaux gave chase in his cruiser, followed closely by another trooper, at speeds exceeding 100 miles per hour. Traffic was thick on the interstate, and Burgess weaved in between cars, passing on the inside and outside shoulders.

Rideaux radioed the chase into dispatch, and Meyer arrived with several other troopers to lay “stop sticks”—portable tire-deflation devices—on an upcoming stretch of road. Burgess drove right past them, undeterred, but Rideaux, seeing the stop sticks and bystanders’ stopped cars, screeched to a halt. Clint Painter, the trooper behind him, came over a hill to see Rideaux’s stopped cruiser just as Meyer climbed onto the highway on foot to retrieve the stop sticks. Painter slammed on the brakes, but he was going too fast to stop in time. He crashed into Rideaux’s cruiser, ricocheted off, and hit Meyer, then a concrete barrier. Meyer was launched over the barrier and onto the other side of the highway. The 43-year-old father of two died 10 days later.

Police pursuits kill an average of one person every day, according to the Bureau of Justice Statistics. A 2014 policing reference book describes pursuit driving as “the most deadly weapon in a police officer’s arsenal,” and compares giving chase in a police car to shooting in an area with innocent bystanders.

“It’s a very dangerous thing to do,” said Geoffrey Alpert, a University of South Carolina criminology professor who co-wrote the reference book. “We can chase these guys, but at what cost?” The safest pursuit policy, he said, allows police to give chase only when the person fleeing is suspected of a violent crime, or there’s good reason to believe he might pose a danger to the public. For routine traffic stops like Burgess’s, the decision should be easy, Alpert said. “Let him go. We’ll get him another time.”

Cleveland County District Attorney Greg Mashburn, who tried the case, disagrees. “Most people who run, there’s something else going on,” he said. “Rideaux obviously had to try to figure out what was going on in the car. He didn’t know, is there a body in the trunk?”

Alpert, who conducts trainings with law enforcement agencies nationwide, said “the body in the trunk” is the first myth he dispels when teaching about pursuits. “People are scared to death,” he said. “They run for the stupidest of reasons.”

A majority of law enforcement agencies nationwide have policies that place limits on when officers can initiate a chase, according to the Bureau of Justice Statistics. State police and highway patrol agencies leave the decision to officer discretion twice as often as local police agencies do—and their rate of pursuits is more than twice as high. A 2015 model policy by the International Association of Chiefs of Police said “pursuits for minor violations are discouraged.”

At Burgess’s trial, Oklahoma Highway Patrol Capt. Ronnie Hampton said the chase was conducted properly, and as a supervisor there wasn’t anything that would have made him call it off, Tulsa World reported. “You’re gonna let that play out,” he said.

Mashburn, the district attorney, brought first-degree felony murder charges against Burgess, arguing that if Burgess hadn’t fled from the police, Meyer would not be dead. Under the legal doctrine of felony murder, if someone dies as a result of a felony, anyone who participated in that felony—even if they didn’t kill or even mean to kill anyone—is as guilty as a killer. In recent years, five states—most recently California—have abolished or rolled back their felony murder laws, reasoning that life sentences are unreasonable for someone who didn’t kill or mean to kill.

In most of the remaining states, the rule only applies when deaths result from specific crimes, like robbery or rape. In 2006, after an Oklahoma City police sergeant was killed chasing a fleeing driver, Oklahoma lawmakers changed their state’s law to allow felony murder charges when someone is killed in a police chase.

“Oklahoma law is very clear on that point,” said Mashburn. “As soon as the event happened, we were looking at that charge.”

Last year, a Tulsa man was convicted of first-degree felony murder after killing an uninvolved driver while fleeing police. In 2017, a man fleeing Oklahoma City Police was charged with second-degree murder when a passenger in his car was killed in a crash. (His case is ongoing.) In both of those cases, the driver caused the deaths directly. There don’t appear to be any other Oklahoma cases where the person charged did not hurt anyone himself.

Mashburn had a range of options to charge Burgess with, including manslaughter, which applies when the person acted recklessly but didn’t mean to kill anyone. Manslaughter in Oklahoma can carry as few as four years in prison and as much as life. In a case like this one, says Binder, the felony murder expert, “most juries would not convict of felony murder when they could convict of manslaughter instead.”

The first-degree felony murder conviction means an automatic life sentence. The judge’s only discretion at Burgess’s sentencing hearing on May 31 is whether to suspend some part of the sentence or give Burgess the possibility of parole.

Mashburn said he hopes that life means life. “Heath Meyer doesn’t have a chance of parole from the grave,” he said.