Racism Tainted Their Trials. Should They Still Be Executed?

Seven years ago, a judge ruled that prosecutors improperly excluded black jurors in the murder trial that put Marcus Robinson on death row.

Now the North Carolina Supreme Court has to decide whether that evidence of racial bias—and similar findings of systemic bias in a handful of related cases—must be taken into account in death penalty appeals.

The hearings stem from the 2013 repeal of the Racial Justice Act, a law that briefly allowed death row inmates to seek life sentences without parole if they could prove that racial bias tainted jury selection in their trials.

After Democrats passed the law in 2009, Robinson and three others won life sentences without parole.

But when pressure from prosecutors and a campaign of fear-mongering led the Republican-controlled legislature to repeal the Racial Justice Act, Robinson and the other three prisoners returned to death row.

The impending hearings, scheduled for late August, raise broad questions about the equity of North Carolina’s judicial system, said Cassandra Stubbs, executive director of the ACLU’s Capital Punishment Project, which is representing Robinson. “The importance of fairness and the integrity of the court is really on the line.”

And the hearings come at a time when the U.S. Supreme Court has been cracking down on racial discrimination in jury selection. In June, the court overturned the murder conviction of Curtis Flowers, a black man tried six times in Mississippi by a prosecutor who used all of his peremptory strikes against black jurors in each of the first four trials.

North Carolina Attorney General Josh Stein declined to comment on the hearings but stressed the importance of holding defendants accountable and providing justice for victims.

North Carolina didn’t include African-American citizens in jury pools in a meaningful way until the mid-20th century; prosecutors then often used peremptory challenges to eliminate black jurors, according to James E. Coleman, Jr., a professor at the Duke University School of Law.

Taking black people off the jury lowers the standard of proof for the prosecutor, Coleman said, because white jurors will be more willing to accept any kind of evidence if the defendant is black.

In 1986, the Supreme Court ruled in Batson v. Kentucky that qualified jurors cannot be removed from jury pools because of their race or gender. But the North Carolina Supreme Court has never agreed with defendants who argued that’s what happened in their cases.

Marcus Robinson and a co-defendant went on trial in 1994, in Fayetteville, N.C., charged with robbing and murdering a white high-school student. The victim’s family declined to comment.

County prosecutors removed 50 percent of black jurors and less than 15 percent of white ones; the jury that convicted the two defendants had just two African-American members.

More than a decade later, the state legislature passed the Racial Justice Act, allowing death row inmates to receive commuted life sentences without parole if they could prove that racial bias influenced their death sentence.

Floyd McKissick, Jr., the bill’s sponsor, said it was fundamentally about procedural fairness—not an attempt to end capital punishment, as opponents claimed.

“It brought together people who all shared the common belief that if the death penalty was to be used in cases, then it should be free of racial bias,” he said.

Lawyers for Robinson and others on death row who had been prosecuted in Fayetteville by the Cumberland County District Attorney’s office began reviewing their jury selections.

They discovered that in numerous cases prosecutors asked potential black jurors targeted and inappropriate questions. For example, in one case they asked a man if he was familiar with Bob Marley and the former emperor of Ethiopia.

In the 2001 capital murder trial of Quintel Augustine, who was charged with shooting a police officer, a Cumberland County prosecutor dismissed every qualified black juror in the jury pool. In his notes, the prosecutor described one black man as a “thug.” Another man was labelled a “blk wino,” though a white juror with a DUI conviction was considered acceptable in those same notes (“country boy — ok”). One of Augustine’s prosecutors had also attended a seminar that taught North Carolina district attorneys how to give race-neutral explanations for striking black jurors, and had a handout of accepted reasons like “hairstyle.”

A statistical analysis found that prosecutors across the state removed qualified black jurors at more than twice the rate of non-black jurors.

“It hurt my heart to hear that evidence of racism,” Tawana Choate, mother of Quintel Augustine, said in an affidavit. (She declined to comment to The Marshall Project.) “I don’t understand why African Americans can’t serve on juries just like white people.”

The Removal of Black Jurors in North Carolina

Researchers analyzed the jury selection process in 173 murder trials between 1990 and 2010 in North Carolina where the defendant ended up on death row. They found that prosecutors used peremptory challenges to remove qualified black jurors at twice the rate that they removed non-black jurors.

In defending the actions of Cumberland County prosecutors, the state has argued that past discrimination against African-Americans may affect their ability to serve as fair jurors. Supporters of the Racial Justice Act say this is a way to further justify and perpetuate discrimination.

“And that's why as a district attorney selecting a jury, I worked very, very hard at not doing that,” Dickson testified. “That doesn't mean I was perfect either.”

“There are dead cops and dead innocent folks and women and innocent children, all of whom grew up without family members because of what these guys did,” said Cumberland County Assistant District Attorney Robert Thompson, who declined to comment further about the pending cases. 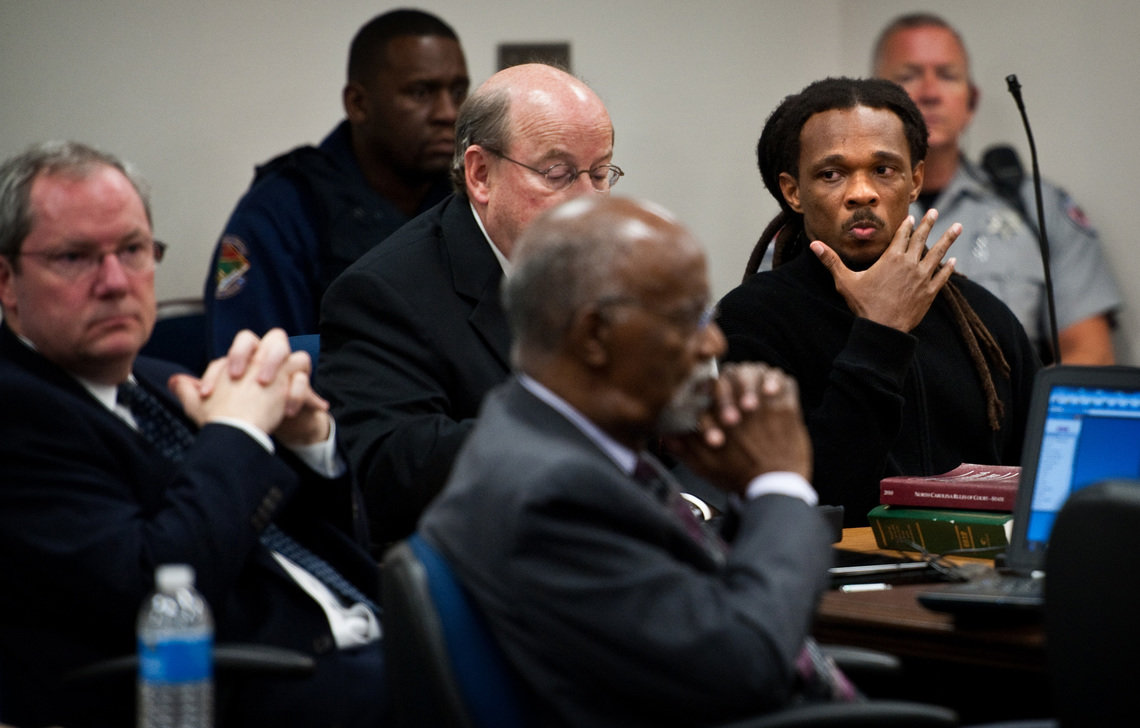 Quintel Augustine, right, sat with his defense team during the closing arguments of a Racial Justice Act hearing at the Cumberland County Courthouse in 2012.

Over 90 percent of North Carolina’s 152 death row inmates filed Racial Justice Act challenges. Only four—all from Cumberland County—were heard by a judge in 2012. That judge initially granted relief to each of the four Cumberland County defendants, resentencing them to life imprisonment after ruling that race was an “overwhelming” factor in their death sentences.

These rulings were later overturned by the state Supreme Court, which found the judge had not given the state enough time to respond to the defendants’ findings.

Meanwhile, the legislature repealed the Racial Justice Act, arguing that it turned “murderers into victims while the real victims lie in their graves," as former state Sen. Thom Goolsby said at the time.

A different judge put the Cumberland County defendants back on death row in 2017, dismissing the racial bias evidence because the act was no longer on the books.

Robinson’s lawyers then appealed his case to the state Supreme Court. Two other defendants from Iredell County, just outside Charlotte, will also argue before the court that they should be given the opportunity to present evidence of intentional and systemic racial discrimination that has yet to be heard in court.

No matter how the Supreme Court rules, race and the death penalty will remain political lightning rods in the state.

No one knows that better than Hugh Holliman, the former Democratic House majority leader in North Carolina, who in 1998 attended the execution of the man who raped and murdered his teenage daughter.

Eleven years later, Holliman voted for the Racial Justice Act. He was defeated the next year by Republicans who portrayed him as soft on crime.

He has no regrets about his vote. “I supported the death penalty, but I wanted it to be fair," Holliman said.

Correction: A previous version of this story incorrectly described a white juror with a DUI conviction in the 2001 trial of Quintel Augustine. The juror was considered acceptable according to a prosecutor’s notes, but was not selected.