Unlocking The Vote In Jails

The majority of the 745,000 people held in local jails can vote, but few do. Advocates say it’s voter suppression on a national scale. 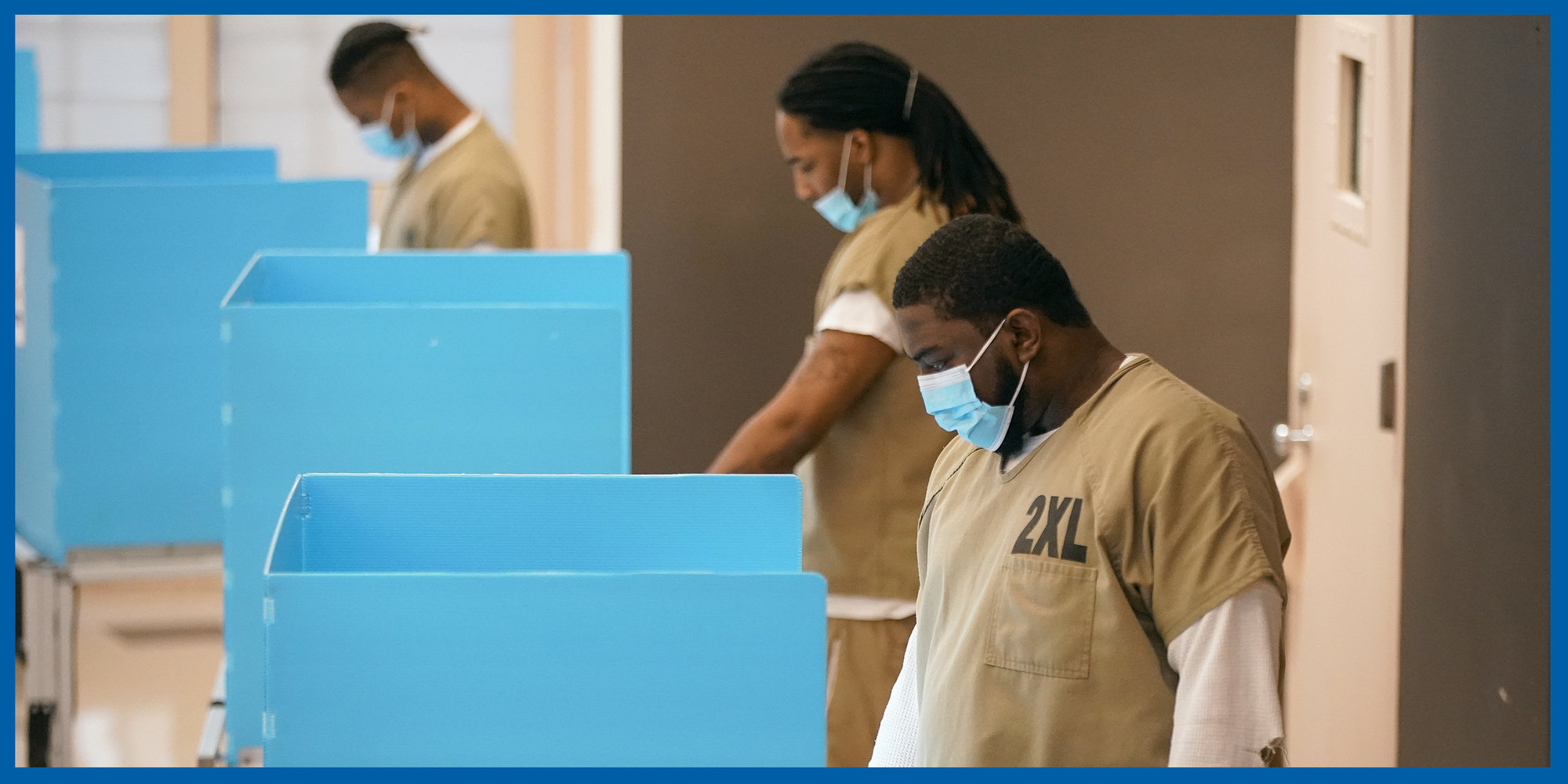 Cook County jail detainees cast their votes after a polling place in the facility was opened for early voting on October 17 in Chicago. Nuccio DiNuzzo/Getty Images
By Nicole Lewis and Aviva Shen

In June, Tina Kingshill and a team of volunteers fanned out into Harris County Jail, a sprawling multi-building complex in downtown Houston. Clad in face masks, the team worked their way through the housing facilities, slipping vote-by-mail applications to detainees through a slot in the thick metal cell block doors.

The Marshall Project partnered with Slate to conduct the first-of-its-kind political survey of people in prisons and jails around the country. Read more about what interventions they say might have kept them from landing behind bars and excerpts from the responses.

The pandemic had shut visitors and other volunteers out of the jail in March. But in June, the sheriff invited Kingshill and her team back, so they could continue their work making sure people in the jail can vote. This year, they have registered more than 1,000 people in the jail and have passed out more than 580 absentee ballot applications.

Across the country, volunteers and community organizations are working around the clock to make sure people in jail will be able to vote in this election. They’ve built alliances with county sheriffs, county clerks, and local election boards. When the pandemic barred outsiders from entering the jails, they came up with creative ways to continue their work. Organizers in Michigan, for example, convinced some jail officials to play a PSA about voting on the jail’s closed-circuit televisions.

There’s been a groundswell of support for laws restoring voting rights to people coming out of prison. But the vast majority of the 745,000 people held in local jails never lost the right to vote, since they are awaiting trial or are convicted of misdemeanors. Still, voting from jail is rare. Felony disenfranchisement laws and misinformation lead many people in jail to believe they cannot vote. Most jails don’t actively provide the necessary information to get people registered, voting rights advocates say. Logistical challenges abound. And this year, with some courts closed due to COVID-19, many more people could find themselves sitting in jail on Election Day.

Many of the people working to unlock the vote in jails say the result amounts to voter suppression on a national scale. People in jail also disproportionately come from communities of color that are heavily policed. The overexposure to the criminal justice system weakens these communities’ political power and makes people less likely to vote, now and in the future, research shows.

“We do start to think about those neighborhoods losing more voters than others,” said Ariel White, a political science professor at the Massachusetts Institute of Technology. “And that concentration really starts to matter in, for example, local elections,” which can sometimes hinge on a few hundred votes.

Moreover, people in jail have firsthand knowledge of the inner workings of the criminal justice system, but many are unable to hold the system’s elected officials—sheriffs, judges, and prosecutors—accountable on Election Day.

Because jails are under local control, voter outreach efforts vary by county.

In Michigan, the Voting Access for All Coalition held a webinar for county clerks to find ways to register jailed voters across the state. They’re hoping to reach 5,000 people.

San Diego’s Pillars of the Community, a faith-based criminal justice advocacy group, started paying detainees an hourly wage to help get out the vote and report any barriers to voting after the sheriff denied access to the jail.

Cook County is an outlier. For one, it is the only jail in the country with in-person voting. And more importantly, Sheriff Tom Dart, who oversees the jail, has been an ally from the start, according to the directors of Chicago Votes, which has been registering people at the jail since 2017. Dart says that bringing voting booths into the jail isn’t a matter of legislation as much as it is a matter of will.

“I cannot conceive of one legitimate reason why you can’t do this,” he said. “Security issues? Oh come on. Give me a break. The vast majority of the people in my custody are charged with horribly violent offenses. So when people say, ‘Security this, security that,’ I say, ‘You walk me through the challenges you have that I don’t have.’ ” 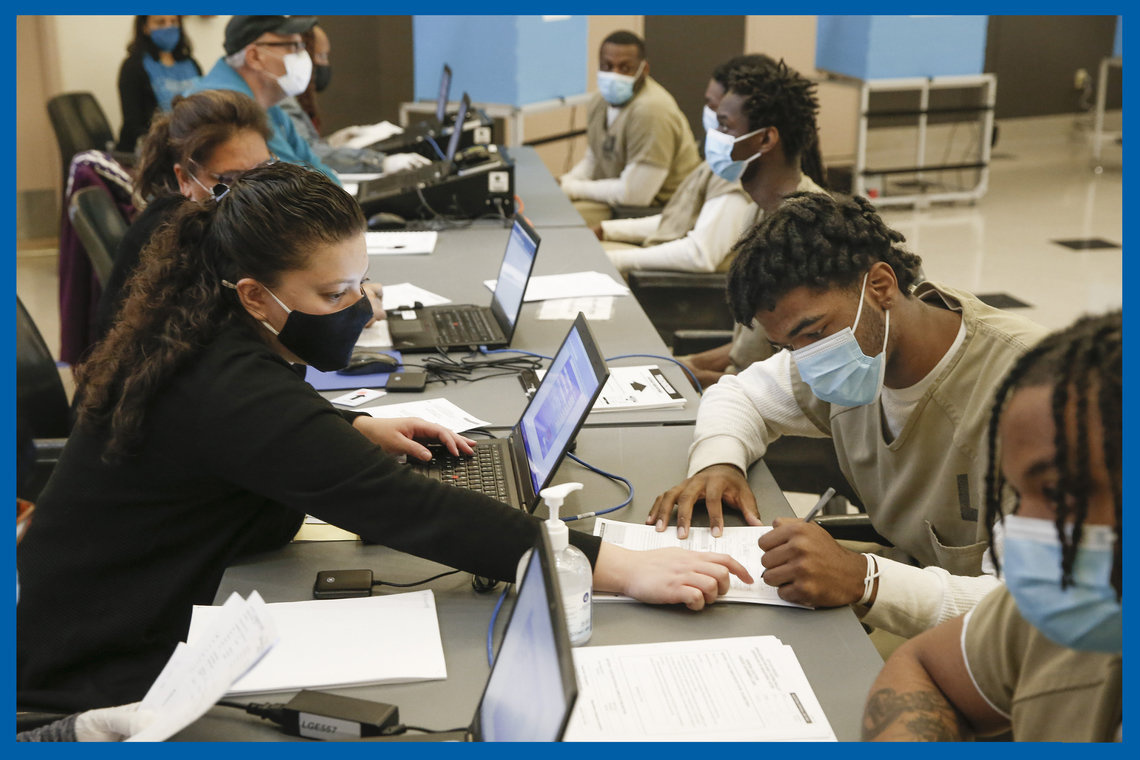 Some detainees in the Cook County Jail are getting the opportunity to participate in early voting in a presidential election for the first time.

But Dart’s attitude is not the norm. Statewide initiatives to measure the scope of jail-based disenfranchisement have found that many jail officials don’t provide detainees with any information about voting at all.

In July, the Arizona Coalition to End Jail-Based Disenfranchisement surveyed all 15 counties in the state to understand their procedures for jail-based voting. Only one county provided sufficient information for detainees to register and vote. The vast majority had no documented voter education or registration procedures at all. The coalition estimates that 8,400 of the roughly 14,000 people in jail are eligible to vote.

A similar pattern emerged in Wisconsin, where the ACLU and a voting rights nonprofit, All Voting Is Local, surveyed the state’s 72 county jails. Of the 68 counties that responded, only one offered people in jail detailed guidance on the voting process. The rest either provided vague guidance or no guidance at all, according to the report. Roughly 13,000 people are jailed in Wisconsin.

Misinformation and fear are potent barriers: Many in jail fear that if they vote they could be violating the law and end up with more jail time. Other barriers are logistical. Most states require proper identification and a home address in order to register to vote. But most jails confiscate driver’s licenses during the intake process. And some detainees don’t have a steady address or struggle with homelessness.

Those working to register people in jail have come up with some creative solutions. In Cook County, detainees can put down the jail’s address as their home address. And in Houston, detainees can use their jail-issued identification when filling out their voter registration. Homeless detainees can indicate the intersection or underpass where they sleep in lieu of a home address, and the clerk’s office will make sure they’re placed in the correct district.

The legal landscape protecting voting rights for people in jail is well-established. In 1972, several people awaiting trial in a New York jail sued the county sheriff alleging that they were denied the ability to register and vote by mail. At the time, state law barred people in jail from requesting absentee ballots. Their case made its way to the U.S. Supreme Court, where the justices ultimately sided with the detainees, affirming the right of jailed citizens to vote absentee.

Yet protections for voters in jail aren’t reflected in most state laws. Many states make accommodations to ensure people temporarily confined to nursing homes or hospitals can vote, but few make the same adjustments for people in jails.

Detainees have filed numerous lawsuits to protect their voting rights. But these lawsuits are rarely proactive: Most are filed after they haven’t been able to vote. The detainees must also clear a high hurdle to get their cases in front of a judge, first exhausting all internal remedies or risk having their lawsuits thrown out.

To Dana Paikowsky, who works with the Campaign Legal Center, a nonprofit organization dedicated to expanding voting rights nationwide, the exclusion of detainees raises larger questions about what it means to have a well-functioning democracy.

“People who are educated and have money disproportionately participate in elections,” Paikowsky said. “We should hope that our system doesn’t just want those voices. They should want other voices that may have more critical things to say about how our government is working.”

Marc Meredith, an associate professor of political science at the University of Pennsylvania who studies felony disenfranchisement, noted that it should be particularly worrying that the bulk of people being booked into jail are in their late teens or 20s and may well come out of the experience less likely to vote or be civically engaged. “This is going to have some long-term consequences on voting over the rest of their lives,” he said.

MIT’s White has found that even a short stint in jail makes someone less likely to vote in the future. Many Black and low-income people primarily experience the government through the criminal justice system—through stops by police or incarceration—and can become cynical about their power and role in politics.

Clarifying requirements for who is and is not eligible to vote would make it easier for people to understand their rights. But there’s another solution, experts say: incarcerate fewer people.

“One big possible change we could make would be to use jail a whole lot less, both when people are awaiting trial and in sentencing,” White said. “We might think about changing things like the structure of our bail system and how often we really sentence people to jail for misdemeanors.”

Christopher Jackson had no idea he was allowed to vote while he was incarcerated at the San Diego County Jail. Until an organizer from Pillars of the Community reached out and asked him if he’d like to get paid $17 an hour to register voters inside the jail, he had just assumed he and those around him couldn’t vote.

Though he was forbidden from advocating for one candidate or another, Jackson explained to the other prisoners why local races mattered. They could vote for the new mayor, City Council members, and, particularly relevant to the people he was recruiting, new judges. “Once we broke it down to them, they understood how, not only it affected them, but it also affected their families,” he said.

Laila Aziz, operations director of Pillars of the Community, estimated Jackson registered 200 voters over the few months he was incarcerated. Like him, a lot of people were surprised to find they were eligible to vote. But it wasn’t hard to convince them to register.

“They don’t know that their voice counts,” Jackson said. “But once you tell them, it’s all: Yeah? OK, well count me in.”